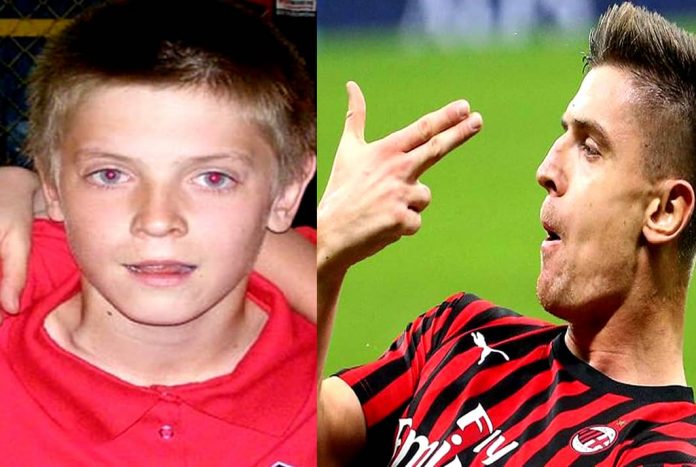 In the nutshell, this is a Life Story of Piatek. We begin from his boyhood days, to when he became famous. To whet your autobiography appetite, here is his childhood to adult gallery — a perfect summary of Krzysztof Piatek’s Bio.

Yes, everyone knows of his prolific goal-scoring form and gunslinging celebrations. More so, that he is flattered by fans’ comparisons with a star compatriot Robert Lewandowski. However, only a few consider our version of Krzysztof Piatek’s Biography which is quite interesting. Now without further ado, let’s begin.

For Bio starters, he bears the nickname “The Gunslinger“. Krzysztof Piątek was born on the 1st day of July 1995 at the town of Dzierzoniow in Poland. He was born to his little known mother and father, Władysław Piątek.

Did you know that the Polish national is of Lechitic ethnicity with European family origins? More interesting is the fact that he was raised at Nicemza, a village in Dzierzoniow where only two football fields exist because the most practised sports in the locality are swimming and bocce.

Notwithstanding, Krzysztof Piatek’s family have been football lovers. Young Piatek grew up loving football, a sport he began playing at the age of two. What more? he was a boyhood fan of Arsenal FC who liked Arsene Wenger’s style of play and admired legends like Dennis Bergkamp and Thierry Henry.

Piatek began his career buildup at Niemczanki Niemcza. It was with the club’s children group that the young ‘Gunslinger’ trained for a brief period before moving to local club – Dziewiątka Dzierżoniów in 2006.

While at Dziewiątka Dzierżoniów, Piatek was much invested in enjoyable training such that he spent the most years of his youth career (2006-2011) with the club before joining major local club Lechia Dzierżoniów.

Although Piatek was only a 15 year old when he joined Lechia Dzierżoniów, he exhibited good scoring form that made his youth managers contemplate featuring him with the club’s senior side.

He was a teenage sensation at Lechia Dzierżoniów. Image Credit: Przegladsportowy.

However, It wasn’t until the football prodigy was aged 17 that he made his senior debut with the club during the 2012–2013 season and went on to become a valuable asset for Polish professional clubs Zagłębie Lubin (which he helped gain promotion) and Cracovia.

2018 was the year which Piatek had a turning point in his career as he was signed by Italian side Genoa from Cracovia. Like a hungry wolf set loose to hunt, Piatek quickly set about conquering Italy with goals after goals in the Italian cup and league.

He became a scoring sensation in no time and was loved by many Italians. Children were not left out as they began to imitate Piatek’s goal gesture while his market valued soared in astronomical proportions.

By the end of the 2018/2019 season, Genoa – which signed Piatek for €4 million – had reasons to smile to the bank as they sold him to Milan for a largely profitable fee of €35 million! As expected, Piatek went on to give Milan value for their money and served as the perfect replacement for Gonzalo Higuaín who joined Chelsea. He even got a standing ovation for scoring twice during his second appearance for Milan in a 2-0 2019 Coppa Italia quarter-finals victory against Napoli.

Fast forward to the time of writing this bio, English side Tottenham is perfecting plans to sign the sensational forward as their striking force has been weakened by an injured Harry Kane. The transfer is expected to go without hitches given the fact that Piatek had in recent times been reduced to a back-up for Zlatan Ibrahimovic, a development which robs him of playing time and dampens his morale.

Away from Krzysztof Piatek’s breathtaking career life, he has an amazing love life that is made beautiful by his girlfriend turned wife Paulina Procyk. Paulina is not just Piatek’s wife but a blogger, fashion influencer on Instagram as well as a lawyer.

With such an amazing profile, it is not surprising that Piatek made Paulina his girlfriend for over 5 years before tying the knot with her on the 1st of June 2019. The couples’ relationship has not given rise to the birth of any child – at the time of writing – neither do either of them have son(s) or daughter(s) out of wedlock.

Football talents don’t spur up overnight. They are like Piatek, raised by a supportive family. We bring you facts about Krzysztof Piatek’s family life starting from his parents.

About Krzysztof Piatek’s father and mother: Władysław Piątek is Piatek’s supportive dad while not much is known about the footballer’s mom who is reportedly late. Władysław is widely known in Italian and Polish football as not just one of Piatek’s parents but a staunch promoter of the forward’s interests in soccer. Piatek credits his parents for constantly admonishing him to work hard, make his dreams come true and at the same time, keep his feet on the ground.

About Krzysztof Piatek’s siblings and relatives: Krzysztof Piatek might be the only child born to his parents as there are no records of his siblings, neither has he talked about a brother or sister during interviews. Similarly, there is not much about the forward’s ancestry and family roots, particularly the identities of his maternal and paternal grandparents while his aunts, uncles, nephews and nieces are yet to be identified at the time of writing this bio.

What makes Krzysztof Piatek tick and of what nature is his off-pitch personality? this is an opportune moment for you to feast your eyes on texts that do not only reveal facts about the striker’s persona but help you get a complete picture of him. To start with, Krzysztof Piatek persona reflects traits exhibited by individuals guided by Cancer Zodiac sign.

He is ambitious, emotionally intelligent, resilient and moderately reveals facts about his personal and private life. The Forward’s interests and hobbies include listening to music, playing video games with his wife Paulina Procyk, watching movies, travelling and spending good time with his family and friends.

Moving on to Krzysztof Piatek’s spending habits and money-making endeavours, he earns considerably well in salaries and wages for playing top-flight football while endorsements form an additional stream to his net worth that is under review at the time of writing this bio.

Notwithstanding, Piatek lives a luxurious lifestyle to its fullest as evident in his capacity to spend holidays at expensive resorts. Although the value of the house or apartment he lives in Italy is yet unknown, he possesses luxury rides cars and sometimes gets driven by chauffeurs.

To wrap up our Krzysztof Piatek childhood story plus biography, here are untold or lesser-known facts about the Striker.

About Giovani’s nickname: There are just a few players whose nickname are in sync with their style of celebration and Piatek is one of them. The forward was nicknamed ‘The Gunslinger’ because he performs a Wild West celebration gesture of gun-firing whenever he scores.

Smoking and drinking: Krzysztof Piatek is not giving to smoking at the time of writing this bio. However, he drinks responsibly with teammates, friends and family on special occasions.

Tattoos: Like Giovani Lo Celso, Krzysztof Piatek has no tattoos at the time of writing. However, there is no ruling out the fact that he might acquire body arts when his popularity soars to unimaginable heights.

Religion: Yes, Krzysztof Piatek has seemingly tough names which make it makes it difficult to figure his religion. Although his wife Paulina possesses a Christian name, BUT it is not certain whether Krzysztof Piatek’s parents raised him in Christian religious faith.

FIFA ratings: Do you know that Krzysztof Piatek has a fair rating of 82 on FIFA 2020? the ratings are set to increase given that the striker is not one to lose form especially as his imminent move to one of the world’s most competitive leagues draws near.

FACT CHECK: Thanks for reading our Krzysztof Piatek Childhood Story Plus Untold Biography Facts. At LifeBogger, we strive for accuracy and fairness. If you find something that doesn’t look right, please share it with us by commenting below. We’ll always value and respect your ideas.