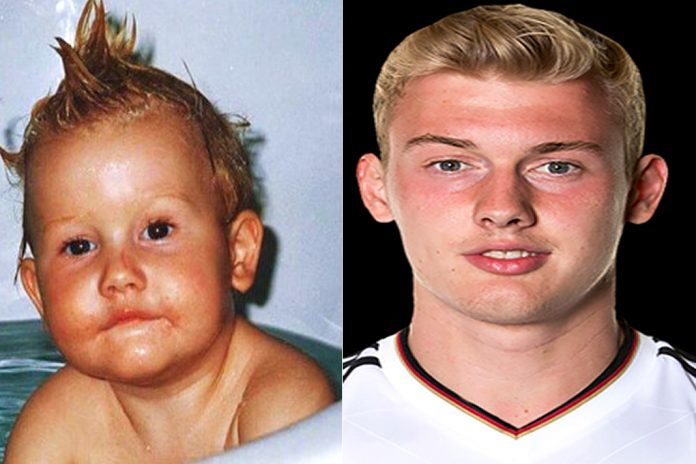 Our version of Julian Brandt’s Childhood Story, including his Untold Biography, brings you a full account of notable events from his boyhood days to when he saw fame.

The analysis of the German Football star involves his life story before fame, relationship life, family background and many OFF-Pitch facts (little known) about him.

Yes, everyone knows he displaced Leroy Sane in the 2018 FIFA World Cup Selection by Joachim Low.

However, only a hand few fans know much about Julian Brandt’s Bio which is quite interesting. Now, without further ado, let’s Begin.

For Biography starters, Brandt was born on the 2nd day of May 1996 to his mother, Heike Brandt (a housekeeper) and father, Jürgen Brandt (a football manager) in the city of Bremen, North-West Germany.

Julian Brandt was born into a prosperous family background. He was raised in Bremen, Germany, along with his look-alike brothers Joscha Brandt and Jannis Brandt, pictured below.

Did you know?… Julian Brandt family is made up of footballers and dominated by males. Just like their elder brother Julian, the two Brandt brothers pictured above all played football during their childhood days.

Julian Brandt’s father, Jürgen Brandt who was a former SSV Vorsfelde striker is currently a coach of German six-tier team SC Borgfeld (Transfer Market Report). Jürgen despite his managerial commitment, acts as an agent to his sons.

Who is Emily? Julian Brandt’s Lover:

Behind every great man, there’s a great woman, or so the saying goes. And behind almost every member of the German golden generation, there’s a glamorous girlfriend.

Knowing Julian Brandt’s personal life off the pitch helps build a complete picture of him.

Julian Brandt’s Girlfriend’s name is Emily, who is pictured below with her man in front of the evening skyline of Hamburg.

Before their relationship started, Julian Brandt enjoyed a long period of singlehood because of his focus on building his career rather than a relationship.

The fact that there is no information related to his past love life or girlfriend suggests his first relationship is with Emily.

To start with, Julian Brandt’s parents, including his brothers, are all Practical and well-grounded. On a more personal note, Julian is someone who loves to harvest the fruits of labour.

Julian Brandt is reliable, patient, practical, devoted, responsible and stable. He is sensual, tactile and considers both touch and taste as the most important of his senses.

More so, he is stable and conservative. His hobbies include playing football, watching movies (TV Series) and playing FIFA.

On a final note on Julian Brandt’s Personal Life, he is known to fear sudden changes in his career performance, relationship complications and insecurity of any kind.

Brandt was passionate about playing football from his childhood days and started his early career, joining the youth system through SC Borgfeld in the year 2001 at the age of 5.

He spent a total of 9 years at the club, outgrowing every youth rank.

Below is a photo of Julian Brandt during his later years at his hometown club SC Borgfeld. 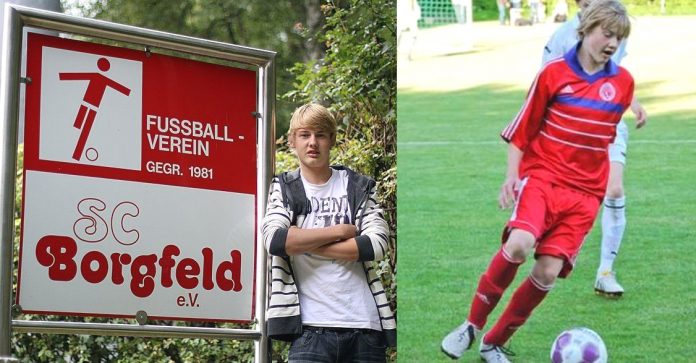 Brandt in a bid to face more exposure and get more experience, decided to leave his hometown club in 2009.

After successful trials, he got accepted at FC Oberneuland, playing for the club for two years (2009 to 2011) and making a name for himself.

After achieving so much, Brandt wanted a smooth finish to his youth career at a top flier German club. This led to a switch from FC Oberneuland to VfL Wolfsburg.

At the club, he plundered 27 goals in 48 games over two seasons. That feat saw his side winning the youth league. This saw an end to his youth career in 2013. The rest, as they say, is now history.

As of 2028, he did stand out among so many other rising German youngsters. Julian Brandt was, without a doubt, one of the world’s most promising wingers.

Strengths: Julian Brandt is a two-footed speed merchant which is the prerequisite of a modern-day forward. He is excellent in tight spaces and, most importantly, stronger than his soft looks.

Weaknesses: Brandt himself has recently acknowledged that his “defensive work and heading ability” are areas he really needs to improve.

FACT CHECK: Thanks for reading our Julian Brandt Childhood Story, plus untold biography facts. At LifeBogger, we strive for accuracy and fairness. If you see something that doesn’t look right in this article, please place your comment or contact us!