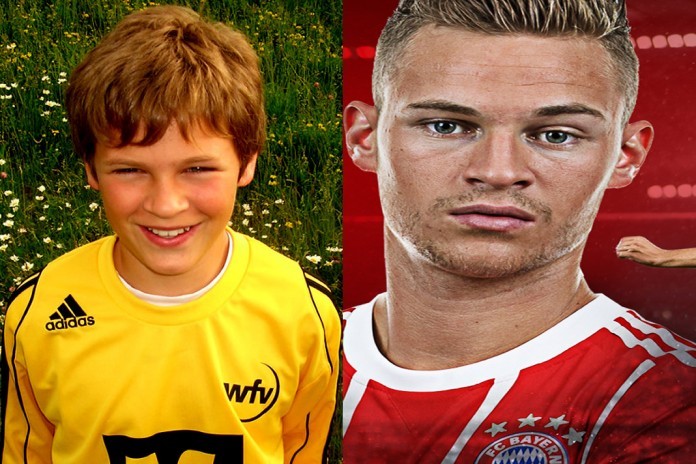 Lifebogger presents the Full Story of a Football Genius best known by the nickname; “Mr Versatile“.

Our Joshua Kimmich Childhood Story plus Untold Biography Facts brings to you a full account of notable events from his childhood time to date.

The analysis involves his life story before fame, family life and many OFF-Pitch facts little known about him.

Yes, everyone knows about his on-pitch tactical intelligence. However, only a hand few fans know much about Joshua Kimmich’s Bio which is quite interesting. Now, without further ado, let’s Begin.

For Biography starters, he bears the full name; Joshua Walter Kimmich. The German footballer was born on the 8th day of February 1995 in Rottweil, Germany. He was born to his mother, Anja Kimmich and father, Berthold Kimmich.

Joshua Kimmich was born shy and quiet, but on the other hand, could be eccentric and energetic, as observed by his parents.

Ideally, he had a smashing start during his childhood life. Kimmich grew up in the small village of Bösingen, which is located between the Black Forest and Baden-Württemberg’s capital Stuttgart.

Bösingen is a typical rural village where emptiness ends for little boys when there’s a football at every little boy’s feet.

With no more than 1,700 inhabitants and along with the other boys in the village, football became a regular hobby for Kimmich.

Back then, Kimmich would practise in front of his home garden and backyard. As he did that, one and then too many windows would get smashed by his wayward football kicks.

Surprisingly, his parents never worried about their son’s destructive tendencies.

Instead, they sorted out an alternative solution while replacing every single broken glass shattered by their son and his friends. As Kimmich puts it;

“One day, I came home and found two regulation soccer goals in the front yard,”

‘The local football club didn’t need them anymore, and my parents had taken them off the team’s hands.

My dad pointed to the plot of unused private land across the street and said to me and my friends; boys, go over there and enjoy your football!!.’

Joshua Kimmich, playing football with his friends in the new park opened a new chapter in his life. This made his ambitions of becoming a footballer just a passing fancy.

Back then, Kimmich would look to emulate some of his early idols, among them including; Zinedine Zidane, Bastian Schweinsteiger and Tomas Rosicky.

These were the only three of the names he had on the back of replica shirts. Looking at the roles these idols played could easily help one suggest the role Kimmich preferred to assume out on the field.

Kimmich’s passion for football saw him enrol on the roster of a local youth team, which gave him the stage to showcase his talents.

A defining moment came when the team played against the youth team of Stuttgart.

“The local club was the club  many other professional players had gotten their start,”

“During the match with the stuttgart youth team, I scored all the three goals against them and we won 3-2.”

This, indeed wasn’t a bad way to get noticed. Immediately after the match, scouts including that of Stuttgart started circling Kimmich like sharks in a bid to obtain his signature with Stuttgart leading the way.

The ultimate decision was left to Kimmich’s parents. They initially refused an invitation for him to start training with Stuttgart.

Mr and Mrs Berthold Kimmich however, changed their mind after the club’s youth team coach made a personal visit to their home to persuade them.

After spending several years travelling to and from Stuttgart several times a week, Kimmich began taking his first real footsteps in the world of football when he was welcomed into Stuttgart’s academy as one of only 18 annual recruits.

Kimmich, along with a friend, was the youngest new member brought into the VfB Stuttgart youth team. At the club, he was given all the menial tasks but never complained.

All through his youth career, he was always known to be the last one to leave the training pitch, a sign of the determination that he’ll make it.

This feat saw him improve and surpass his teammates’ ranks. However, It didn’t take long before Kimmich developed a versatile dimension of play thanks to his determined character. 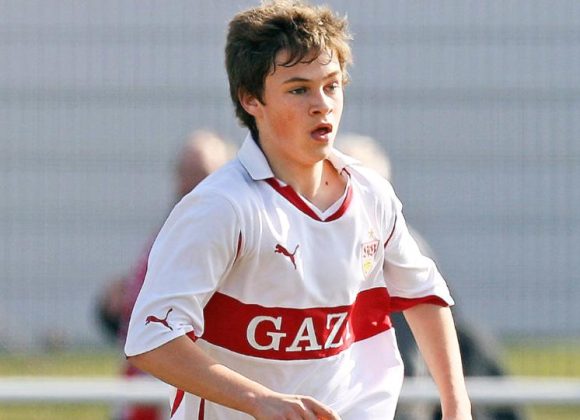 Joshua Kimmich Biography – The Set Back and Big Break:

A sad moment came for Kimmich when the coach that brought him in left the club to get bigger opportunities.

Kimmich’s quick development, coupled with his versatile displays for his youth club saw him in a quick transition from a youth to a senior player.

Unfortunately, he had a major setback. Kimmich, having seen himself as a grownup and outgrowing all youth ranks, made a request to play for VfB Stuttgart senior team.

His request being rejected brought him so much pain. According to his Stuttgart youth coach.

‘You’re not good enough, your body is not strong enough,’ 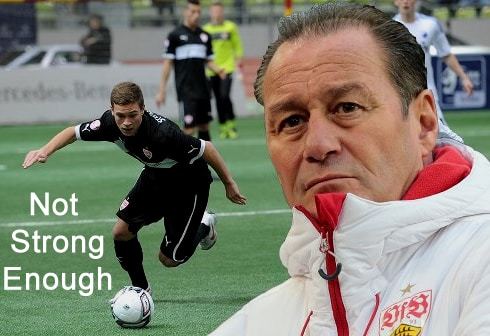 The new coach told him, adding that he needed another year with the VfB Stuttgart youth team. Kimmich once recalled that the decision got him heartbroken despite trying to hold himself from the hurt.

Instead of remaining in a sober mood, young Kimmich found solace. He drew strength by deciding to seek his fortune elsewhere.

Fortunately, it just so happened that his beloved former youth coach, who had lured him to Stuttgart, had since moved to RB Leipzig, and he wanted him there. Kimmich once recalled…

“I just thought, I have this chance and I have to take it!!”

At Leipzig, he was part of an extremely attack-minded team in which his ball-winning qualities in front of a high-back four shone through. 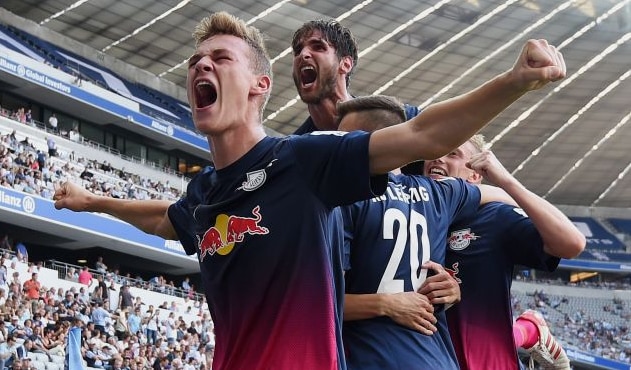 Due to his young dominance, Kimmich got an opportunity to join Bayern in 2015 with Pep Guardiola, seeing through his transfer personality. On account of meeting Pep, Kimmich said…

“I sat down in a conference room at Bayern’s offices waiting to meet Pep Guardiola. All I knew about Pep was from what I had seen on TV. I was so nervous, but as he walked in, I felt it right away — that trust. And immediately I knew: I wanted to play for Bayern. Pep spoke to me about my strengths and my weaknesses, and how he wanted to help me be come a better player by learning a different style of play. ‘I want you on this team,’ he told me. That’s a moment I will never forget. Since then, he became a father figure to me.” 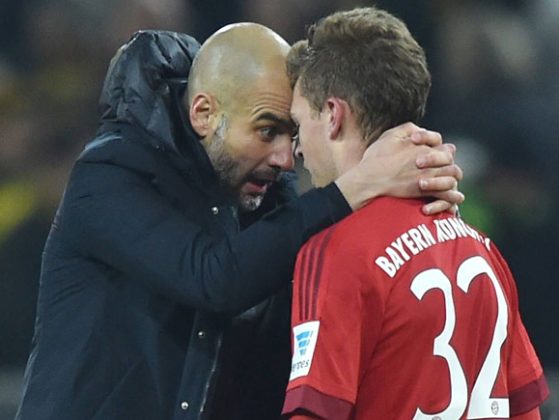 Coping with the stress of football by creating a lifestyle off the pitch builds up a complete picture of Kimmich.

His relationship with Lina Meyer, pictured below, has played a vital role in the process of building a happy life for himself.

Lina was born in Bad Bevensen, a town in the district of Uelzen in Lower Saxony, Germany. She studied law at the university.

Kimmich met his pretty girlfriend, Lina Meyer while he played for RB Leipzig, where she worked at. They both started as best friends and later became lovers. 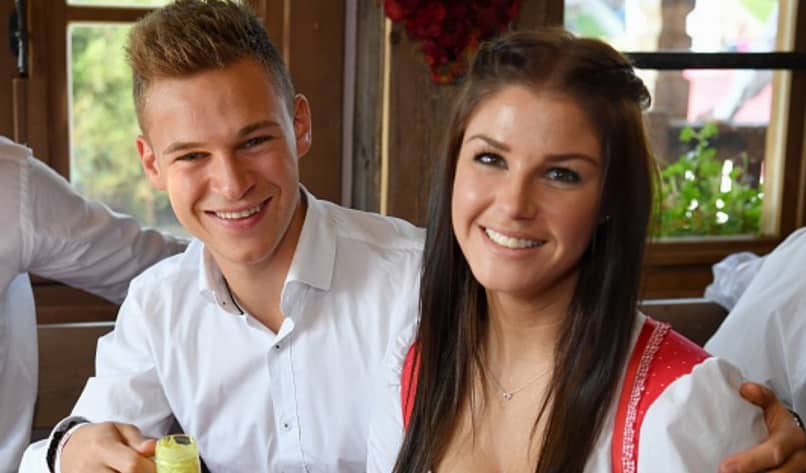 Kimmich’s footwork and determination to succeed on-pitch is being constantly refuelled by ever-beautiful Lina.

By looking at both lovers below, fans would find it difficult to believe that Lina Meyer is three years older than her boyfriend. 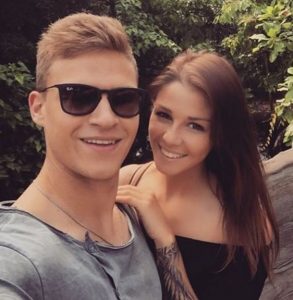 Thanks to her beauty, Lina has become a favourite amongst German WAGs.

This section of our Biography tells you more information about Josh’s parents. So, without further ado, let’s begin.

Below are Kimmich’s proud parents Anja and Berthold at their son’s award night for the title of the most popular athletes in the district of Rottweil, their hometown. 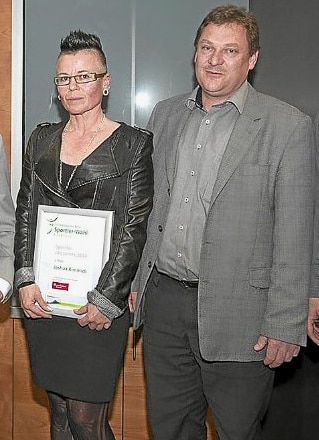 He is credited for being a father who delivers his own special “Pep Talk” to his son, thus making him more courageous and enthusiastic. This he has done, to the amazement of onlookers as seen below. 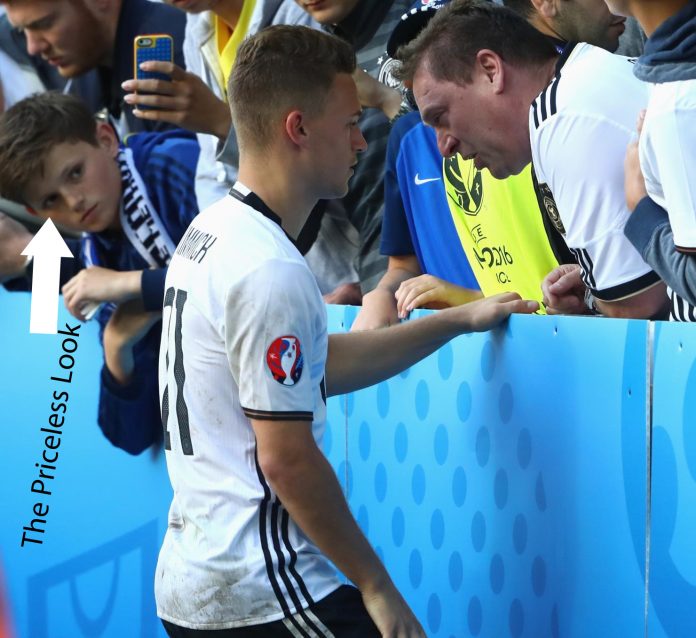 Both parents, especially his mum, Anja Kimmich, miss their son more each time he is away for football commitments. Both mother and son bonding is agelong, as seen in the photo below. 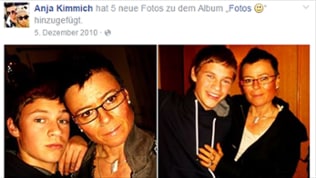 Anja talks with Joshua on the phone a lot. Much of what is discuss entails Anja giving her son instructions and cooking tips. She is responsible for naming her son ‘Joshua’ who is the servant of Moses from the Old Testament of the Bible.

While his parents stay far away from him, Debora Joshua, his sister, stays much closer. Debora lives in Munich in a shared flat rented by her brother.

Two years ago (from the time of writing this Bio), Debora was an undergraduate student in Munich. She is the reason why his brother wants to further his education at some point in his football career. 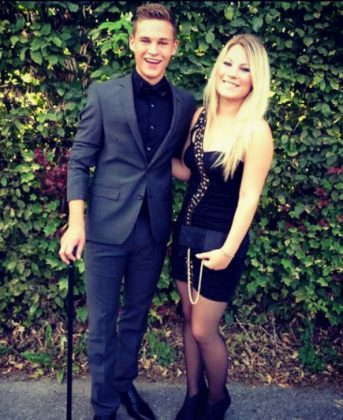 Kimmich graduated with a grade of 1.7. In addition to football, Kimmich wants to study, preferably business administration at some point in his career.

Debora, his sister, is known to have pretty long blonde hair and a well-toned body. She is always at the stands supporting her brother. 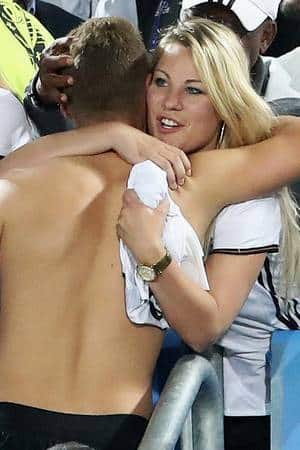 UNCLE: Joshua Kimmich has an Uncle named Walter who, just like him, is also a star in the family. With the band “Brillant”, Walter is a successful pop singer.

This he does in order to restore his strength and have a career reflection. He looks at the football pitch as a place full of possibilities.

His position on the pitch, for both club and country, has drawn comparisons with Bayern and Germany legend Philipp Lahm. 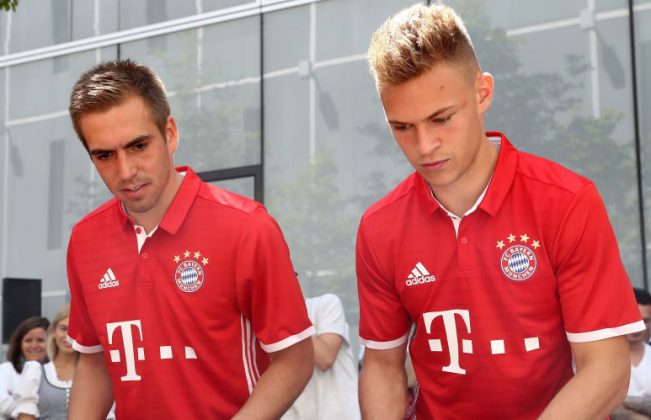 Despite the accolade, Kimmich has attempted to distance himself from the Lahm comparisons, emphasising his desire to “go his own way” in his career. Unfortunately for him, it appears the comparisons will not go away in a hurry because it’s going in his favour. Now here are other comparisons;

The simple summary is that Kimmich is not a Lahm BUT a Lahm-Müller hybrid. He is indeed a “veritable Swiss Army knife of a player”.

Thanks for reading our Joshua Kimmich Childhood Story, plus untold biography facts.

At LifeBogger, we strive for accuracy and fairness in our quest to deliver you German Football Stories. The Life History of Jamaal Musiala and Nico Schlotterbeck will excite you.

Be the
First to Comment!
kimmich always be kimmich