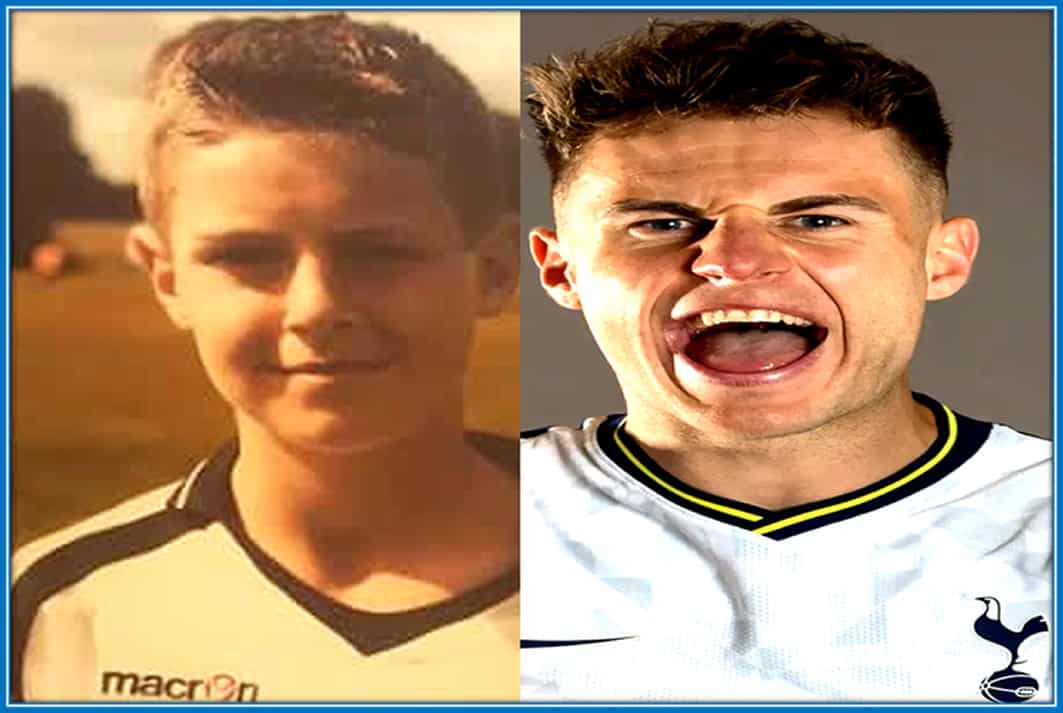 Our Biography of Joe Rodon tells you Facts about his Childhood Story, Early Life, Parents, Family, Girlfriend/wife to be, Cars, Lifestyle and Personal Life.

In the nutshell, this is an engaging presentation of his journey from the early days, to when he became famous.

To give you a taste of the engaging nature of our memoir, here is his post-cradle to fame gallery — a pictorial summary of Joe Rodon’s Bio.

Yes, you and I know he has proved his worth to Jose Mourinho thanks to a scintillating Spurs debut.

Despite the accolade, we’ve realized that only a few are knowledgeable of Joe Rodon’s Life Story. We’ve prepared it and quite engaging. Without further ado, let’s begin.

For Biography starters, he bears the nickname Roblock. Joseph Peter Rodon was born on the 22nd day of October 1997 to his mother, Tania Rodon and father, Keri Rodonat at Llangyfelach village, in Swansea, Wales.

The Welsh footballer is the second son of two children born of the union between his parents, who look like in their 50s.

The defender grew up in his birth village alongside an older and only brother, Sam.

Llangyfelach is a repository of his fun-filled childhood memories — in virtually any facet of growing up, including enjoying football. Behold, an aerial view of where he grew up in.

Born into a family with a rich sporting history, it was really hard for him not to become sporty.

The Llangyfelach native wanted nothing else than football, and his middle-class family were more than happy to see him succeed at it.

Like Gareth Bale, Roblock has his family roots deeply rooted in Wales. There wasn’t any doubt that he would represent the Celtic nation in international football.

Wales is all he’s got, and he consequently has the best interest of Welsh people at heart.

The centre back took his first step in competitive soccer with local club Llangyfelach. He was very much into the sport and possessed Swansea City season tickets at a very young age.

“I BEGAN PLAYING FOR LLANGYFELACH WHEN I WAS VERY YOUNG. MY OLDER BROTHER SAM WAS ALSO WITH THE CLUB AND IT HAS BEEN A GREAT RIDE AND EXPERIENCE SINCE THEN,”

When Sam joined Swansea, everyone could predict that his younger brother would follow suit. Rodon came aboard at age 8 and found purpose in soccer. According to him:

“UPON GETTING INTO THE YOUTH SYSTEM OF SWANSEA, THE DESIRE IN ME TO BECOME A FOOTBALLER GOT STRONGER. I WANTED TO DO IT FOR THE REST OF MY LIFE.”

Thus began his 10 years youth career at the academy which sits in the shadow of Liberty Stadium at Landore. The centre back’s rise through the ranks was seamless, ushering him to the class of extraordinary prodigies.

The soccer prodigy signed his first professional contract with The Swans in July 2015, but did not immediately get a first-team debut.

Instead, Joe paid his dues by going on loan to League Two side Cheltenham Town, where he got the requisite experience.

Upon returning to his parent club, Rodon got blessed with a senior debut ahead of the 2018–19 Championship season. Thankfully, he became a regular starter at the club until his transfer to Tottenham.

The 6 Feet 4 inch talent was relatively unknown until scouts from North London figured that he fits into Tottenham Hotspur’s plans. He joined the club in October and made his Premier League debut on the 26th day of October 2020.

Ever since he joined the Lilywhites, Rodon has shown that he has the talent, commitment and hunger to showcase himself in the Premier League.

Little wonder Jose Mourinho had faith in Rodon and named him as Eric Dier’s partner, filling in for the injured Toby Alderweireld despite Davinson Sanchez being available.

Rodon repaid Mourinho’s faith in him by helping Tottenham keep a clean sheet in a 0-0  draw against Chelsea and largely coped well with the in-form Tammy Abraham.

The 23-year-old has proven himself and can secure his spot in the centre back. Whichever way things tilt for him, the rest as they say (including his Video highlights) will be history.

Who is Joe Rodon’s Girlfriend:

Our boy is understandably without a girlfriend. Yes, no romantic partner that we can think of as of December 2020. We would not fault him because having no girlfriend has many advantages for the young talent.

It would enable him to help keep Tottenham’s title charge on track, solidify his spot in the team’s centre back among other benefits. The soccer star is biding his time. He has some very important boxes to check in the meantime.

For sporting matters, Roblock feels at home whether he is on or off pitch. He has his sporting family to thank for that.

Here, we’ll bring you facts about Joe Rodon’s parents. Also, we will make facts about his siblings and relatives.

Keri is the father of the football star. He is a one time Welsh International Basketball player. The supportive father also has interests in soccer and helped set Sam and Rodon’s paths in the sport.

Tania is Roblock’s mom. She was once the coach of Llangyfelach Primary School soccer team.

She was good with the kids who nicknamed her Dave Bassett (an English Football Manager). Her passion for the sport is intense, and she keeps tabs of Joe’s progress in it.

Our boy has just one older brother who goes by the name Sam. Like Rodon, Sam went through development at Swansea but never made it as a professional.

Notwithstanding, he loves the centre back and appreciates him for bringing fame to the family’s name.

Family history has it that Rodon’s maternal grandfather Peter was a onetime soccer professional. He played as a striker for Bradford in the mid-1960s before joining Merthyr.

Similarly, Rodon’s his maternal uncle Chris had a stint with Brighton while the Seagulls were in the old First Division in the early 1980s. He subsequently played for Cardiff City, Llanelli and Haverfordwest.

However, there are no records of the soccer genius paternal grandparents, uncles, aunts, cousins nephew’s and nieces at the time of writing this Biography piece.

Is his job all about defending and playing sharp, incisive passes? No! There is more to him than you know. Foremost, he is a gentle semi giant with a down-to-earth attitude.

Although the brown-haired player is a man of few words, the little that he speaks gives insights into the amazing content of his character.

He has interests in playing basketball like his Dad Keri once did. Joe loves swimming as one of his favourite hobbies, and wouldn’t hesitate to spend quality time with his family and friends.

The footballer’s net worth is under review at the time of putting up this engaging piece on his biography.

This is partly because he it hasn’t been long since he transitioned from 2nd tier football to the Premier League.

In fact, when Rodon arrived in London, he was ‘worth more’ than fee Spurs paid to secure his services. However, the press didn’t blow their whistles because he wasn’t famous.

Neither is Rodon weekly salary of £9,615 pounds or annual salary of £500,000 pounds befitting for a sensation that he is. Until his salary enjoys an upward review, we should not expect to see him Navigate the streets of London in exotic cars.

Estate managers should also refrain from showing him houses and other properties that he can’t afford until he negotiates a new contract.

To wrap up this piece on his Life story, here are little-known truths about him.

Fact #1 – Salary and Earnings Per Seconds:

Did you know?… the average Welsh citizen would need to work for 25 years to earn Joe’s annual pay with Spurs.

Since you started viewing Joe Rodon‘s Bio, this is what he has earned.

Regarding matters of faith, we can easily predict where Rodon’s loyalty lies. He is not Muslim, Buddhist, Hindus or some Tibetan monk. If Rodon is a believer, then he must be Christian.

He is just three point above Ethan Ampadu’s 67 overall rating and 10 point below of fellow Spurs teammate Ben Davies. The truth is, he is underrated.

Standing at 6 feet 4 inches, Rodon arguably has the best height for his role. Fans of the Lilywhites believe the trait will ease Mourinho’s headache of opposition set-Pieces and we can’t agree less.

Thanks for reading this informative piece on Joe Rodon’s childhood story and biography. We hope it has inspired you to believe that luck happens when preparation meets opportunity. Just like a prepared Rodon ticked all of Tottenham’s boxes when they discovered him.

It behoves us now to commend the centre back’s parents for the sporty upbringing which made Rodon destined for the top.