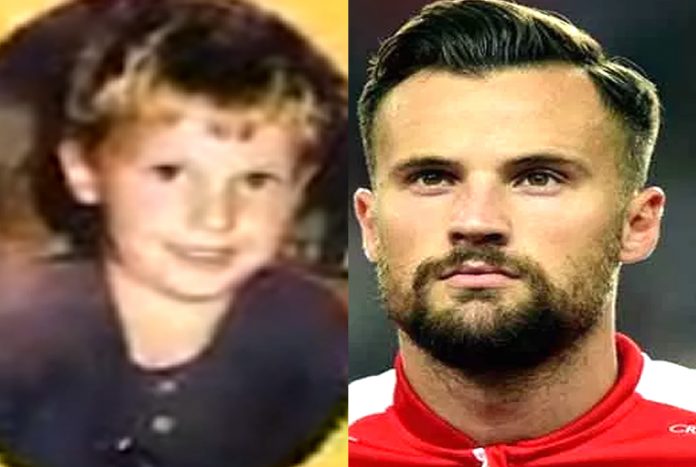 LB presents the Full Story of a Football Genius with the name “Haris“. Our Haris Seferovic Childhood Story Plus Untold Biography Facts brings you a full account of notable events from his childhood time to date.

Yes, everyone knows he is a prolific striker, one who is supremely-talented with an eye for scoring goals. However, only a hand few of fans consider Haris Seferovic’s biography which is quite interesting. Now without further ado, let’s begin.

Haris Seferovic was born on the 22nd day of February 1992 to his mother, Sefika Seferovic and father, Hamza Seferovic in Sursee, a municipality in Switzerland. Below is a photo of his lovely parents; his look-alike dad (Mustafa) and beautiful mum (Sefika).

Judging by their names (Mustafa and Sekina), you could tell that it is possible for Haris Seferovic’s parents to have come from a Muslim family origin or lineage.

His dad’s name Mustafa is an indirect Quranic name for which means “chosen”. It is one of the nicknames of the Islamic Prophet. On the other hand, his mother’s name “Sefika” has Turkish roots, a name which means “compassionate”.

Haris Seferović has his family roots NOT in Switzerland, BUT traced to a municipality and town called Sanski-Most, located in Bosnia and Herzegovina, formerly Yugoslavia.

Did you Know?… Haris Seferovic’s parents immigrated to Switzerland in the late 1980s, at the time the drums of WAR which brought fear was beating in Bosnia and Herzegovina.

The big decision made by his parents to leave the war-torn country was well orchestrated considering the fact that the war broke out on the 6th of April 1992, just two months after little Haris (pictured below) was born.

Early on as a child, young Haris Seferovic was gifted with the act of kicking a soccer ball. Growing up, he began his football escapades in his family living room, a feat which ignited his talent and love for the beautiful game.

Back then, Haris Seferovic’s parents knew their son was destined for great things as they watched Harris hone his skills both at home and at the Sursee football fields.

Ideally, having a football-loving and sport supporting parent, it is only natural for the beautiful game is instilled into him as a child.

Young Haris Seferovic continued to play football with confidence, forming the habit of overstepping his mark and doing things out of the blue with his soccer balls.

Seeing too much of this, he was advised by family members to enrol for football trials. When Haris bagged his first call-up to attend trials at local Sursee academy, his parent’s pride that knew no bounds.

Haris Seferovic’s passion for soccer saw him in the year 1999 passing trials and beginning his career with FC Sursee’s youth side, a club which gave him the opportunity to lay his career foundation.

He was quick to make an impression with the club as he outranked his teammates through the years with his abilities.

After five years of stay, Haris Seferovic in the summer of 2004 left the club for another Swiss club named FC Luzern. Again, he continued to grow quickly across the youth ranks during his three years with the club. This feat gave him a senior career start.

The year 2009 saw Haris making a name for himself. First, he was scouted and acquired by Swiss top tier club Grasshopper precisely on the 26th of April 2009.
Secondly and that same year, the teenager was invited to represent his country in the FIFA U-17 World Cup, a feat which brought immense among of joy to his household.

The FIFA U-17 World Cup which took place in Nigeria was the decisive competition for young Haris Seferovic.
Did you know… Haris Seferovic scored the winning goal against Nigeria in the final. This feat helped his team win the prestigious trophy.

Haris Seferovic didn’t stop there. He also went on to win the young footballer of the year award.

Just a year after the tournament, an ambitious Haris began to receive offers from popular clubs all over Europe. On 29 January 2010, Italian Serie A club Fiorentina signed him from a lesser known Grasshopper. On 11 July 2013, Seferović went on to join Spanish side Real Sociedad with hopes of having an impressive against Real Madrid & Barca.

Not getting what he wanted, he moved to German Bundesliga club Eintracht Frankfurt where he helped his team become a runner-up at the DFB-Pokal campaign.

Haris Seferovic finally found his rhythm when he joined Benfica, a club he became a legend thanks to his goal.

Did you know… Haris Seferovic once hit a record-breaking milestone around January 2019, the moment he temporarily became the top scorer across all leagues in the world.

His remarkable 2018/2019 season with Benfica saw him becoming high and mighty thanks to his 23 goals out of 29 appearances in the Portuguese league. Haris Seferovic went on to win the 2018.2019 Primeira Liga becoming the competition’s highest goal scorer.

Getting to know information about Haris Seferovic Love Story would help you get a complete picture of him. Starting off, behind every successful footballer, there exists a glamorous wife or girlfriend. This, in this case, is seen in the beautiful person of Amina.

Both Haris and Amina have for years enjoyed a solid relationship built first on friendship. As observed by the press, their love story took them from bestie status to one which represented true love.

Early 2019, both Haris and Amina decided to make a bold decision. Both lovers decided to have a lavish wedding in Switzerland. The timing of the wedding fit perfectly into Haris Seferovic super-successful season.

Asides spending time shooting at the beach, their glamorous wedding party which took place in Seferovic family home. As at the time of writing, Haris Seferovic currently enjoys the last days of holidays before getting back to work for the upcoming 2019/2020 season.

Also as at the time of writing, both lovers are currently expecting their first baby (expected September 2019) the pregnancy happened just immediately after the wedding.

Getting to know Haris Seferovic personal life away the pitch of play would help you get a complete picture of him.

Starting off, there is a saying that there isn’t any loyalty left in the modern game. This doesn’t take into account the relationships shared between Haris Seferovic and his dog.

Off the pitch, Haris Seferovic puts up a loyal, compassionate, artistic, intuitive personality. He is gentle and unconditionally generous to his partner, Amina.

For the most part, Haris Seferovic does often give money too much thought. Over the years, he has acquired several contracts with European clubs making lots of money in the process.

Haris loves to spent a lot of money with little thought. The evidence is seen in his expensive car. Speaking of cars, Haris Seferovic owns some of the most luxurious and expensive brands.

His favourite is the Porsche cars which has one of the best interiors in the automobile industry.

As at the time of writing, the net worth of the Switzerland striker has grown and remained from 6 to 7 digit figures. For Haris, there is always enough money for a normal life. His financial success is tied directly tied to his performance as a footballer.

The Seferovic family is currently reaping the benefits of having one of their very own bringing joy and happiness to their faces.

About Haris Seferovic Father: Hamza Seferovic was born and bred in Bosnia. Judging from online reports, he seems to have much influence in his son’s career decisions right from the early days. This feat has made both father and son become the best of friends.

About Haris Seferovic Mother: Sefika Seferovic is the mother of Haris Seferovic. Just like her husband Hamza, Sefika does not miss the opportunity to see Haris in action especially when playing for the national side. Below is a photo of her attending one of her son’s international matches.

Haris Seferovic Siblings: Haris Seferovic has a brother whose name is Adis Seferovic. Speaking to Swiss TeleTell, Adis said he was very proud of his big brother’s achievement and looks forward to emulating him. As at the time of writing, no information exists about Seferovic having any more brother or sister(s).

As at the time of writing, no information exists about Haris Seferovic having any more brother or sister(s).

Haris Seferovic Grandparents: It so joyful to see your grandparents still alive especially when you’ve made it in life. Haris Seferovic’s grandmum is still alive as at the time of writing. She is a huge fan of her grandson, a reason which brings more life to her old age.

His granny does no other work that read newspapers glorifying her grandson. Below is a photo of her giving with one of those sports bulletins.

Haris Seferovic Relatives: Haris has a niece whose name is Seila. According to reports, he appears very close to her just like his wife Amina.

Memorable Events that Year he was Born:

The year Haris Seferovic was born witnessed the release of some of the best films and show of the decade. That year 1992 saw Popular movies “Aladdin,” “Sister Act,” “The Bodyguard,”  and “Home Alone 2: Lost in New York” being released.

Did you know?… That year also saw “Barney & Friends” being premiered on television.

FACT CHECK: Thanks for reading our Haris Seferovic Childhood Story plus Untold Biography Facts. At LifeBogger, we strive for accuracy and fairness. If you find something that doesn’t look right, please share with us by commenting below. We’ll always value and respect your ideas.