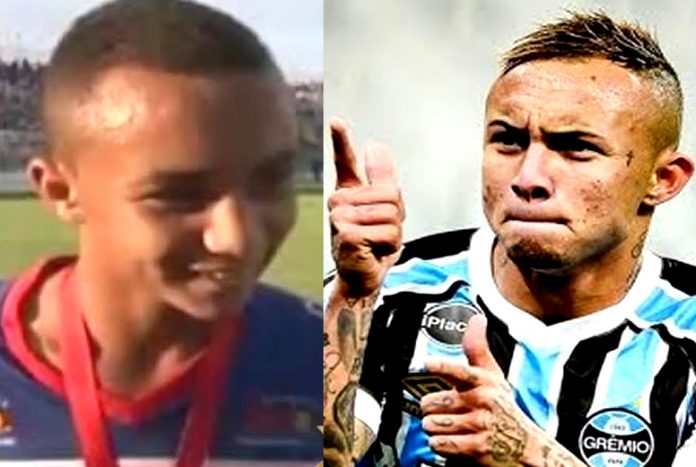 LifeBogger presents the Full Story of a Football Genius with the nickname “Little Onion”.

Our Everton Soares Childhood Story Plus Untold Biography Facts brings you a full account of notable events from his childhood time to date.

Yes, everyone knows he is a prolific striker with pace, skill, and finishing ability, as observed in the 2019 COPA America tournament.

However, not many soccer fans have read Everton Soares’ Biography, which is quite interesting. Now, without further ado, let’s begin.

For Biography starters, his full names are Everton Sousa Soares. Everton or Cebolinha, as he is popularly called, was born on the 22nd day of March 1996 to Brazilian parents in the municipality of Maracanaú, Brazil.

Born to a very humble family, Everton’s parents were lower-middle-class income earners who could only afford little for their entire household.

As a young boy, playing football started right from the age he knew how to walk.

Everton grew up in a municipality where millions of boys would lace up their boots every day hoping to take no other profession but seek to become professional footballers.

For him, it was all about becoming a footballer and wanting to give his family a brighter future.

The youngster, like other kids, looked up to and aspired to be like his huge role models- Kaka, Robinho, Ronaldo de Lima. He knew wanting to become a professional footballer can lead to a very successful and lucrative career.

Just like other Brazilian kids, the doors of opportunity got opened for him to play street football, which he did play in harsh conditions.

While Everton honed his skills playing football on the street, he never had enough monies to buy his own ball, so he made use of balls made up of old socks to play privately in his family home.

Everton continued honing his skills until he was 12, the age he got called to attend football trials at Fortaleza. Thankfully, his passion and determination to become pro saw him passing trials and enrolling with the academy.

As a teenager from a humble family, Everton faced a long commute to training sessions for his first club, Fortaleza Esporte Clube. This is a club based in Fortaleza, in the state of Ceará, Brazil.

“Everton came by bicycle. He would always cycle around 6km to reach the training ground.

He was always reserved, of few words, but always skilful.”

remembers Márcio Caetano, a former youth coach at the club.

Young Everton spent an hour moving to and fro on a 6km journey from his family home to the training ground.

His parents, even though there weren’t rich, were very supportive of their son’s quest to become professional. It was his father’s intervention that helped him get opportunities with the club.

For instance, there was a tournament where Everton didn’t play and his father came to the club to fight for his son’s inclusion into the tournament before the club gave him the opportunity, which came as a positive surprise. Everton came on the pitch and scored three goals in 30 minutes.

His speed and his aggression caught the eye of Grêmio scouts who were convinced they needed to sign the youngster. This event happened in the year 2012.

Signing the deal brought before him as a teenager would mean moving 3,800km away to the opposite end of the country.

It wasn’t necessarily the distance that intimidated the promising young forward, BUT his girlfriend, whom he never wanted to leave behind.

A confused Everton was deeply in love and liked her very much, a feeling which made him never care much about his career.

He thought that if he went there, he would risk losing her. A conversation with his coach helped settle the issue. In the words of his coach;…

“I told him the girl could wait for him, but that Grêmio would not. Another boy who was the second-best after him would go replace him at the prestigious club. Then he would regret it and the other boy would be rich and he would remain poor.” Everton’s coach advised.

Another person in the club also advised: ‘If this girl doesn’t want to wait for you, you’ll find an Italian or a German girl.’

After agreeing to leave his girlfriend behind in Fortaleza, Everton’s second challenge was to acclimatize to the cooler weather felt around his new club.

Temperatures can drop down near the freezing point in Porto Alegre, which is close to the borders of Argentina and Uruguay.

The winter in the state of Rio Grande do Sul was very severe that Everton thought of giving up, but the club supported him.

Early on with the club, Everton got his nickname “Cebolinha” which literally means “Little Onion”.

This nickname was inspired by an enormously popular Brazilian cartoon character and also because he looked just exactly like the vegetable plant.

Six years after his stay at the club, the Brazilian football’s phenomenon helped his team in winning the Copa Libertadores with Grêmio in 2017, making top European clubs beg on their knees for his signature.

Helping his country win the trophy saw him becoming one of the hottest football properties on the continent.

The memories of precious Brazilians in the 2019 Copa American tournament will always be remembered. The rest, as they say of Everton Soares Bio, is history.

With Everton Soares’ rise to fame, the questions on every fan’s lips have been; Who is Everton’s Girlfriend? Is he still dating his love whom he left behind for his career?…

Little do we know about the answers to these questions. However, behind the successful footballer, there is a glamorous girlfriend- and now wife who goes by the name Isaranieri (literally meaning Lisa Ranieri) on her social media account.

Judging from Everton’s social media account, it is clear that both love birds tied the knot precisely on Saturday, the 29th of December 2018.

Before their marriage, both couples had been blessed with a lovely daughter whom Everton is very fond of. Owing to this fact, it might be that Lisa Ranieri is the “Same Girlfriend” who stayed behind while Everton went to play with Gremio.

Behind every great daughter is a truly amazing dad in the person of Everton. Judging from the photo below, it is his daughter, without a doubt is the sole person who stole his heart.

Getting to know Everton Soares Personal life away from the pitch would help you get a complete picture of his personality.

Starting off, Everton is independent and ambitious in the pursuit of an all-around success. He often knows what he wants, and this is the reason why he got separated from his family at a young age.

Despite his playful nickname “the little onion“, Everton has always been the withdrawn type of person. He is a quiet person who never complains. Someone who can be in the midst of people without uttering a word.

Money in millions of pounds is truly valued for Everton Soares thanks to his hard work and the decision to become a professional footballer.

Off the pitch, Everton maintains a cool figure as observed in his pose with his exotic car and on the beach. Without a doubt, this is the making of a millionaire lifestyle.

As at the time of writing, Everton, who despite living a lavish lifestyle, does not showcase his wealth on social media. He is smart about managing his fame and not spending like crazy.

Spending his time and money on the beach and in the sea has a great impact on his emotional wellbeing.

As at the time of writing, Everton’s family presently live a private and low-key life. His household lives in Brazil. While there, the paparazzi are always on the prowl.

Both his mum, dad, brothers, sisters and entire relatives are presently reaping the benefits of instilling a tough mentality into their very own.

Everton’s devotion to making sure his parents, brothers, sisters, and relatives are comfortable is similar to his commitment on the pitch.

This section of the Brazilian’s Bio tells you more info about him. So, without further ado, let’s begin.

Everton is someone who is very open about his Christian faith. He praises God for every opportunity he gets in his career.

His social media account below reads 1.1 million followers. On it, Everton has his savior “Jesus” written in place of his moniker. Off-pitch, he is outspoken about the role Jesus plays in his life.

The explanation for Everton’s tattoo can be tied to his tough upbringing and of course his Christian religious faith.

The meaning of every single one of his tattoo is yet to be ascertained. By looking at this photo, you could identify what looks like a Ghost Rider head tattoo. It is situated on his right arm and Jesus on his chest.

LifeBogger appreciates you for taking the time to read our version of Everton Soares’ Biography. Our team always watch out for accuracy and fairness in the quest to deliver you South American Football Biographies. Everton Soares’ Bio is a product of LifeBogger’s Brazilian football collection.

Please reach out to us (via comment) if you notice anything that doesn’t look right as you read and digest Everton Soares’ History. Kindly stay tuned for more Football Stories as they cut across our categories. The Childhood Stories of Scott McTominay,  Anthony Contreras, and Paul Gascoigne would interest you. Finally, kindly give us your honest feedback about Everton Soares and his amazing story.