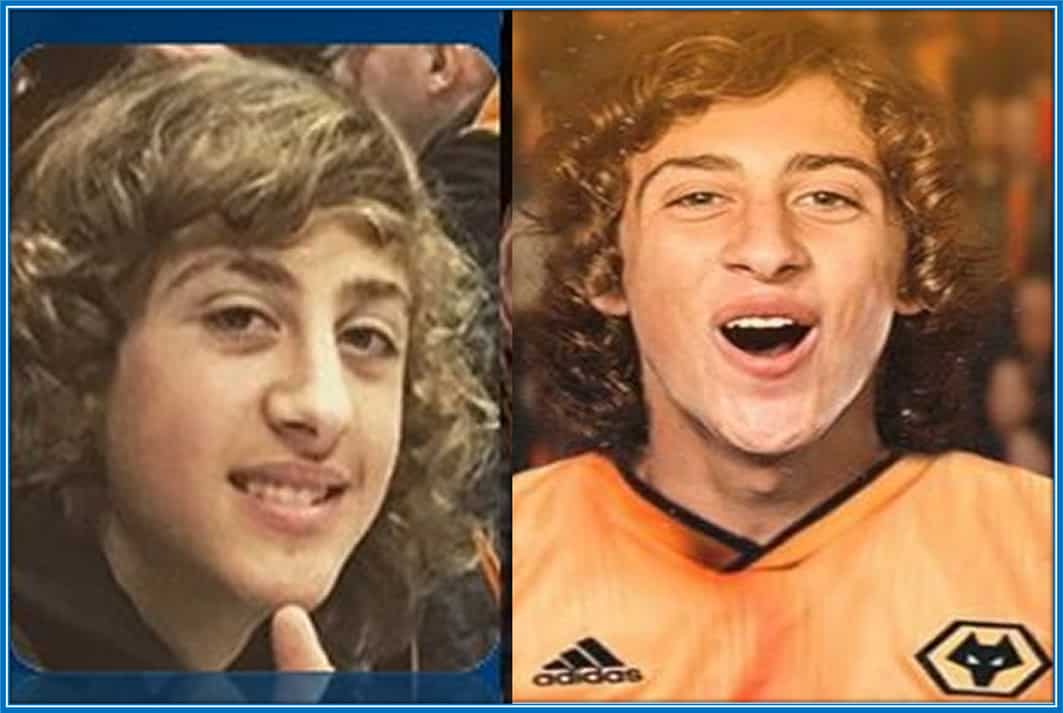 Our Fabio Silva Biography tells you Facts about his Childhood Story, Early Life, Parents, Family, Girlfriend/Wife to be, Lifestyle, Net Worth and Personal Life.

In the nutshell, this is a Life Story of the Fábio Silva. We begin from the Portuguese’s boyhood days to when he became famous.

To whet your autobiography appetite, here is his childhood to adult gallery — a perfect summary of Fabio Silva’s Bio.

Yes, everyone knows Fabio is a pacey and instinctive finisher who has made fans cancel the idea that replacing Ronaldo is impossible.

Despite the accolade, not many have taking time into reading Fabio Silva Biography. It is on this note that we have this engaging piece to help you get a complete picture of his Life Story.

For Biography Starters, the Portuguese bears the names ‘Fábio Daniel Soares Silva’. Fábio Silva was born on the 19th day of July 2002 to his parents- Mr and Mrs Jorge Silva, in the east of Portugal’s Porto Metropolitan Area.

The handsome Footballer was born into a family of six- that is, four children (a brother and two sisters), including his mother and father.

The “next Cr7” grew up at his birthplace in Gandomar alongside an older brother Jorge Jr and no fewer than two sisters, Ines and Laura. He has Sporty memories of his childhood
which revolved around playing football all day.

Did you know that the soccer player was born a year after his dad helped Boavista win the Primeira Liga in 2001?

Yes, you read that right, Fabio’s dad was a pro footballer. As such, their middle-class household lived comfortably and had interests in the sport.

The striker’s nationality as a Portuguese is a true fact. In addition, research carried out to determine Fabio Silva family origin confirms he has his roots traced down to Gandomar municipality, eastern Portugal.

The people of this region speak Portuguese, like every other area of Portugal. 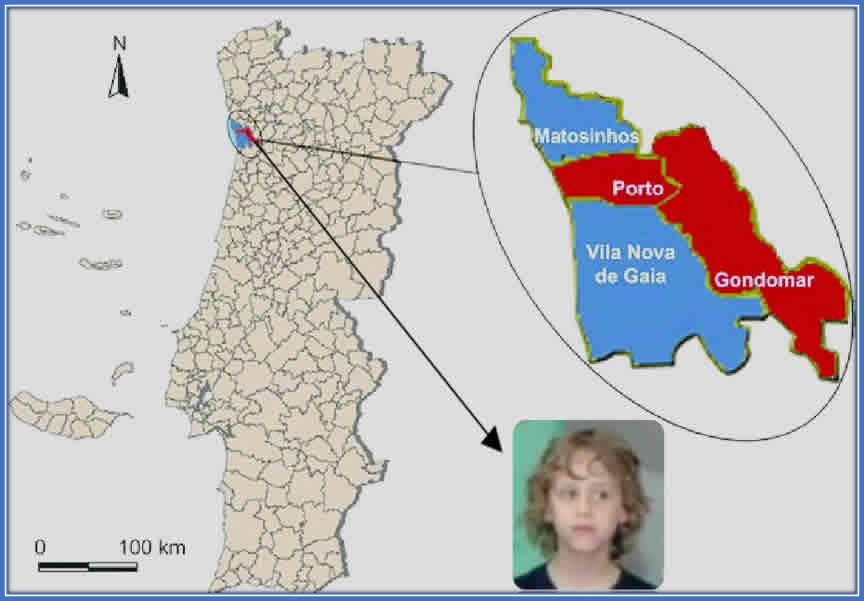 It wasn’t surprising that Fabio began training with local club Uniao at a very young age. He went on to join hometown club Gondomar.

Pedro Fonseca, his coach at the time, recalls that Fabio was a rare breed of young soccer players. According to him, the then football prodigy hated losing and often imposed punishment on himself whenever things go awry. 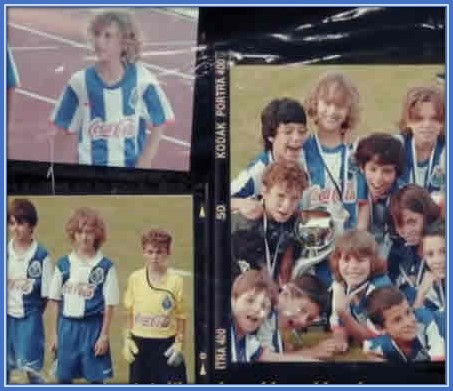 By the time the kid was eight years, he was already a hot prospect with news of his precocious talent spreading like wildfire. Fabio’s success alerted Porto who didn’t waste time in snapping him.

He spent 5 years with the Dragoes before his quest for stiffer competition saw him move to Benfica.

At the peak of his 2-year stint with Benfica, the then 15-year-old was already drawing interests from Manchester City and Liverpool.

Sensing that Fabio was keen on switching to either of the Premier League sides, his boyhood club Porto launched a desperate campaign to have their product back.

In fact, the club’s former academy manager, Jose Tavares made a long trip to meet Fabio Silva family as they holidayed in Algarve, seeking the teenager’s return.

Assured of a brighter future, Fabio returned to Porto and picked up from where he left off. By the summer of 2018, he was already drawing comparisons to 5 times Ballon Dor winner Cristiano Ronaldo.

He solidified his worth by scoring 33 times in 39 appearances for Porto U19s and made his pro debut for Porto in a 2–1 loss at Gil Vicente in the Primeira Liga.

With his debut and subsequent appearance, Fabio set many records relating to his young age. Ever since Fabio has joining Nuno Espírito Santo’s Wolverhampton, his fans can’t hold back their excitement.

They know of his track record and look forward to a brighter future with him alongside his Portuguese brothers namely; Pedro Neto. and Diogo Jota etc. Whichever way things pan out for the Portuguese, the rest, as they say, will be history.

Who is Fabio Silva’s Girlfriend?

At 18 years of age, the striker’s Journey in professional football is beginning a gaining momentum. He has his life ahead of him with more than a decade to shape his career.

Thus, information about Fabio Silva’s Girlfriend is hard to come by because he is not quick to become emotionally entangled with any woman.

It will take a while before headlines titled Fabio Silva’s girlfriend become viral content.

A good household is important to the life and rise of soccer talents, and the striker is not an exception. We bring you facts about Fabio Silva parents and siblings.

In addition, facts pertaining to his relatives will be laid bare in this section.

Although the former defensive midfielder did hand his boots in 2011. Fans remember him for helping Boavista win the Primeira Liga in 2001.

Jorge has close bonds with his family, particularly his sons who took after him in playing soccer. 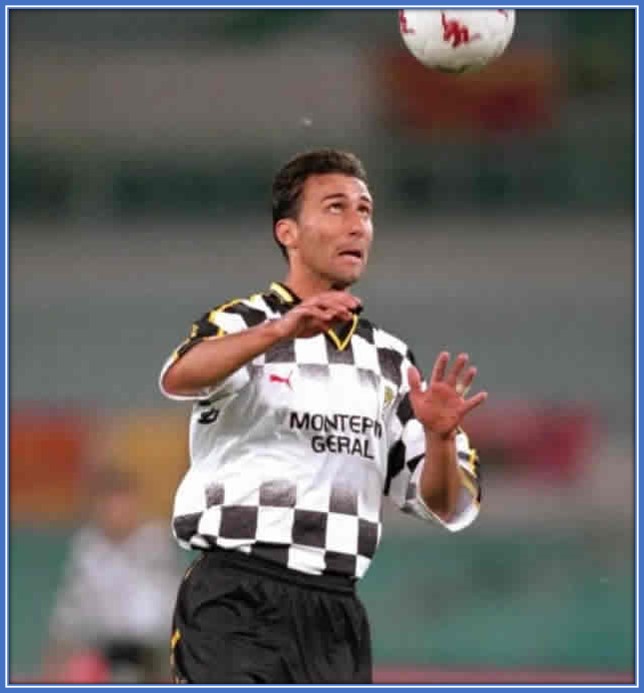 Great mums have produced great sons and she isn’t an exception. Although the mother of Fabio Silva appears to be the least known in the family.

Despite that, her contribution to raising the Soccer Talent and his siblings is praiseworthy. The striker is yet is to speak about her but has her best interests at heart.

The striker has three sisters and a brother. We have identified two of the sisters as Ines and Laura. On his part, Fabio’s brother Jorge Sr is also a footballer who plies his trade with Lazio.

Fabio Silva parents ensured that the older sibling and the striker had their development in soccer at the same clubs until they went separate ways at Benfica.

Jorge’s career has so far been less illustrious. Nonetheless, he is proud of his younger brother’s exploits in the sport. 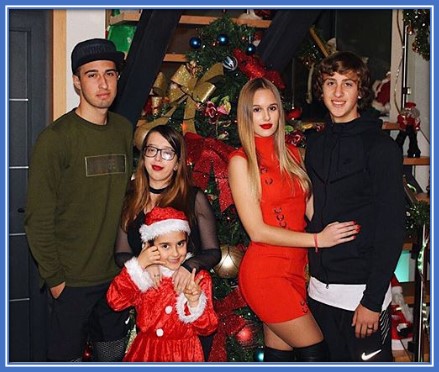 Moving on from Fabio Silva’s immediate family, the first thing to clarify is the fact that he is not related to Andre Silva.

There are no records of the striker’s family roots or ancestry, particularly those of his grandparents. Similarly, his uncles, aunts, siblings and nephew are yet to exist in cyberspace.

Who is the striker outside soccer and What is the nature of his character beyond the sport? To begin with, Fabio enjoys happy moments outside training and playing competitive matches.

Fans and teammates see him as a humble and good nature fellow who knows the right cords to strike when relating to people.

He has interests in Fashion, loves vacationing, watching video games and hanging out with friends. 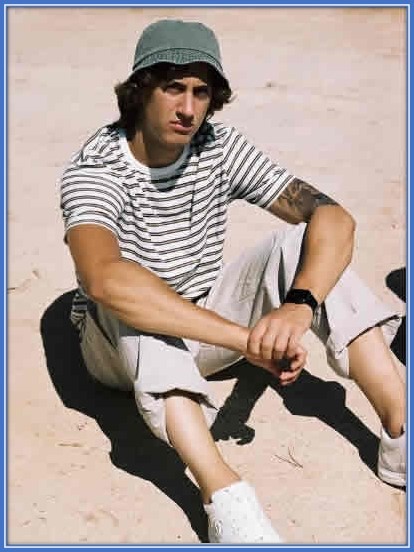 Let’s talk about the soccer player’s net worth and how he made his money. To start with, Fabio Silva’s net worth is still under review. However, he has a market value of €12.00m.
Details of his wages and salary structure at Wolverhampton are still sketchy.

However, he enjoys sponsorship from Nike and has an array of Endorsements lined up for him.

The striker might not have obtained his first driving license yet, but there is no denying the fact he can afford exotic cars. Neither are there encumbrances on his way to living in expensive houses/apartments.

To wrap up this interesting piece, here are little-known or Untold facts about the striker.

Fabio is not big on revealing details of his personal life – including religion – during interviews. However, the odds are in favour of him being Christian like his sister’s name – Laura – suggests.

When it comes to FIFA 2020 ratings, the numbers put up for the striker – unlike that of his fellow Portuguese (Florentino Luis)- do not reflect his true potential.

Yes, fans understand that he has only taken baby steps in first-team football. Many believe that an overall score of 70 with a potential of 86 is a mismatch of his potentials. 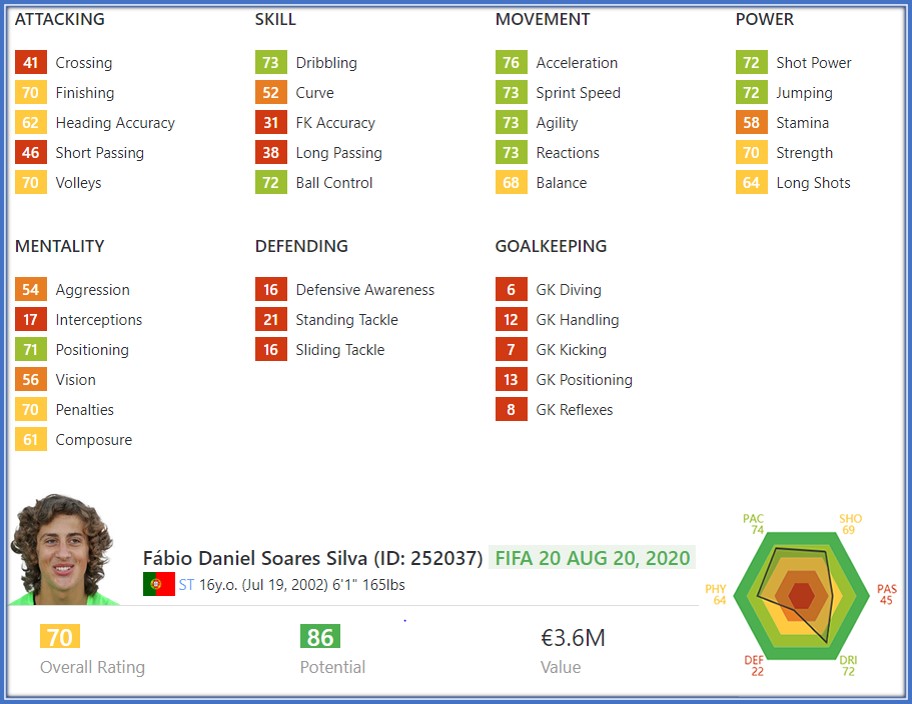 The striker is a legend in Football Manager. Without a doubt, he gets incredible attributes in years to come, such that gamers come to regard him as a Football Manager Wonderkid. Wolves will be happy to see him achieve those ratings in the foreseeable future.
Wiki:

That does it for Fabio Silva Bio and we hope you’ve learnt something from his Life Story. Without a doubt, this Childhood Story inspires us to seek stiffer competitions like Fabio, who played in age groups ahead of him amidst moves to several clubs.

At Lifebogger, consistency is our watchword in delivering Childhood Stories of your favourite footballers. See anything that doesn’t look right in the Biography of Fabio Silva, kindly let us know by dropping a comment in the box below.