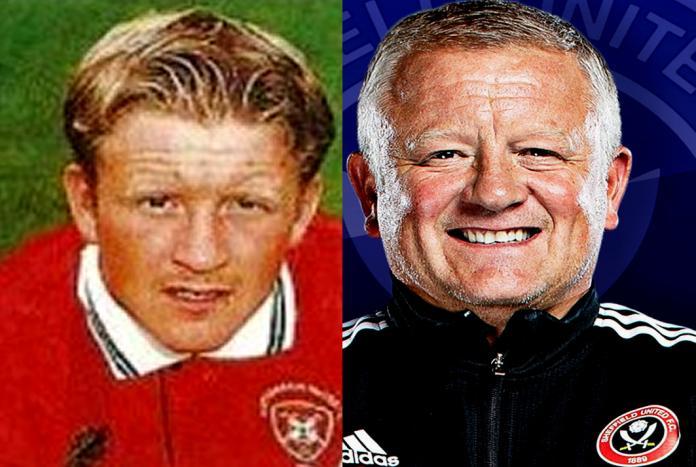 In a nutshell, we give you the history of Football Manager with the nickname “The Old School Boss”. LifeBogger begins from his early days, to when he became famous. To give you a taste of the engaging nature of Chris Wilder’s Bio, here is a pictorial summary of his life.

Yes, everyone knows he is a manager with a so-called ‘Dinosaur’ approach to football management. He is the one who performed miracles by making his Sheffield team (costing less than £1m) get a fine start to the 2019/2020 premier league season. However, only a hand few of football fans consider our version of Chris Wilder’s Biography which is quite interesting. Now without further ado, let’s begin.

Christopher John Wilder was born on the 23rd day of September 1967 in Stocksbridge, a small town and civil parish located in the City of Sheffield, England. Although born in Sheffield, the football manager of White British ethnicity has his family origin from the Steel city of Liverpool, meaning he is a ‘Scouser‘.

Wilder grew up alongside his parents, siblings and most importantly, his uncles who had a great influence on his upbringing. He comes from a middle-class family household operated by his dad who earned a living in the working-class area of Liverpool. As a little boy, Wilder’s uncles had a great influence on him liking the game. His set of uncles didn’t only teach him how to play football, but also took him to Anfield to watch Liverpool games. In his words;

“We used to go over at Christmas and the odd school holiday. That’s when I used to go to Anfield with my uncles who lived in an affluent suburb, east of Liverpool. I would watch them including my dad play football atimes”

In the mid-Seventies, Liverpool had a huge amount of success, winning everything- the European Cup, UEFA Champions League, League Cup, European Super Cup/UEFA Super Cup etc. Chris Wilder was at Anfield to graze some of those moments with his dad and uncles, a development that saw him wanting nothing else other than to become a footballer.

While in school, Wilder enjoyed all sports, especially cricket. Despite being an all-rounder, footballer still remained the focus. In order to pursue his dreams, Chris Wilder left Liverpool to his birthplace to Sheffield in search of footballing opportunities. He got employed as a ballboy for Stocksbridge Park Steels F.C located in the Stocksbridge district to Sheffield.

Later on, Wilder got a successful trial with Southampton as a football apprentice and academy player. As a humble apprentice, he took the role of cleaning the football boots of Southampton legend- David Armstrong. Despite giving his best, poor Wilder couldn’t progress through the club’s youth rank to senior football. Sadly, he was released due to poor performance without making it into Southampton’s first team.

Any youth player who has lived through academy rejection will know only too well the deep emotional pain and damaging psychological consequences it can have. After failing to make the grade as a Southampton academy player, poor Wilder returned to Sheffield, his city of birth. Thankfully, Sheffield United accepted him as a defender.

Despite being an average player, Sheffield helped Wilder to forge his senior career. The former ball boy in no time projected himself in the club’s first team in August 1986. During his career with Sheffield, Wilder humbled himself by going on loan with a total of 11 clubs before joining Halifax Town in 1999, the club where hung finally up his boots. Wilder  (pictured below) retired from football at the age of 34.

Chris Wilder upon retirement began venturing into football management with the belief that he would do better despite being an average football player. He started his coaching career with Alfreton Town in the year 2001. Football management as he anticipated began on a positive note. Did you know?… In just 27 weeks after being in charge of Alfreton, the English man won four trophies.

Taking the next phase in his managerial career, Wilder went on to manage Halifax for more than 300 games until the club went into liquidation on 30 June 2008. The liquidation led to his move to Oxford and later on, League Two rivals Northampton, where he led them to a League Two title with 99 points.

Did you know?… Chris Wilder while at Northampton was unpaid for three months, a development that led to the very sad experience of having his card declined severally at supermarket checkouts. Poor Him!!!

Chris Wilder’s life in the eye of financial storms was rescued by Saudi Arabian Prince Abdullah, the owner of Sheffield who invited him to take over management with the club. On 12 May 2016, Wilder joined his boyhood club Sheffield United.

With little financial backing, Wilder made a lot of his acquisitions via free transfers. He made his first mission to be; “Making the players feel at home”.  In a bid to achieve this, the no-nonsense manager ripped down the harsh writings of “Welcome to Work” on the club’s training ground. To him, there were better motivational slogans and players were meant to feel at home.

Despite a poor first season start, Wilder guided the club into becoming League One Champions securing 100 points in the process (a club record). His success continued after gaining entry into the Championship. At the Championship, Wilder led his Sheffield United side to the top winning his second promotion in just three years at the club.

In recognition of his achievements, he was awarded the LMA manager of the 2018/2019 season. Wilder defeated Pep Guardiola to the award even while Manchester City manager completed a domestic treble.

After bringing his hometown club to the premier league, Wilder began to build his team around John Lundstram, the one time Everton reject and a football genius from his city, Liverpool. Giving the rest of his players the freedom to operate saw everyone fitting perfectly into the Blades’ jigsaw. Wilder’s Sheffield United at the time of writing has proven the football community wrong after being patronized by some fans as too basic for the Premier League.

As at the time of writing, the English manager from Liverpool is being lauded as one of Premier League’s most original tactical innovators after Pep Guardiola– all thanks to Blades’ stunning start to the 2019/2020 season. The rest, as they say, is now history

Chris Wilder is a married man. He was initially married to his ex-wife named Rachel Wilder of whom both had two beautiful daughters who are; Martha Wilder and Evie Wilder. Bringing up the kids while her husband went on with his coaching business, Rachel Wilder managed a Gap clothing store in Manchester and Sheffield.

According to reports, it was revealed that Chris Wilder’s former wife (Rachel) does not like football, sometimes getting fed up with it is watched for several hours in the family home. Notwithstanding, she only watches when her husband’s team is winning. Among Chris Wilder’s daughters, it is only Martha who likes sports. Evie Wilder is into fashion.

After many years of their parent’s marriage, both Martha and Evie began to witness a dwindling relationship between their mum and dad. Things began to fall apart and it got so sour that a ‘divorce’ was seen as the best option for the old couple.

Chris Wilder moved on after the divorce. After some time, he met a lady called Francesca whom he described their meeting as ‘love’ at first sight’. Both Chris and Francesca got married in the transfer deadline day of 2017 (31st of January 2017). What a day for a football manager to get married!!

Getting to know him Outside Football would help you get a complete picture of his personality away from his activities on the football pitch.

Starting off, Wilder is an honest man who deploys a professional and happy-ending way to keep people under his care grounded. He believes so much in freedom and would not take it likely if his simplicity is taken for granted. For instance, if you did something that makes him happy, he’d be happy to tell you he is happy. If you do something that doesn’t make him happy, he’ll immediately let you know, sometimes coming down on you like a ton of bricks. Speaking about his personality as regards not tolerating laziness, he once said that ‘Waiters are only for restaurants and not for players who fail to realize their talents’.

His Love for Beer & Wine: Discussing his personal life from a social standpoint, Chris Wilder is described by many as someone who regularly socializes (especially) with old friends from the pub where he is most time spotted seeping his favourite beer.

Did you know?… A couple of beers and wine with his coaching staff and old players always goes down well after most big wins.

Owing to family ties, his entire extended family enjoys when football takes him to Merseyside to play against Liverpool or Everton. This is because the Sheffield United boss used those moments to reconnect with his family in Liverpool. Even while his team plays either Everton or Liverpool, Wilder finds himself buying match tickets for some of his opponents whom he describes as Family. Hence, playing against his family side is deeply personal because his dad is from Liverpool and most of his family members either Liverpool or Everton fans.

On the other side, Sheffield fans still claim Wilder to be their own just because he grew up in their city. Did you know?… Wilder is often serenaded with chants of ‘He’s one of our own’ at his beloved Bramall Lane. This is because Sheffield fans love him and believe he is also family.

Chris Wilder lives a humble lifestyle despite receiving a decent salary as a manager. Rather than using flashy cars which his wages could purchase, he would rather travel around Sheffield by public transport preferably busses.

According to reports, Wilder still sometimes uses the Ecclesall Road bus stop near his home, a sign which shows his down to earth nature. He is, without a doubt, an antidote to expensive living.

During his time at Alfreton Town and Oxford, Wilder would most times journey to Manchester to see the Legendary manager for mentoring lessons. Speaking about the experience, he once said in his words;

“He took out time to help me along the way. He used to do it to quite a few young British managers, not just me. Stuff like that gave me a huge boost.

He once phoned the night before my promotion play-off final with Oxford [against York in 2010] and passed on a couple of tips that helped me get the win.”

Religion: Chris Wilder just like many Liverpool families are believed to have come from a Christian family background. However, there are little or no signs of his attachment to religion.

FACT CHECK: Thanks for reading our Chris Wilder Childhood Story Plus Untold Biography Facts. At LifeBogger, we strive for accuracy and fairness. If you find something that doesn’t look right, please share it with us by commenting below. We’ll always value and respect your ideas.