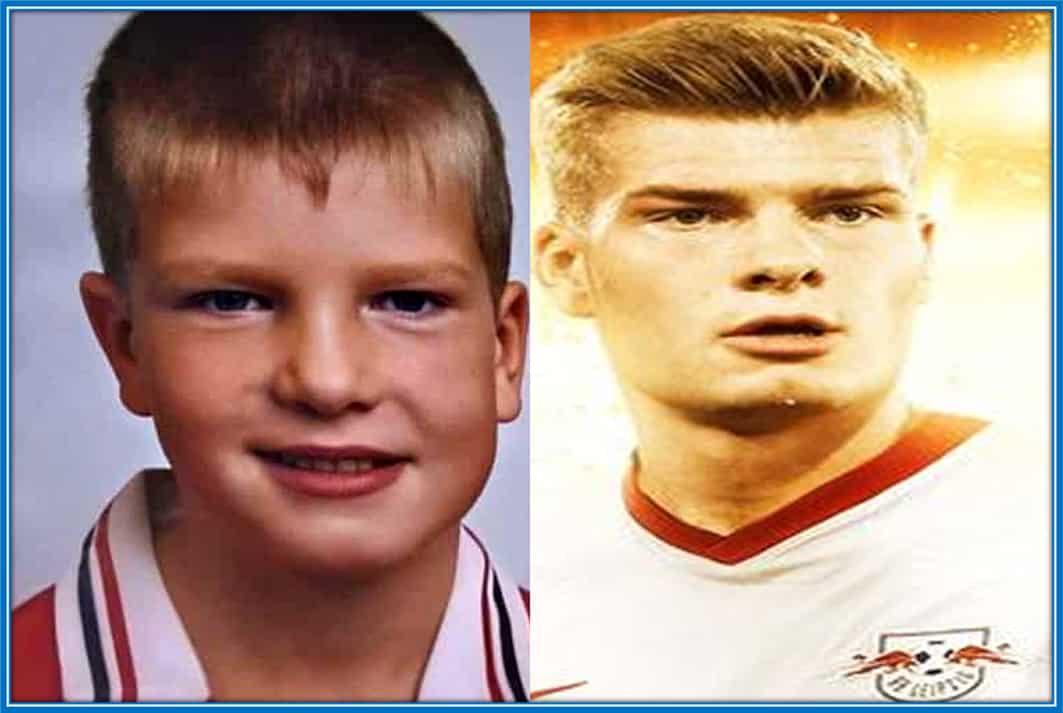 Our Alexander Sorloth Biography portrays Facts on his Childhood Story, Early Life, Parents, Family, Girlfriend/Wife to be (Lena Selnes), Net worth, and Lifestyle.

In a nutshell, we tell you the history of the Norwegian professional footballer often referred to as the King of the North.

Lifebogger begins from his early days until when he became famous. To whet your autobiography appetite, here is a cradle-to-rise gallery — a perfect summary of Alexander Sorloth’s Bio.

Just like Martin Odegaard, everyone knows of his pace strength, and intelligence. However, only a few soccer enthusiasts know of Alexander Sorloth’s life story which is inspiring. Without further ado, let’s begin.

For Biography Starters, the striker’s nickname is “the new Haaland”. Alexander Sorloth was born on the 5th day of December 1995 to his mother, Hildegunn Roten, and father, Goran Sorloth in the city of Trondheim, central Norway.

The forward grew up in his hometown at Strindheim in Trondheim alongside two sisters – Karoline and Amalie.

Growing up in the town, Sorloth was full of energy and adrenaline. Thus, he could actively take part in three sports. They include ice skating, handball, and soccer.

While the then youngster was at it, he had the support of his middle-class parents. They raised him and his sisters without lack and ensured he freely decide what sport he wanted to make a career out of.

Norwegian is an apt word that describes the striker’s Nationality. Results of research carried out to determine his ethnicity presents the likelihood that he is of Inntrondsk ethnicity as shown in the images below.

The Norwegian chose soccer because it turned out to be his greatest passion. Sorloth’s father – who is a former professional footballer – was happy with the choice.

He charged him to accord a hundred percent commitment to the sport and saw to his enrollment at youth academy at local football club Rosenborg.

The soccer prodigy rose through the ranks of Rosenborg and made his professional debut for the club when he was 17.

His debut was an event that Sorloth can’t easily forget because it was a Europa League qualifying match and he scored just 12 minutes after coming off the bench.

When the budding forward was loaned to Bodo Glimt he began entertaining thoughts of quitting soccer. He told Norwegian newspaper VG that:

“I had chances to show Rosenborg how good I was but i failed to do so. When I moved to Bodo, i lived in a sad, dark apartment. I wasn’t even considering playing.”

Fortunately, Sorloth had a motivating conversation with his father that made him decide not to give up. The decision saw him had an extraordinary season with Bodo.

His good run of form in subsequent transfers to Groningen and Midtjylland caught the interest of Crystal Palace which signed him in 2018. Sadly, Sorloth didn’t get enough playtime. In fact, he only had just 4 Premier League starts in 20 appearances.

Seeking regular first-team opportunities, Sorloth switched to Genk where he spent the second half of the 2018/19 season on loan.

The forward’s breakthrough came in the next campaign when he joined Turkish top-flight side Trabzonspor on loan.

He found the back of the net 24 times and lent nine assists in 34 Super Lig games to become the division’s top scorer.

Upon playing for the national team of Norway (alongside Erling Braut Haaland) in two group matches of UEFA Nations League, Sorloth did not return to Trabzonspor.

Instead, he lent his signature to Julian Nagelsmann’s RB Leipzig in September 2020 and looks to achieve more in the Bundesliga. The rest, as they say, is history.

Behind the successful footballer, there is indeed a glamorous WAG. Are you familiar with the name Lena Selnes? It is the name of Alexander Sorloth’s girlfriend.

They have been in a romantic relationship for over 4 years. In fact, Alexander Sorloth’s girlfriend was with him as far back as early 2016 when he joined FC Groningen.

The lovebirds who have no son(s) or daughter(s) outside wedlock often go on vacations together. There’s no doubt that they love each other’s company and it might not be long before they walk down the aisle.

Whenever the forward reflects on his life story and journey in soccer, he appreciates the roles of some persons.

They are his family. We bring you facts about Alexander Sorloth’s parents. In addition, we will provide facts about his siblings and relatives here.

Goran is the father to the impressive forward. Like we earlier mentioned, he is a former professional footballer and an impressive one of that. Sorloth grew up in a house that had medals and honors which his dad amassed during his 14 years career as a striker.

Goran has a close relationship with Sorloth who is his only son. He often calls him after each match to advise him on areas of his gameplay that need improvement.

Hildegunn Roten is the mom of the forward. She is a handball enthusiast who helped raised the soccer genius with his siblings.

She recently joined her husband in following Sorloth’s negotiations with Leipzig closely and was happy to receive news of a sealed deal.

About Alexander Sorloth Siblings and Relatives:

The forward has two little-known sisters – Karoline and Amalie – but no bother.

There is a shroud of obscurity on his ancestry, particularly as it relates to his paternal and maternal grandparents. Neither have we been able to identify his uncles, aunts, cousins, nephews, and nieces.

Outside soccer, the forward is known to be an adventurous, affable, and fun-loving individual.

He does not speak highly of himself and tries to downplay his strengths for the sake of modesty. On one part of his personality, Sorloth is not a fan of people who talk too much – Read more at Hurriyet.

Traveling, cooking, swimming, and watching movies are among his list of hobbies. He does also have interests in skating and playing handball, just as it has always been since his childhood days.

Let’s talk about how the forward makes his money and the nature of his spending patterns. To begin with, Alexander Sorloth’s net worth in 2020 is still under review. Neither is his salary structure with RB Leipzig available for public scrutiny.

Notwithstanding, we know that whatever he agreed with the German club will be an improvement of the £936,000 Per annum that he used to earn at Crystal Palace.

When we took endorsements, playing bonuses and sponsorship into account, we realized that Sorloth has a huge wealth base. His modesty keeps him from flaunting his luxurious lifestyle that includes living in an expensive house and driving posh cars.

To wrap up this engaging bio about the striker, here are little-known or untold facts about him.

Since you started viewing Alexander Sorloth‘s Bio, this is what he has earned with RB Leipzig.

Growing up as a kid, Sorloth was a fan of Chelsea F.C. also known as The Blues. It was during the era which the English side had stars like Gianfranco Zola, Tore André Flo and later Didier Drogba who won many hearts.

The Norwegian has a low overall FIFA rating of 77 points with a potential of 81. There’s no debating the possibility that his ratings will improve in meteoric proportions.

Especially as he has signed up to play in one of Europe’s most competitive leagues. The truth remains, he is poorly treated in FIFA like fellow Norwegian, Joshua King.

The striker is yet to give clues about his religion as of 2020. Notwithstanding, the odds are in favor of him being a believer and possibly a Christian. More so, his sister Caroline bears a Christian name.

The football genius’s nickname is “the new Haaland” because he plays like his compatriot Erling Braut Haaland. The duo are also of the same height and have the same hair color.

Thanks for reading our Alexander Sorloth biography. We hope it has inspired you to believe that giving up never pays. He would not have become who he is today if he quit playing football after being loaned to Bodo Glimt.

We also have to credit Alexander Sorloth’s parents for their unwavering support to his career. Their influence which we captured in Sorloth’s Biography facts is worthy of emulation.

At Lifebogger, we pride ourselves in delivering biography facts with accuracy and fairness. Have you seen anything that doesn’t look right in this article? Do well to contact us or leave a comment.