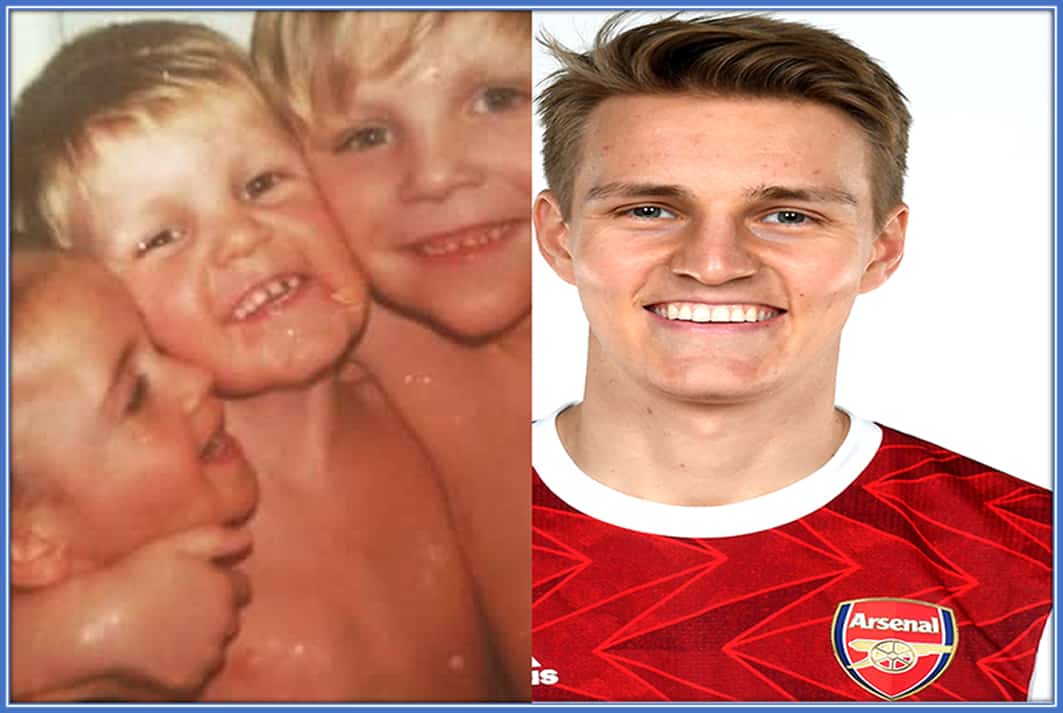 It is a good read detailing the rise, fall and return of Martin Odegaard. To give you a taste of the engaging nature of the biography, here is a pictorial summary of his life and career progression.

However, only a few persons have read a detailed version of Martin Odegaard’s biography, which is quite engaging. Without further ado, let’s begin.

For bio starters, his nickname is El-Rey. Martin Ødegaard was born on the 17th day of December 1998 in the city of Drammen in Norway. He was born to his mother, Lene Cecile and to his father, Hans Erik.

The son of Lene Cecile and Hans Erik is a bonafide native of Drammen as well as a Norwegian national.

In fact, he has his family roots deeply established in the North European country, where he is the hottest young talent since Ole Gunnar Solskjaer.

Are you aware that El-Rey grew up in Toppenhaug, a small, quiet part of Drammen? Interestingly, prior to Odegaard’s rise, people never associated the city with soccer.

As a matter of fact, it was only famous for fjords, mountains, picturesque valleys sprinkled with colourful wooden houses, thick snow, and Northern lights.

Thus, the natives of Drammen have Odegaard to thank for putting their city on the map of soccer hotspots.

It was at the city that Odegaard began playing the sport while growing up alongside his older brother, Kristoffer, and two younger sisters, Emilie and Mari.

By and large, El-Rey had a happy Sporty childhood and lacked nothing as a child. Though middle-class citizens, Odegaard’s parents and grandparents were into the clothing business.

In addition, his dad was into soccer management after years of being a professional. Therefore, it goes without saying that the insane money in the sport helped Odegaard’s family live comfortably.

By the time El-Rey was 6 years old, he was already a member of the local club Drammen Strong.

Interestingly, his parents and others gave the club an enormous sum of money to refill their gravel field with artificial turf.

The investment was crucial to Odegaard’s development as it helped him practice countless hours on the field.

Consequently, young Odegaard had already sharpened his skills when he joined the youth division of Strømsgodset, his father’s old team.

In fact, he effortlessly impressed the coaches and staff with his natural skill and work ethic.

When the then fast-rising footballer eventually made his senior debut for Strømsgodset, little did his admirers know the sacrifices he was making.

To start with, he was still undergoing compulsory education. Therefore, he never had the chance to train in the daytime with his club.

Instead, he trained at Night after school. Notwithstanding, he was racking up regular appearances in the Norwegian top flight before his 16th birthday.

Also, he went on to make a name for himself as a goal scorer and top assist maker for both club and country.

Impressed by his son’s early success, Hans Erik figured it was long overdue that his son played in the big leagues.

Thus, he took Odegaard to train with Europe’s top clubs including Liverpool, Bayern Munich, and Arsenal before settling on the biggest of them all — Real Madrid.

As the adage goes, if they are they’re good enough, they’re old enough. The teenage wonderkid Martin Odegaard was not too young to impress the Spanish giants.

In fact, he began training with Real Madrid superstars of the first team while he was still with Los Blanco’s reserves.

When the starlet eventually made his debut for the Los Blancos with ‘Ødegaard’ on the back outsold those with ‘Ronaldo’ in 2015.

However, the fanfare around him began to plummet due to the lack of first-team opportunities under Rafael Benitez who took charge of the senior set-up following the dismissal of Carlo Ancelotti.

Neither did first-team opportunities come up for the teenager when Zinedine Zidane was promoted to first-team manager.

As a result, he was loaned to Dutch outfit SC Heerenveen, where he humbly had regular playtime away from the spotlight.

Seemingly enmeshed in what can be best described as a loan farm, Odegaard was transferred to the Dutch side Vitesse.

He impressively became one of Eredivisie’s players of the season by scoring nine goals and registering 12 assists.

Interestingly, Los Blancos got more than they bargained for when the starlet was loaned to Real Sociedad in 2019.

He scored against his parent to knock them out of Copa del Rey in a 4-3 defeat. Stunned by the goal, fans of the Los Blancos could not help giving the youngster a standing ovation.

At the time of writing this piece on Martin Odegaard’s biography, the midfield maestro alongside Joshua King and Alexander Sørloth are recognized stars in Norwegian football.

More interestingly, Martin has joined Arsenal on a loan deal. Mikel Arteta knows of his track record and has faith that he will inject the much-needed creativity which the club’s midfield lacks.

Whichever way thing pans out Odegaard in North London, the rest, as they say, will be history.

Who is Martin Odegaard’s Girlfriend and Wife to be:

Most exciting young talents in football rarely have a romantic past. It is not the case of Martin Odegaard who used to have a girlfriend.

Her name is Oda Burud. She is Norwegian and a soccer player. They used to be a romantic pair before the player’s move to Madrid.

Seems the midfielder got his priorities after joining Madrid, as not much has been heard about him and Burud.

The way we figure it, chances are that he is single. He could also be dating secretly. Whichever is the case, soccer abhors secrets and it would not be long before netizens know about it.

Football geniuses are not born but made. It takes a family to make a genius like El-Rey. We bring you facts about Martin Odegaard’s parents. We will also make details of his siblings and relatives available here.

Hans Erik is the superstar’s dad. As was previously stated, he used to be a professional football.

In fact, Erik played as a central midfielder for Norwegian clubs, Strømsgodset and Sandefjord before hanging his boots in 2006.

The supportive dad is now into soccer management. He serves as his Odegaard agent and un-official manager.

In addition, Erik ensures Odegaard goes through consistent practice regimes as he looks forward to a decade career ahead.

Lene Cecile is the starlet’s mom. She has a calm demeanour which we believe Odegaard inherited.

Little wonder he ignored Sergio Ramos after the latter angrily called his mom foul names during the clash between Madrid and Sociedad.

Ramos’ abusive outburst came after Odegaard caught him on the shin with a late challenge, earning himself a yellow card.

If only the Skipper knew how lovely and supportive Odegaard’s mom is, he wouldn’t have said ‘I s*** on your w**** mother.

The midfielder has an older brother and two sisters. To start with his brother, his name is Kristoffer. He is a guard with interest in body fitness.

Meanwhile, there are little to no records about Odegaard’s sisters Emilie and Mari who chose to live private lives.

We bet they are supportive of the starlet like his parents are. However, the sisters chose not to ride the tide of his fame.

Away from El-Rey’s immediate family life, we are curious to know about his grandparents. We bet he has uncles and aunts.

Who are they? Also, we would love to meet his cousins, nephew, and nieces.

Have you met anyone who is funny and easy to get along with? If yes, then you can easily relate to Odegaard’s off-pitch personality. Are you a gamer? then you have a friend in Odegaard.

Do you love chess? Give him a call! In addition, he also loves reading, making smoothies, and creates time to spare for hanging out with friends and family. Isn’t he a complete playmaker?

In 2015, there was a teenage starlet whose weekly earnings were nothing short of $45,000 according to the New York Times. Can you guess the playmaker?

For the sake of our collective sanity, it would be wise that we don’t fantasize about having such an enormous amount as weekly pay. We advise you don’t imagine how many cars the 22-year-old has in his garage.

In addition, it will do our contentment a lot of good if we pretend that Odegaard’s house or apartment is not a million times better than the shelters we live in.

To wrap up this exciting bio on the exciting player, here are facts you may not know about him.

Since you started viewing Martin Odegaard’s Bio, this is what he has earned.

At Lifebogger, we strongly discourage comparing starlets with superstars, but we can’t help it right now. Odegaard has an overall rating of 83 points with a potential of 89 which makes him close to the world’s best.

Like Erling Braut Haaland also has (92 potential ratings as of 2021), Odegaard’s impressive future stats justifies every hype you have read and heard about him.

He is a colossus, a Norwegian treasure. We hope he attains this potential before his career peak.

When it comes to matters of faith, Odegaard identifies as a Christian. In fact, He grew up in a Christian home and once told newsmen that religious faith is an important aspect of his life.

To get a summary of Martin Odegaard’s Bio, use the table here.

Thanks for reading this informative piece on Martin Odegaard’s childhood biography.

We hope that the midfielder’s exciting life story detailing his journey from the local slums of Norway to the Premier League has inspired you to believe that talents are not born but made.

Just like Martin Odegaard’s parents committed efforts and resources to his practice and overall development. It behoves us at this juncture to commend the midfielder’s parents for their support to his soccer career in words and deeds.

At Lifebogger, we take pride in delivering childhood stories and biography facts with accuracy and fairness. If you see anything that doesn’t look right, do well to contact us or leave a message below.

Hello Clara. Thanks for correcting us on Martin Odegaard’s Date of Birth. We have effected that.