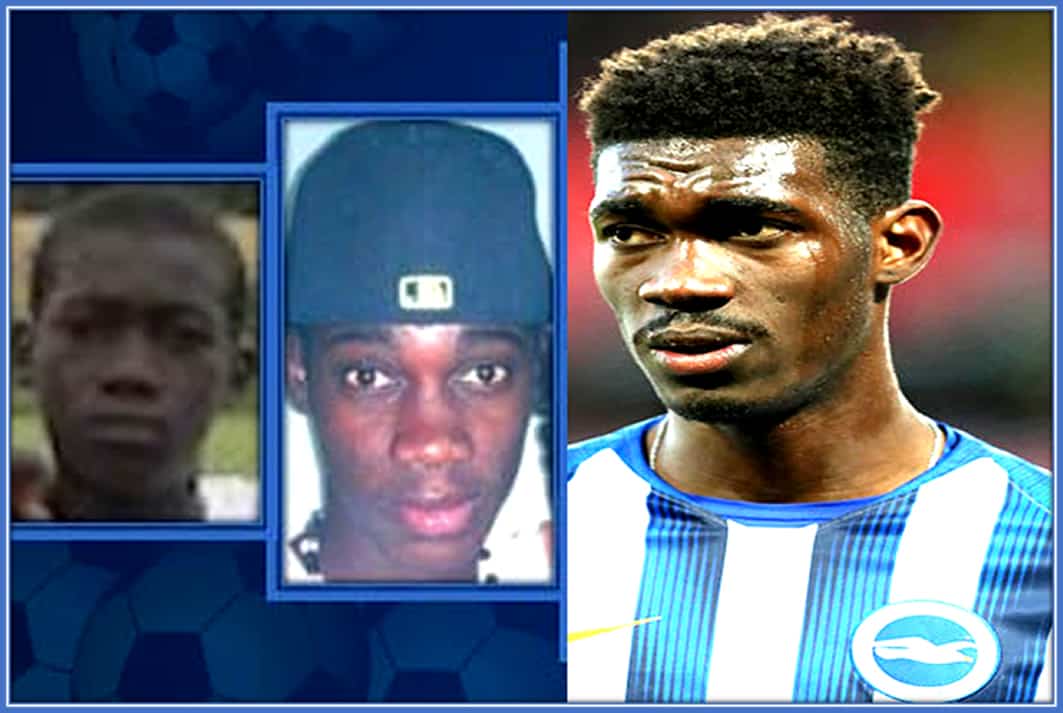 Our Biography of Yves Bissouma tells you Facts about his Childhood Story, Early Life, Parents, Family, Girlfriend/wife to be, Cars, Lifestyle and Personal Life.

It is a concise presentation of Yves Bissouma’s life story from his early days, to when he became famous. To give you a taste of the engaging nature of the Bio, here is a pictorial summary of his life and career progression.

Yes, everyone knows he is Brighton’s combative midfielder who puts up bone-crunching challenges. However, few have read his biography, which is quite engaging. Without further ado, let us begin.

For Autobiography enthusiast, his nickname is Zokora. Yves Bissouma was born on the 30th day of August 1996 at the town of Issia in Ivory Coast. He was born to his parents, Mr and Mrs Bissouma.

Interestingly, when you listen to the passion with which Zokora speaks about Mali, you will think he is a Malian. However, the Issia native is from Ivory Coast and has his family roots established in Côte d’Ivoire.

In fact, the soccer star spent most of his childhood (12 years) growing up in the district of Yopougon Sicogi, in Abidjan, Ivory Coast. Bissouma’s childhood was a mix of sporty upbringing with the guiding principles that talent is not enough.

“I was not talented as a kid. However, I was quick to realise that people are not born with qualities but can work hard to become successful. Therefore, I chose to be more courageous than talented.”

Indeed, it took a lot of courage for the then kid to dream and work hard. His parents were poor and his chances of succeeding were slim. Fortunately, he had grit and knew how to grind. According to him:

“I come from a very poor family. I think about it constantly. It is what gives me the strength to achieve my goals.”

The then soccer enthusiast was a part of many clubs in the district of Yopougon Sicogi, in Abidjan where he grew up at. Fortunately, his early football engagements led him to Abidjan junior club Majestic SC where fortune smiled on him.

How? Bissouma’s team went for a tournament in Bamako, Mali and he did well to impress. At the end of the tournament, the youngster and 4 others got an invitation to join JMG Academy Bamako.

Consequently, the then 13-year-old bode goodbye to his parents to pursue his football career in another land. According to him:

“It was hard to leave my parents because I’ve always been devoted to them. However, I advised myself that ‘Mama and Papa have done their best for me. Therefore,  I have to show them that their efforts won’t go down the drain.”

Indeed, Bissouma fared excellently well to make his parents proud of him. In fact, his rise to the club’s first-team was super meteoric. Similarly, he had a fast-growing reputation as midfield maestro which made Lille open to accepting him.

When the young player arrived in Europe in 2016, he had a hard time acclimatizing with the weather condition. According to him:

“I will describe it as terrible. In fact, my hands and feet usually got so cold to the point which I wanted to stop training,” he recalls.

Sadly, just when he was finding his footing, Lille’s former coach Marcelo Bielsa was bent on converting him to a right-back. Fortunately, he remained a midfielder, helped Lille avoid relegation, and began drawing comparisons to Paul Pogba.

Fast forward to the time of drafting this piece on Yves Bissouma’s childhood story and biography, he is an established star with Brighton & Hove Albion. Interestingly, Bissouma loves Arsenal and has told his friends that he is keen on making Gunners switch.

Thank Goodness, he’s entertaining to watch in the Premier League and North London will be glad to accommodate him. In fact, his 30 yards goal for Brighton against Blackpool is enough to convince Arsenal that they have found a perfect genius.

Continuous success is assured wherever his career leads him to. The rest, as they say, is history.

Zokora is only 24 years old. How will you react if we told you he has a girlfriend turned wife? Also, would it surprise you to know that he has a kid? Welcome to Yves Bissouma’s relationship life. Like we earlier stated, he is a married man with a kid. No thanks to the midfielder’s preference for guarding his private life, we don’t know who his wife is.

We can only hope that Brighton manager Chris Hughton make the revelation. He is like a second father figure to the soccer star. In fact, when Bissouma arrived in England, Hughton struggled to help secure visas for his wife and kid so that he will be comfortable playing in the Premier League.

There is a secret to Zokora’s incredible work rate. It is an open secret called family. We bring you facts about Yves Bissouma’s parents and siblings. We will also make facts about his relatives available here.

We weren’t kidding when we said family is the secret behind the player’s success. Did you know that Bissouma’s parents watch each of his games? Also, they are always in touch. He is always aware of his parents’ unflinching support and does his best not to register disappointment on their faces.

About Yves Bissouma Siblings and Relatives:

The footballer is yet to mention having siblings. Neither has he revealed the relationship that he cherish beyond his immediate family life. Thus, we can only hope that he talks about his grandparents, uncles, aunts nephew’s and cousins in the near future.

Just like footballers faces are different, so is the content of their character off-pitch. This begs the question, who is the footballer off pitch? From what we can gather, Bissouma is an easy-going player.

He loves to keep things simple and doesn’t speak more than necessary. Although the player has been vocal about his childhood and parents’ contribution to his rise, we can’t deny the fact that he is not open to revealing more facts about his personal and private life.

Nonetheless, it is easy to figure out what he engages as hobbies and interests. A player of his calibre would not make pretences about quality vacation and travelling. Who doesn’t want to see the world and enjoy the luxuries of life? Definitely not Bissouma! Judging by the passion with which he speaks about his wife and parents, we can bet that he cherishes spending time with them.

When the soccer star was spotted refuelling a Mercedes SUV, many were quick to wonder if he really owned the ride. Amid the speculations, the sceptics failed to take the fact that the Bissouma is worth 3 Million Euro (2.6 Million Pound) into account. Neither did they know he earns £1,300,000 annually and £25,000 weekly.

Hopefully, it won’t surprise you to see him live in a big house or apartment in North London if his Arsenal transfer is successful. Above all, we’re glad you understand Bissouma is aware that life should be enjoyed, and he is living a luxurious lifestyle to that effect.

To wrap up this article on Zokora Childhood Story and Biography, here are little-known or Untold facts about him.

Since viewing Yves Bissouma’s Bio, this is what he has earned with Brighton.

The son of Mr and Mrs Bissouma believes in the existence of a supernatural being called God. Also, the odds are in favour of him being a Christian. Especially when you study the photo below.

You might never understand how Yves Bissouma is underrated until you see his FIFA ratings of 75/82. Hopefully, the attention of authorities have been drawn to this injustice and an upward review is imminent.

The midfielder’s nickname is Zokora because he loves and admires former Cote d’Ivoire international Didier Zokora. According to him:

“I fancy his style of play. He is good in defence and works really hard. Above all, we got the same education because he GREW UP in a Jean-Marc Guillou academy, albeit in a different country.”

Asides being compared to Paul Pogba, who would believe the player could draw comparisons to a wrestler? Yves Bissouma compared to WWE legend Shawn Michaels for KICKING Jamal Lewis in the face. Technically, it was an attempted flick gone wrong. Fortunately, Jamal survived it.

Thanks for reading this informative piece on Yves Bissouma’s childhood story and biography. We hope that the midfielder’s journey from the slums of Mali to the Premier League has inspired you to believe that nothing is impossible. Just like Bissouma braved all odds through hard work to attain the level he is at.

It behoves us at this juncture to commend the midfielder’s parents for their support to his football career in words and deeds. At lifebogger, we take pride in delivering childhood stories and biography facts with accuracy and fairness. If you see anything that doesn’t look right do well to contact us or leave a message below.