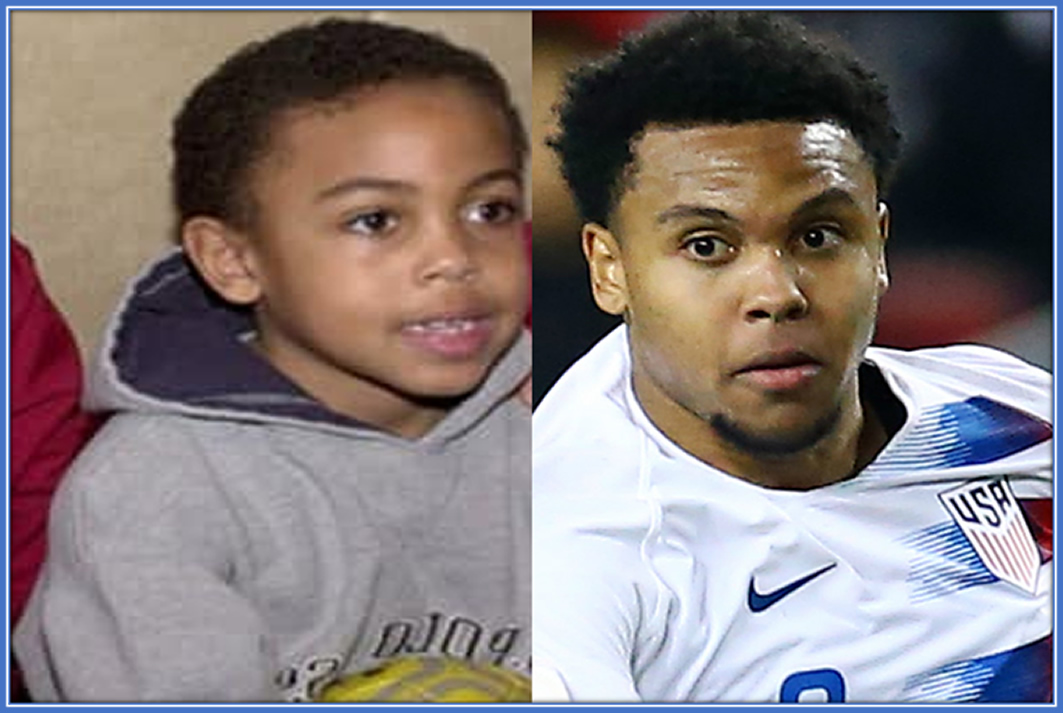 Our Weston McKennie Biography tells you Facts about his Childhood Story, Early Life, Parents, Family, Girlfriend/wife to be, Cars, Lifestyle, Net Worth and Personal Life.

It is a concise life story of the American soccer player. Lifebogger begins from his early days, to when he became famous.

To give you a taste of the engaging nature of Weston McKennie’s bio, here is a pictorial summary of his life and career progression.

Just like Yunus Musah, everyone knows of his versatility in the midfield and his defensive capabilities. However, only a few have read his biography, which is quite engaging. Without further ado, let’s begin.

For Biography starters, his nickname is Kenny. Weston McKennie was born on the 28th day of August 1998 in the city of Little Elm, in the state of Texas, USA.

The United States footballer was born to his mother, Tina, and to his father, John. His parents appear to be in their late 60s.

Like you must have observed, Kenny is Afro-American. In fact, you can verify the claims by studying photos of his parents up there.

Also, the Texan native accent is all shades of Yankee. What more would you need to confirm his family roots?

Young Kenny spent the first three years of his childhood in Texas growing up alongside an older brother, John, and a sister.

By the time McKennie was 6, his family moved to Kaiserslautern in Germany after his dad was stationed at the nearby Ramstein Air Base.

Yes, you read the midfielder’s dad was an American serviceman. Therefore, McKennie’s family had everything figured out.

In other words, the McKennie’s were at worse a middle-class family and he had a happy childhood.

It was in Germany that Kenny fell in love with soccer and became a member of the local club FC Phönix Otterbach when he was six.

Interestingly, he scored 8 goals in his first game for the team and earned a promotion to play alongside the club’s eight-year-old. The way the young football talent figured it, football was a sport to enjoy.

In fact, he never knew of the enormous impact that the sport could have on his future until the USMNT came to town, for a friendly against Poland in Kaiserslautern in 2006.

When Kenny’s family returned to Texas, he tried juggling soccer with American football to no avail.

Eventually, he became focused on soccer and joined the vaunted FC Dallas Academy in 2009. Amid his rise through the club ranks, he was also rising through the youth national team of the USA.

McKennie’s game was honed in the FC Dallas youth academy, where he spent seven years developing into one of the club’s best prospects.

To crown it all, his efforts during his last season with the club earned him Central Conference Player of the Year honours.

At 17, Kenny was at the crossroads of important career decisions. FC Dallas was keen on signing him and he had the offer of a full college scholarship from the University of Virginia.

In addition, Bundesliga side Schalke was keen on bringing him over to Europe. The teenager and his parents had a hard time figuring what was best for him before they agreed he should accept the offer from Schalke.

“I made the right decision and I don’t regret it at all. Although It wasn’t easy for me to let go of FC Dallas, you’ve got to think, will I look back in 10 years and wish I could’ve gone over to Europe?

Also, I feel like if you can make it there, you can come back to the MSL and play at a high level. On the flip side, if as a kid you go into MLS and then try to come over to Europe, you might not be ready.”

Fortunately, the bet proved to be rewarding, as Kenny had an impressive start to life with the youth team of Schalke. He made his first-team debut on May 20, 2017, and established himself as a valuable asset to the team.

Fast forward to the time of writing this piece on Weston McKennie’s childhood story and biography, the midfielder is on loan at Juventus.

With his arrival at the club, he entered the history books as the first American player at Juventus and Serie A’s fifth. The Old Lady is one of Europe’s top clubs with stars like Cristiano Ronaldo and Paulo Dybala.

There’s no doubt that McKennie would fancy his chances of making the contract permanent. As we already know, he is always permanent on Gregg Berhalter‘s USMNT side. Whichever way things pan out for him in Italy, the rest, as they say, will be history.

Who is Weston McKennie Dating?

Behind some excellent midfielders is a romantic past. As a matter of fact, we just made that up. Anyway, McKennie used to be in a relationship with a blonde beauty. Her name is Laura Rypa.

Seemingly an insuperable pair, they were deeply in love and most things together. However, they went their separate ways and deleted Instagram photos of the memories they have together.

The midfielder has obviously moved on. However, he seems not to fancy getting entangled soon.

It takes a set of amazing individuals to raise a man of Kenny’s quality. The individuals are family. We bring you facts about Weston McKennie’s parents. We will also make facts about his siblings and relatives available here.

John is the name of the midfielder’s dad. As was previously stated, he used to be a serviceman, specifically a staff sergeant.

Thanks to him, McKennie is popular with servicemen. It goes without saying that Kenny’s father has always been a supportive dad. McKennie must be lucky to have him as a dad.

Tina is the name of the player’s mom. She helps make important decisions in the family whenever her husband needs her to.

In fact, it was Tina who chooses Germany over Alaska when her husband’s options for military station posting arrived.

Also, Tina introduced young McKennie to the coach of FC Phönix Otterbach where he began his journey in football.

The soccer star has just two siblings. They include an older brother John and a little-known sister. His brother is a firefighter who has an interest in real estate.

In addition, he has a wife with a daughter. See the name of his wife and daughter under the next heading.

Away from Kenny’s immediate family, he has a niece known as Naomi and a sister-in-law, Mimi. They are the daughter and wife (respectively) of his older brother.

We are still optimistic about getting our request for details about the soccer star grandparents fulfilled. Also, we are keen on knowing who the player’s uncles, aunts, siblings, and relatives are.

Kenny is the individual with who you’ll love to be friends with. The soccer genius possesses qualities and interpersonal skills that endears him to make friends.

As a matter of fact, he is jovial, loves cooking, and doesn’t have a hard time learning new languages.

In addition, he knows how to party hard. He loves equity, hates injustice, and once wore a ‘Justice for George’ armband to pay respects to tragic George Floyd.

Also, the Texas native has no problem sharing details about his private and personal life. However, he sparingly does so because he understands the importance of moderation.

Picture this, you play in one of the top five leagues in the world, earn 2.95 million euros annually, and have an endorsement deal with Adidas. What could surpass your purchasing power aside from a trip to Mars in Elon Musk’s Space X project?

Welcome to the world of McKennie. He is just 22 but has a net worth of 3 Million Euros and can afford almost everything he desires. Cars, houses, you name it. He has them all.

The only problem at hand is that he doesn’t have enough time to enjoy his wealth. Football is a game of commitment, and Kenny has close to a decade to spend on the pitch and earn more of course.

Congrats, you made it this far. To wrap up this engaging article on Weston McKennie childhood story and biography, here are little-known or Untold facts about him.

Since you started viewing Weston McKennie’s Bio, this is what he has earned with Juve.

The Texas native is yet to give us a clue whether he believes in the existence of a supernatural being or not. However, the odds are in favor of him being a believer, specifically a Christian.

You might never understand how underrated Weston McKennie is until you see his FIFA ratings of 76/85. Hopefully, authorities are aware of it, and an upward review is very much imminent for him and others like Jesus Ferreira.

When McKennie moved to Schalke for the first time, his parents, most especially his mother, gave him a stern warning that she won’t tolerate any diva-like behavior from the soccer star as he scales the Bundesliga heights.

This partly explains why McKennie is humble.

“I know exactly who I am and where I come from. Also, My mom would bust my chops if I suddenly started behaving like a star.” He once revealed.

Thanks for reading this informative piece on Weston McKennie’s childhood story and biography. We hope that the inspiring life story of the Texan at Juventus Court has inspired you to believe in the importance of making the right decisions.

Just like Weston McKennie’s parents helped him choose a move to Europe over other juicy offers in the stateside. It behoves us at this juncture to commend the player’s parents for their support to his career in words and deeds.

At Lifebogger, we take pride in delivering childhood stories and biography facts with accuracy and fairness. Please stay tuned for more United States Soccer Stories from LifeBogger. That of Jozy Altidore, Kellyn Acosta and Ricardo Pepi would interest you.

If you see anything that doesn’t look right in Weston McKennie’s Bio, do well to contact us or leave a comment.