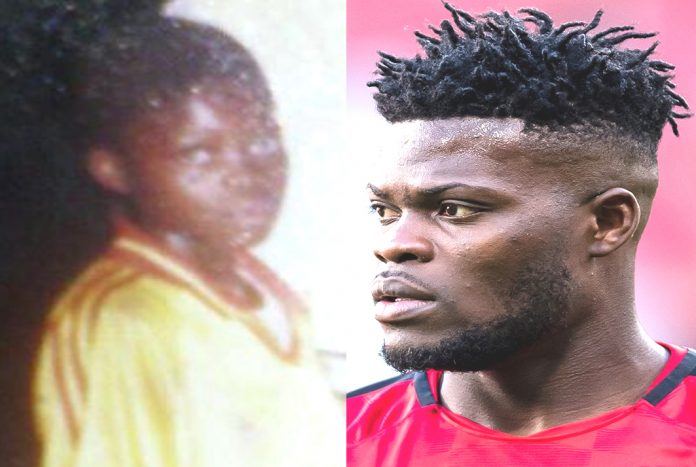 LB presents the Full Story of a Football Genius who is best known by the nickname; “Senegal“. Our Thomas Partey Childhood Story plus Untold Biography Facts bring to you a full account of notable events from his childhood time to date.

Yes, everyone knows he is a solid, powerful, and fast-moving defensive midfielder with an eye for goal. However, only a few consider Thomas Partey’s Biography which is quite interesting. Now without further ado, let’s begin.

Starting off, his full names is Thomas Teye Partey. Thomas Partey as he is often called was born on the 13th day of June 1993 to his mother and a look-alike father, in the town of Odumase Krobo, Ghana.

Below is a photo of his lovely parents whose names remains unknown as at the time of writing.

Thomas hails from a poor but humble family background. His father was a local football coach while his mum was a petty trader. With his mother and father, they are eight in numbers in his Partey family and Thomas is the oldest child.

According to Citifmonline, His mum had three children before meeting with his dad. Early on, Thomas together with his brother, Frank spent quality time with their dad who was a football lover and trainer in his own Ghanian local team in the town of Odumase Krobo.

Having a football-loving coach as their dad, it is only natural for the love of the game to be instilled in little Thomas and his brother, Frances. Both were the main identities of their father’s local team.

For both brothers, their ambition of becoming professional wasn’t just a passing fancy. Early on, Football became seen as a golden tree and hope for solace in ending poverty in the Partey family.

Thomas started playing football at his dad’s training base (Krobo) until the age of 10 before moving to Ashaiman. While playing for the team, his father gave him the nickname “Senegal”. This was because his son reminded him of a friend with the same name.

As Thomas continued to develop, he began to nurse the dream of traveling to Europe in a bid to make monies so he could take care of his family. Such desperation saw Thomas seeking for sponsors and attending football trials.

Thomas Partey’s parents had several failed attempts to raise money to prepare for his son’s trip to Europe in case an opportunity came. It got to a point his father had to arrive at the decision to sell his property.

Thomas was given his chance to move to Spain when he was observed by an agent who saw him standing out in a football competition.

Although there was someone better than him, a forward who scored all the goals in that memorable match.

Despite being the best player, he bluntly refused an offer to travel for Europe instead insisting he wants to remain in Ghana to play for a bigger club. According to Thomas,

“when the agent asked me what I wanted, I said.. to triumph in football in Europe so as to help my family.”

Both Thomas and the agent agreed he would go to Spain for a trial. However, no Spanish team was discussed as it was a surprise package.

Thomas’ agent processed all of his papers while he had nothing to do other than to train, eat, slept and wait for that blessed day he would travel.

On that blessed day, Thomas and his agent got into a car, went to Accra, capital of Ghana where he was given his passport.

Shockingly, he was told he would travel that day without his dad or any member of his family being told. According to Thomas;

“My dad wasn’t aware, nobody from my family knew anything, nor that I was going that day, because if they were told then it would cause  lots of panic.”

Thomas finally traveled to Spain without the knowledge of his father, mother, brothers, sisters, uncles, and aunties.

Upon approaching, he realized he was to play with Athletico Madrid C. Speaking about his first day in Spain, Thomas told citifmonline…

“The first day was very cold trust me and let’s say we got there around 5:00 pm and had training around 6:00 pm. but I ensured I did well.”

Thomas played for Atletico Madrid C for about a month before moving to the B team where he met Oliver Torres and Saul Niguez.

At the B team, he got recognized by Diego Simeone and both established a good relationship with each other.  Because Thomas was that good, he sometimes got invited to train with the first team by the big boss.

Family Not Aware for Months:

Did you know?… it took about seven months before anyone could realize Thomas wasn’t in Ghana. Partey went on to say that his parents accepted his decision when they finally found out. Speaking about that, he once said…

“My father always was okay with my decisions because as he had already raised monies for me by selling his house. it cost him a lot. In the second month of my stay in Spain, he sent me monies for me to buy boots and for my upkeep.”

Determination and self-belief were his watchwords throughout his stay at the Atletico Madrid academy B.

Upon becoming a senior player, he was shipped out on loan where he still impressed, a feat which convinced Diego Simeone to get him quickly to the senior team sheet.

After impressing at his loan move to Mallorca and Almería, Thomas got a callback and was integrated into Athletico Madrid senior team by Diego Simeone.

With the Athletico Madrid team, he went on to win the UEFA Europa League and the UEFA Super Cup.

As at the time of writing, Thomas has proven to football fans in Africa that he is the next beautiful promises of his Ghanian generation after Michael Essien. The rest, as they say is history.

Behind the successful African footballer, there exists a glamorous girlfriend pictured below whose name is Oheema.

Thomas met his lovely girlfriend while playing for Tema, his local club in Ghana. Just like Nelson Semedo, Thomas has decided to stick with his African Family roots when it comes to dating and his love life.

The Ghanian midfielder once shared a sizzling photo on his Instagram page where he appears to be completely at ease enjoying a sunny holiday in Malta with his girl.

Without a doubt, Oheema is a stunning lady has won her boyfriend’s heart over and over and its only a matter of time before they get married.

Getting to know Thomas Partey personal life would help you get a complete picture of him.  Starting off, he is an African footballer with a Social and Humanitarian Conscience.

Just like Ngolo Kante, Thomas is someone with a kind heart who believes it is essential to catch his fellow youngsters back home young.

Thomas is one of the players who does not have his foundation (as at the time of writing), but he does not stop helping the needy whenever he can.

When it comes to the area of social responsibilities, the Ghanian love to get himself with the help of family members involved in humanitarian commitments.

The story of Thomas Partey’s family which denotes a rise from poverty to riches is one which is fascinating to learn about. Without a doubt, he comes from the most humble of beginnings and family origin.

The sacrifice of his family has inspired the many who train and play barefooted on the many dusty parks dotted across Ghana and the rest of Africa.

Even thou Thomas came from a poor family, his dad pictured below made sure his home always had something to eat.

Thomas’ dad who has refused to make his name public is more than just a foundation soccer coach. It’s only a wonderful father who would sell his property to ensure his son’s success.

Thomas Partey’s mother is a petty trader who despite her son’s wealth still engages in her provision shop business. This explains how humble and down to earth the Partey family members are.

Thomas mum was among those who could have probably stopped her son from journeying to Spain because of her fears.

Although, her attempt to create fears in her son could only be understood because she is a caring and loving mother. According to Thomas…

“Sometimes I listened to my mum and sometimes I don’t. I always do what I think is best and for that reason, I decided to travel without saying anything to anyone.”

Although her fears got the better of her, but Mama Thomas has realized her son actually did the needful. To date, there exists a strong bond between mother and son. 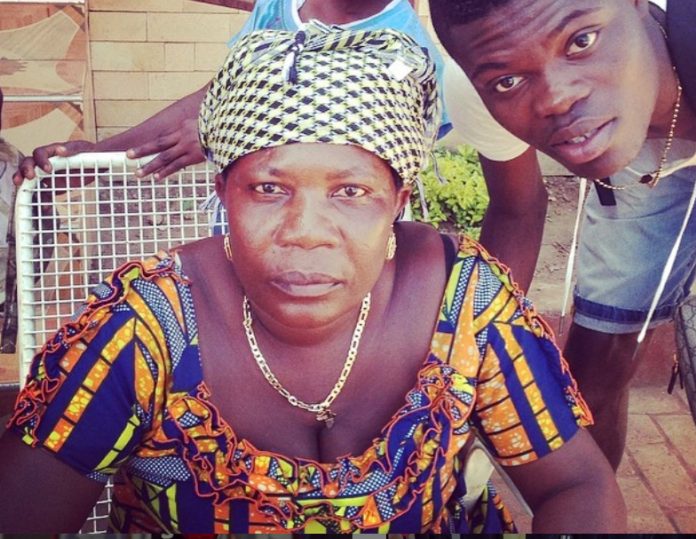 According to a Ghanian report, Thomas was born as the first child in a family of 8 children.

Little is known about his siblings except for Francis who also grew up alongside his brother in the same soccer trade.

As at the time of writing, Frances currently plays for Doxa Katokopia, a Cypriot football team. Footballing doesn’t rest in the males of the Partey’s family.

Even Thomas Partey sisters play football but not the highest level. Soccer has indeed become a family business.

Despite having a market value of £45.00m (Transfer Market Report), Thomas isn’t the type of footballer who lives the Lavish Lifestyle easily noticeable by a handful of pretty impressing cars, the booze, the swagger and the girls.

As observed in the photo below, his ability to deal with fame is directly proportional to the way he handles the soccer ball.

Thomas Partey lives a less glamorous, funny and a lower-middle-class life off the pitch. He is smart about managing his money. This means not spending like crazy, or changing his lifestyle.

Thomas Partey has for a long time had some of the best variety of other cool soccer hairstyles that go unappreciated. Some fans have considered his classic mohawk hairstyle is edgy and rebellious.

According to SportsBible, Atletico Madrid players were each being given a Hyundai car which they all tested before collection.

However, Thomas Partey’s test case was different. At first, couldn’t start his. When he finally did, he ended up driving carelessly, nearly running the car into the advertising hoarding. This left his teammates in hysteric.

At LifeBogger, we strive for accuracy and fairness. If you find something that doesn’t look right, please share with us by commenting below. We’ll always value and respect your ideas.