LB presents a Full Story of a Football Genius who is best known by the name “Jorge”.

Our version of Jorginho’s Childhood Story, including his Untold Biography Facts, brings to you a full account of notable events from his boyhood days. We then proceed to tell you how Jorge became famous.

The analysis of the Chelsea FC Legend involves his life story before fame, family background, relationship life, and many other OFF-Pitch facts (little known) about him.

Yes, everyone knows he was Maurizio Sarri’s right-hand man and first summer signing when he joined Chelsea FC in the summer of 2018.

However, only a few know much about Jorginho’s Bio which is quite interesting. Now without further ado, let’s Begin.

Starting off, his full name is Jorge Luiz Frello Filho. Jorginho was born on the 20th day of December 1991 to his mother, Maria Tereza (an ex-female amateur footballer pictured below) and a relatively unknown father in the state of Santa Catarina, Brazil. 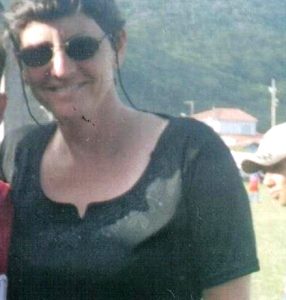 Declaration Before His Birth: Before Jorginho was born, his mother Maria promised herself that if she gave birth to a boy, she would do anything to ensure the baby becomes a professional footballer.

Those words came out of pain and bitterness for Maria, who herself had an unfulfilled football career that ended at an amateur level. Behold, all things went equal. She gave birth to the Jorginho we know today.

Growing Up: Jorginho grew up with his parents in the port of Imbituba, a coastal town in southern Brazil.

His relatively unknown dad was known to be very strict in every sense of the word. At the age of six, little Jorginho saw his parents having constant marital issues, which led to them divorcing. 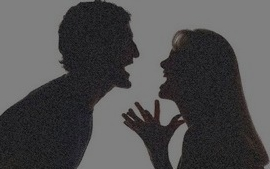 At some point in time, his father boldly walked out on the family, leaving little Jorginho and his mother to survive by themselves, having hardly any money.

Painfully, Any child who has lived through a parental break-up will know only too well the deep emotional pain it can cause. 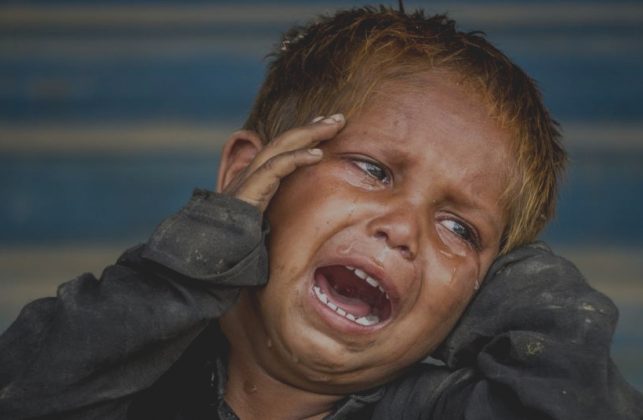 For Little Jorginho, seeing his parents’ divorce had on him, damaging psychological consequences, which he had endured throughout the latter part of his youthful life.

After the divorce, Jorginho’s mother reached out to her parents in Italy who advised her to relocate from Brazil to Italy with her son.

At the age of 6, in the year 1997, Jorginho relocated to Verona, northern Italy with his mother. 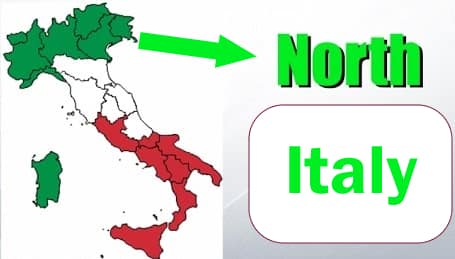 While in Italy, Jorginho’s mother got a job. She spent most of her day working as a cleaner to put food on the table and earn enough monies.

In a bid to start fulfilling her promise, part of these monies was used in buying her beloved son a ball. Below is Jorginho’s first ball, which was bought as soon as he learned how to walk. 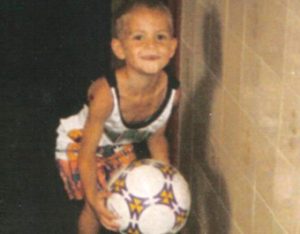 As Jorginho once put it;

There were no toys or games when I was younger, just a football. True emptiness caused by the absence of my father ended when there was football on my feet.

In a bid to start executing career plans for her son, Jorginho’s mother bought her son boots and other football accessories.

This further ignited his football passion thus leading him to enrol on the roster of a local youth team (pictured below) who gave him the opportunity to showcase his talent. 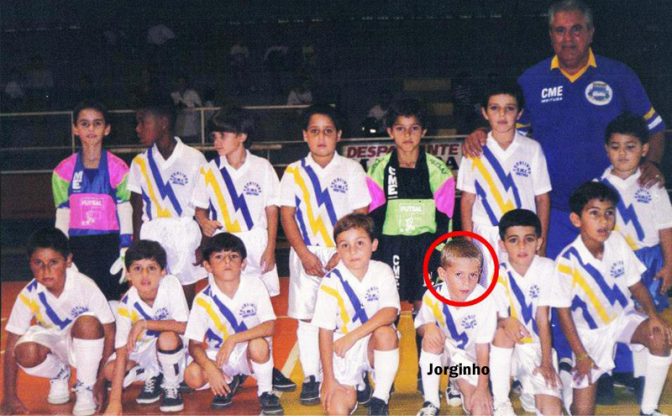 Jorginho sees his mum as the only person on earth who is worth as much as one hundred outstanding coaches.

As a kid, Jorginho leaned on his mother’s football managerial techniques even more than his trainers.

He would not have become a footballer without her who infected not just him, but his friends (pictured below) with the love for the game.

Back then, Maria Tereza Freitas made beach training sessions mandatory for her son Jorginho who likes to be accompanied by friends. 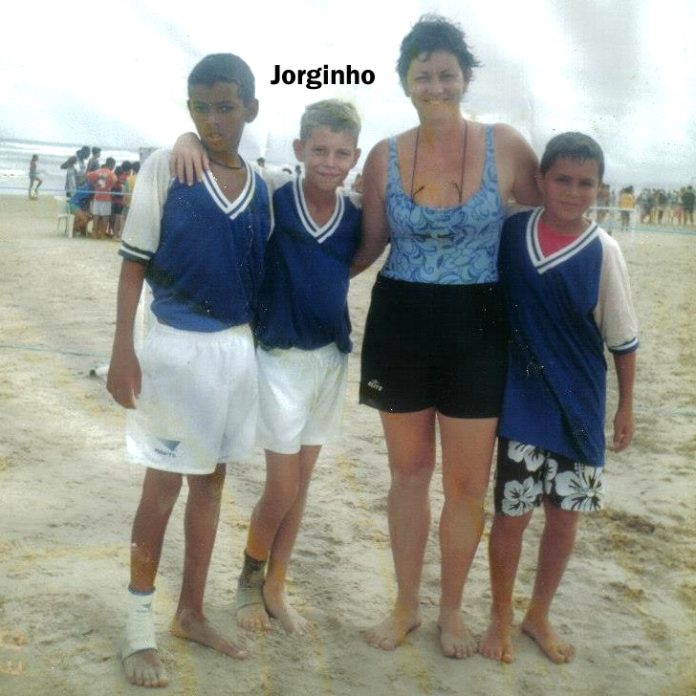 Jorginho’s life changed a few years later as he became popular among fans who knew much about his mum’s impact on his early career.

Despite that, he waited for the right time, which finally came.

The much anticipated day finally came when a group of Italian football-loving businessmen decided to create a football project which was aimed to promote youth football in Northern Italy. 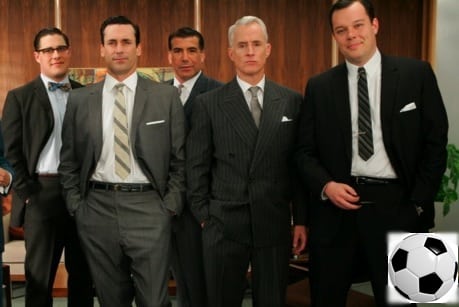 The businessmen invested ridiculous sums on establishing a soccer school located 180 km from the home of Jorginho.

Jorginho’s mother convinced her son to enrol so he can have a better chance at Europe.

Jorginho pictured below was among 50 boys who got separated from their families as they were selected to be part of the football project. 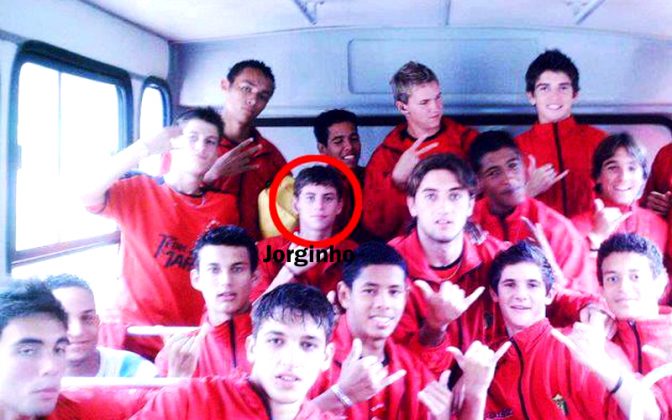 At the age of 13, he received paid his first weekly wage in football which he celebrated with his mum.

Both Jorginho and his mother pictured below celebrated his first youth contract where he earned just €18 a week. 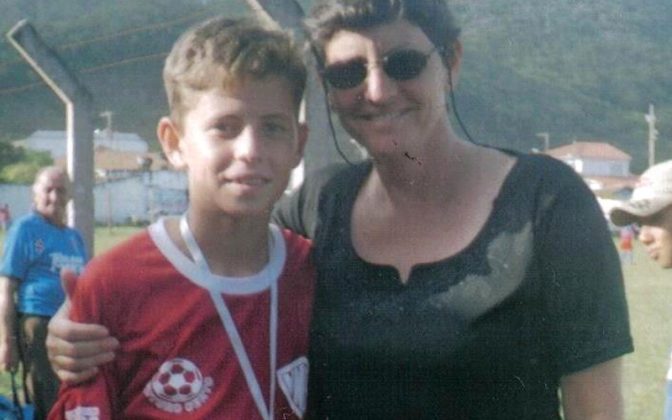 Jorginho used most part of his €18 a week monies to stay in touch with his mum as he went back to his training school.

Back then, his youth club was very far away from his home. For Jorginho, the memory of having to move 180 kilometres away from his mum still upsets him today. In a recent interview, he said;

“If I talk about it, I feel a lump in my throat. Out of €18, I used five euros for mobile credit which was used to talk to my family. It was like that for a year-and-a-half.

As Jorginho was finalizing his youth career, he went home upon the invitation by his mum to undergo rigorous one on one pieces of training in Brazilian Beach.

This was aimed at preparing him for contract offers from big clubs.

It didn’t take long before Jorginho got offered a youth contract at Hellas Verona. Upon acquisition, the club provided him with basic catering and a roof over his head.

Jorginho immediately responded with a good form. As a humble boy, his ability to deal with fame was directly proportional to the way he handled the ball. 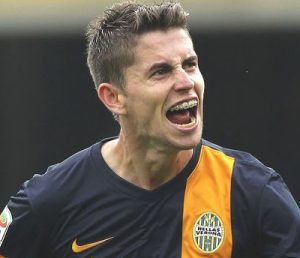 After leaving to play for AC Sambonifacese for an annual loan. Jorginho came back changed as he led his team to Serie A promotion.

This led to interest from Napoli, which he went on to sign a contract under then manager, Rafael Benítez.

At Napoli, Jorginho did not really shine until a year and a half later all thanks to one man named Maurizio Sarri, who assumed duty at the club and woke up the monster in him. 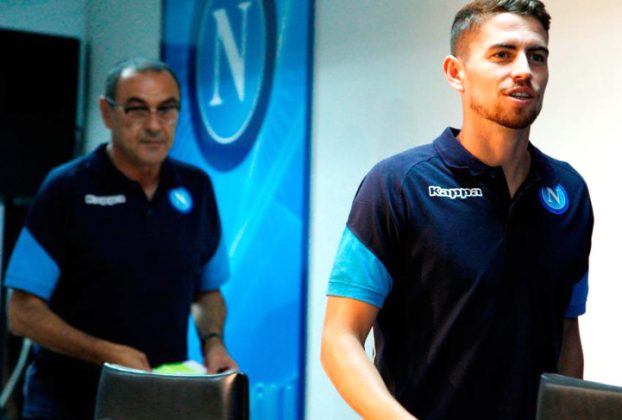 How His Form was discovered By Sarri: Already after his first training with him, Maurizio Sarri discovered Jorginho to be a technical player who can think faster than anyone else in the team.

According to Maurizio Sarri;

I saw a central helper. Someone with rare, intelligence and spatial vision. Jorginho has something special. He sees more than others.

Below is a photo of both friends. 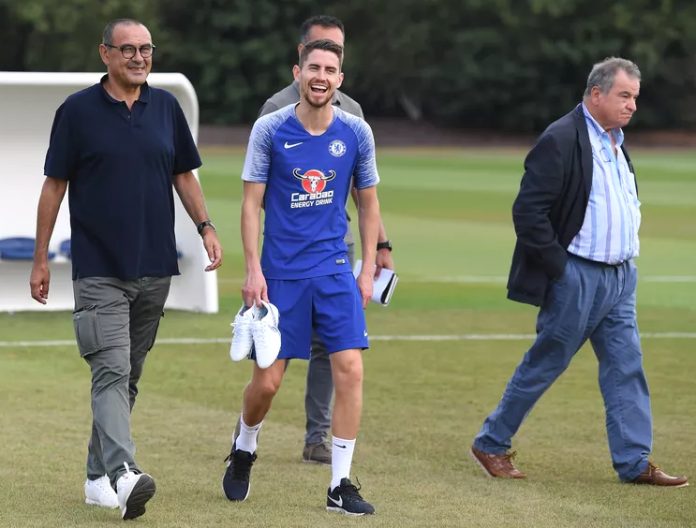 As we write, his mother, Maria is now the happiest woman in the world after fulfilling the promises she made to herself.

Today, she wipes out tears as she sees her son in action as he plays in the Premier League. The rest, as they say, is now history.

And behind almost a very successful Jorginho, there is a glamorous girlfriend who later turned into a wife.

Asides from his mum, Jorginho currently has Natalia as the love of his life. 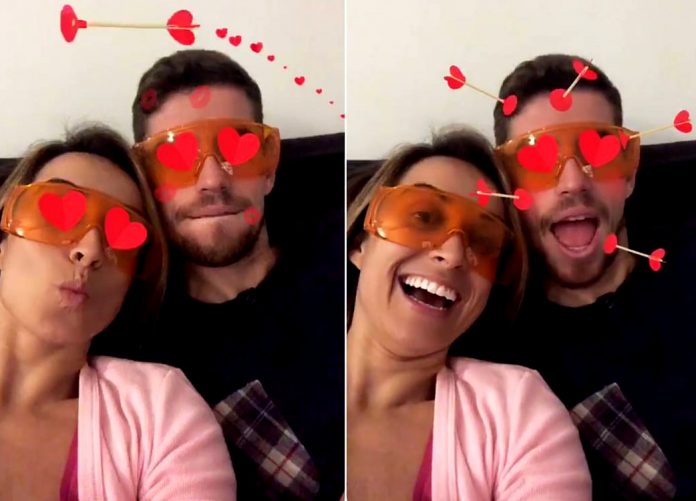 Together, both Jorginho with Natalia are blessed with a son named Vitor whose relaxing nature has made parenting much happier and less stressful for the lovebirds. 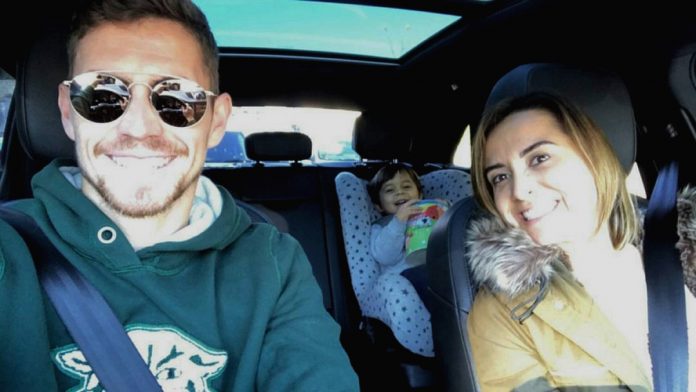 As seen from the photo below, it is Jorginho’s lifestyle off the pitch that really builds a complete picture of him. He is a good family man who gives priority to his wife and kids. 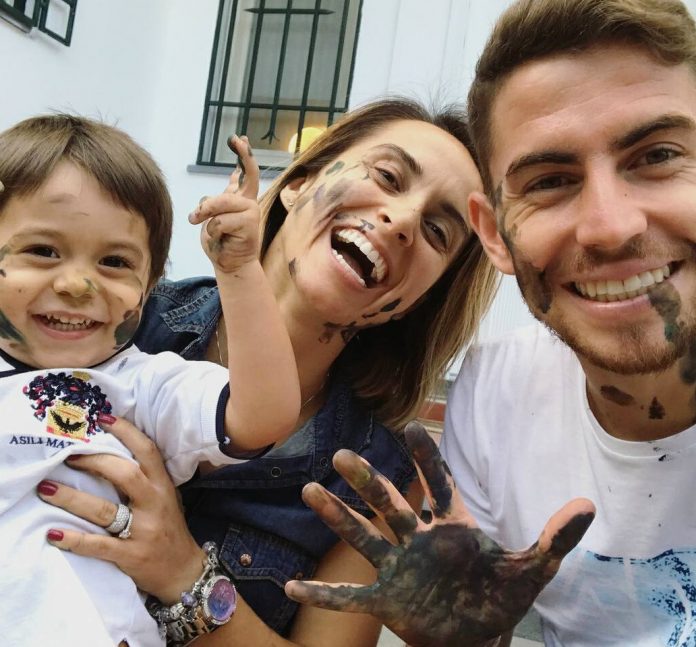 FACT CHECK: Thanks for reading our Jorginho Childhood Story Plus Untold Biography Facts. At LifeBogger, we strive for accuracy and fairness. If you see something that doesn’t look right in this article, please place your comment or contact us!.