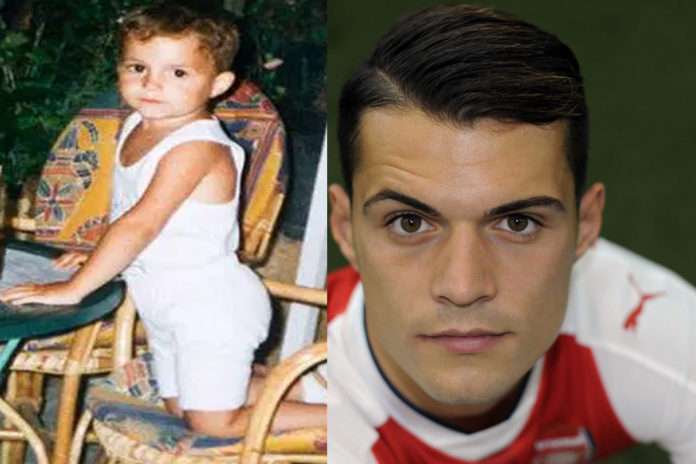 LifeBogger presents the Full Story of a Swiss Football Genius best known by the Nickname; ‘Xhakaboom’.

Our Granit Xhaka Biography, including his untold Childhood Story, brings you a full account of notable events from his childhood time right to when Xhaka became famous.

The analysis of the Swiss footballer involves his life story before fame, family life, relationship life and many facts about him.

Yes, everyone knows about his midfield abilities, but only a few have read Granit Xhaka’s Biography, which is quite interesting. Now, without further ado, let’s Begin.

For Biography starters, Granit Xhaka was born on the 27th day of September 1992 in Basel, Switzerland.

Xhaka was born to his Mother, Elmaze Xhaka and Father, Ragip Xhaka.

Results from our research show that his Albanian parents were originally from Kuršumlija, Serbia. Let’s not forget that Serbia is the home country of Nemanja Matic.

From the most humble of beginnings, the youngster’s journey to the top was first preceded by his parents’ own journey to safety, fleeing a country on the brink of civil war.

Xhaka’s parents knew that they needed a fresh start, and in 1990, they emigrated to Switzerland. Their first son, Taulant, would be born in Basel in 1991, with Granit following 18 months later.

As Granit Xhaka puts it; “My dad showed an incredible strength and Taulant, and I have grown up with his mental strength,” Xhaka says.

“We had this idol, this role model, who taught us that you have to be strong to achieve things. So we grew up very strong. It’s why on the pitch, we have this mental strength to get over things and really go for it.”

Xhaka owes everything to Switzerland and the opportunities he was afforded there. Like being in their national football team comprising Yann Sommer, amongst others.

More importantly, Xhaka cannot and will not forget his Kosovo-Albanian roots, which continue to touch him to this present day.

Who is Leonita? Granit Xhaka’s Lover:

The stunning WAG, pictured below, is no other person than brunette Leonita, the lady of enamoured beauty.

She is the pretty wife of Granit Xhaka. Like Xhaka, Lekaj comes from a Kosovo Albanian family.

Xhaka first met Leonita while he was still playing for his previous club, Borussia Monchengladbach.

She was working for the Bundesliga team and caught the eye of the Switzerland international. Indeed, she is very beautiful. 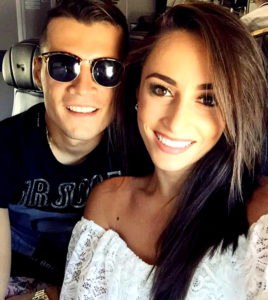 Asides from taking giant icecreams, both lovers love going to Miami for their summer holiday. 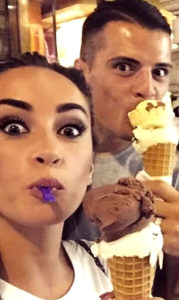 In April 2017, Granit Xhaka once donned a fancy brown suit and got down on one knee to ask his partner for her hand in marriage. Leonita Lekaj said yes, and she’s celebrated on Instagram.

Xhaka also posted the identical photo on his Instagram account with the following message: She said YES. A golden ball is a miracle; a golden wife is a paradise! Mr & Mrs Xhaka.

Granit Xhaka took his time in the off-season to wed his long-term girlfriend Leonita Lekaj.

The Switzerland international announced the big news by posting a ‘Mr and Mrs’ photo with his bride on Instagram. Their marriage happened in July 2017.

Granit Xhaka and Leonita Lekaj have been living happily ever after. 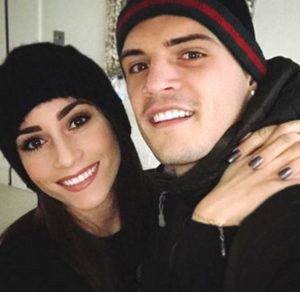 This section tells you more about members of Granit’s household. Now, without further ado, let’s begin.

Ragip Xhaka was a proud Kosovarian who once protested to the then Communist Yugoslavia rule in Kosovo that he and his people had the right to exist. 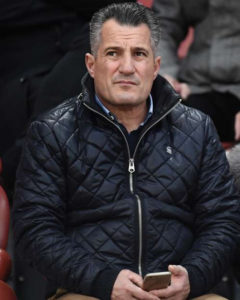 He stood up for their rights and they were basic democratic rights –necessities, such as being able to vote.  It was strictly political. Xhaka said,…My dad was asking:

Ragip Xhaka was later arrested by his government. It was not only him. There were other people arrested, including his uncle, who had been jailed a number of years earlier. He got 15 years. Ragip was sentenced to prison for three years and a half.

“As far as I know, his first few months in jail were OK,” Xhaka says. “But then the beatings started.”

Xhaka Sr’s crime had been to take part in demonstrations against the communist central government in Belgrade. It was 1986, and he was a 22-year-old student at the University of Pristina in Kosovo, which was then an autonomous province in Yugoslavia.

He would be arrested and summarily given a six-year sentence. Xhaka Sr shared a cell with four other men and he would be let out once every day – for 10 minutes.

Xhaks continued…“As his son, the story is something that touches me very deeply – it is really, really in my heart,”

Xhaka also continued… “To describe my dad properly, you have to appreciate the full depth of it. It’s so tragic. I sometimes ask him: ‘Tell it to me again,’ but I still don’t think he has revealed all of it.

There have always been silent moments where I’ve felt he has swallowed something and not spitted out the truth. Maybe it was just too much, and he wanted to spare his kids all the grief.

One of the strange things is we don’t know why Ragip Xhaka was released early from his sentence but he was let go at the same time as his uncle.

None of the family knew about it until they turned up on the doorstep. Xhaka’s feeling is that they took a pact to go along with the prison rules, keeping their mouths shut and never causing any problems.

This is why they released them because they thought: ‘There’s no problem with them anymore.’ But no one is sure about that.

Ragip Xhaka, after his prison release, was empowered by a determination to find a better life, one that would one day be embodied in the spirit with which his sons would fight their own battles on the football field.

He migrated his family from Podujevo, District of Prishtina to Switzerland in 1990. 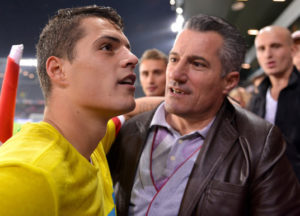 One of the most revealing details about Xhaka’s mum is that she only met her husband just three months before his arrest and jailing. 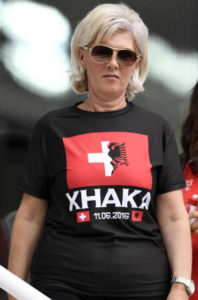 “I have such incredible respect for my mother. I have never heard of a woman being together with a man for three months – at that young age – and then waiting for him for three and a half years. My mother is just an incredible person.”

When Elmaze Xhaka sat in the stands alongside her future daughters-in-law, she wore a half-and-half Switzerland/ Albania shirt.

Although she’s from Switzerland, but also a neutral fan because her two sons play in different countries. She and her daughter-in-law are very close. 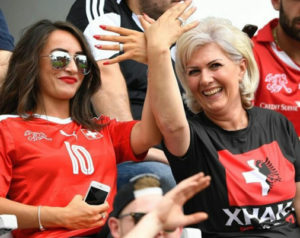 Taulant Xhaka is also a professional footballer and plays for FC Basel and the Albania national team. (As at the time of writing). 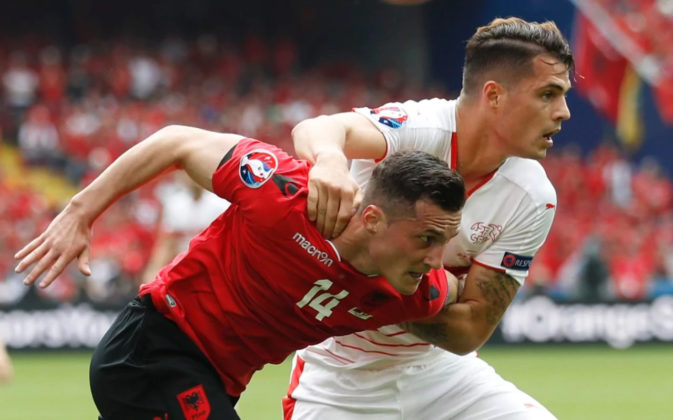 Agnesa Xhaka is the kid sister to Granit Xhaka, who is also her favourite brother.

One day, Granit Xhaka sponsored her birthday. Agnesa Xhaka wrote sweet words about her brother and followed them with a picture. But what attracts more attention is the comment she has written down the picture. It says…

“I love you very much; you are the best brother in the world,” she writes, implying that she describes her immediate big brother, Granit, as “the favourite”.

This can be justified by the fact that Granit is far more loved than his elder brother. Meanwhile, Taulant’s Instagram does not have any posts yet similar to this one.

Xhaka has the following attribute to his personality. 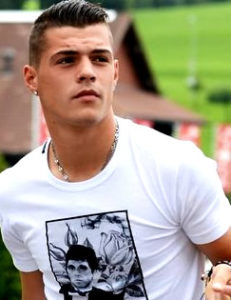 Xhaka’s Weaknesses: He could be indecisive. More so, he fears confrontations and has the habit of carrying a grudge.

What Granit Xhaka likes: Gentleness, sharing with others and outdoors.

In general, Granit Xhaka is peaceful, fair, and they hate being alone. The partnership is very important for him.

Xhaka began his career at his hometown club, Basel, winning the Swiss Super League in each of his first two seasons.

He then moved to the Bundesliga team Borussia Mönchengladbach in 2012, developing a reputation as a technically gifted player and natural leader alongside criticism for his temperament.

Xhaka was made the captain of Borussia Mönchengladbach in 2015 at the age of 22, leading the team to UEFA Champions League qualification for a second successive season.

He completed a high-profile transfer to Arsenal in May 2016 for a fee in the region of £30 million. The rest, as they say, is now history.

Borussia Mönchengladbach had their worst-ever start to the 2015/16 season when they lost the first five league games to leave them dead last.

With their captain Tony Jantschke injured, the first thing Schubert did was to hand the armband to Xhaka just a few days before his 23rd birthday.

He was also appointed the captain of his country, Switzerland. 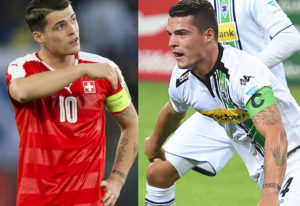 “We chose Granit because he is a very important player for us,” Schubert had said. “He has quality but must also learn to take responsibility.”

The move worked wonders as Mönchengladbach stormed back into the race for Champions League spots. Xhaka led from the front, even scoring in his first game as captain.

Under his leadership and Schubert’s tactical nous, Mönchengladbach eventually finished fourth and qualified for the Champions League playoff round.

To lead a team at just 23 is no joke. Wenger did the same thing with Cesc Fabregas, and even though he didn’t have the necessary support in terms of quality players around him, the Spaniard did inspire them to top-four finishes and Champions League football.

Xhaka can be a player entrusted with leading the team when the time comes, and Wenger obviously needs a few more experienced and trustworthy heads in the middle of the park.

Thanks for reading our Granit Xhaka Biography, including his Childhood Story.

At LifeBogger, we strive for accuracy and fairness to bring you Swiss Football Stories. Surely, the Life History of Yann Sommer and Ruben Vargas will excite you.