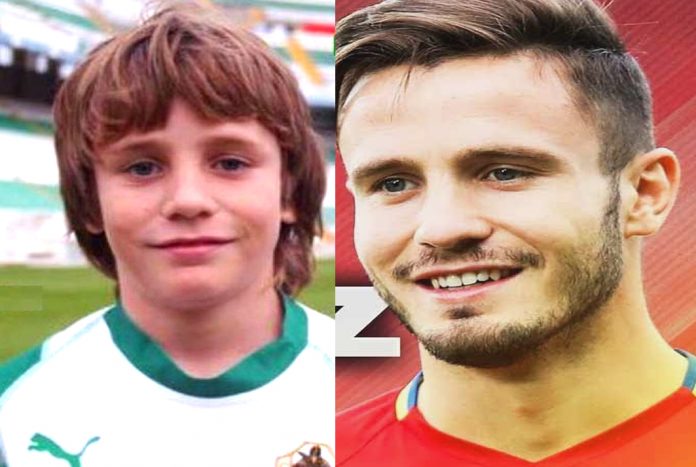 Lifebogger presents the Full Story of a Football Genius who is best known by the name; “Niguez”.

Our Saul Niguez Childhood Story plus Untold Biography Facts bring to you a full account of notable events from his childhood time to date.

Yes, everyone knows he, alongside Jorginho and Mateo Kovačić, were once among the best midfielders in Europe. However, only a few consider Saul Niguez’s Biography, which is quite interesting. Now, without further ado, let’s begin.

For starters of his Biography, Saul Níguez Esclapez was born on the 21st day of November 1994 to his mother, Pilar Esclápez and father, José Antonio Ñíguez in Elche, Spain.

Find here, a photo of Saul Niguez’s parents, who are proud of the accomplishments of their last-born child.

This tribe speaks the Valencian language and it’s 4.9 million inhabitants constitute the fourth most populous ethnic group after Andalusia, Catalonia and Madrid.

Niguez comes from a sporting household, a family in which football runs in the genes of all-male sons.

Did you know?… Saul’s father José Antonio pictured below played as a striker for their hometown club Elche for several years.

It was hard for José Antonio to deal with retirement after his football career was over. The ex-footballer, upon retirement, decided to continue living his dream through his sons.

Saul Niguez and his two big brothers namely Jonathan and Aaron, all grew up to becoming footballers like their father.

The personality traits of being the youngest child made Saul Niguez to be the most overly ambitious and highly competitive child in the family. Among his brothers, he was the one who had the strongest fighting spirit.

Saul Niguez’s love for soccer saw his dad enrolling him into the academy roster of their hometown’s club Elche CF which gave him the stage to showcase his talents.

Niguez made an immediate impact in Elche which saw him rising quickly above his age group ranks to become his team’s captain.

Saul Niguez made a lot of sacrifices in the academy which saw him edging out among his peers. There were times he had to miss birthday parties.

But on the flip side, he was very happy to do what he loved. Being the best among his age group made him a subject of attention for Real Madrid academy, who acquired him in the year 2006.

The youngster was bullied when he was at Real Madrid Academy: 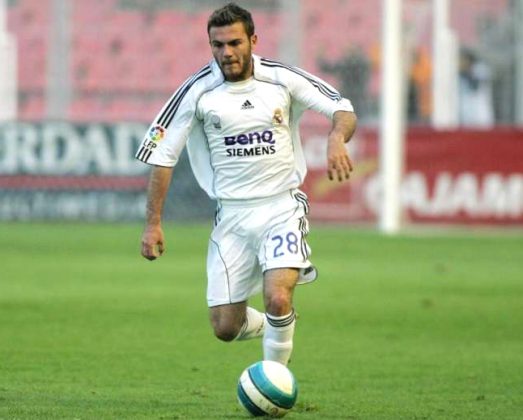 Saul Niguez became a Real Madrid youth player after being captured by the club at the age of 11 in the year 2006.

Saul never had the best time at the academy, despite being nurtured with utmost care.

According to Sportskeedia, Saul Niguez claimed he was the subject of bullying and harsh treatment by people unknown to him. In an interview with ‘El Mundo’, he said,

“During that year with Madrid I learned many things, I matured a lot. It was also a difficult time for me too because many non-sporting things were happening.”

Saul claimed that unknown persons robbed my boots, food and stopped him from going to training for two weeks.

These evil persons also framed him up by passing a letter to his youth manager, which falsely claimed he wrote it.

It got to a time little Saul couldn’t endure these tournaments. After consultation with friends and family members, he made the decision he was going to leave the club. This was in the year 2008.

Joining Real Madrid neighbours from Atlético Madrid was a wise decision given how Saul has developed to date. While at Atlético Madrid’s youth academy, Saul got the best treatment.

He went on to appear in more than 200 competitive matches for the club’s youth team and avoided attractive destinations of Manchester United and Arsenal.

As at the time of writing, Saul Niguez has cemented his name in the Atlético Madrid’s hall of fame thanks to his collection of titles. 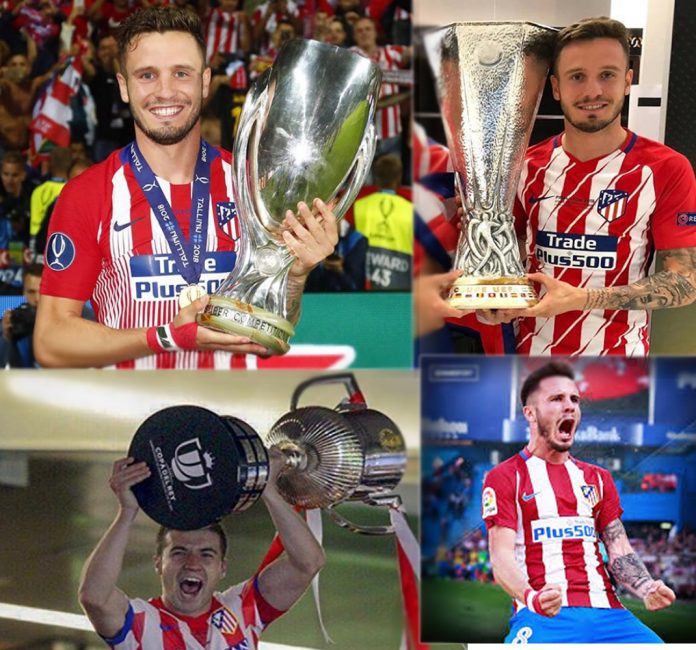 Behind the successful footballer, there is a stunning girlfriend in the person of Yaiza whom, if not mistaken, you will think is Celine Dion’s sister.

Judging from the photo above, you’ll agree with the fact that being a handsome player deserves an equally beautiful wag.

Yaiza is a beautiful brunette who oozes confidence in every one of her snaps. She is a selfless person who does nothing more than providing emotional support for her man even though it means putting her own life on hold.

The fact that both lovers have been dating for a while leaves no doubt that a wedding for could be the next formal step.

Getting to know Saul Niguez personal life would help you get a complete picture of him. Starting off, he is someone who values three things most in his life. They are; his family, girlfriend and dogs, one of them is pictured below. 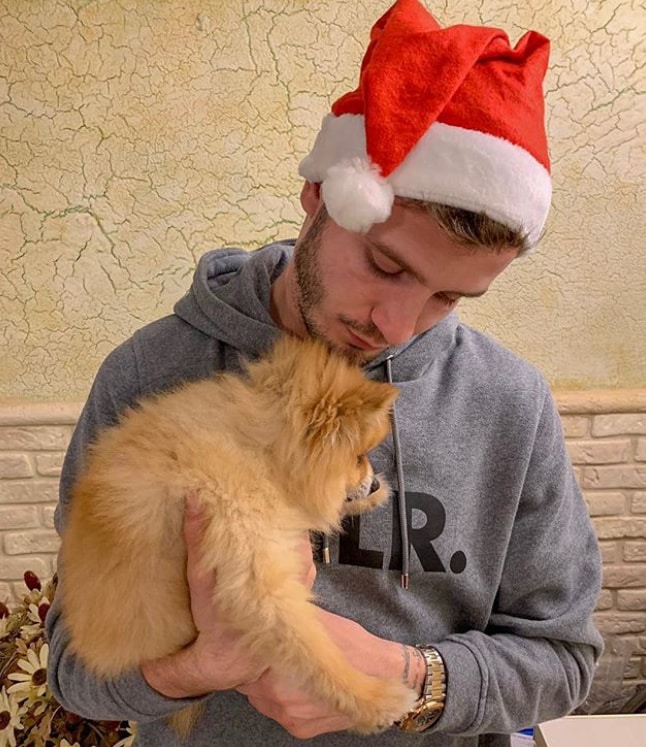 Soccer players, just like the rest of us, love their pets and Saul Nuguez isn’t an exception. Even thou there is a saying that there is no loyalty left in the modern game, this surely doesn’t take into account the strong bond shared between Yaiza, Saul, and his dog.

Did you know?… When Saul Nuguez wife Yaiza isn’t busy cheering for her man, she spends most of her time taking care of their dogs whose names are; Boris and Thaila. 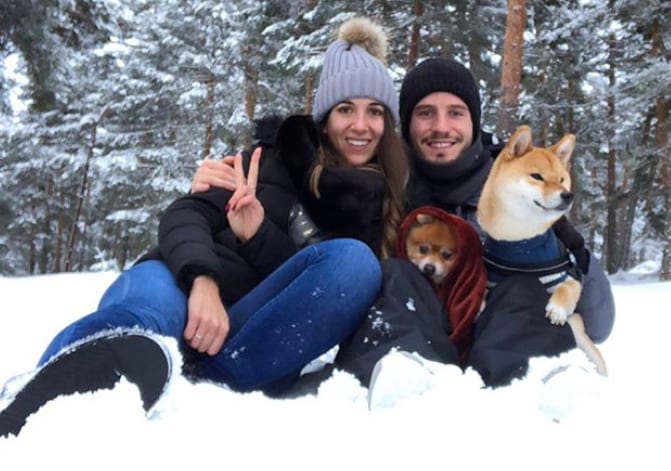 Saul comes from a humble family background, one whose members see meaning in their soccer careers and nothing else.

Both Pilar Esclápez and José Antonio Ñíguez currently live a happy, successful lives thanks to their ability to get the best out of their children. Birthday moments defines the most celebrated time in the family.

The man in the middle, Aaron is Saul’s second to the eldest brother. He is six years younger than Saul. Aaron was raised through the Valencian academy youth system.

As at the time of writing, he plays as a winger for Malaysian club Johor Darul Ta’zim F.C.

Jonathan is the eldest of the Niguez brothers. He is 9 years older than Saul. Just like Aaron, he was also brought up in the Valencia youth system. Jonathan currently plays as a midfielder for Elche.

Throughout a look into his social life history, we observed that Saul isn’t the type of footballer who lives the Lavish Lifestyle easily noticeable by a handful of pretty impressing cars, booze, swagger, girls, a great house. He just prefers to look shinny outside football. 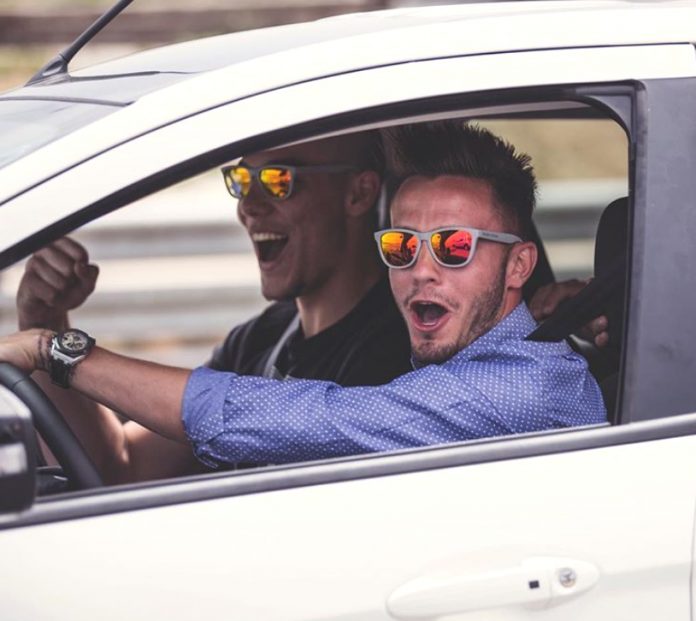 Once Placed Football Before his Health:

Did you know?… Saul Niguez once had to spend months in pain and discomfort, urinating blood. This was a time was being diagnosed with a kidney disorder. Even at that, all Saul wanted to do was to play football.

According to TheGuardian, it took the intervention of Athletico Madrid assistant coach in salvaging the situation. El Mono Burgos the former Athletico Madrid goalkeeper, looked Saul in the eyes and offered him advice.

For Saul, listening to German El Mono Burgos made sense as he spoke to him with experience as he himself was once diagnosed with cancer in 2003.

At that time, the doctors asked him to wait until Monday to remove the tumor. Mono did not want that as he insisted it should be immediate.

Saul Niguez has recently stated in an interview that he wants to stay at Atletico for life. A big reason came as a result of his respect for Diego Simeone.

Credit to Atleti Studio, Saul has proved beyond doubt he is named the “center of the park” midfielder who is never afraid to shot from distance.

Credit to Soccer Eleven, Saul has for long proven to be a master of “Barcelona style” as seen in his goal below. This explains why FC Barcelona as at the time of writing plot a €110 million raid on him.

FACT CHECK: Thanks for reading our Saul Niguez Childhood Story plus Untold Biography Facts. At LifeBogger, we strive for accuracy and fairness.