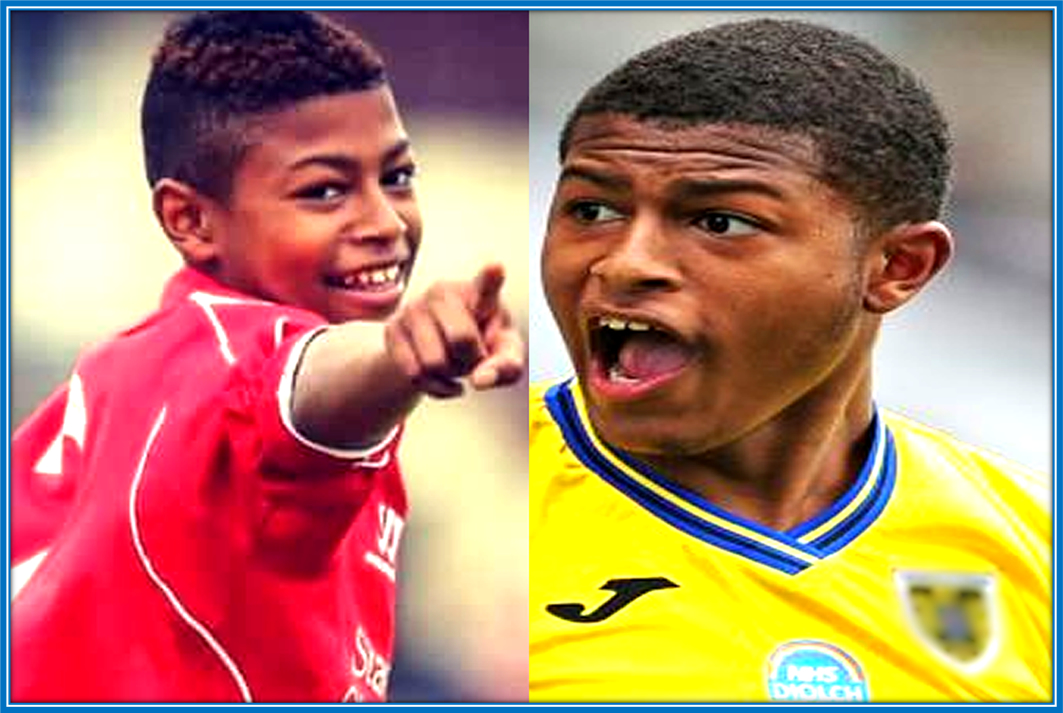 Our Rhian Brewster Biography tells you Facts on his Childhood Story, Early Life, Parents, Family, Girlfriend/Wife to be, Net Worth, Lifestyle and Personal Life.

In a nutshell, it is a comprehensive chronicling of Rhian Brewster’s Life Story, from his early days to when he became famous. Behold a brief picture summary of his Bio.

Yes, you probably know him as that one-time Liverpool wonderkid. Additionally, many football lovers acknowledge that he is a composed natural goal scorer. Despite these accolades, only a few fans know about Rhian Brewster’s Bio, which is interesting. Without delay, let’s begin.

For biography starters, his nickname is “Doc Brew”. Rhian Joel Brewster was born on the 1st day of April 2000 to his mother, Hulya Hassan and father, Ian Brewster in the suburban area of Chadwell Heath in Dagenham, England.

Young Rhian Brewster grew up alongside a sister Jaylece. He was only two years old when he began playing soccer after watching his dad play semi-pro soccer as a goalkeeper. He once told SportsJoe that:

“My dad told me that my happiest moments as a baby was whenever I had a ball, while my mom recalls that taking football from me was some nightmare because I wouldn’t let go.
I used to watch my Dad play with his friends ever since I learnt to walk. Looking back, I believe that I was just built with a love for the game.”

Here is young Rhian Brewster with Steven Gerrard after watching a game between Liverpool and West Ham at Upton Park. 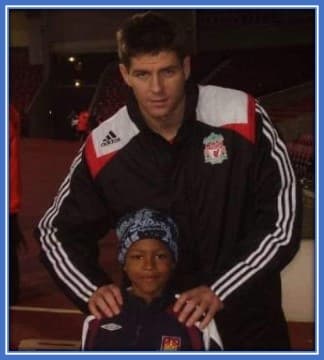 Anyone who listens to the forward tell tales of his life story or read up his bio would agree that he had a comfortable childhood. In fact, Rhian Brewster’s parents were middle-class citizens who had no problems with providing him and his sister the best of childhood experiences.

Thanks to being born in England, the soccer genius can confidently lay claims to being a British national. However, the results of research that we carried out to determine his family origins reveal that he can also identify as a Barbadian, Turkish or Cypriot. Yes, you guessed right; he is biracial and loving it!

The then soccer enthusiast was barely 6 years old when he began playing competitive football for Shield Academy YFC.

By the time Brewster was aged 7, his skill set and style found favour in the eyes of scouts from Chelsea, Arsenal, West Ham United and Charlton Athletic. He alongside Marc Guehi joined Chelsea and thus began his journey in Career Football.

There’s no denying the fact that Chelsea was important to the forward’s development, even though he only spent 7 years with the club. It was with the blues that Brewster developed his game under coach Michael Beale before he left for Liverpool.

Here is a rare photo of Doc Brew celebrating the first goal he scored for Liverpool. Like Todd Cantwell, he was exciting in his youth. 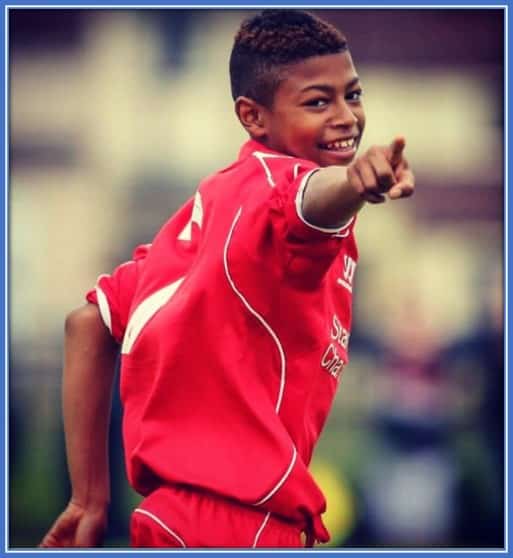 The then 14-year-old’s decision to leave Chelsea for rival Liverpool came after he realized that the big names he knew at the academy were yet to break into Chelsea’s first-team or secure promotion. He told SportsJoe that:

“I spent a lot of time trying hard to figure out why some unbelievable youngsters at the academy were suffering from stagnation. It later dawned on me that there weren’t available opportunities, even for the guys we thought would 100 per cent move up”.

While at Liverpool, Brewster rose through the ranks and made his first-team debut in 2016 during which he scored a hat-trick against Accrington Stanley.

He featured in youth side games and was named on the bench for big first-team matches, including the 2019 UEFA Champions League Final against Tottenham Hotspur.

Interestingly, Brewster collected a winner’s medal as Liverpool won 2–0 despite the fact that he had never featured in a league or tournament game with the club’s first team. Did we mention that he took the medal everywhere he went? 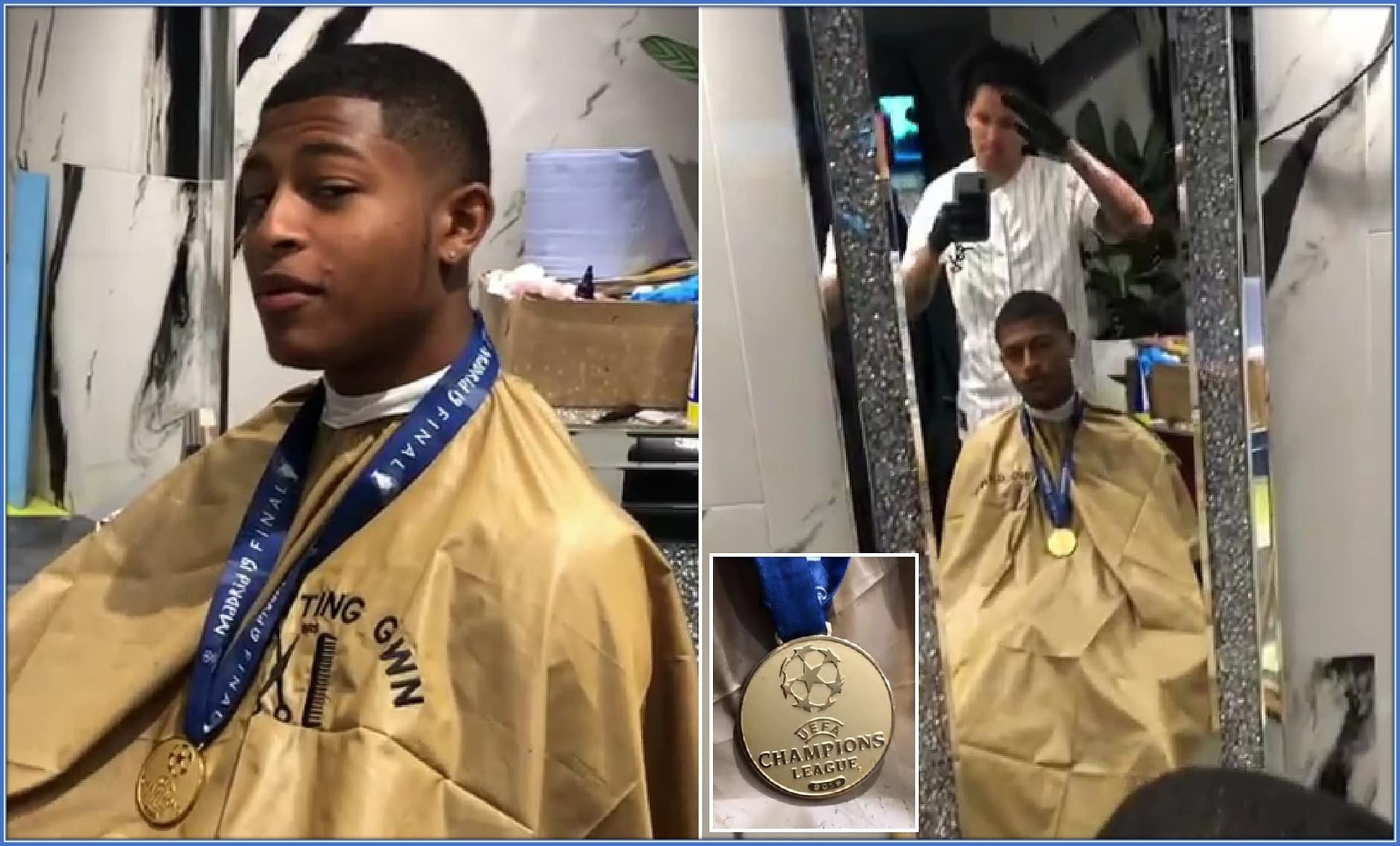 Fast forward to the time of writing this article on Rhian Brewster Biography Facts, the forward is plying his trade for Sheffield United. His arrival at the club follows an impressive loan spell with Swansea City and a super impressive return to Liverpool.

Whichever way things tilt for him at his new club, the rest, as they say, will always be history.

Who is Rhian Brewster Dating?

Doc Brew’s undying love for soccer makes many wonder whether he has any more affection to spare for a woman. This brings us to unending questions about Rhian Brewster Girlfriend. Does he really have one, or is he biding his time? 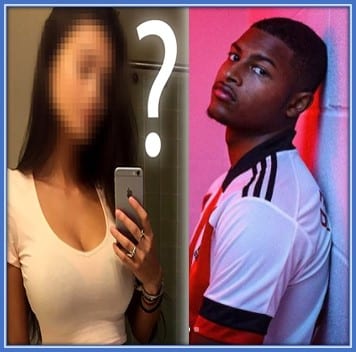 At lifebogger, we are aware that the forward is single and doesn’t have son(s) or daughters(s) out of wedlock. The way we figure it, content about Rhian Brewster’s girlfriend will eventually flood cyberspace whenever he chooses to date any lady.

Who are the people most cherished by Doc Brew and what did they do to have a special spot in his heart? We bring you facts about Rhian Brewster’s parents, siblings and relatives.

Ian is a dad to the soccer genius. The Barbadian national played semi-pro soccer as a goalkeeper during Brewster’s early life and later became a football manager. Brewster credits Ian for the selfless support he showed with every decision which the forward made.

Also, the forward recalls that his dad was always available to advise and push him to improve. Here is Rhian Brewster with his Big Dad, Ian who wishes his son, like Kalvin Philips, would get an England call from a non-big-six EPL club. 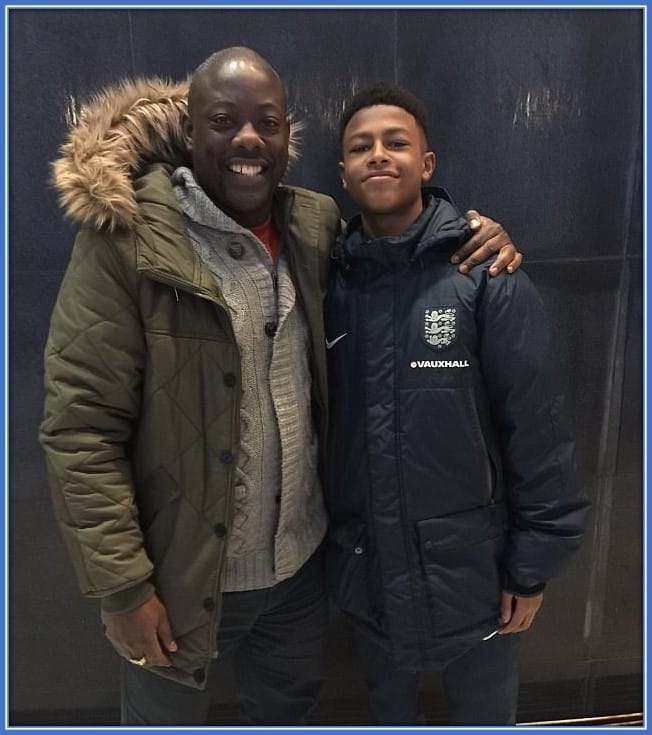 Hulya is the forward’s mom. The Turkish Cypriot mom has been into hairdressing since Brewster can remember. The mother of two loves her son immensely and also played sacrificial roles in his development. Brewster credits her for teaching him that while he works hard, he should learn to appreciate the things which he doesn’t realize are worth celebrating.

We can’t possibly miss talking about the forward’s only sister, Jaylece. She is his only sibling and arguably his biggest fan. She was even present when Brewster helped England win U17 World Cup semi-final match against Spain, a tournament in which the forward emerged as the highest goal scorer.

Away from the forward’s immediate family, there aren’t records of his ancestry, particularly as it relates to his maternal and paternal grandparents. Similarly, he has uncles, aunts, cousins, nephews and nieces who are yet to be identified.

Who is Rhian Brewster?…. First and foremost, there are a few words that best describe who the forward is outside soccer. To start with, Brewster is a laid-back individual who loves to have a good laugh and can be childish. He is also unassuming but assertive. What’s more, he is not only eloquent and authentic but magnetic and far from sheepish.

Anyone who listens to him speak would have a hard time trying to figure whether the striker is a 20-year-old or a 70-year-old man filled with wisdom. Whenever Brewster is not on the pitch, you can catch him having fun with video games, travelling and spending quality time with family and friends. Our boy must be also big on tourism. 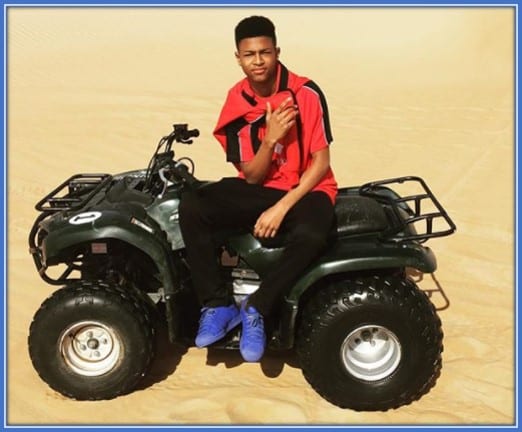 Regarding how the Striker makes and spends his money, his net worth in 2020 is estimated at $1 million. We can bet that salaries and wages make up the bulk of his wealth while his sponsorship by Adidas makes him confident of a secured financial future.

Although details of Brewster’s contract agreements with Sheffield are yet to be made public, his earnings at the club are expected to be an improvement of the 177,000 pounds per annum that he used to earn at Liverpool. Thus, it will only be a matter of time before the youngster starts flaunting exotic cars and expensive houses to match his status as a valued Premier League star.

To wrap up this engaging write-up, here are Untold or little-known facts about the Striker.

This is what Rhian Brewster has earned since you began viewing his Bio.

The forward has an embarrassing low rating of 70. He must have reached out to complain about the numbers which do not reflect reality. As we envisage for Ollie Watkins, we are also optimistic that Brewster will get a quick rise in his FIFA stats. 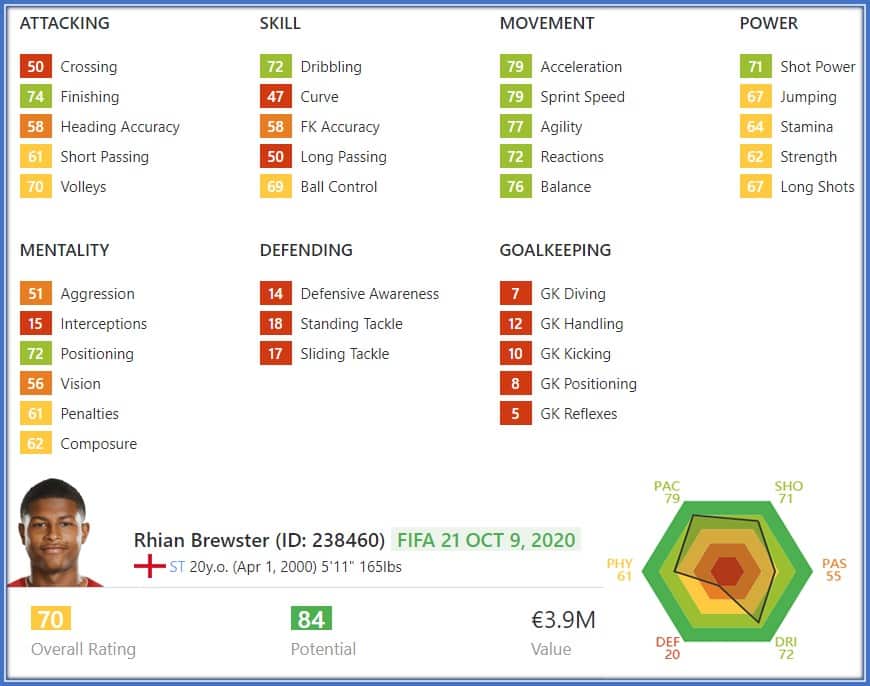 Brewster strikes us as a Christian, even though he has made no statement or gesture to suggest that. Do you have a differing opinion? You’re welcome to tell us in the comment section.

Did you know that Brewster is eligible to feature for 4 countries? Yes, the striker has made a few international appearances for England’s youth team. However, he is yet to pledge his allegiance. Thus, he can show up for Turkey, Cyprus or Barbados if he wishes to.

The youngster does have a thing for tattoos. A close look at his left arm reveals that he has tats. The body art has wordings that reads “your hate makes me unstoppable”. Those words indicate that the striker chooses not to be let down by racial abuse which he often suffers. Behold Rhian Brewster’s tattoos. 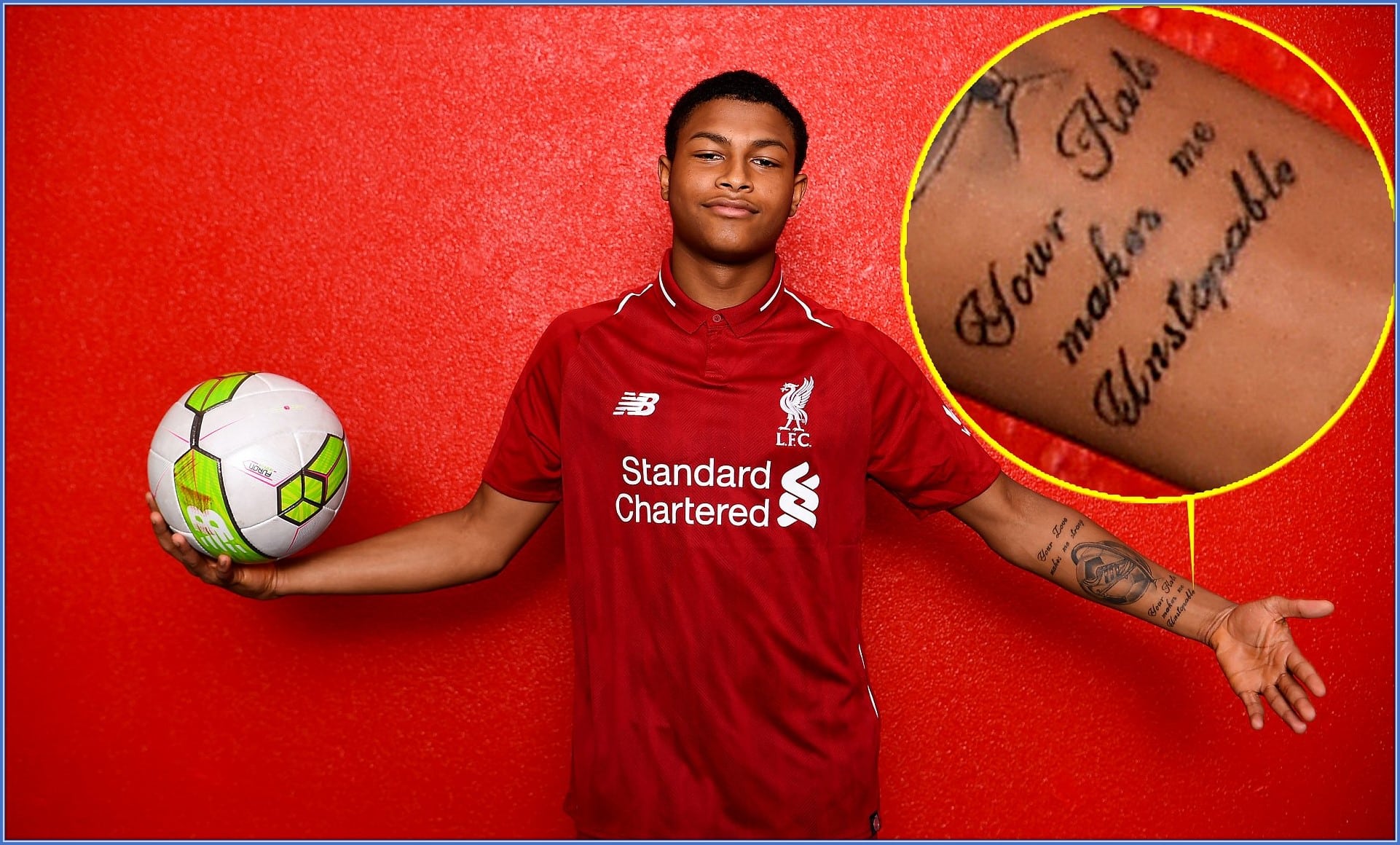 Thanks for reading this comprehensive write up on Rhian Brewster’s biography. We hope it has convinced you that the decisions made today determine the course of future events. Brewster made the shrewd decision to join Liverpool when he realized that a breakthrough with Chelsea was impractical.

More so, his decision to leave Liverpool where he doesn’t stand a chance against competing with Mo Salah, Mane and Firmino was well thought of. We must credit Rhian Brewster’s parents for supporting him in every decision that he took and goading him to success.

At lifebogger, we make Accuracy and fairness our watchword in delivering childhood stories and biography. See anything that doesn’t look right? Let us know in the comments section.