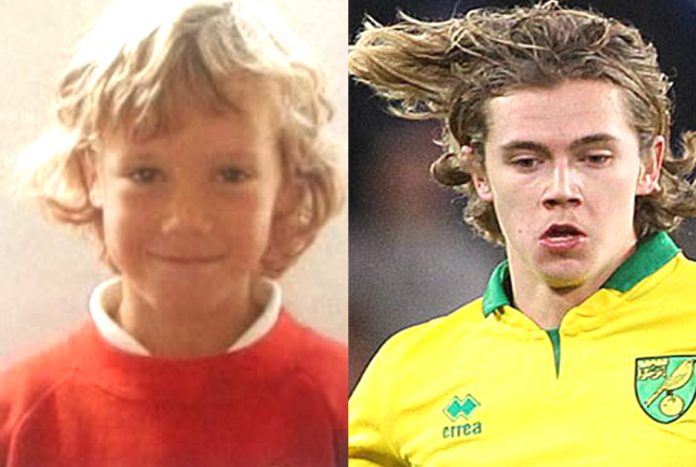 LifeBogger presents the Full Story of a Football Genius who is best known as “Cantwell”.

Our Todd Cantwell Childhood Story plus Untold Biography Facts bring to you a full account of notable events from his childhood time to date.

The analysis involves his early life, family background, personal life, family facts, lifestyle, and other little-known facts about him.

Yes, everyone knows he is an exciting prospect in the midfield. However, only a few consider Todd Cantwell’s Biography, which is quite interesting. Now, without further ado, let’s begin.

For Biography starters, Todd Owen Cantwell was born on the 27th day of February 1998 at the town of East Dereham in England.

He was born to football-loving parents that include a father identified by the name of Steve and a mother who might decide to be unveiled by Cantwell after this bio is published.

True to his looks and accent, Cantwell is a British national of white ethnicity with little-known roots.

He was raised at his birthplace in the town of East Dereham, England, alongside his brother Jordan and sister Amber.

Growing up in Dereham, Cantwell was a blue-eyed kid with blonde hair who loved watching television programs like “Tracy Beaker” and playing football with his peers.

Todd had dreams of becoming a professional footballer at a very young age and was backed with the support of his “Arsenal fanning” parents, who nurtured his aspirations over the years.

While at both education institutions, Cantwell was an active football player, especially at Northgate High, where his contributions to the school’s team success were described as “above and beyond”.

Is this Bio write-up moving too fast? of course not. Buckle up as we go way back to Cantwell’s engagement in football before he even dreamt of attending Northgate High School. Do you know that Cantwell played for Dereham Town Youth systems?

Yes, he sure did and became a wonderkid when he won all trophies on offer with Dereham Town Youth’s U8 and U9 ranks.

No thanks to Cantwell’s champ form, a new rule was introduced that made each player eligible to win just one trophy. Wasn’t he a force of balance?

Before Dereham Town Youth’s limiting rule could get hold of Cantwell, the then 10-year-old had already moved to Norwich Academy, where his anticipated meteoric rise through the ranks was not as fast as he had expected.

Notwithstanding, Cantwell got his first call for international duty with England’s U17 team when he was aged 16 in 2014.

By the year 2017, Cantwell was twice named substitute for Norwich matches but never got to make an appearance for the senior team.

The eager midfielder was a few weeks away from his 20th Birthday celebration when he eventually made an unsuccessful debut for Norwich City’s first team during an FA Cup match against Chelsea at Stamford Bridge in January 2018.

He was thereafter loaned to Dutch second-tier club Fortuna Sittard for the rest of the season.

It was at second-tier club Fortuna Sittard that Cantwell proved he wasn’t an ugly duckling by scoring twice and providing three assists in just ten appearances to help the club secure promotion to the Eredivisie at the end of the 2017-18 campaign.

Returning home to Norwich City, Cantell was handed his first start with the club during an EFL Cup match against Stevenage in August 2018.

He went on to make 24 appearances in all competitions during the 2018/2-9 season as Norwich city won the Sky Bet Championship title.

Fast forward to date Cantwell is establishing himself as a formidable midfielder in the Premier League with his latest heroic being scoring a goal against Chelsea on the 25th of August 2019.

With the Goal, Cantwell – clad in number 14 jersey – became the first Norfolk-born player to score a Premier League goal for Norwich City in over 14 years. The rest, as they say, is history.

Who is Todd Cantwell’s Girlfriend?

Roses are red, violets are blue, Cantwell could be dating, but leaves no trace of it. Thus, he can’t be categorically labeled single, neither is the midfielder known to be married at the time of writing.

Notwithstanding, we sure know that he is focused on solidifying his spot in Norwich city’s starting eleven, especially after signing a new contract that could see him remain at the club until 2022.

It might not be long before Cantwell finds himself a girlfriend or wag and possibly have  son(s) and daughter(s) from the union.

Family is important to Cantwell and everything else comes second for the defender who enjoys an amazing family life. We bring you facts about members of the Cantwell family.

Cantwell’s dad has been identified as Steve Cantwell.

The ever-supportive dad ensured that the midfielder blended football engagements with conventional education to high school level before Norwich academy took over. Steve is proud of who Cantwell has become and sometimes accompanies him to charity events.

Though little is known about Cantwell’s mom, She helped raised the midfielder and attends some of his games.

Her maternal support to Cantwell is increasing glaringly by his ability to make good references about her during his interviews.

It might not be long before Cantwell set the pace for mother-son goals by featuring photos of himself with her on social media.

Cantwell has two identifiable siblings, they include his brother Jordan and sister Amber.

Like Cantwell, Jordan loves playing football and describes himself as the third football talent in the family.

In the meantime, not much is known about Canwell’s sister, Amber. She is believed to be the only daughter of the family.

Let’s move on to Cantwell’s extended family. He has an uncle called Kevin Owen, from Fakenham while not much is known about his aunts, nieces, and nephews.

In addition, Cantwell’s paternal and maternal grandparents are yet unknown. Also, the midfielder’s cousins have not been identified in notable events of his early life to date.

Starting off, Cantwell’s personality has the makings of Pisces Zodiac traits. He has a character that includes sensitivity, creativity, and spot-on intuition. The traits sum up to give him a cool persona that endears him to friends and fans.

Digging deep into more intricate aspects of Cantwell’s personality, he hardly reveals details about his personal and private life.

Thus, not much is known of his hobbies and interests. Beyond watching movies, playing video games, traveling, and spending time with nature.

Let talk about how Cantwell makes and spends his money. He is building a solid net-worth, from the salary he receives for playing first-team football.

Other contributing constituents to his wealth take their origin from endorsements deals and private investments.

However, Cantwell lives a conservative lifestyle as he looks forward to becoming a big earner by the years.

As a result, it might take a while before fans spot him driving exotic cars. Also, owning expensive houses like veteran players.

However, he (like Josh Sargent) is big on visiting international resorts for relaxation during vacations.

How well do you Todd Cantell beyond what has been written about him in this bio? We present a few lesser-known or untold facts about the midfielder.

Cantwell is not big on religion as he hardly gives the impression of being religious during interviews or goal celebrations at the time of writing.

However, the odds are in favor of him being a Christian.

He has no body art at the time of writing and might get a tattoo considering his increasing penchant for creative expressions. Until then, Cantwell is just the way he was created.

The midfielder subconsciously plays in the league of football greats who don’t smoke and drink at the time of writing.

Reasons for treading such a healthy path is simple. To ensure that the body stays in perfect shape to handle the demands of top-flight football.

Thanks for taking out time to read Todd Cantwell’s Biography Facts. At LifeBogger, we strive for accuracy and fairness in our quest to deliver you the Biography of English Football Players. The Life stories of Ben Godfrey, James Maddison, and Michail Antonio would likely interest you.

If you find something that doesn’t look right, please share it with us by commenting below. LifeBogger will always value and respect your ideas.