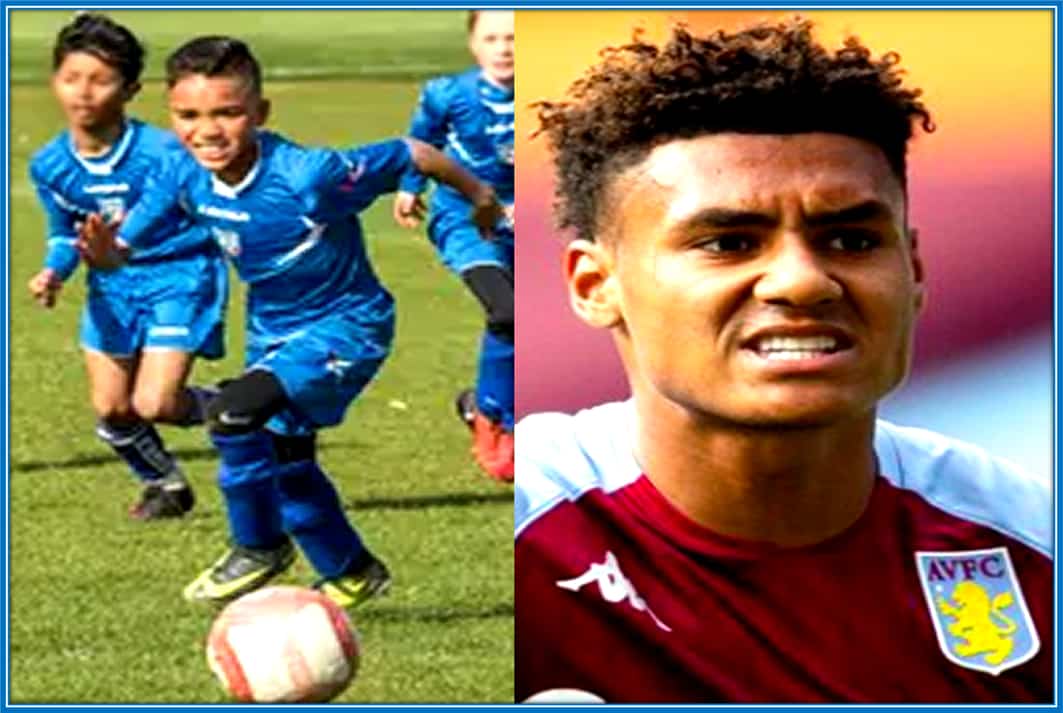 Our Biography of Ollie Watkins tells you Facts about his Childhood Story, Early Life, Parents, Family, Girlfriend/Wife to be, Cars, Net Worth, Lifestyle and Personal Life.

In simplicity, we present you the complete Life Story of Ollie Watkins- from his early days, to when he became famous. Before that, behold a brief picture summary of his Biography.

Do you know?… As of October 2020, Ollie Watkins established himself as the first person in ten years to score a hat-trick against Liverpool in the Premier League.

However, only a few people know about his Bio- probably because you hardly hear his name before the hat-trick. Now, without delay, let’s begin with the story of his youth.

Ollie was born on the 30th day of December 1995, to his parents in Torquay, England. The young lad is one among a few children born of the blessed union between his father and mother.

Although he was born in Torquay (a seaside town in Devon) Watkins spent most of his childhood days at Newton Abbot.

As a little boy, he developed a keen interest in football and soon became a full-fledged supporter of Torquay United- a small club in the English football’s fifth tier.

The bedrock of Watkins’ humble beginning is not different from that of many other English players. In a nutshell, he hails from a middle-class Family Background.

What’s more? Ollie Watkins’ parents did not panic when they realised their son’s aspiration to delve into football as a full-time career.

Even though his mum and dad knew of the commitment required to raise a football player, they still supported Watkins’ dream.

For the young lad, coming from a comfortable home translates to getting the support to live his dreams. Asides from the game, both his mum and dad believed in education.

Yes, you already know he is British, but we’ll go deeper into his roots.

There is a possibility that Ollie Watkins’ Family has its roots in Devon county. That’s probably why his household spent a long time living in Newton Abbot.

Although young Watkins was greatly inclined to play football, his parents wanted him to have a formal education.

Hence, they enrolled him to study at South Dartmoor Community College. While there, he played football and did strive to make a name for himself on the pitch.

At about that same period in 2003, the English lad took part in an under-9 trial with Exeter City Academy but ended up failing the test.

While talking with the press, Exeter’s manager, Simon Hayward, revealed why Ollie Watkins’ first trial turned out to be unsuccessful. He said;

“I remember seeing Watkins as an under-9 player, and we felt he wasn’t ready to become one of our registered academy players.

Sometimes you get the insight that certain players won’t be able to make the transition between their grass-roots club to the academy at that point in time. That’s why we didn’t think Ollie was ready for that change.”

Moving On After Academy Rejection:

Rather than forfeiting his football aspirations, Watkins became more determined to challenge his earliest disappointment.

Fortunately, he got accepted in the following season to register as an U-10 player in Exeter Academy. Thus began his football adventure.

As we all know, it takes consistency and hard work to nurture our in-born talent.

In the same vein, Watkins became so committed to his training that he gradually rose through the ranks of recognised youth players at his academy.

In no distant time, the young, talented player showcased lots of football prowess that earned him a scholarship in 2012.

Moreso, his training finally paid off as he sealed a two-year professional contract deal with Exeter in April 2014.

The earliest days of his professional career did not turn out to be all glorious.

Unluckily, Watkins only got the privilege of making three appearances for Exeter before joining Weston-super-Mare on a one-month loan at the end of 2014.

At the club, the young Englishman made an impressive performance.

Upon his return to Exeter, the prolific player failed to book his name on the team’s first eleven. However, he utilised every little opportunity he gets as a substitute to put up a good show.

Gradually, Watkins continued to make a significant impact. In 2016, he broke into the starting lineup.

Again, in no distant time, he won the EFL League Two Player of the Month award and the EFL Young Player of the Year award in 2017. See how he displays his hard-earned honour. 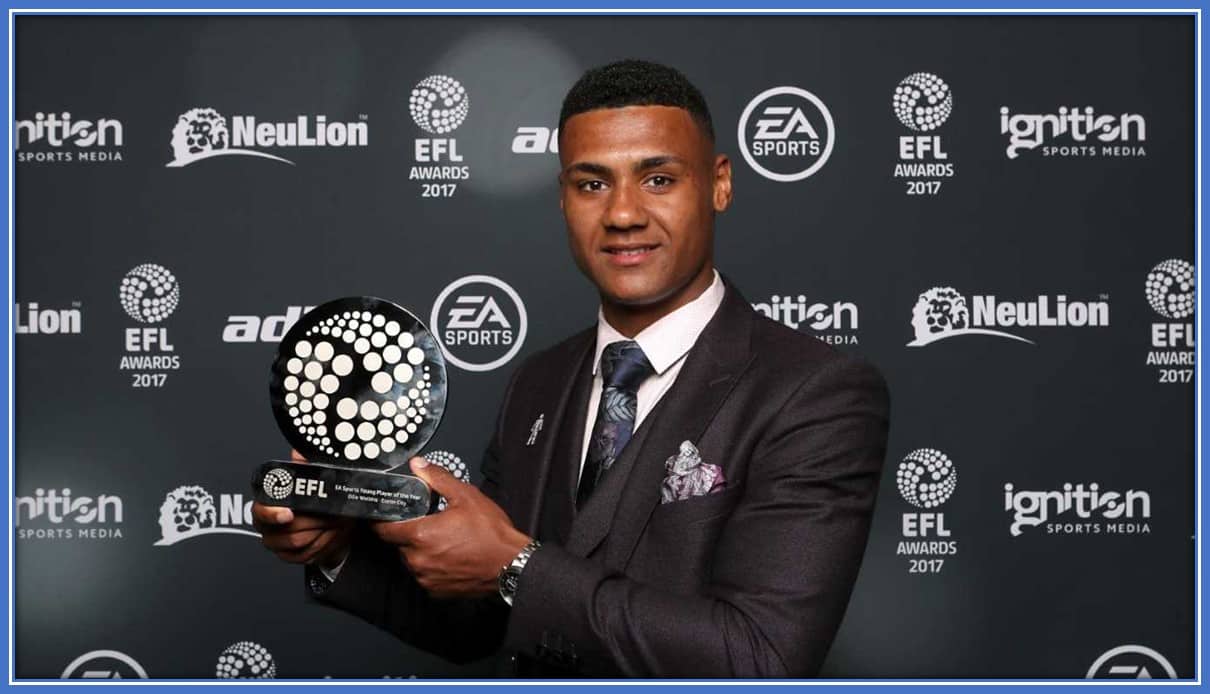 In all his 78 appearances for Exeter, Watkins scored 26 goals before moving to Brentford for a rumoured 4-year contract fee of £1.8 million.

At Brentford, he scored 49 goals in 143 appearances. Afterwards, Watkins joined Ross Barkley and Jack Grealish’s Aston Villa for a five-year contract deal worth £33 million in 2020. The rest, as they say, is history. 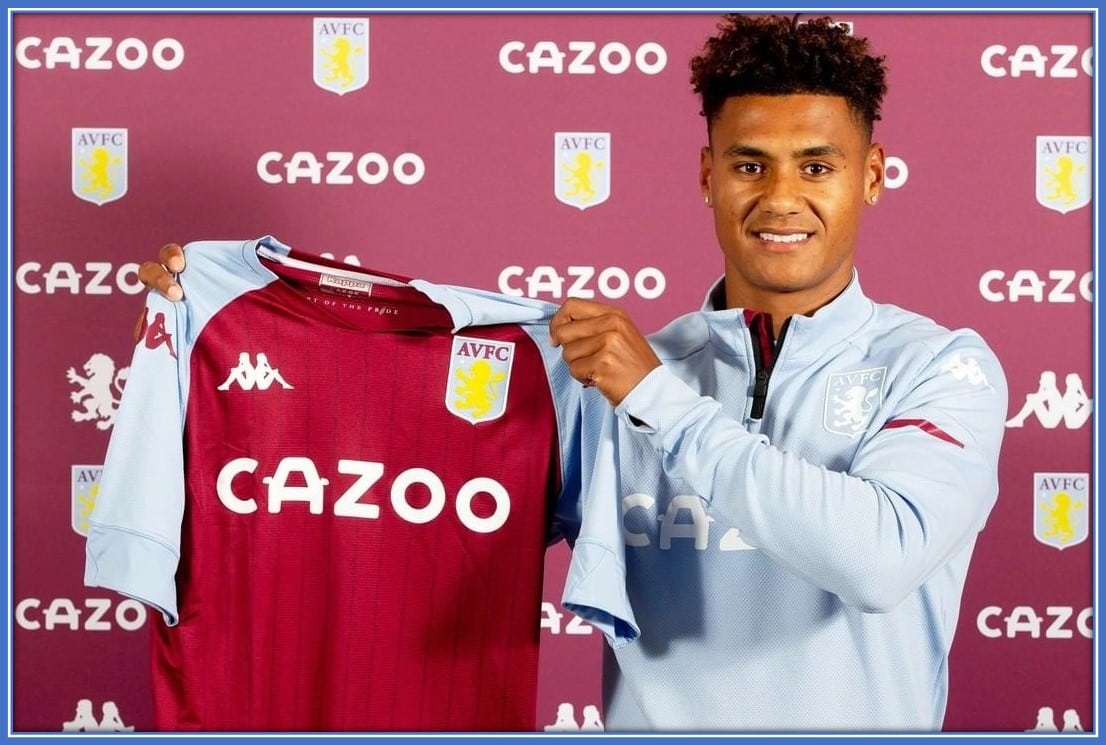 In all honesty, the prolific English player can easily boast of maintaining a healthy and perfect love life.

To tell you the truth, Watkins has a beautiful girlfriend who is known by the name, Ellie Alderson.

Interestingly, Ollie Watkins’ girlfriend is an Instagram model who supports his career endeavours. The truth is, we can never overemphasise her role in his life.

No wonder Watkins usually takes her out for his official programs as well as his private activities. Feed your eyes with this lovely photo of Ollie Watkins’ wife to be.

We can not dispute the fact that everyone is born with a unique sense of humour. That being the case, Watkins has displayed more of an extroversive and conscientious personality.

No wonder many of his teammates consider him a dependable, disciplined and focused player.

Unlike Ngolo Kante, the Aston Villa centre forward is friendly, chatty, and draws energy from crowds.

No wonder he finds it interesting in spending some time with little kids and honouring talk show invitations. 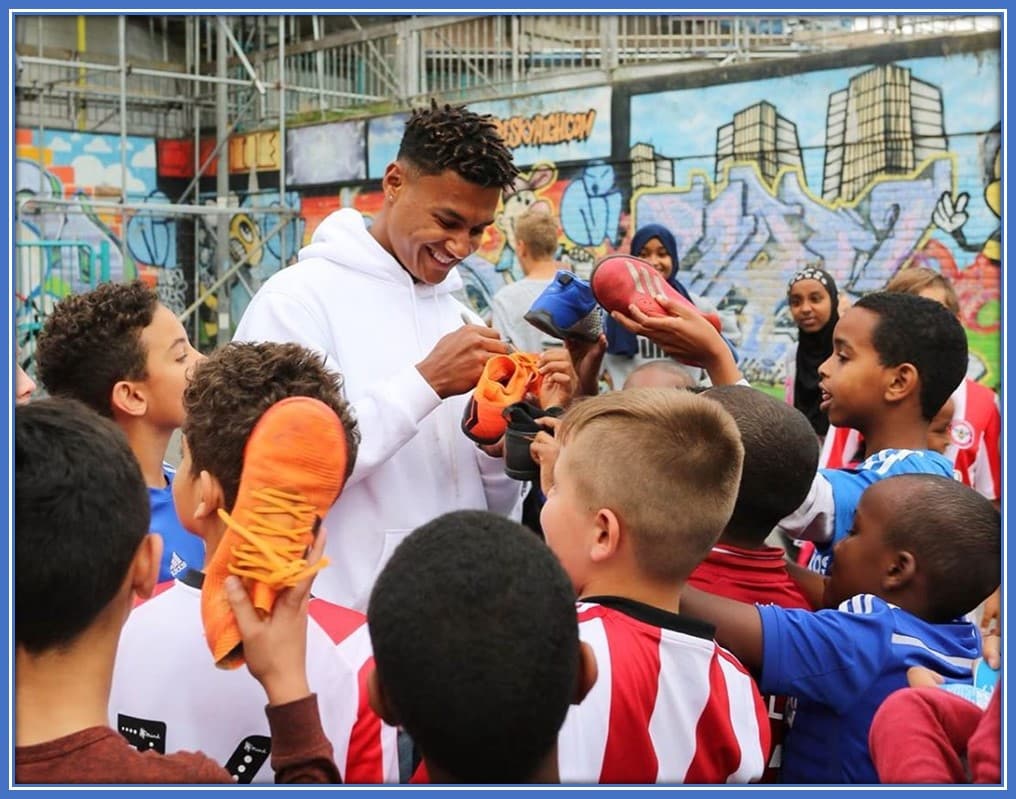 There is no EPL player who doesn’t earn a decent amount of money in the 21st century.

Similarly, Watkins has made enough cash that can afford himself a luxurious Lifestyle. Hence, he is not too bothered by any sort of financial crisis in his life.

Even though he has tried to be more secretive about his assets, Watkins has once driven an expensive Mercedes Benz (his favourite car) to the training ground.

Moreso, he also owns a beautiful house that has a world-class swimming pool. Take a look at the display of Watkins’ assets below. 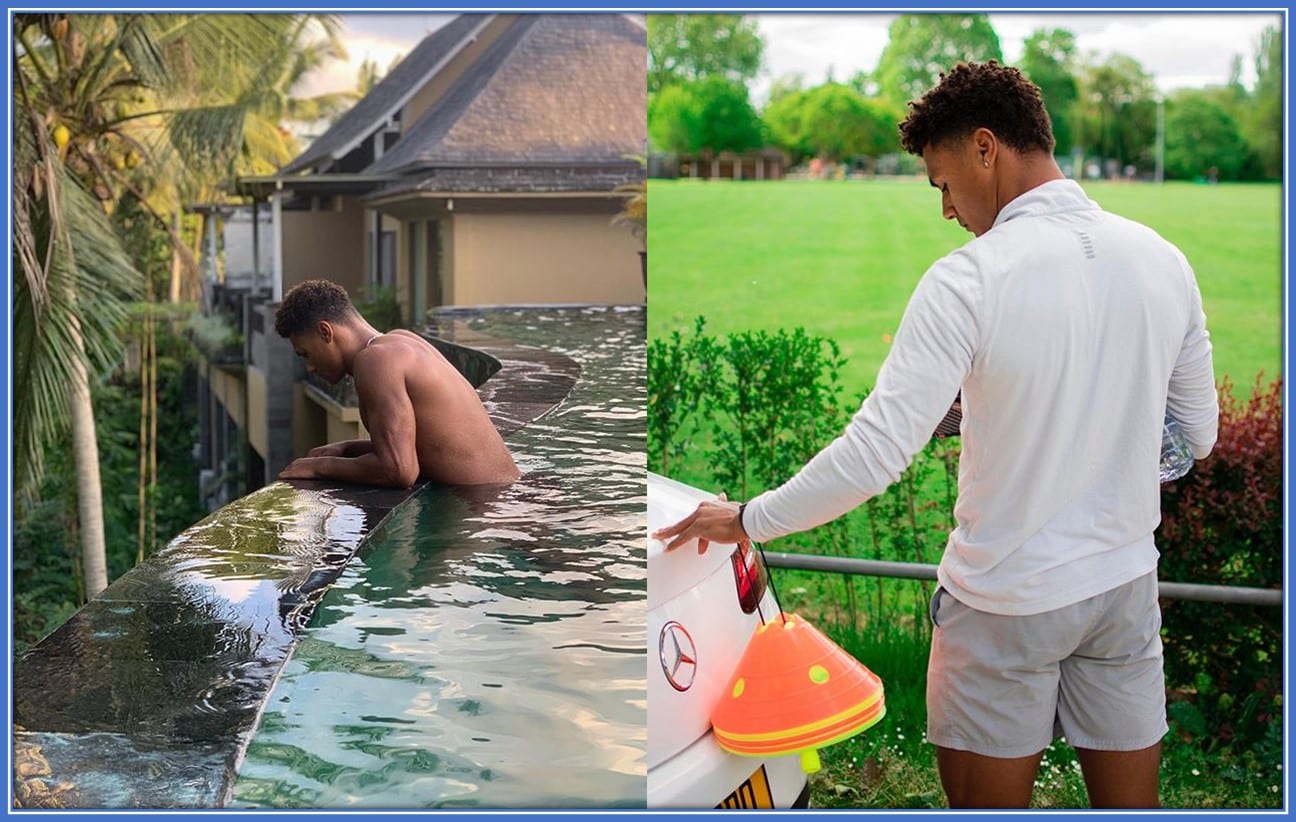 Following his move to Aston Villa, the iconic player recorded an increase in his financial proceedings.

In fact, Watkins’ new club placed him on a payroll that generates an annual salary of £3.9 million. Wow! That makes his earnings about six times greater than his yearly revenue at Brentford.

The Biography of Watkins would be incomplete without worthy mentions of his household. Hence, we present you with the information about his Family starting with his mother.

It goes without saying that the revered goal scorer has enjoyed a lot of support and love from his mom.

However, many of his fans find it odd that he has not mentioned his mother’s name in an interview since his Rise to Fame.

We all hope he gets to satisfy everyone’s curiosity concerning his mom’s identity soon.

The entire world of football owes the prolific player’s dad an appreciation for raising him so well.

It would be wrong of us to remember Watkins’ career success and forget about the one person who has helped him pursue his ambition.

There are only a few fathers that would continue to assist their children when their first trial in sports fails. And Watkin’s dad is one of them.

In the course of research, we’ve been able to access the fact that Watkins is not the only child of his parents.

Truth be told, the number of Watkins brothers and sisters remains a mystery to his fans. However, seeing that he shared a picture (shown below) of himself and his niece gives valid proof that he has other siblings. 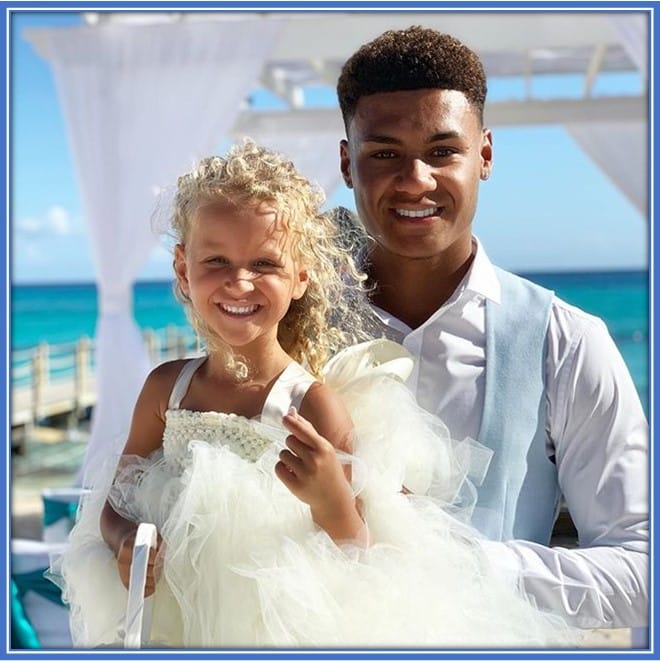 We can not help but wonder why the Aston Villa player doesn’t talk about his family. Could it be that his grandfather and grandmother are already dead?

Or is there a different reason that compels him to be silent about his ancestry? Whichever the case may be, we hope he gets to quell our curiosity soon.

To wrap up our Ollie Watkins Life Story, here are a few facts that would help you get a complete grasp of his Biography.

We’ve strategically put up an analysis of Ollie Watkins’ salary as the clock ticks. Find out for yourself how much he has earned since you came here.

This is what Ollie Watkins has earned since you began viewing this Bio.

Unlike many young footballers who idolises C. Ronaldo and Lionel Messi, Watkins disclosed that Thierry Henry has always been his role model. Here is what he told the media while talking about his football idol;

“I always try to base my game on Thierry Henry’s playing style. That is why I drive at defenders and look to make something happen when I get the ball.”

Over the past few years, many players have displayed a keen interest in getting a dog as their pet. Similarly, Watkins has also taken a liking to snap with his cute little dog, which you may likely find adorable.

We may not really understand why football players prefer to have dogs at their homes, but we are quite confident that they seem happy with their pets. 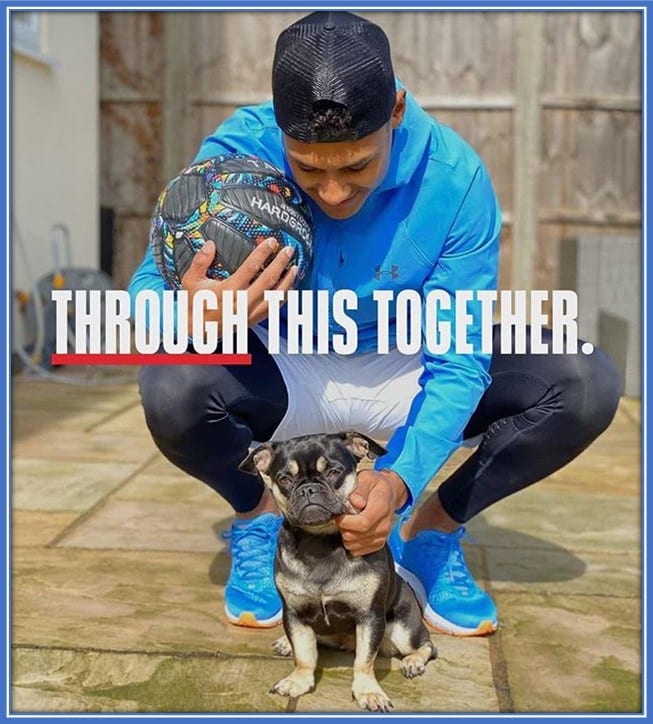 Judging by his full name, Ollie Watkins was born into a Christian home.

However, he prefers to keep the fact about his current belief private. No wonder he rarely talks about his religious point of view on the media.

With the level of impact that Watkins is making at Aston Villa, he deserves more potential ranking than what Fifa gave him.

Anyway, let’s hope that he continues to wow his fans with his football prowess in the Premier League.

The Life Story of Ollie Watkins has shown us that people would try to discourage you of your career decisions.

However, it takes courage and perseverance to hold on to your dreams and overcome people’s negative affirmations.

Remember, success would always attract people. Hence, try to work towards excellence in all your endeavours and watch how your parents, relatives, friends and strangers will celebrate you.

Thank you for reading our Ollie Watkins Life Story and Biography facts. Just know that we are always here to provide you with quality content.

Notwithstanding, if you find anything that doesn’t seem right with our article, kindly contact us.