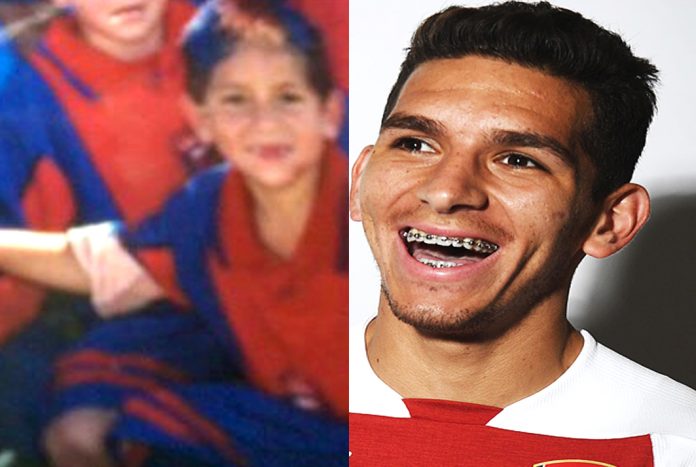 LifeBogger presents the Full Story of a Football Genius best known by the nickname “Little Leader“.

Our Lucas Torreira Childhood Story plus Untold Biography Facts bring you a complete account of notable events from his childhood.

Yes, everyone knows about his smallish looks and powerful zeal. However, only a few consider Lucas Torreira’s Biography, which is quite interesting. Now without further ado, let’s Begin.

For Biography starters, his full name is Lucas Sebastián Torreira Di Pascua. Lucas Torreira was born on the 11th day of February 1996 to his mother, Viviana Di Pascua, and father, Ricardo Torreira, in Fray Bentos, Uruguay.

Lucas grew up in a large middle-class home whose happiness and contentment were not in any way held hostage by their middle-class family background.

Asides from his parents and relatives, Lucas grew up with his sisters Ana and Pitu Torreira and brothers namely; Brahian and Bebo Torreira.

In his tiny Uruguayan town of Fray Bentos on a summer evening, you can cycle through tranquil beaches, especially at sunsets.

Right from his childhood till date, Lucas had always loved to experience the yellow fading sunset alone with his mum, who is a housekeeper.

Lucas and his dad also enjoy a good relationship. He likes to spend good quality time with his dad who is a rich meat butcher in the sleepy, charming riverside area of Fray Bentos.

Most recently, in 2017, the Torreira family became well known in the Fray Bentos meat business for corn beef production and export.

This happened when Lucas bought one of the biggest butcher shops for his family. He named it ‘La 34’ after his shirt number at Sampdoria, his Italian club.

Did You Know?… Fray Bentos is a world supplier of corned beef. Also, Meat from Fray Bentos fed both British and American troops in world wars I and II.

Among his brothers, Lucas was more eccentric and energetic and excelled majorly in sports. Early on, he got attached to playing football, which he believed would uplift himself and his family.

In order to start his professional journey, Lucas decided to enrol for his local team, 18 de Julio which gave him the opportunity to showcase his talents.

Just as many young footballers in Fray Bentos dreamt big, Lucas, pictured below, had the desire to play for a bigger club in Uruguay’s capital, Montevideo.

As a way of showing his obsession, he applied for several trials, and one went successfully with an invitation to Uruguay’s capital Montevideo.

Lucas’ quest to visit the Uruguayan capital city for the first time didn’t go as he had planned. Back in Fray Bentos, scary words once came through that Lucas was in trouble.

Barely a teenager, a brave nine-year-old left his hometown for the bustling city of Montevideo to attend trials with the youth team of Peñarol in pursuit of a professional contract. For Lucas;

It was a big club, a big city and a big opportunity.

While reaching Montevideo, Little Lucas was a long way from home and a long way from getting help. According to his plans, he was supposed to be lodged in the capital before and after his trials.

Unfortunately, Lucas received the news that his accommodation could no longer be provided. At that point, he had nowhere to go and no money to make his miserable 200-mile journey back home.

When the news of his situation reached Atlética 18 de Julio, his boyhood club, there was no hesitation.

Lucas decided to keep a mixture of gratitude and emotion to his boyhood club. This happened after he was being accepted back like a prodigal son after his failed move.

That old gratitude is permanently fixed today as a tattoo on the back of his right leg. The tattoo of 18 de Julio’s crest is visible whenever Lucas keeps his socks a bit rolled down. 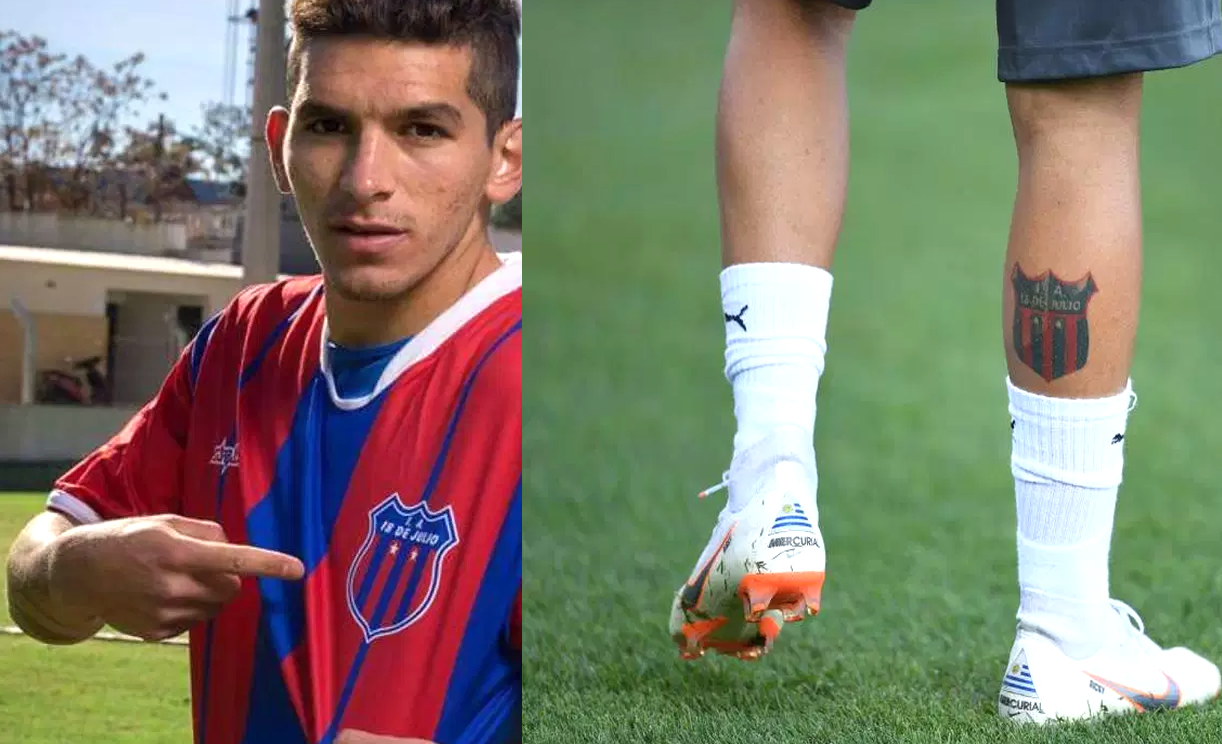 The 18 de Julio tattoo no doubt serves as a reminder of where he came from and what he went through in those early days.

As a way of saying thank you to 18 de Julio, Lucas Torreira decided to spend the whole of his childhood career there.

During those periods, he hardened his mental faculty, Lucas would most times play with the club’s men’s football.

This helped him develop the grit and toughness – or garra, to give it its Uruguayan name – that he plays with today.

In the year 2013, at the age of 17, Lucas decided to move to his much anticipated Uruguay capital to seek European opportunities. 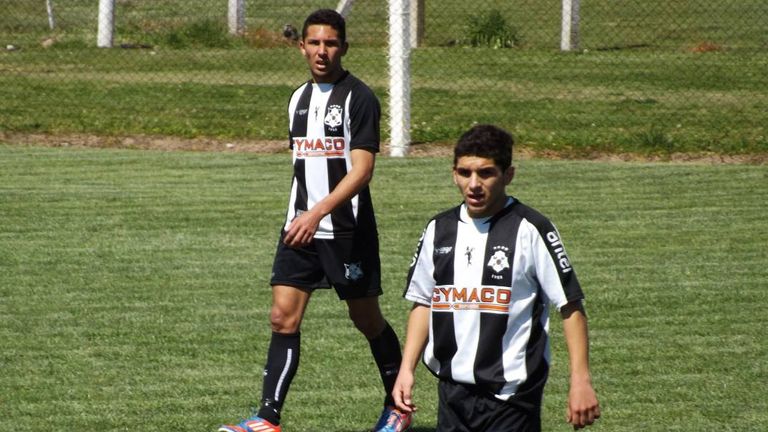 After a successful trial, Lucas joined Montevideo Wanderers’ youth team, which gave him his much-anticipated ticket to Europe.

Being picked for trials came after he had impressed Italian scouts from Pescara. “Torreira’s move to Italy is a curious story,” Marcelo Piriz, his former youth coach once told Sky Sports. In his words;…

“I still talk about it with him now, because the truth is that he was initially not selected to attend trials in Italy.

There were five boys from different age groups on the list to go for trials, but Lucas wasn’t one of them, yet he was better than all of them.

This fact made me react to his situation. I had a conversation with our sporting coordinator and I asked why Lucas wasn’t going. He said that he was too small – that in Italy they had big players.

I told him that Lucas would be fine and that changed his mind. In the end, Lucas went and he was the only one who passed the trial and stayed in Europe”.

Before the Italian 2014/2015 football season, Torreira got himself promoted to Pescara’s first team.

Did You Know?…  He was so good that only after five matches, clubs in the Italian top-flight (Serie A) started looking for him.

Despite successful negotiations with Sampdoria, Lucas decided to remain at Pescara in order to gain the first-team experience, which he fought tooth and nail to achieve. 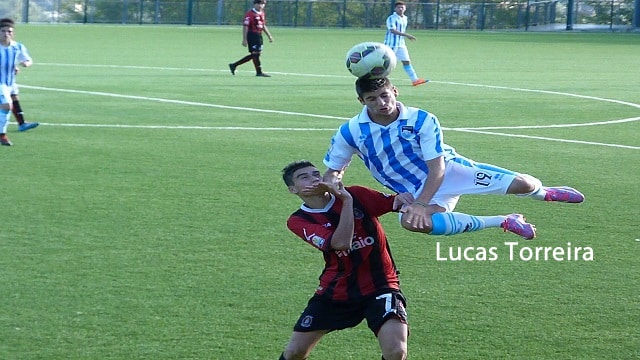 Upon reaching that climax with the club, he decided to make his glorious move to the Serie A club Sampdoria.

It was Lucas Torreira’s performance at Sampdoria that gave him his Uruguayan ticket to the Russia 2018 FIFA World Cup. 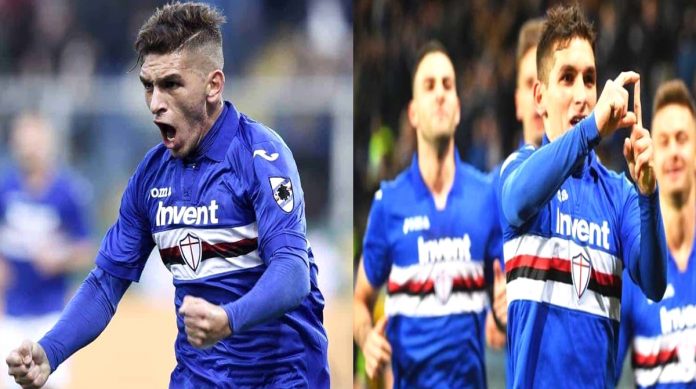 Before Uruguay’s second World Cup match, Lucas was still considered the second fiddle to other Uruguayan senior players. He didn’t even start for Uruguay against Egypt and Saudi Arabia.

Lucas, however, saw himself in the starting eleven against the likes of Russia, then Portugal, and France.

As Lucas started proving himself at the tournament, all Uruguayan fans, both home and abroad, started backing him for every hustle and tussle he made, especially with much bigger and stronger players. 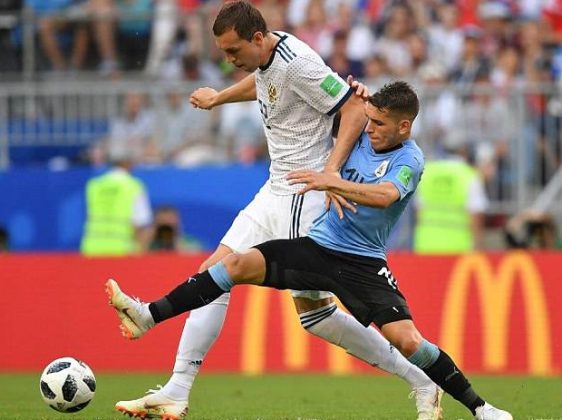 It took no time for Lucas to get the much-needed fame he deserved in the world cup tournament.

This happened in his match against Portugal when he floored Cristiano Ronaldo in the tournament. Watch a short clip of the action.

Unfortunately, his Uruguayan team crashed out of the tournament after reaching the Quater Finals.

Following his superb performance at the Russia 2018 FIFA World Cup tournament, Lucas Torreira received a hero’s welcome upon returning to his hometown of Fray Bentos, Uruguay. 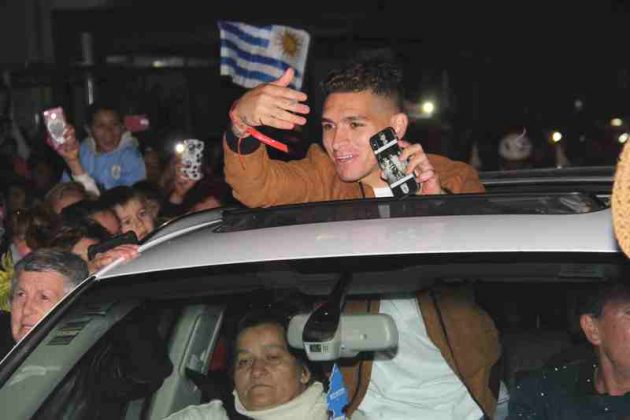 Once words got out that “Luquita” or “Little leader” had returned to his hometown Fray Bentos, fans began to fill the streets in a bid to get a glimpse of him, who was evidently humbled and seen like a “Little god“.

As seen in the photo, Lucas Torreira was driven by his father with his tired mum also in the front seat. 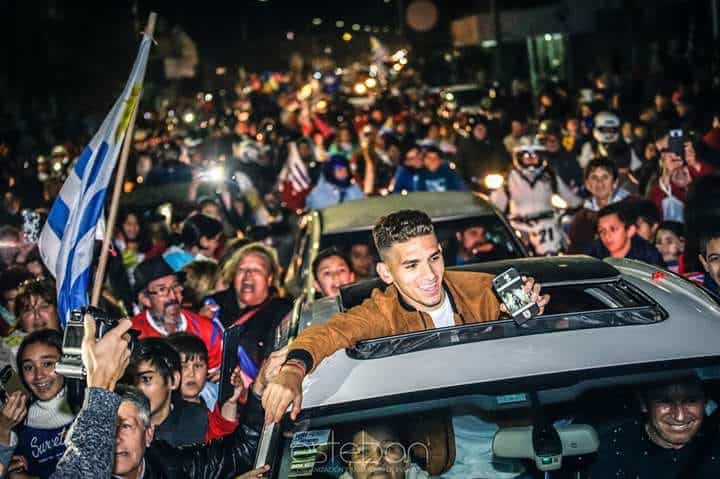 Did You Know?…  Even a 90-year-old grandmother waited at the door of Lucas Torreira’s childhood team, 18 de Julio, to kiss the star who was known to later pay homage to his old club.

Another young mother and her son had to travel more than 65 kilometres by motorcycle just to see Lucas Torreira’s face. Upon being appreciated by his people, Lucas once said;

“When you are a child and you dream of these things, everything seems very far away.

It’s amazing, to get to Uruguay.

to see the affection of all these guys. It’s something magnificent.

something that I have earned through a lot of sacrifice.

I want to share happiness with all of them because they saw me grow up, they know how difficult everything was for me.”

After a summer of speculation, Arsenal decided to go for the combative midfielder whom they’ve craved for years since after Gilberto Silva and, most recently, Sergio Busquets. 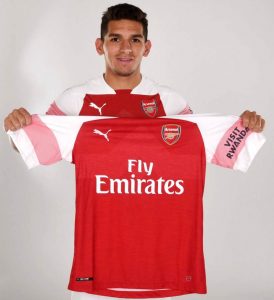 Lucas Torreira joined the English club Arsenal on 10 July 2018 for an undisclosed fee, believed to be around £26.4m.

Did You Know?… Arsenal paid Sampdoria a total of £26.4m — £4.4m more than his release clause — in order to guarantee his signature. His Sampdoria coach Marco Giampaolo at that time, made a funny statement saying;

“If Torreira were 1.8 metres tall, he would already cost €100m and would be considered among the strongest  defensive midfielder in the world,”

And behind almost every successful Uruguian Footballer, there’s a glamorous wag as seen in the person of Vittoria Repetto (pictured with the love of her life below).

Repetto met Torreira when he had just got from Italy from Uruguay, a time he enjoyed spells at Pescara and Sampdoria.

Beautiful Repetto is someone who would, at some point in time, decide not to do makeup in a bid to keep to her natural beauty. 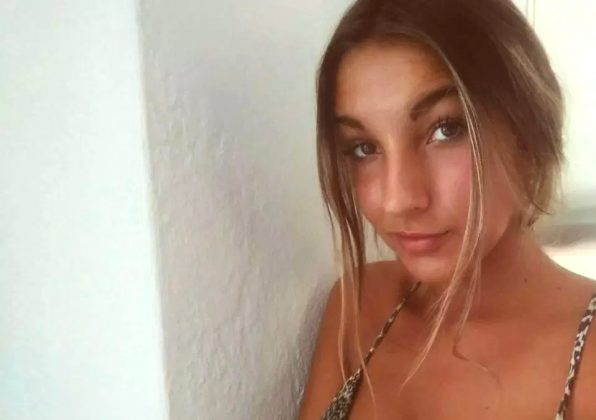 Repetto as at the time of writing is a psychology student. She currently flies back and forth between England and Italy to take care of her boyfriend and university demands.

Settling into life in North London with her boyfriend, beautiful takes her time to review modelling contracts. She is a model with a curvy body, one who is certainly not shy in front of the camera. 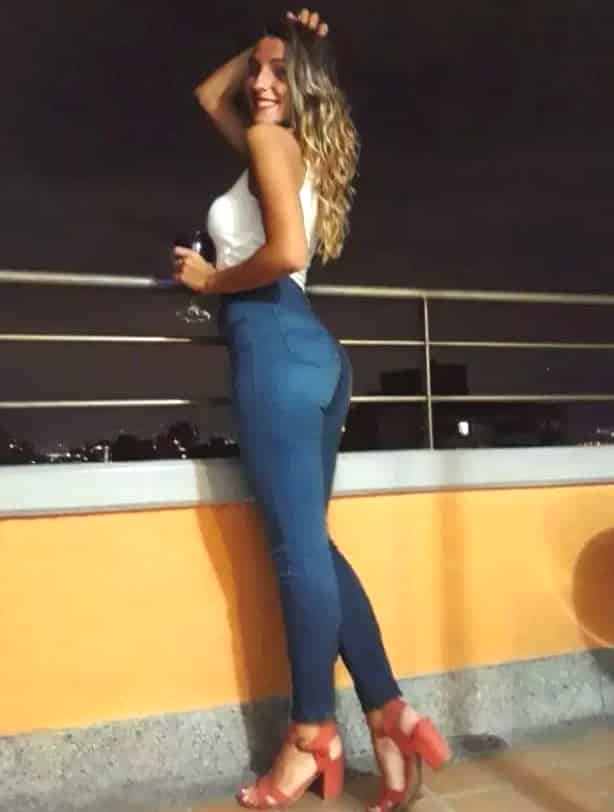 Did You Know?… One thing Repetto loves doing is showing off her endless holiday photos with her man. On social media networks, these lovers show off emotional images of them having fun at beach sides. 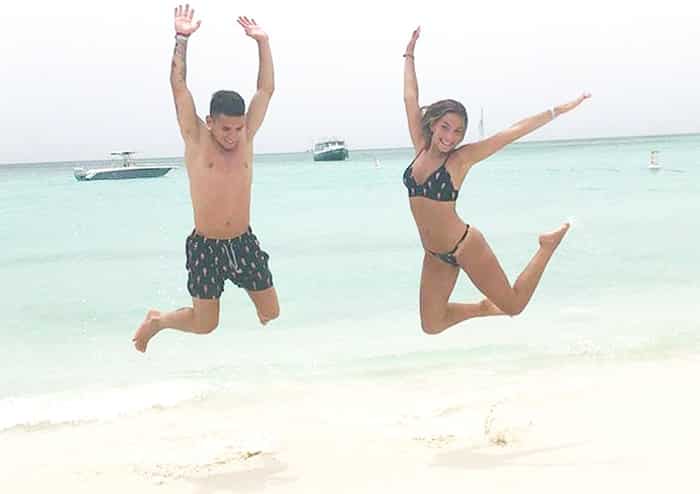 The loved-up couple also enjoys nothing more than posing for selfies in beautiful locations. 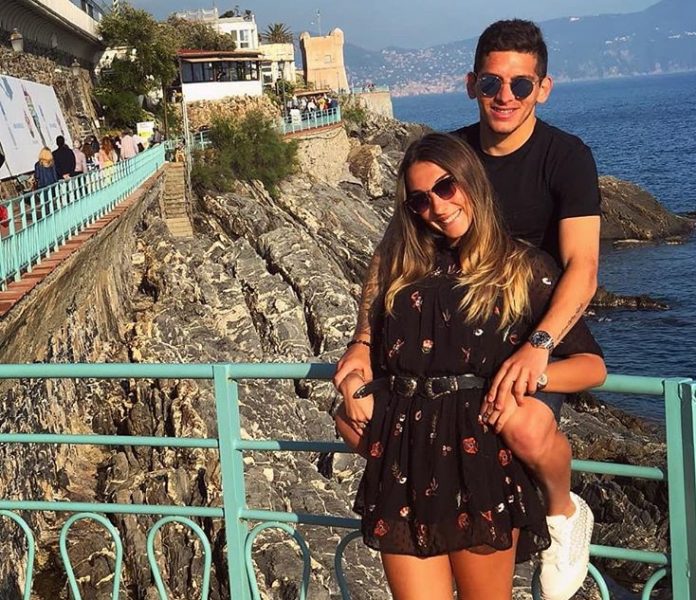 Surprisingly, they’ve once been spotted enjoying corn on the cob together on the beach during a summer break. 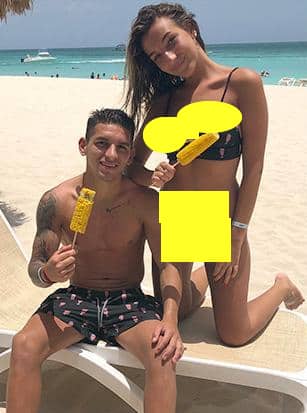 Lucas Torreira is seen as someone who values his humble beginnings more than anything in life.

The Baller appreciates his early days when a Vespa Motorcycle was all the Torreira family had. This is seen in the photo below. 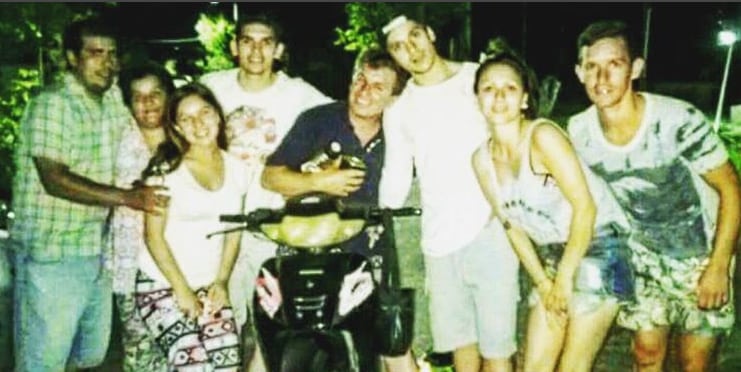 Today, Lucas is seen as a progressive, original and independent person.

He keeps in touch with family and close friends including teammates Hector Bellerin and Nacho Monreal. Lucas dislikes lonely, dull or boring situations. 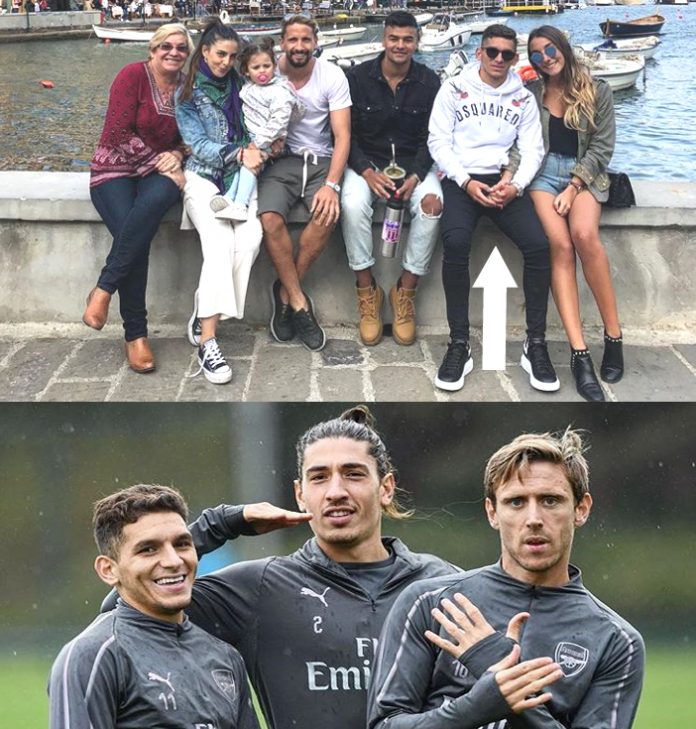 That one thing Lucas doesn’t mess around with is enjoying boat rides along with Repetto or with family members/friends. 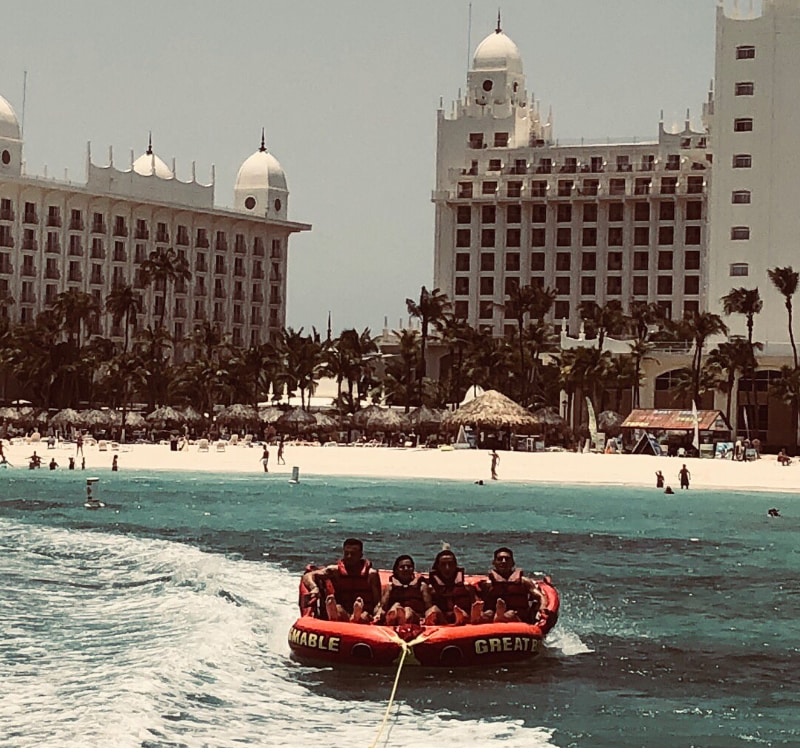 Thanks for reading our Lucas Torreira Childhood Story plus Untold Biography Facts.

LifeBogger strives for accuracy and fairness in our quest to deliver you Uruguayan Football Stories. The Life History of Rodrigo Bentancur and Darwin Nunez will interest you.