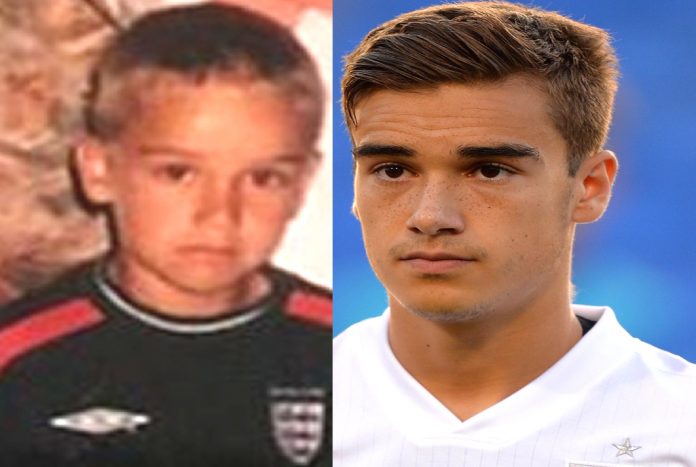 LB presents the Full Story of a Football Genius who is best known by the nickname “Little Iniesta“. Our Harry Winks Childhood Story plus Untold Biography Facts bring to you a full account of notable events from his childhood time to date. The analysis involves his early life, family background, life story before fame, rise to fame story, relationship and personal life.

Yes, everyone knows about his handsome looks, small frame and style of play. However, only a few consider Harry Winks’ Biography which is quite interesting. Now without further ado, let’s Begin.

Starting off, his full name is Harry Billy Winks. Harry Winks as he is know was born on the 2nd day of February 1996 to his mother, Anita Winks and father, Gary Winks in Hemel Hempstead, United Kingdom.

Harry was born to a football loving family. His father Gary was a former semi-professional footballer who played for Hemel and Berkhamsted. The Winks family had been a life-long Spurs supporter early on since 1984 after Spurs UEFA cup win.

Speaking of family history or origin, Harry Winks comes from a family of Spanish descent through his mother and grandparents. He is however proud of being a British through his dad. Harry grew up with his little sister named Milli whom he is very protective of. 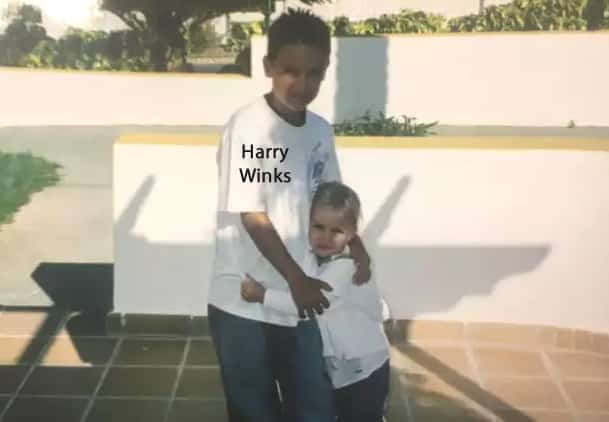 Whether at home or bonding with his cousins, Harry pictured below would always look out for his sweet little sister. 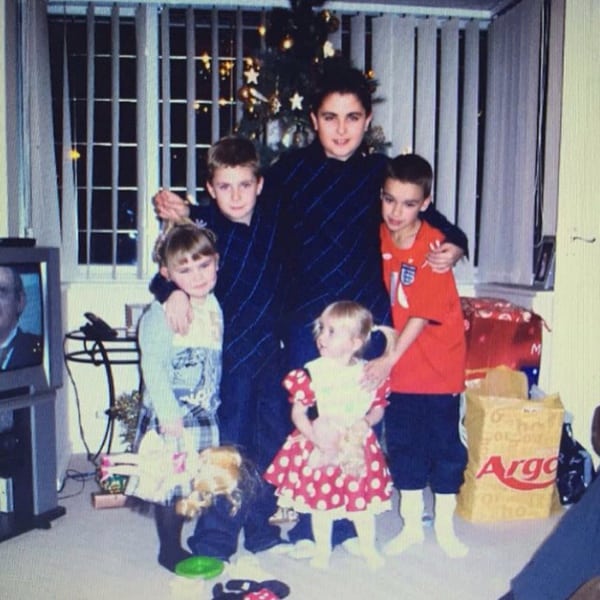 Today, it’s pretty cool and very proud for Milli to see her big brother, closest person and former partner in crime receiving so much footballing success. 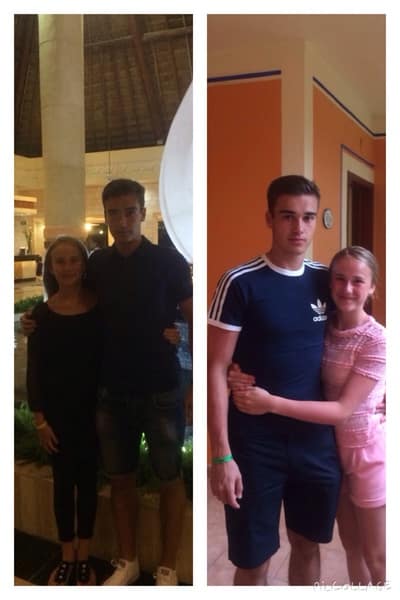 Presently as at the time of writing, nobody in the world has a strong bond that that shared between Harry, Milli and their mum Anita. 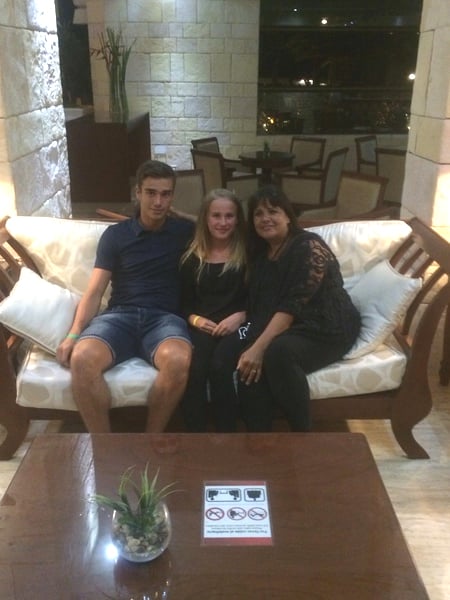 Speaking of being a Spurs fan, Harry’s dad Gary once said:

Of course Harry is a Spurs fan, that was forced on him by me!

Harry just like his mum and dad had been a Tottenham Hotspur fan even before he started playing football. Harry attended his memorable first match at White Hart Lane when he was six years old. Seeing the likes of Michael Carrick, Robbie Keane and Teddy Sheringham motivated him to start kicking anything which looked like a soccer ball.

Speaking about her son’s football experience as a child, Harry Wink’s mum Anita once told the Gazette:

“Even as a small child Harry would play with a rolled-up sock. He’d be dribbling it everywhere all the time. Then he moved onto a tennis ball. He’d always be kicking it all around the house, driving me mad!”

If it is not kicking a soccer ball around or inside his family home, Harry would be seen posing around near by posters of David Beckham and Michael Owen. 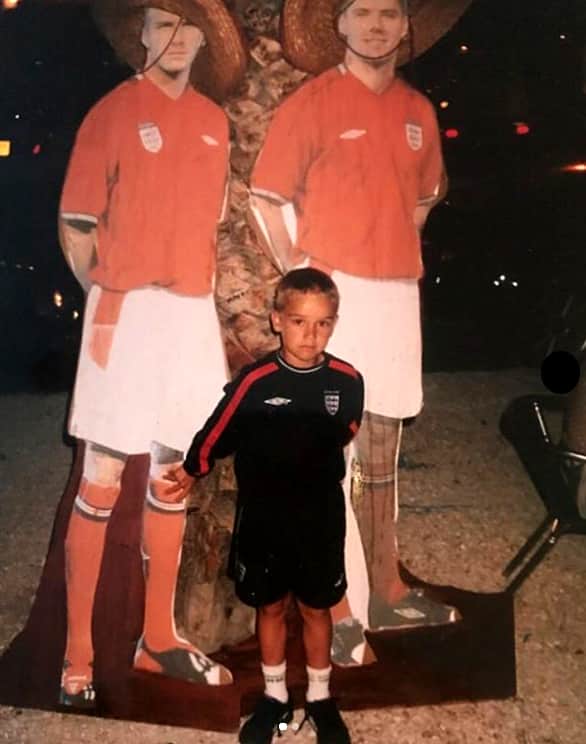 Despite Harry’s love for Spurs, he decided to glue himself with the England shirts and shorts. Looking at his photos above, you’ll observed it were his favorite jersey items. 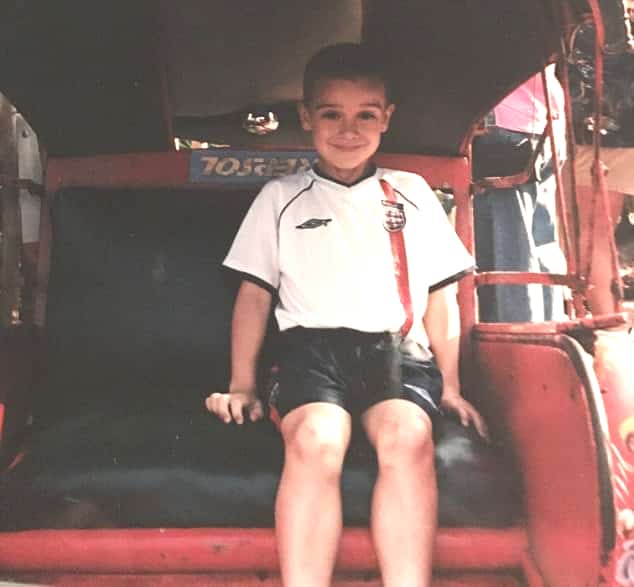 Little did Harry knew he was going to wear it someday. As at the time of writing, the England national Jersey suits a very handsome him. 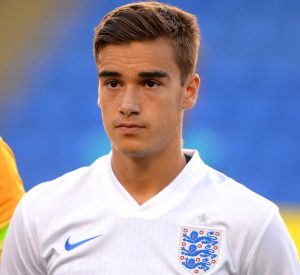 Harry’s potential was first spotted at the age of 5 when his parents enrolled him at the roster of Ross & Andy’s Soccer Camps. He further went on to play with Echoes FC in Hemel Hempstead where his natural talents became well known. 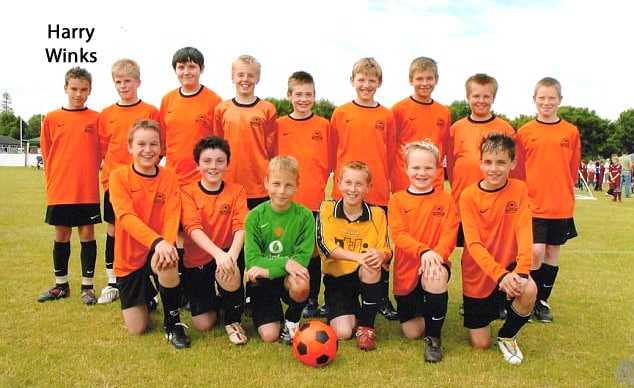 Harry was known as someone with a good energy and despite his slender frame, he would still get about the pitch with good stamina. Early on, Harry had his early soccer education with the prestigious Cavendish School where he graduated at the age of 11.

Thanks to his ability to handle the ball as a kid, Harry was recommended by his tutor at Ross & Andy’s Soccer Camps to attend Tottenham Hotspurs trials. He passed and enrolled at the club. Even at Tottenham academy, many clubs still courted him as a youngster.

Harry’s parents Anita and Gary were keen to stress the many sacrifices that Harry has made during his early days at Tottenham. First, as a young teenager, Winks suffered from growing injuries and back troubles. Despite that, the academy chief McDermott had faith in the little boy just as he did with late-developers, such as Kane and Andros Townsend. Even Teddy Sheringham took a close interest in young Winks and Scott Parker emerged as a mentor. 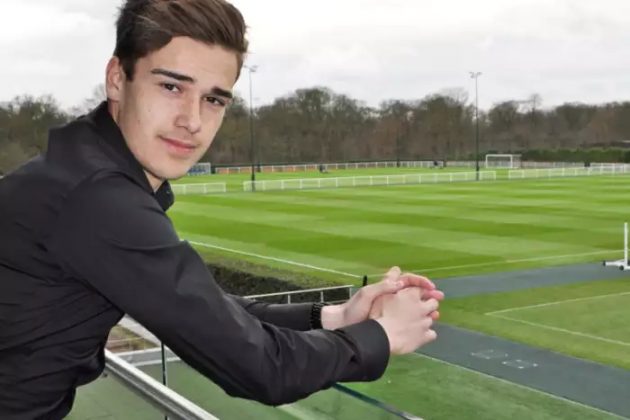 in order to dedicate his life to his dreams, Harry decided to move out of the family home at age 16 to live close to the Spurs training ground. The decision wasn’t an easy one for the Winks family. According to his mum Anita;

Harry had to change, mentally. He was very homely, and moving out at that age was very hard. All three of us – me, Gary, and Milli stood and cried as he shut the front door in front of us.

Harry’s parents would only see him one evening a week. According to Harry, moving from the family home to live with people he had never met was probably the hardest thing he had done in his whole life. Harry went on to lived in Southgate, a suburban area of north London. He stayed with a nice married couple named Lesley and Matt whose home was close to Spurs youth training ground. Luckily, Matt who was a driving instructor taught Harry how to drive.

Harry’s determination to become a professional didn’t go as a passing fantasy. On 27 July 2014, he signed his first professional contract with Tottenham after impressing Mauricio Pochettino who severally watched videos of his performances. 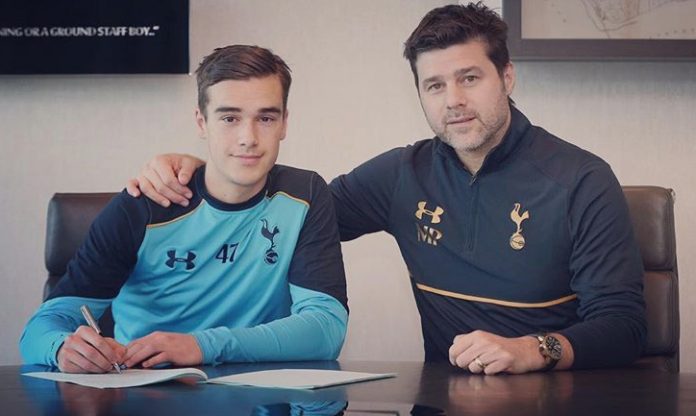 Pochettino saw Harry as a player similar to his Spanish brothers Xavi and Iniesta. He also looked at him as being completely different from his midfielders namely; Victor Wanyama, Eric Dier, Mousa Dembélé and Moussa Sissoko. Harry’s first league goal celebration showed how he and Mauricio Pochettino had developed a strong bond since their first encounter.

Shockingly, Harry got called up for England despite making only four starts in the league for Spurs. Gareth Southgate picked him thanks to his passing record. 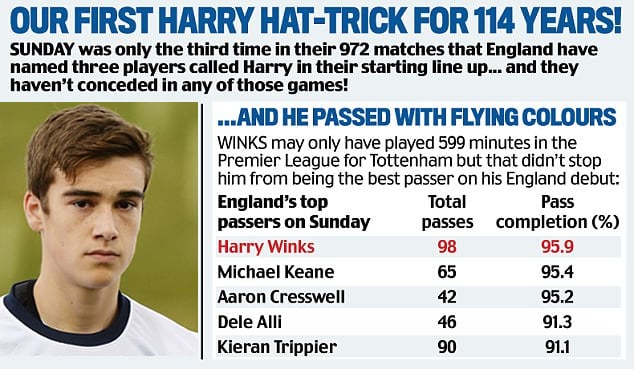 Did You Know?…  In every teen movie, the girl would most times fall for the popular footballer. At some point in that girl’s life, deep down, there is always a wish to date a star player. Unfortunately, Movies hardly show us the downside of dating the football player. This is one sole reason why Harry has been single during the early years of his senior career.

Harry’s first relationship story came at the age of 22 (July 2018) when he was spotted with British reality show lady, Rosie Williams who is 4 years his senior. The pair was once spotted leaving a 5-star hotel, London’s Shangri-La hotel. 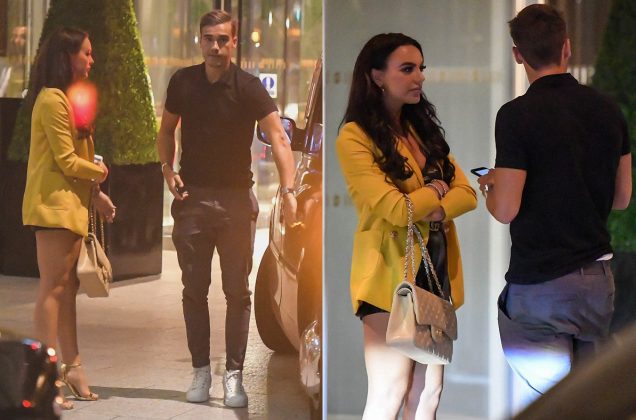 In the photo, Harry appeared to be the perfect gentleman for Rosie as he held the door open for her. This was a time Rosie just got dumped out of the British Love Island reality show. Stepping out in a stylish yellow blazer, the Welsh lady had to put on a very leggy display for the man she admires. Only time will tell if Harry will take her as a girlfriend or a wife. 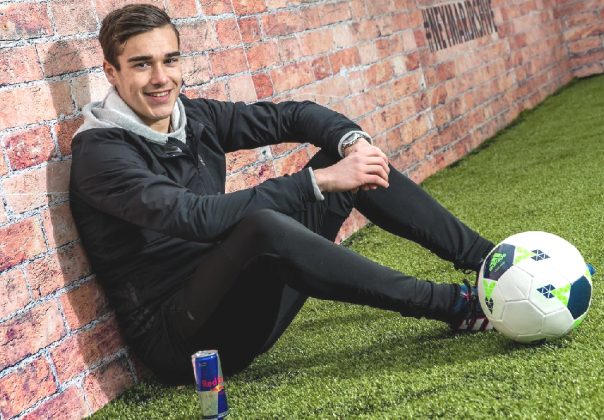 Harry was born shy and quiet, but on the other hand, he can be eccentric and energetic. As observed from his youthful days, It is someone who could easily adapt to a change of environment or any new energy that surrounds him.

Did You Know?… Unlike some footballers, Harry Winks doesn’t get so much closer with fans. This was because he was once paid evil for doing good. Now let me tell you what really happened!

Harry was once spotted in a club in Watford by a fan, who seriously begged the midfielder for a photo with Winks not knowing the ulterior motive. Shockingly, that same fan named Nikhil Shah posted the photo on his social media page exposing Winks on going clubbing despite nursing an injury.

The fan also went as far as attempting to get in contact with The Sun to discuss a sale of the photo which probably went through. Below is a snapshot of what the simple looking but evil-minded Nikhil Shah wrote after uploading the photo on his Instagram account. 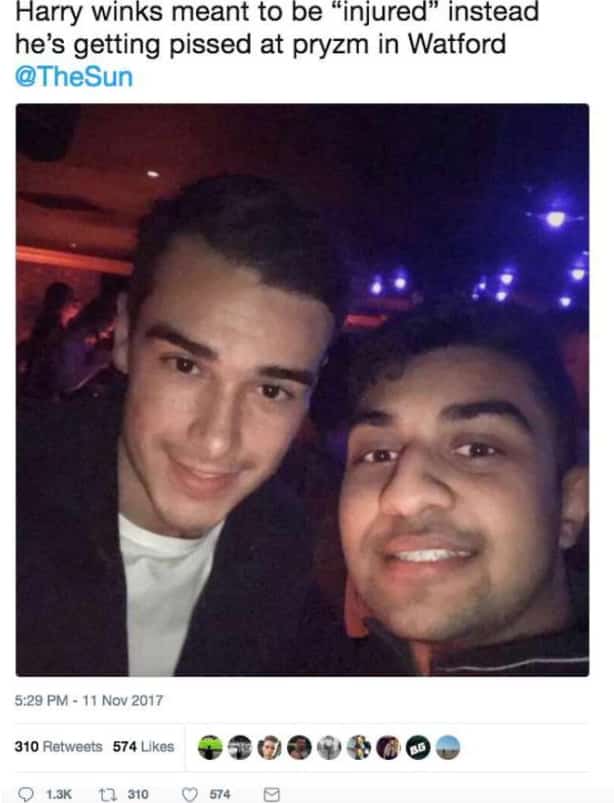 This explains the reason why Winks doesn’t get so much entangled with fans especially in the wrong places. Despite all the effort to gain cheap popularity, Shah got ruined by fans for trying to out Winks.

A CoD Fan: Harry considers himself addicted to the Call of Duty game. 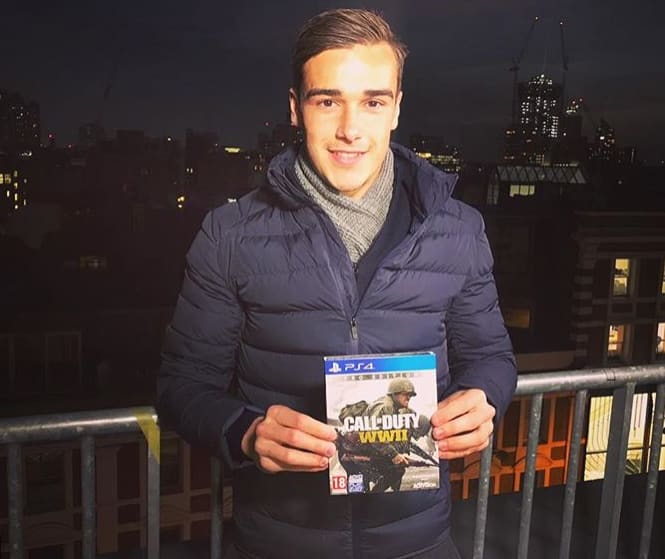 Harry despite his busy soccer schedules still finds time to attend the Call of Duty events. Guess what? he isn’t the only CoD game wizard. 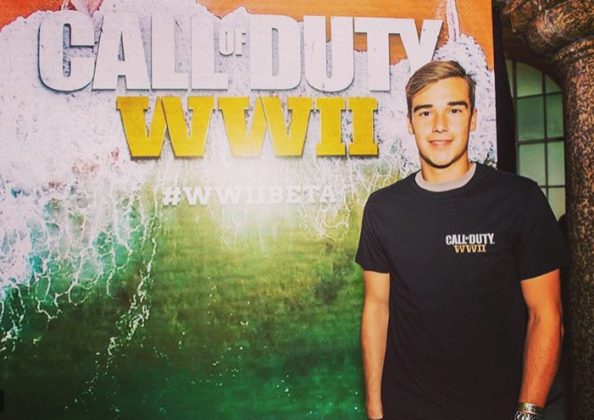 Harry is not as addicted as Hector Bellerin who has once played CoD for 30 hours a week. The game wizard did that despite meeting up club training demands. 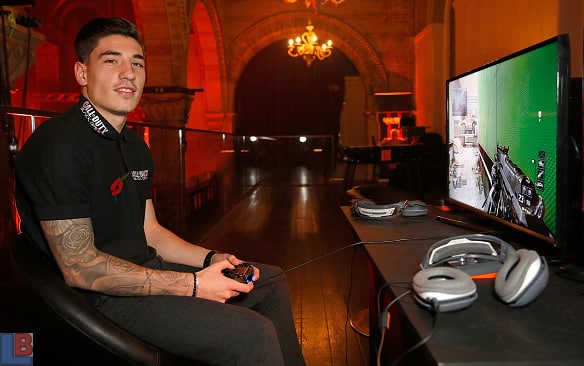 FACT CHECK: Thanks for reading our Harry Winks Childhood Story plus Untold Biography Facts. At LifeBogger, we strive for accuracy and fairness. If you find something that doesn’t look right, please share it with us by commenting below. We’ll always value and respect your ideas.