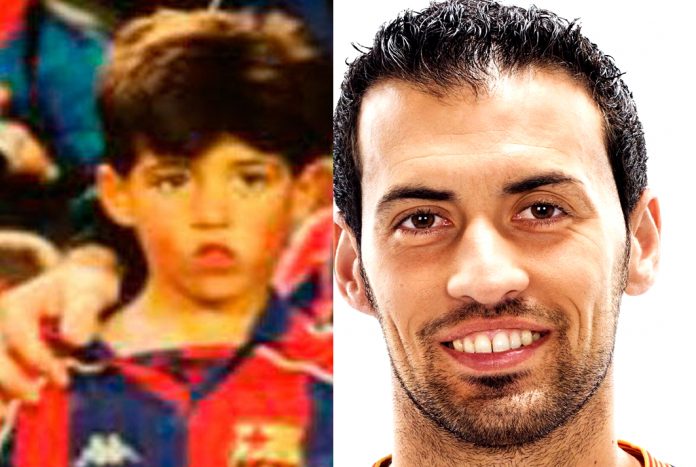 LifeBogger presents the Full Story of Football Genius, who is best known by the nickname; “El Pulpo“.

Our Sergio Busquets Childhood Story plus Untold Biography Facts brings to you a full account of notable events from his childhood time to date.

Yes, everyone knows about his Style of Play at FC Barcelona. And his loyalty to one club -similar to Xavi, Iniesta,  Claudio Marchisio and Ciro Immobile.

However, not many fans have read Sergio Busquet’s Biography, which is quite interesting. Now without further ado, let’s Begin.

For Biography starters, Sergio Busquets Burgos was born on the 16th day of July 1988 to his mother, Loli Burgos, and father, Carles Busquets, both pictured below in the Sergio Busquets Family Photo.

The Spanish Legend was born into a second-generation footballing family background.

He grew up in the Sabadell city of Barcelona. As a child, Sergio played lots of football with his brother Aitor Busquets. Both, as pictured below, had a splendid childhood.

His father, Carles, was also a footballer, a former goalkeeper of Barcelona who stayed at the club for several years during the 1900s, although mostly used as a backup.

Sergio was destined to become a footballer thanks to his father, who had always wanted his little boy to follow in his footsteps. Pictured below, His determination to become a pro like his dad wasn’t a passing fantasy.

His father, Carles Busquets, was a loyal goalkeeper who endured being used as a second choice for years during his time at FC Barcelona.

After reportedly losing out on the first-team competition for the Barca goalkeeping spot, Charles made sure his son, Sergio, started his career at a lower youth academy club. The aim was to ensure little Sergio faced less competition and rise to the top.

At the age of just 7 in the year 1995, Busquets started his footballing journey with the local club Badia. After spending a season there, he moved to CEF Barberà Andalucía in 1996 and stayed there for three years.

Sergio then joined the academy of UE Lleida in 1999 due to his father’s frustrating decision to leave FC Barcelona.

Sergio arrived at Lleida football academy for a professional reason through his father, Carles. A man that was frustrated by Louis van Gaal (former FC Barcelona coach). Van Gaal ran out of patience with him, thus forcing him to leave Barça to sign for Lleida. 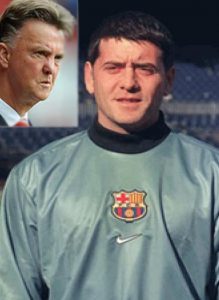 It is pertinent to note that Jose Mourinho (pictured below) was the then assistant coach of FC Barcelona when Carles left. 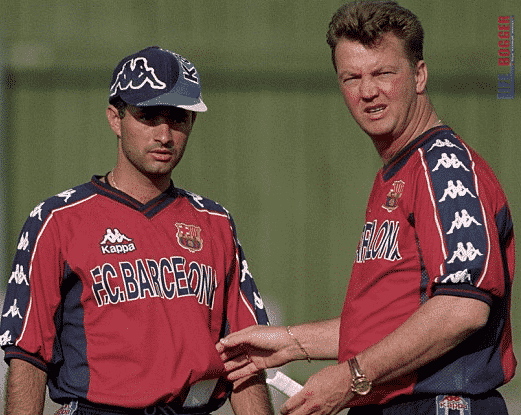 Carles Busquets painfully went with his whole family, among them Sergio, who had to leave his former youth club, Unió Esportiva Barberà to play in Lleida, where he spent three years.

Sergio Busquets rose above all youth ranks. He became the club’s best youth player in his age group as he led his team to win a major trophy. 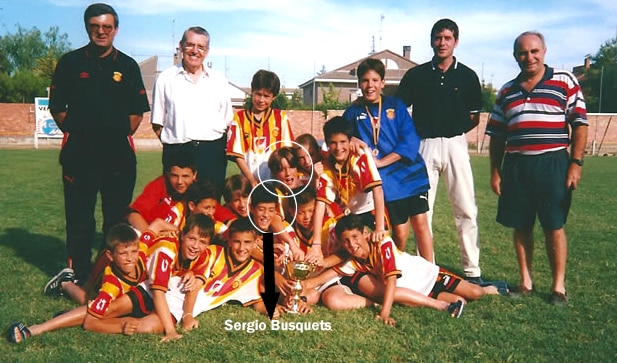 After his dad retired from football at Lleida in 2002, Sergio Busquets felt uncomfortable at the club, feeling there was nothing else to fight for, hence the need to move to greater youth heights.

He got a transfer to Jàbac Terrassa side in 2003. And spent another two-year at the academy. Before being scouted by FC Barcelona football academy, La Masia. The rest, as they say, is now history.

Behind every great man, there’s a great woman, or so the saying goes. And behind almost every successful FC Barcelona Footballer, there’s a glamorous wag or girlfriend, as seen in the name of Elena Galera Moron (pictured with the love of her life below).

As of the time of writing, Sergio Busquets is currently unmarried, possibly because of some private reasons.

However, he has been in a long-term relationship with his partner Elena Galera Moron whom he met in 2013.

Their relationship has continued to flourish ever since they met. While the rest of his FC Barcelona teammates were getting married, Sergio, who is a millionaire at 30 (time of writing), has refused to marry but decided to procreate.

On the 8th day of March 2016, Sergio and Elena welcomed their first child and son, whom they named Enzo. Below is little Enzo looking very sharp with his parents.

A very special moment for Sergio Busquets’ family is during trophy celebrations, a time when both Elina and Enzo join Sergio with the rest of the FC Barcelona family to milk the moment. 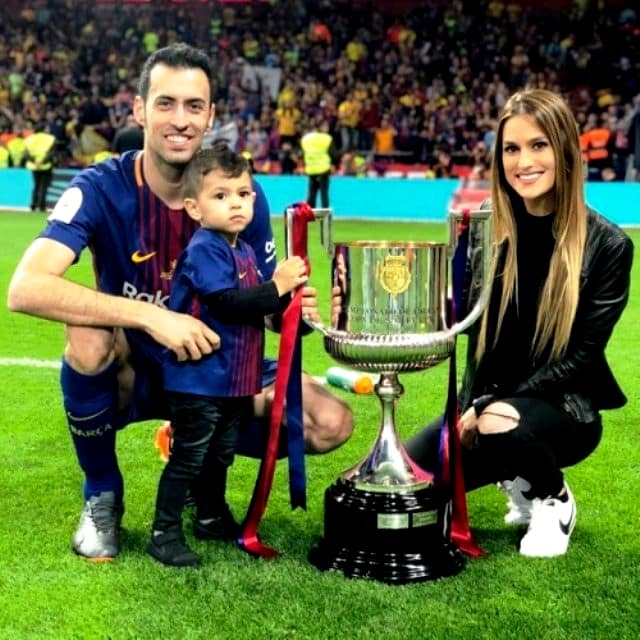 Taking vacations with their dogs after trophy celebration moments or at the end of a season is common to Sergio Busquets and his family. 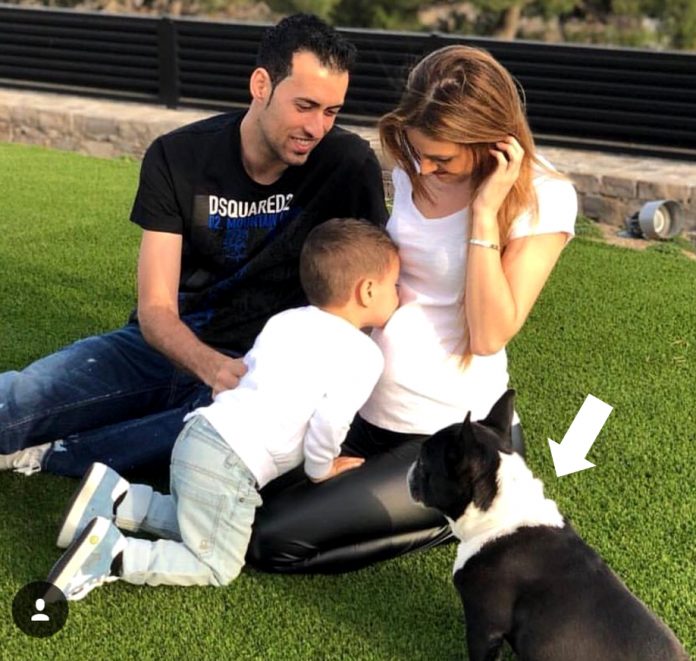 Speaking of dogs, it is pertinent to state that the couple has two dwarf bulldogs. They bear the name Minnie and Lily, who are pictured below. 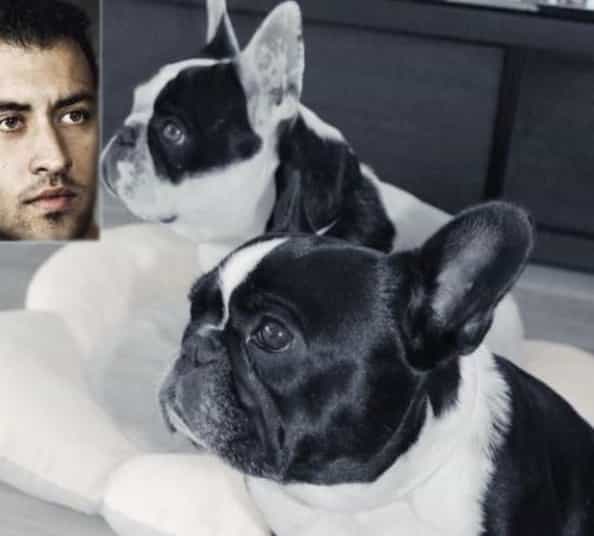 You would easily realize something. That one of the dogs above has a close resemblance. With the one seen in the earlier picture of Sergio Busquets family. Basically, a likeness for dogs is common for FC Barcelona players.

Below is Lionel Messi resting with his dog, who received a remarkable growth spurt between February to September 2016. 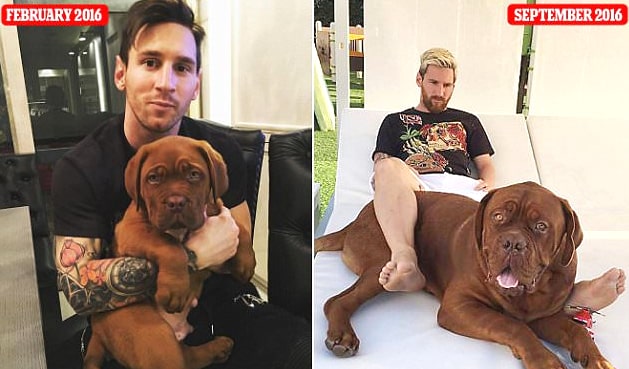 Also in April 2018, both Sergio and Elina disclosed on social media that they were expecting a second child.

“A thing for you, the life in my country”,

He dedicates his tattoo to his maternal grandfather, to whom both were very close before her death.

Looking very carefully at the photo below, Sergio’s lanky appearance denotes some Arabian looks. Sometimes, people always wonder where Sergio Busquets gets his energy from, considering his lanky frame. 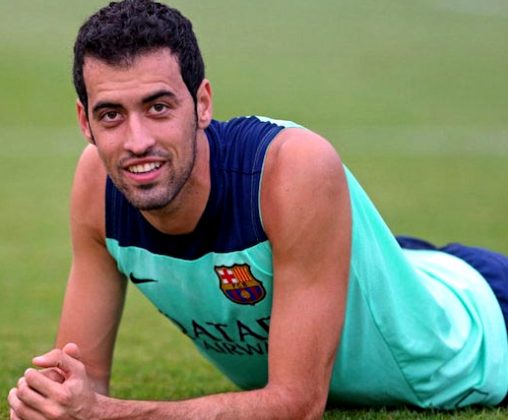 Off the ball, Sergio Busquets’ lanky legs and hands are always put to their vital use. This is seen as he is able to cover ground surprisingly quickly. And permanently engage opposing runners of the ball, putting them to a permanent halt. 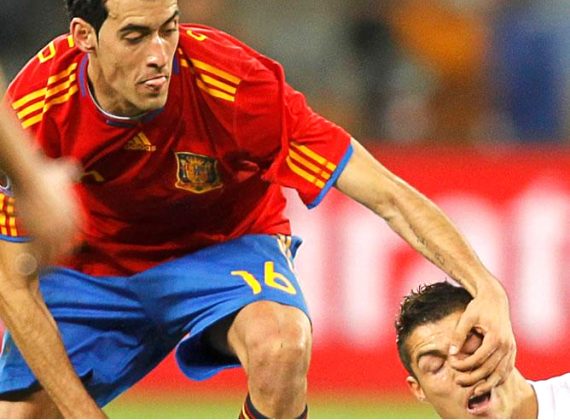 Football players have over time find it difficult to gauge just how big Sergio’s hand blocking and tackling circumference is.

Sergio Busquets is quite versatile on the pitch of play. He brings tranquillity and a great defence cover in his midfield position.

It was because of his ability to provide great cover in the pitch that Carles Puyol offered him the football jersey at the time of his retirement.

Without a doubt, a mistake from Sergio Busquets leaves his team’s defence in shambles. Sergio’s ability to read the game makes it easy for him to make priceless interceptions. It’s always difficult to find a like-for-like replacement for the Spaniard.

Thanks for reading our Sergio Busquets Childhood Story, plus untold biography facts.

At LifeBogger, we strive for accuracy and fairness in our quest to deliver you Spanish Football Stories. Kindly stay tuned for more. The Life History of Koke and Mariano Diaz will excite you.