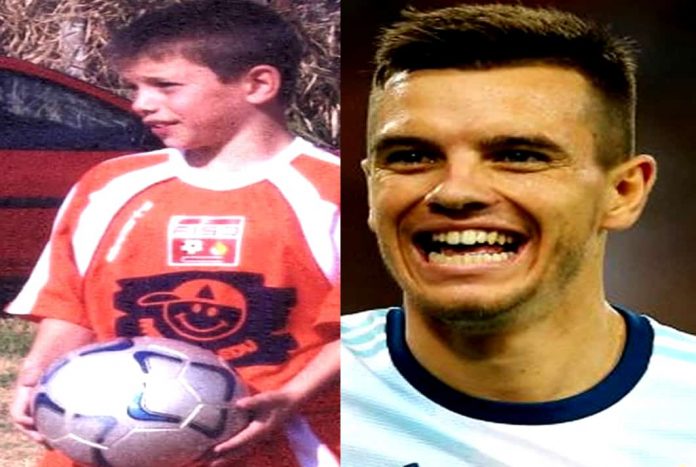 Our Biography of Giovani Lo Celso tells you Facts about his Childhood Story, Early Life, Parents, Family, Girlfriend/Wife to be, Cars, Net Worth, Lifestyle and Personal Life.

In the nutshell, this is a Life Story of the Argentinian professional footballer. We begin from his boyhood days, to when he became famous.

To whet your autobiography appetite, here is his childhood to adult gallery — a perfect intro to Giovani Lo Celso’s Bio.

Yes, everyone knows he is a supremely talented midfielder who has become a game-changer for Spurs under Jose Mourinho.

However, only a few consider our version of Giovani Lo Celso’s Biography, which is quite interesting. Now without further ado, let’s begin.

For Biography starters, this Football Genius is nicknamed “Monito“. Giovani Lo Celso was born on the 9th day of April 1996 in the city of Rosario in Argentina.

He is the third of four children born to his mother, Sandra, and to his father, Juan Lo Celso.

Do you know that Giovani is an Argentine national of mixed ethnicity with Italian family origins?

He was raised in the Sarmiento neighbourhood in Rosario where he had a fun-filled childhood growing up alongside his younger brother – Francesco and two older sisters Luciana & Agustina.

Growing up in a middle-class family background at Sarmiento neighbourhood, it was a bit impossible for Giovani not to become a football enthusiast.

The house that Giovani lived in was just 5 blocks away from a massive football pitch. It also had a garage big enough for Giovani to practice football with his little brother Francesco.

Like most midfield generals, Giovani took his first steps in competitive football at local boyhood clubs before flirting with the decision of what club and league to begin his youth career.

The boyhood clubs include San Jose, a local club where Giovani’s career began in earnest before he joined Argentina’s famous Atlética Jorge Griffa academy for a two-year intensive training.

By the time Giovani was ready to begin his youth career, he had offers coming from top teams, including English side – Everton.

However, the then 15-year-old committed to local club Rosario Central in fulfilment of his childhood dream.

While at Rosario Central, Giovani blossomed in Skillset and maturity as he rose through the club ranks.

In fact, the French side PSG had eyes on Giovani for months and went on to sign the football prospect after he had completed his senior debut season (2015/2016) for Rosario Central.

Giovani didn’t start playing for PSG shortly after they signed him. He was rather loaned back to Rosario Central to get more first-team experience for the 2016/2017 season.

On completion of his loan deal, the midfielder proceeded to PSG and had limited experience playing alongside the likes of Dani Alves, Adrien Rabiot, Draxler and Cavani during the 2018/2019 season.

It is worthwhile to note that PSG had no permanent place for Giovani. As such, they had no problem loaning him to the Spanish side Real Betis with an option to buy.

It was at Real Betis under Quique Setien that Giovani found form and decided to make his deal permanent with the club for obvious reasons (more game time).

At the peak of his career with Real Betis, Giovani earned the reputation of a goal-scoring machine with venomous strikes, a development that lead English side Tottenham Hotspur to sign him on a season-long loan.

However, the Argentine struggled at the club, no thanks to a hip injury that he picked while on international duty.

A hopeful Giovani was still trying to secure a place in the club when his countryman Mauricio Pochettino was replaced with Jose Mourinho.

Undeterred, Giovani worked to find favour in the sight of his new manager by opening the scoreline during Tottenham’s 4-0 victory over Red Star Belgrade in the UEFA Champions League.

It wasn’t long before he cemented his status as Spurs formidable midfielder by scoring the opening goal in a 2-1 win against Middlesbrough in the FA Cup.

It is only a matter of time before we see him and fellow midfield partners Harry Winks, Tanguy Ndombele, Dele Alli and Gedson Fernandes move Spurs to the next great level. The rest, including his COPA America victory below, is forever history.

Away from Giovani Lo Celso’s breathtaking career life, he has an amazing love life that is made beautiful by his girlfriend, Magui Alcacer.

She is not just Giovani’s girlfriend but a swimsuit model, a physiotherapist as well as a kinesiologist.

With such an amazing profile, it is not surprising that Giovani loves and cherish his girlfriend who he met many years ago in Rosario.

Giovani and Magui’s relationship has not given rise to the birth of any child – at the time of writing – neither do the lovebirds have son(s) or daughter(s) out of wedlock.

Moving on to Giovani Lo Celso’s family life, he is blessed to have supportive parents and siblings. We bring you facts about Giovani’s family members beginning with his parents.

Juan Lo Celso and Sandra are the midfielder’s mom and dad respectively. Their immense contributions to Giovani’s overall development and progress remain ever fresh in his memory.

As such, the midfield general is always quick to credit his dad for taking him to train. Neither does he forget noting that his mom often admonished him to be humble and always focused on the ball.

Giovani’s parents still share a close bond with him – at the time of writing – and are striving to ensure that he gets the best out of life.

Like we earlier stated, Giovani Lo Celso is the third child born to his parents. He has two older little-known sisters identified as Luciana and Agustina, as well as a younger brother – Francesco who plays as a midfielder for Rosario Central at the time of writing.

All four siblings had the best of a fun-filled early life while growing up together. They also love and support one another. Giovani Lo Celso’s parents gave birth to the following children.

Moving on to Giovani Lo Celso’s extended family life, there are no records of his ancestry and family roots, particularly his paternal grandparents as well as maternal grandfather and grandmother.

Similarly, Giovani’s uncles, aunts and cousins are largely unknown, while his nephews and nieces are yet to be identified at the time of writing this biography.

Here is just the right place to feast your eyes on texts that reveal facts about the playmaker’s persona in order to help you get a complete picture of him.

To begin with, Giovani’s persona reflects traits exhibited by individuals guided by the Aries Zodiac sign.

He is ambitious, easygoing, emotionally intelligent, energetic and has no problem with revealing facts about his personal and private life.

The Midfielder’s interests and hobbies include swimming, travelling and spending a good time with his family and friends.

Regarding Giovani Lo Celso’s money-making endeavours and spending habits, he earns considerably well in salaries and wages for playing top-flight football, while endorsements contribute to the growth of his net worth, which is still under review at the time of writing this bio.

The midfielder has not been spotted driving cars that may confirm suspicions about his rumoured luxurious lifestyle, while the value of the house or apartment that he lives in is yet unknown.

However, he has a thing for spending vacations at expensive resorts, including Disneyland Park.

Wrapping up Giovani Lo Celso’s childhood story and biography, here are little-known or untold facts about him.

Like Bale & Gabriel Jesus, Giovani uniquely celebrates his goals by raising his right hand up with five stretched fingers.

While the midfielder is at it, he raises his left hand with an outstretched finger that points to his right hand.

According to the Midfielder, all six outstretched fingers pay tribute to every member of his immediate family, including himself.

The Midfielder has a traceable Italian heritage.

Thus, he obtained citizenship in the country and possesses an Italian passport to that effect. However, Giovani, just like Papu Gomez, opted to represent Argentina.

Do you know that Giovani Lo Celso’s FIFA 20 Overall Rating of 83 speaks well of the amount of work that he has put into developing his skill set ever since he began playing top-flight football?

Interestingly, he also has a Potential Rating of up to 89. There’s no denying the fact that the ratings would only go nowhere but up!

Giovani Lo Celso is not given to smoking at the time of writing this bio. However, he drinks responsibly with teammates, family and friends on special occasions.

The midfielder – with a height of 5 feet, 10 inches – plays in the subconscious league of young footballers who don’t have tattoos at the time of writing.

Notwithstanding, he might nestle plans of getting body arts in the future when he establishes himself as one of the world’s bests.

Giovani Lo Celso’s parents raised him in adherence to the Christianity religion. This is evident in the names which his mother Sandra and siblings – Augustina and Francesco – possess.

However, it is not known whether Giovani practices Christianity because he is not big on religion in social media and during interviews.

FACT CHECK: Thanks for reading our Giovani Lo Celso Childhood Story Plus Untold Biography Facts. At LifeBogger, we strive for accuracy and fairness.