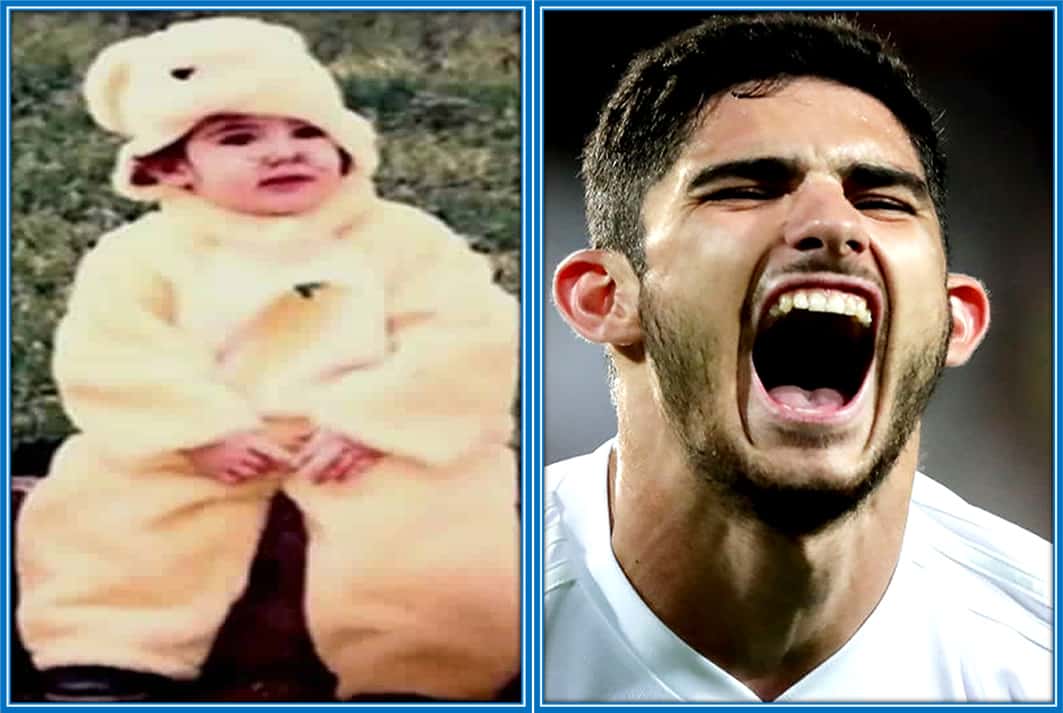 In simple terms, this is a story of the Footballer’s Life Journey, from his boyhood days to when he became famous.

To whet your autobiography appetite, check out his boyhood to adult gallery — a perfect introduction to Goncalo Guedes’ Biography.

Yes, everyone knows of the winger’s versatility with a wide-ranging skill-set.

However, only a fraction of football aficionados has read Goncalo Guedes’ Biography, which details facts of little-known happenings in his life. Now, Without further ado, let’s begin.

For Biography starters, Gonçalo Manuel Ganchinho Guedes was born on the 29th day of November 1996 at the municipality of Benavente in Portugal.

He is one of 2 children born to his little known mother and to his father, who goes by the name Rogério Guedes.

Young Goncalo grew up at his birthplace in Benavente at Portugal alongside his older brother and only sibling – Joao Maria – who is reportedly said to be two years older than him.

Growing up in Benavente, Goncalo had barely learnt to walk when he began playing with a ball. He had no interest in toys and was fond of carrying two balls with him when he eventually learnt to walk.

At this point, many would begin to wonder how Goncalo fell in love with football, especially when the town he grew up at is more known for bullfighting than soccer.

It is worthwhile to note that Joao (Goncalo’s brother) began playing football at a tender age.

Thus, It was only natural that Joao’s passion for soccer would rub on his younger brother. What’s more, Goncalo Guedes’ parents were sports enthusiasts who had no problems with letting their children play football in the streets and at a pitch behind their house.

By the time Goncalo was 5 years of age, he began accompanying Joao to a football school at Ribatejo where the older sibling trained in goalkeeping.

While the siblings were at it, Goncalo could only watch because there was no team category for younger kids of his age.

However, when there were competitions that didn’t require the presentation of identity cards, the team’s coach gave room for eager younger kids to prove themselves, an opportunity that Goncalo did well to maximise.

In fact, he had excellent ball abilities such that people who knew his dad made pressing calls that the then kid ought to be building a career in the sport at Benfica.

Heeding to the voice of many, Goncalo’s dad did his best to ensure that the football prodigy began training with Benfica at the age of 6.

However, it wasn’t until 3 years later that the then 9-year-old officially became a part of Benfica’s youth system.

The youngster’s progress through the club ranks was without hitches.

He made his professional debut with Benfica’s B in April 2014 and went on to begin making appearances for the club’s first team months later in October that year.

At the peak of Goncalo’s career with Benfica, he scored against Atletico Madrid in September 2015 to become the youngest Portuguese scorer in the Champions League group stages since Cristiano Ronaldo.

Such a promising feat, among other impressive performances, made him pop on the radar of PSG, which he lent his signature to in 2017.

However, he did get enough playtime because the presence of other wide players like Julian Draxler and Angel Di Maria made sure that he sat on benches.

Fortunately, PSG gave Goncalo to Valencia on loan in 2017. He was extensively used by the French side and he repaid their confidence in him by netting goals and receiving plaudits from the international sporting press for his early-season form.

Thus, it wasn’t surprising that the Spanish side made his contract permanent in 2018.

Fast forward to the time of drafting this bio, Goncalo has cemented his place at Valencia by leading the club to many victories, including defeating Barcelona to win the 2019 Copa del Rey Final.

Neither is he known to be an ugly duckling at international duty as he did his bit to help his country – Portugal win their first-ever UEFA Nations League Finals in 2019.

Moving on to the winger’s love life, he isn’t in a marital relationship as of June 2020, however, he does have a beautiful girlfriend who goes by the name Madalena de Moura Neves.

The duo have been dating from the time Goncalo was a nobody at Benfica till when he became known.

What’s more, Goncalo Guedes’ girlfriend is a graduate of management and she does evidently does a good job in keeping much of their envious relationship away from prying eyes.

Did you know that Goncalo Guedes’ girlfriend is not the only person close to his heart? We bring you facts about the winger’s family members, beginning with his parents.

Rogério Guedes is the father of the football genius. There’s little to no information regarding the kind of Job he had during Goncalo’s early life.

Nonetheless, we do know that he takes his fair share of credit for the winger’s success in career football.

It was Rogério who drove young Goncalo to training. He is happy that he did live a life of dedication to his childhood dreams. In addition, he is ever proud of what his youngest son has become.

Evidently, the least known of Goncalo Guedes’ parents is his loving mother. Yes, the Winger rarely talks about her, but it goes without saying that her role in his development is immeasurable.

As we did well to mention earlier, Goncalo Guedes’ parents have just two children who are the winger and Joao (his younger brother).

Joao had early interests in football as a goalkeeper. However, he didn’t become a professional football like Goncalo who he loves and unreservedly supports.

Away from the winger’s immediate family, there are no records of his family roots and ancestry.

As such, his grandparents, aunts and uncles are largely unknown. Similarly, the winger is yet to reveal facts about his cousins, nephews and nieces.

Who is Goncalo beyond football, and what is the nature of his character off the pitch of play? What truths do friends and family hold to be self-evident of his persona?

To begin with, his traits are similar to those of individuals whose Zodiac Sign is Sagittarius.

The winger is incredibly down-to-earth, emotionally intelligent, calm and awe-inspiring. He loves travelling, swimming, and spending a good time with family and friends, among other interests and hobbies.

Goncalo Guedes Lifestyle – Net Worth and How he Spends his Monies:

Regarding how the footballer makes and spends his money, he has an estimated net worth of $5 million at the time of drafting this bio.

The bulk of the winger’s wealth have origins in the wages and salaries that he gets from being a world-class winger.

In addition, the soccer player enjoys a steady stream of income from endorsements. However, he doesn’t live the flashy lifestyle of rich footballers.

In fact, many that are close to the winger can attest that he cherishes a conservative lifestyle over unnecessary luxury.

To wrap up our Goncalo Guedes’ childhood story and biography, we deem it fit to present lesser-known or Untold facts about the winger.

Salary Breakdown in relation to the Average Portuguese Citizen:

Comparing his Salary to the Average Citizen :

Since you started viewing Goncalo Guedes‘ Bio, this is what he has earned.

Did you know?… The average Portuguese who earns a monthly average of €2,750 would need to work for at least fourteen years and two months to earn €486,080.

This is Goncalo Guedes’ salary (monthly basis) at Valencia.

The wide player has a fair overall FIFA rating of 82 points. The poor rating has something to do with his less illustrious performance during the 2019/2020 season.

It will only be a matter of time before he steps up his game to achieve his full potential rating or 88 points.

There’s more to 1996 than being the birth year of Goncalo. It was the same year that the first version of the Java programming language was released.

1996 was also the year that movies like Independence Day and Mission Impossible hit cinemas.

The winger has a thing for cats, especially those of rare breed. He can be seen caressing a cat in the photo below. The cat evidently does look to be at peace with the winger, and no doubt likes him.

To make life easier, we’ve prepared this table which provides concise information on Goncalo Guedes’ Biography Facts. Here, you can get quick facts about the Portuguese footballer.

Thanks for taking out time to read this insightful write-up on Goncalo Guedes’ biography.

At Lifebogger, we have our eyes set on delivering childhood stories about Portuguese players. Stay tuned for more A Seleção stories. The History of Goncalo Ramos and Vitinha will excite you.

Please don’t hesitate to contact us or place a comment in the box below if you come across anything that doesn’t look right in this article.