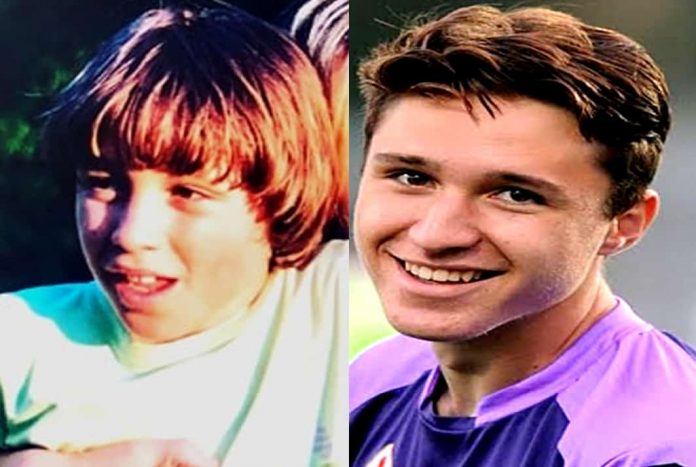 Our Federico Chiesa Biography tells you Facts about his Childhood Story, Early Life, Parents, Family, Girlfriend/Wife to be, Cars, Net Worth, Lifestyle and Personal Life.

In the nutshell, this is a Life Story of the Italian professional footballer. We begin from his boyhood days to when he became famous.

To whet your autobiography appetite, here is his childhood to adult gallery — a perfect summary of Federico Chiesa’s Bio.

Yes, everyone knows he is a talented, pacy and hard-working winger. However, a few consider our version of Federico Chiesa’s Biography, which is quite interesting. Now, without further ado, let’s begin.

For Biography starters, he is nicknamed “Pepo“. Federico Chiesa was born on the 25th day of October 1997 to his mother, Francesca Lombardi and father, Enrico Chiesa in the port city of Genoa, northwest Italy.

Federico Chiesa’s parents had him as the first out of their three lovely kids (male and female).

The football genius is a bonafide European national with Italian family roots and Ligurian ethnicity.

He grew up in Florence, located in Italy, alongside his younger sister Adriana and a very much younger brother, Lorenzo. Below is a cute childhood photo of Federico Chiesa’s siblings.

Growing up in Florence, Federico began playing football from the age of two, which was the time he learned how to walk.

His early foray into football neither came from a lack of other childhood sports to participate in nor had ulterior motives attached to it by his parents.

It was rather a question of DNA because Federico is from an upper-class family background that lives and breathes football, thanks to the football engagements of his father – Enrico who was a professional football player at the time.
As such, it is worth noting that the then youngster’s passion for the sport was hereditary and had nurturing from his dad, who saw prospects in him, as well as his mom, who was a fan of her husband’s football engagements and mentoring.
Below is a sweet photo of Federico Chiesa’s parents as they play their nurturing role on him-  love, attention, understanding, acceptance, time, and career support.

Early on in his life, Federico Chiesa’s parents had him enrol with the local club U.S. Settignanese, located in Florence, very close to their family home at the time Federico was aged 5.

While playing with the small club, Federico Chiesa’s parents made him start acquiring education at the International School of Florence, which is one of the oldest international schools in Europe.

The development was to ensure that Federico would have a great future regardless of whether his career buildup in football had a happy ending or not.

Federico made them happy by studying well and even went on to study sports science at the university level much later.

Notwithstanding, Federico was not found lacking in his football engagements. In fact, he would never cease to recall that his dad always told him to train 100%, as though every training was the game itself.
As a result, young Federico’s rise through the ranks of Fiorentina was swift and deserving because he wasn’t made to play in recognition of his football roots or hereditary titles.
He was rather made to earn his stay and promotions by being strong and ambitious.

Upon having significant outings with Fiorentina’s under-19 squad for two seasons (2014–2016) Federico got his first professional contract with the club in February 2016 and made his competitive in a 2–1 away defeat against Juventus.
Thereafter, he did struggle a bit to find his footing and identity. Even after scoring his first professional goal in a Europa League 1–2 away victory over Qarabağ, Federico was sent off during the same match for a double booking.
This is perhaps, one of the moments of Federico Chiesa’s Biography when the going got tough.

It wasn’t until the next year, specifically in January 2017, that Federico found stability and got a contract extension that would see him continue playing top-flight football at Fiorentina until June 2021.
The winger went on to begin scoring key and opening goals in Serie A for Fiorentina in the ensuing years.
He even had his first hattrick for the club in their 7–1 home victory over Roma during the quarter-final match of the Coppa Italia in January 2019.

Moving on to Federico Chiesa love life, he is known to have had two girlfriends with no son(s) or daughter(s) out of wedlock (as at the time of writing). First was Caterina Ciabatti, a beautiful lady that he met in 2017.
They soon began living together in a house on the bank of the Arno at Tuscany. Sadly the seemingly perfect love birds went different ways in late 2018.
Months later, Federico began dating Benedetta Quagli in 2019 and made their relationship known by uploading photos of them having good times on Instagram.
The lovebirds are deeply in love and there is no ruling out the possibility that they could be serving couple’s goals as husband and wife in the nearest future.

The amazing winger is a product of a loving and supportive family. In this section, we’ll bring you more information about Federico Chiesa’s Family members starting with his parents.

Ex-professional football player Enrico Chiesa is Federico’s father. He was born on the 29th day of December 1970 in Genoa Italy.
He began playing competitive football at the amateur club Pontedecimo and went on to sign his first professional contract with Sampdoria in 1989.
Famed as prolific goal-scorer, Enrico spent the next two decades of his career playing for top Italian teams that include Parma, Fiorentina and Lazio.
He ended his career with Figline in 2010 and has been ever since enjoying his retirement by mentoring young people like his son into top-flight football.
There are no doubts that Federico is close to his dad who he credits for giving him professional advice regarding the importance of fair play as well as respect for players and referees.
Above all, he does not go into how the winger should play but leaves that aspect to his coaches.

Francesca Lombardi is Federico’s mom and the least popular of the winger’s parents. This is because the winger is yet to talk about or make references to her during interviews.
Thus, not much is known about the mother of three, save for the fact that she is a good wife to her husband and a pillar of support to her kids.

The immediate members of Federico Chiesa’s family comprise himself, two younger siblings (his sister Adriana and brother Lorenzo) and his parents.
Did you know?… Adriana pictured below schools at the University of Milan – as of February (2020) – where she studies Economics.
On his part, Federico Chiesa’s brother Lorenzo at the time of writing, plays in the youth system of Fiorentina and hopes to achieve a breakthrough as his big brother did.

Regarding Federico Chiesa’s Family ancestry, there are no records of his maternal and paternal grandparents, while his uncles, aunts, nephews and nieces are largely unknown at the time of writing this biography.

Personal Life away from what he does on the pitch:

Did you know that Federico Chiesa embodies personality traits that are exhibited by individuals whose Zodiac Sign is Scorpio? He is passionate, intuitive, outstanding and hard-working.
Added to traits of Federico Chiesa’s persona is his penchant for not revealing much about his personal and private life.
The winger’s interests and hobbies include studying, playing video games and spending a good time with his family and friends.

Regarding how Federico Chiesa makes and spends his money, he has an estimated net worth of $2 million at the time of writing this biography.
Streams of the winger’s wealth originate from the wages and salaries he receives from playing top-flight football.
The winger also racks up significant income from endorsements. As such, he has no problems cruising in super-exotic cars or living inexpensive houses and apartments in Italy.

To end our Federico Chiesa childhood story and biography, here are little-known or untold facts about the winger.

Ever since he busted into the club football scene, there’s been interest on how much Federico Chiesa earns.

Truth is, the Italian’s contract with ACF Fiorentina sees him pocketing a whopping salary of around €3.1 Million euros per year.

More surprising below is Federico Chiesa’s salary breakdown per year, month, day, hour, minute and seconds (as of the time of writing).

Since you started viewing Federico Chiesa‘s Bio, this is what he has earned.

Wao!. Did you know?… The average man in Italy needs to work for at least 1.6 years to earn €50,000, which is the amount Federico Chiesa earns in a month.

The winger doesn’t drink irresponsibly, neither does he have health complications arising from smoking. He is rather religious about maintaining a healthy lifestyle for his best interests in top-flight football.

Federico has less than five years of experience playing top-flight football, a development that explains why he has a low FIFA rating of 78.
It is a known fact that time heals and improves. The case would not be any different for the winger who has the potentials of achieving an overall rating of 85.

It appears Federico Chiesa’s Family practices the Christianity religion. However, the Italian winger himself hasn’t gone public to profess his faith during interviews.

Notwithstanding, our odds are in favour of him being a Christian like a good number of Italians.

Federico Chiesa has a fair height of 5 feet, 9 inches and spotless fair skin. However, he has no tattoos at the time of writing and probably doesn’t flirt with the idea of acquiring body arts.
He seemingly looks to match and surpasses the records of his dad, who had no tattoos during his 2-decade career in top-flight football.
Like father like son: Wouldn’t you agree? Image Credit: Instagram.

Whom he idolizes and admires:

The final of Federico Chiesa’s fact is the talk about whom he idolizes and admires. Did you know?… the winger grew up admiring Brazilian legend Ricardo Kaka as his childhood hero.
The winger also admires his contemporaries Leroy sane and Kevin de Bruyne for the impressive manner in which they play their roles at Manchester City.