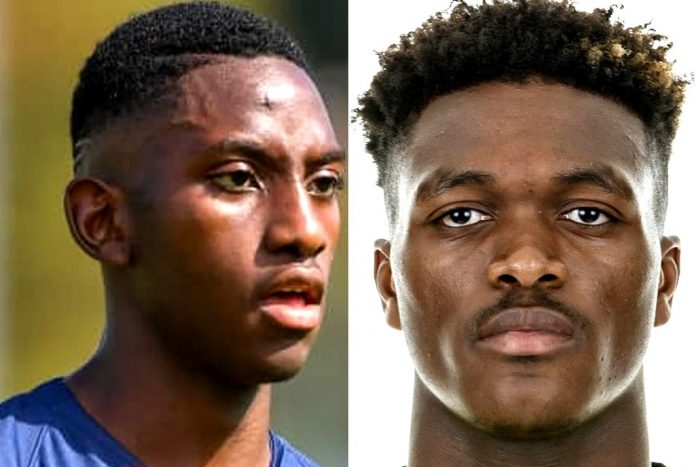 In a nutshell, this article explains the Full History of Dan-Axel Zagadou. We begin from his Dan-Axel boyhood days right to the moment he became famous as a footballer.

To whet your autobiography appetite, here is his childhood to adult gallery — a perfect summary of Dan-Axel Zagadou’s Bio.

Yes, everyone knows he is that massive defender with great tackling and interception skills.

However, not many football fans have read a concise version of Dan-Axel Zagadou’s Biography, which is quite interesting. Now, without further ado, let’s begin.

For starters in his Biography reading, his nickname is “Daxo“. Dan-Axel Zagadou was born on the 3rd day of June 1999 at the commune of Créteil in France. He is one among a number of children born to his little-known father and mother.
Young Dan-Axel grew up at Créteil in the southeastern suburbs of Paris, France, alongside siblings whom only two are known to us at the time of writing. They are his older brothers, Dressy and Yohan.
Growing up in Créteil Dan-Axel was a strong and athletic kid who chose to tread the paths of his older brother Dressy by playing football which is the most popular sport at the commune of Créteil.

The development was not met with resistance by Dan-Axel parents who are both Ivorians but made the key decision of migrating to France long before their most promising son -Dan-Axel was born.
Like heads of most migrant families, Dan-Axel’s parents held their hopes high and were optimistic of an auspicious future for the family through their kid’s sporting and academic engagements.

As such, they were more than happy to have Dan-Axel join his hometown club – US Créteil. It was at the local club that he began playing competitive football from a very young age with family support.
While the youngster was at it, he paid commensurate attention to his academics and found education beneficial to his all-around development.
Little wonder Dan-Axel would many years later, advise children around the world to go to school. According to him, schooling is the most important thing to do.

Even at that, football was also important to Dan-Axel. This was evident in the manner in which his impressive development at the junior ranks of US Créteil made Paris Saint-Germain regard him as a prospect.
As a result, Dan-Axel was brought to PSG at the young age of 12. He began a steady rise through the Les Parisiens ranks up until he became a member of the club’s reserve squad in 2016.

While with PSG’s reserve squad, Dan-Axel only made 9 appearances in the 2016–17 French fourth-tier football system known as Championnat de France Amateur.
At the end of that season, it became apparent to him that achieving a breakthrough into PSG’s first team would be very hard.
Although the club’s management did play motivating roles in assuring Dan-Axel and other players in his position of a brighter future, he chose to leave with hopes that he would not regret the decision.

Did you know that Dan-Axel did not entertain advances from Manchester City and RB Leipzig?
Instead, he chose to lend his signature to Borussia Dortmund in view of the club’s track record of giving youngsters the opportunity of getting a progressive taste of first-team football.
Although the defender did struggle a bit during his debut season (2017/2018) for the German side, his friendship with then-teammates Pierre-Emerick Aubemeyang and Ousmane Dembele, among other factors made him found to form the following year (2018/2019).
Fast forward to the time of writing this bio, Dan-Axel is a key defender for Dortmund with a formidable on-pitch presence that is enough to bounce off opposing strikers. The rest, as they say, is history.

Any defender who is tall and fairly handsome like Dan-Axel could be at best with a wife or worse, without a girlfriend.
Dan-Axel’s relationship status at the time of writing tilts to being single while he has no sons or daughters out of wedlock.
The defender understands that being attractive includes defending in captivating ways. As such, he has his focus set on perfecting his art as he dates the opportunities that playing top-flight football has to offer.

Beyond the amazing rise of Dan-Axel and his sleek defensive capabilities is an encouraging family. We bring you facts about the defender’s family life.

Dan-Axel’s mom and dad are sport-loving individuals who did play supportive roles in the life and rise of the defender. Their greatest gift to him was migrating from Ivory Coast to France long before he was born.
This is because France did present more opportunities to the defender than the lands of his family origins.
Though both parents are yet to be seen cheering the defender from the stands in Germany, it wouldn’t be long before they do so in recognition of the milestone that he is achieving in European football.

Dan-Axel has four brothers, of whom little is known about. They include Dressy and Yohan. Yohan is the older sibling who lives with Dan-Axel in Germany and ensures that he never loses focus.
On his part, Dressy is also an older brother whose early inspiring engagements in football made Dan-Axel adopt the game as a childhood sport.
Dressy plays in number 2 defensive capacity at Spanish third division club Santa Catalina and was the reason why Dan-Axel chose to wear the number 2 shirt number.
Although no mention has been made about Dan-Axel’s sister(s), we are positive that he does have at least one sister, especially after studying the photo below.

Away from Dan-Axel’s immediate family life, not much is known about his ancestry and family roots, especially as it relates to his maternal and paternal grandparents.
Similarly, there are no records of the defender’s uncles, aunts, and cousins while his nephews and nieces are yet unknown.

Did you know that Dan-Axel embodies likeable personality traits that include emotional intelligence, focus and humility?
In addition, he knows how to connect with people and possesses the gift of self-expression.
The awesome defender, whose Zodiac Sign is Gemini, rarely reveals details pertaining to his private and personal life while activities that make up his interests and hobbies include watching movies, listening to music, shopping and spending a good time with his family and friends.

Regarding how Dan-Axel Zagadou makes and spends his money, he has a net worth of about $455,460 at the of writing this bio.
Contributing streams to the defender’s net worth include the salaries and wages he receives for playing first-team football.
In addition, endorsements with brands like Adidas does a lot to boost his wealth base. As a result, young Dan-Axel is not alien to the pleasures of life that includes cruising the street of Germany with expensive cars that, include an exotic Mercedes, as well as living inexpensive apartments and houses.

To bring an end to our Dan-Axel Zagadou Childhood story and biography, here are little-known or untold facts about the defender.

About his Humble Salary Beginnings:

Ever since he busted into the club football scene, there’s been interest in how much Dan-Alex Zagadou earns.

The truth is, the Frenchman’s contract with Borussia Dortmund sees him pocketing a humble salary of around €234,000 euros per year.

Crunching that into smaller numbers, we have the following earnings per year, month, day, hour, minute and seconds (as at the time of writing).

Since you started viewing Dan-Axel Zagadou ‘s Bio, this is what he has earned.

Did you know?… The average man in France needs to work for at least 6.5 months to earn €19,500, which is the amount Dan-Axel Zagadou earns in a month.

Dan-Axel Zagadou’s parents raised him in adherence to the Christianity religious beliefs. Trus is, he is a Christian and a prayerful one at that.
He once said in an interview that one of his superstitions includes reading the bible and praying before the start of matches.

Dan-Axel has an overall FIFA rating of 79 points. The fair rating is but a progressive attestation of how far he has come in football.
It also proves that it would only be a matter of time before the defender achieves his potential rating of 86.

Dan-Axel does not smoke and has not been caught drinking irresponsibly. This underscores the fact that the football genius knows how to comport himself in a professional manner and would not engage any habit that is inimical to his health.

Dan-Axel is without tattoos or body arts at the time of writing. He is rather in tune with having a good body build that is in tune with his impressive height of 6 feet, 5 inches.

FACT CHECK: Thanks for reading our Dan-Axel Zagadou Childhood Story Plus Untold Biography Facts. At LifeBogger, we strive for accuracy and fairness.