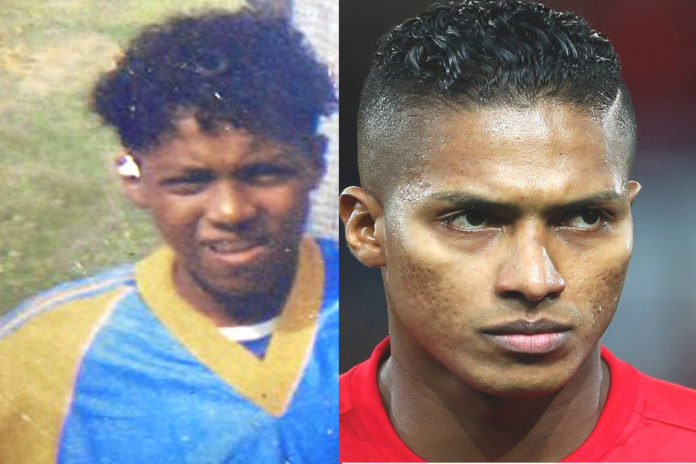 LifeBogger presents the Full Story of a Versatile Footballer who is best known by the Nickname; “The Commander”.

Our Antonio Valencia Childhood Story plus Untold Biography Facts brings to you a full account of notable events from his childhood time till date.

Yes, everyone knows about his strength and versatility, but few fans consider our Antonio Valencia’s Bio which is quite interesting. Now without further adieu, let’s Begin.

Luis Antonio Valencia Mosquera was born on the 4th of August 1985 in Lago Agrio, near the city of Nueva Loja, Ecuador, which is located in the Amazon rainforest.

He was born to his mother, Teresa Mosquera and father, Luis Antonio Valencia. Both were small-scale traders. 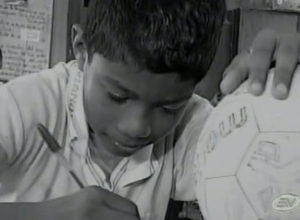 A very quiet, hardworking and shy boy during his childhood time, Antonio Valencia was an intelligent pupil in his class.

He was someone who held football close to him even while he studied in school.

After school hours, Valencia would help his mother sell drinks outside the stadium of his local club at Lago Agrio.

Growing up, Antonio Valencia also helped his dad who was also a trader. He and his two brothers would search the streets for glass bottles for his father to sell to a bottle deposit in the capital, Quito.

Indeed, times were tough, but that didn’t stop the youngster from realising his dream. Valencia used to play barefoot on the pitch next to the bungalow he shared with his parents, brothers and sister.

When Valencia was aged 11, scout Pedro “Papi” Perlaza spotted him playing on a dusty field near his home, and signed him to the local FA-run sports academy in Sucumbíos.

At the age of 16, Valencia did not tell his father he left home to take up an offer to play for El Nacional, the military-backed club in Quito.

In his own words… “I didn’t tell my father because I knew he wouldn’t let me go to that dangerous and crime-infested area,” Valencia confessed. 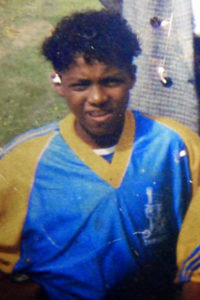 Nobody knew about Valencia’s decision, except his mother and his elder brother, Carlos Alfredo, who paid the fare for his eight-hour bus journey. Valencia began in central midfield and on a salary of 50 dollars a month.

He won his first club title as part of the El Nacional team that won the 2005 Clausura Tournament, earning him the attention of several European scouts. This was how he went to Villarreal.

As he progressed up the ranks in his professional football career, Valencia made a decision to move to the Premier League. He settled with Wigan Athletic, where he made a serious impact in a short time.

This made Manchester United call for his services. Valencia accepted, thanks to Ryan Giggs his mentor, who motivated and pulled the move for him.

Antonio Valencia’s Career success is an inspiration to the likes of Michael Estrada, Moisés Caicedo, Enner Valencia, etc, who have made Ecuador proud thanks to their role in the country’s 2022 FIFA World cup qualification. The rest, as they say, is now history.

Who is Zoila? Antonio Valencia Wife?

Valencia has been married to Zoila since 2005. Both met and fell in love during his glory days in El Nacional. 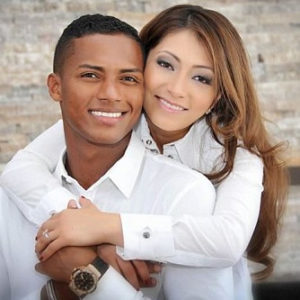 Valencia quickly married her and took her to Europe with him after Villarreal called him. He and his wife, Zoila, have a daughter named Domenica, who was born during the 2006 World Cup. She is all grown up as seen in the picture below. 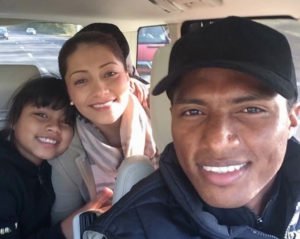 Antonio Valencia has been accused by his wife of cheating on her. The lady involved is called Sophie whom it was alleged that Valencia occasionally pays £1,600 for her flight from Norway to Manchester.

Valencia, who has a daughter with his wife Zoila Meneses, met up with part-time nurse Sophie at the Manchester Airport Hilton. This happened after she flew in from her native Norway the day before a Manchester derby.

Upon spotting her and tracking her to her hotel, Antonio Valencia sent a letter to her hotel of residence. Sophie posted a picture on social media of an envelope bearing the star’s name. 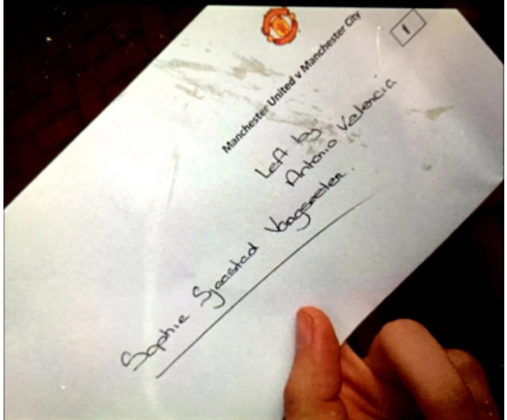 The contents contained Antonio’s contact details and a request to have her as his girlfriend. On the day of the game, Sophie sent an image of herself inside the Old Trafford stadium. Antonio also sent photos and videos of his toned body as seen below. 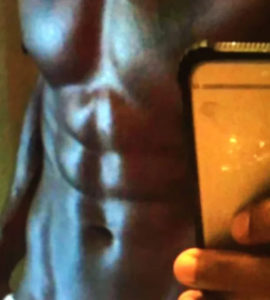 As Sophie puts it; 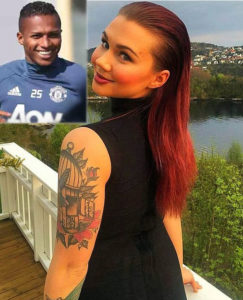 “We began messaging privately and got to know each other. He sent me photographs of him sunbathing and visiting Ecuador.

I even got one of him with his mother. He asked me three or four times to visit him. He kept telling me how pretty and beautiful I am. I always refused.

But finally, when I had a second thought, I agreed and told him I am ready to see him. Immediately, he said he would treat me like a queen.

Then I thought, ‘Why not?’ ..I certainly didn’t know then that he had been in trouble before for meeting women online and begging them to visit him so he can sleep with them.

I quickly check online and observed he is married. When I asked about his marriage, he claimed it was dead.

This was before we slept together. He also told me about his wife, that he was very unhappy in his relationship with her and had been with her 12 years”.

Antonio Valencia’s wife after seeing online reports of her husband, came out to accuse him of creeping out of their home to different Manchester hotels to make love with Sophie.

Valencia was also blasted by fans and even boss Jose Mourinho, but claimed his marriage was already over. The humiliated football star insisted:

“It is important to clarify that my current civil status is single. Over the past months, I have not had any formal relationship. As usual, my efforts are focused on my professional career and on my daughter.”

His wife also said in an interview…“Its unfortunate my marriage is over, I am definitely better off without him. He’s a creep.

He’s cheated on me countless times. I just had a lucky escape. He thinks his money gives him so much power he can do anything.”

As observed earlier, Antonio Valencia comes from a poor family background before football finally paid off. When the Ecuadorian warrior was a child, his house was made of wood and barely stood one floor tall.

This was where his parents, Luis Antonio and Teresa, raised him and his siblings. Here, we give you details about his family starting from his parents.

He is someone who is very close to his children, as seen in the picture below. 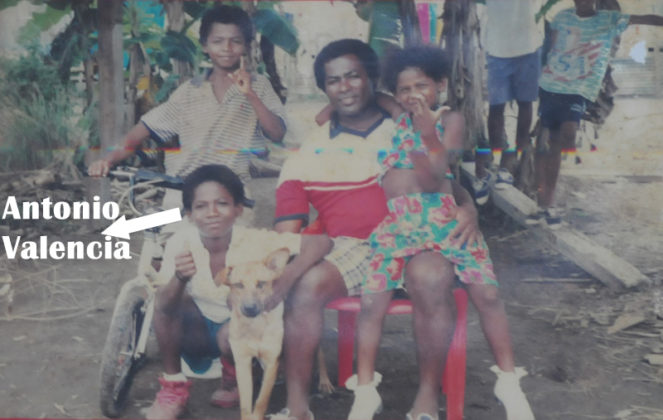 As Antonio Valencia puts it;…

“My childhood was very happy. My dad worked hard and all of us did what we could to ensure there was food on our table”.

Luis Antonio senior had a bottle re-selling depository and his three sons helped him cover the entire city and surrounding villages in search of glass containers which were then sold in Quito. 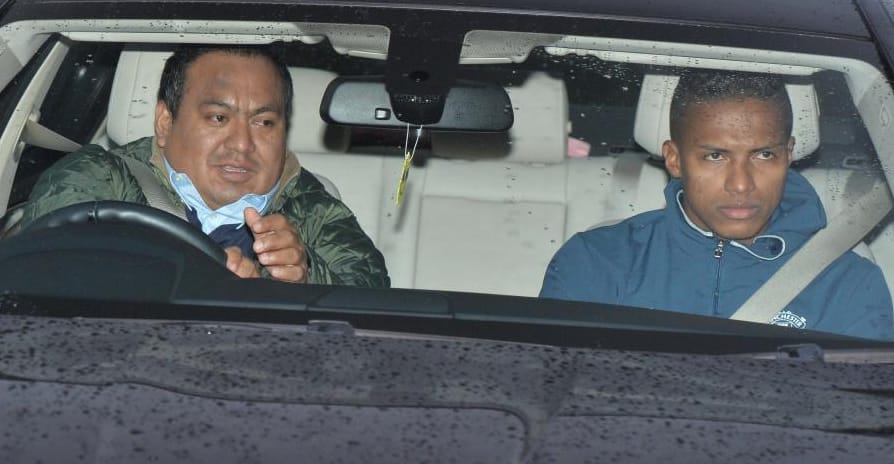 Valencia’s mother, Doña Teresa also had her own business; she sold very cold handbags of pure water, arazá juice and other refreshments close to their local football stadium.

Back then, her products help to combat the intense heat from football lovers who would clog her business to purchase her drinks.

When important football matches got finished, Antonio and his mother would rush to secure sales to football fans in a bid to make bigger profits. Below is a photo of Antonio Valencia’s mother and his sister. 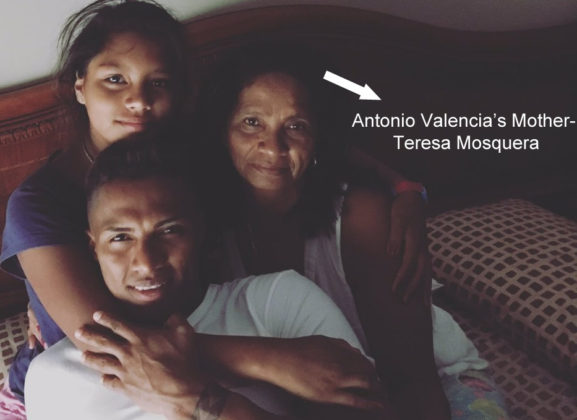 He also has a sister named Jazmina Valencia. He doesn’t have a blood relationship with Enner Valencia.

The United Legend has the following attribute to his personality. 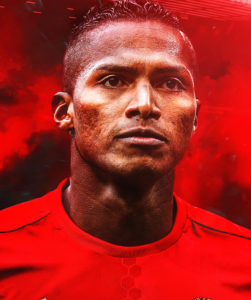 Antonio Valencia’s Strengths: He is Creative, passionate about his career, generous and warm-hearted.

Valencia Weaknesses: He could be arrogant, stubborn, self-centered, lazy and inflexible in relationships.

Antonio Valencia dislikes: Being ignored, facing difficult reality and not being treated like a king.

In summary, Valencia is a natural-born leader. He is someone who is able to achieve anything he wants by committing totally to it. Finally, he possesses a specific strength and a “king of the jungle” status.

He may be teased for rarely smiling on the pitch but former team-mate Juan Carlos Burbano claims it is all a facade.

“That face you sometimes see on him is that being annoyed on the outside?” he says. “On the inside, he is a sweet, kind man with a big heart but that lion that you can see in his face, he always puts him to work for the team on the pitch.”

FACT CHECK: Thanks for reading our Antonio Valencia Childhood Story plus untold biography facts. At LifeBogger, we strive for accuracy and fairness. If you see something that doesn’t look right in this article, please place your comment or contact us!.