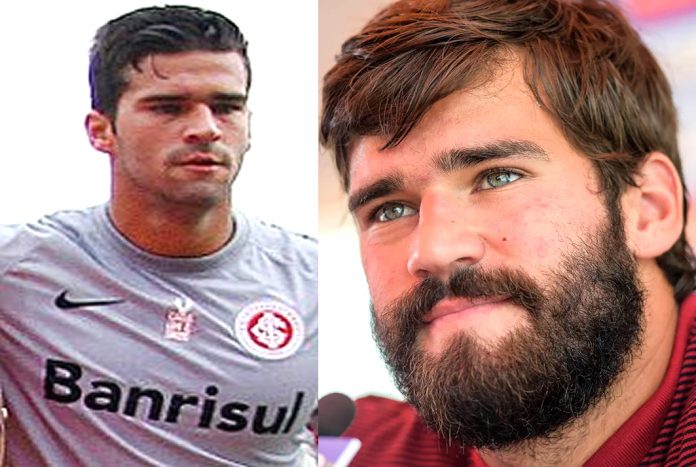 Lifebogger presents a Full Story of a Brazilian best known by the nickname “The Messi of Goalkeepers“.

Our Alisson Becker Childhood Story Plus Untold Biography Facts bring to you a full account of notable events from his childhood time to date.

The analysis involves his life story before fame, family background, relationship life, and other OFF-Pitch facts (little known) about him.

Yes, everyone knows he is a Brazilian Goalkeeper with class. However, only a few consider Alison Becker’s Biography, which is quite interesting. Now without further ado, let’s Begin.

For Biography starters, the Liverpool Legend was born on the 2nd day of October 1992 to his mother, Magali Lino de Souza Becker and father, José Agostinho Becker (a real estate broker) in the state of Rio Grande do Sul, Brazil.

Together with his elder brother Muriel, Alisson and the entire membership of his extended family household were born to the Catholic faith of Christianity.

Having known the importance of football in Brazil, Alisson Becker’s parents had an early interest in getting their boys involved in the game.

Both Alisson and his elder brother, Muriel Gustavo, who is six years older, choose the part of becoming goalkeepers early on in their careers.

For Alisson Becker’s parents, the Academy of Brazilian Sports Club Internacional was the best place for both boys to kick-start their careers. This is a club that once boasts of players like Otávio Monteiro – the Brazilian-born Portuguese footballer.

Muriel (pictured below), who was six years older, ended the last phase of his youth career, which spanned from 2003 to 2006.

Alisson came onboard five years later, in the year 2008. Both parents to date never cease to talk about the feeling of cheering for their children.

This happened at a time when Allison, who graduated from the club’s academy, started to compete with his elder brother for the first-choice goalkeeping role.

Dona Magali Lino de Souza Becker, their mother in an interview, recently admitted that it was difficult seeing their two sons compete for the position of the starting lineup. In her words;

That was very difficult. You want to see both of them get into the starting lineup?

And how is that possible? Magali asks. 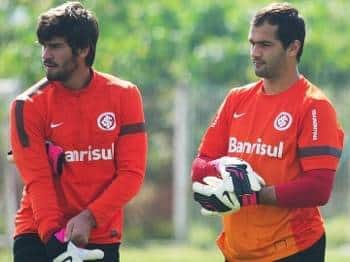 Among the brothers, it was Becker who possessed a more steely determination to make his dreams come true.

He won the competition for the first spot after his brother took an injury that temporarily forced him off the team for a while.

Upon Muriel’s return from injury, Alisson had gotten a meteoric rise, thus becoming irreplaceable. This led to Muriel taking the loan option in 2009 after a year’s battle with his little brother.

Seeing their son compete and finally coming to terms was something neither Magali nor her husband, José Agostinho Becker, could predict about their children’s rivalry.

However, there was massive support for both, who later became happy for each other. 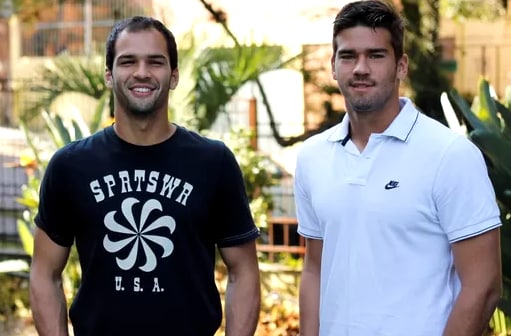 Few weeks after he left the club on loan, Muriel opened up to the media, saying;

I know how it feels losing my position. But am glad it was my little brother who took it from me.

As time went on, Alisson’s ambitions to become noticeable by European scouts became not a passing fancy but a reality achievable through hard work.

He knew goalkeeping was a more difficult trade for European scouts to bank on. Despite the thought, Alisson gave in his best.

It was the year 2012 when Dunga coached the club with an iron fist, and there was serious doubt about players and goalkeepers retaining their spots due to stiff competition. 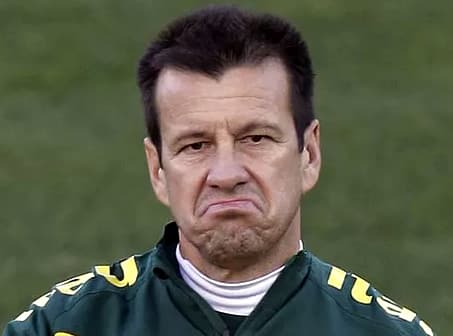 Alisson Becker’s rise to greatness came when he challenged legendary Brazilian former goalkeeper Dida, who came to the club to compete with him but ended up in shock seeing a young Alisson Becker forcing in into full retirement from football in the year 2015.

After forcing Dida into retirement, Alisson began to get so much fame, which was followed by lots of interest from European scouts.

His ability to deal with fame was directly proportional to his ability to stretch his dive, thus keeping all balls away from the net. 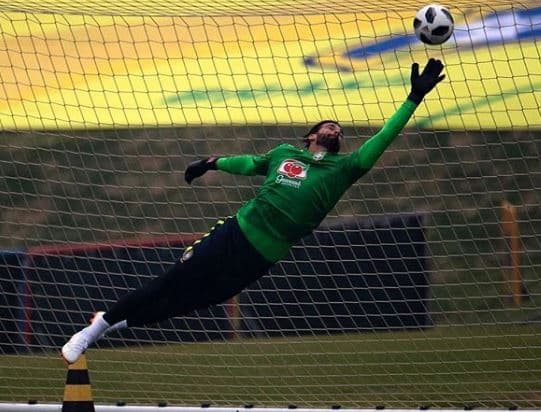 It was the Italian side Roma who finally won the race to sign Alisson Becker. While at Roma, Alisson reportedly got frustrated due to his insufficient game time as he played second fiddle to Wojciech Szczesny. 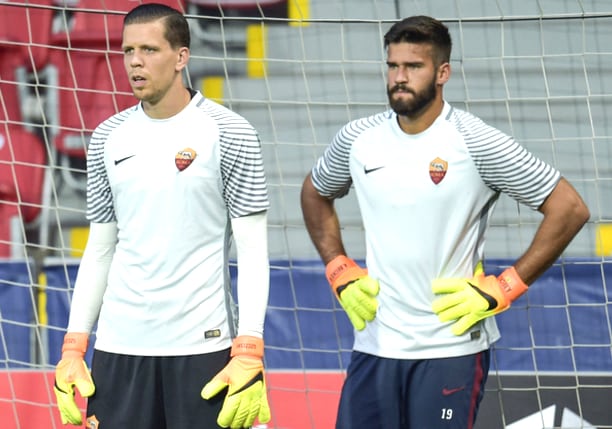 Leaning on past experience, Alisson had to walk his way out to displace Szczesny, who gave up his starting spot and was forced to leave the club for Juventus to, who needed a backup replacement for aged Gianluigi Buffon.

After Loris Karius of Liverpool had a woeful 2017/2018 Champions League final nightmare, Liverpool began their search for a new goalkeeper.

Alisson Becker was the only person needed to trustfully replace the club’s floppy goalkeepers.

On 19 July 2018, at the age of 25, Alisson Becker was officially confirmed to be a Liverpool goalkeeper. 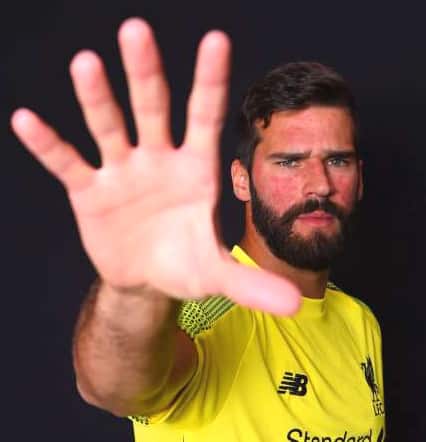 At the age of 25 which his hands portray, Alisson became the most expensive goalkeeper of all time.

Alison, at the time of writing, is Liverpool’s first-choice goalkeeper – just above Caoimhin Kelleher. The rest, as they say, is now history.

Behind every great Brazilian footballer, there’s a great woman, so the saying goes.

In this case, behind a successful Alisson Becker, there was once a glamorous girlfriend. She is named Natalia Loewe. This lady later became his wife. 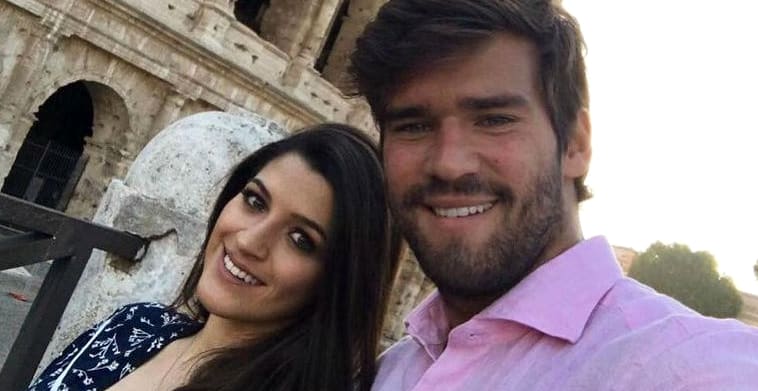 Without a doubt, Alisson Becker’s lifestyle off the pitch builds up a complete picture of him. According to a source, Alisson has known his wife Natalia Loewe since his teenage while in high school.

While Alisson focused on football, Natalia saw herself through school. She became a medical doctor, as evidence revealed below. 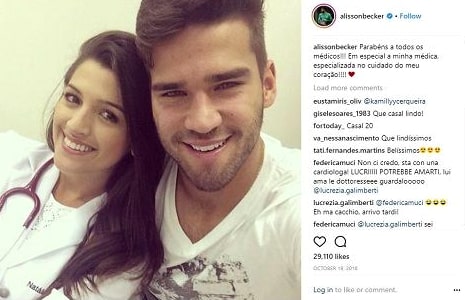 According to media sources, both lovers started dating in 2012, the year Alisson ended his youth career with Internacional.

“Congratulations to us, my love !!

The photo speaks for itself.

but I want to tell you that I love you very much, and I’m very happy by your side !! 4 years.”

See for yourself below; 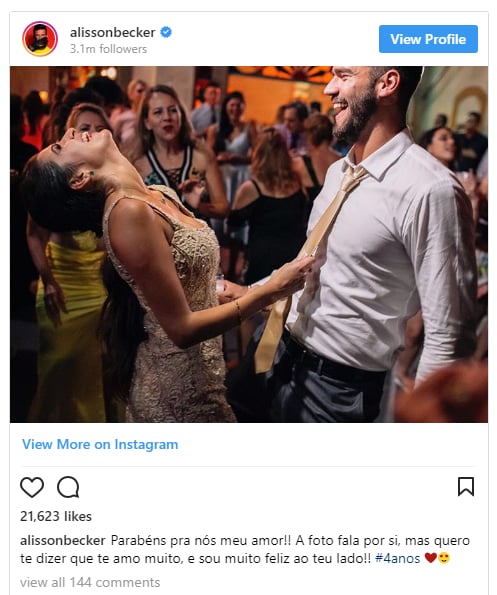 The photo above was shot a year after both had their private wedding, which happened in 2015. The couple together have a baby girl named Helena who was born in 2016. 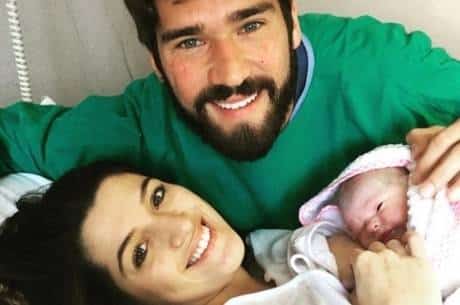 Alisson has proven, times without numbers, how a wonderful husband and father he is. He was here for his beloved wife while she was putting to birth. We also know the Brazilian goalkeeper to be very fond of his little Helena. 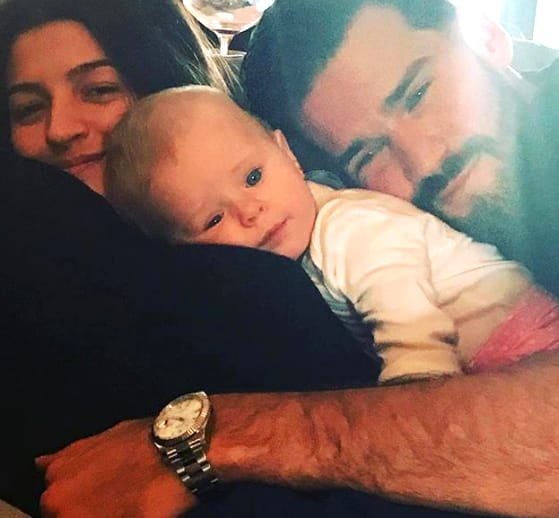 Helena his daughter, is a great inspiration for Becker who is used to posting trending photos of her. Below is one of which shows him about to toss her into the air. 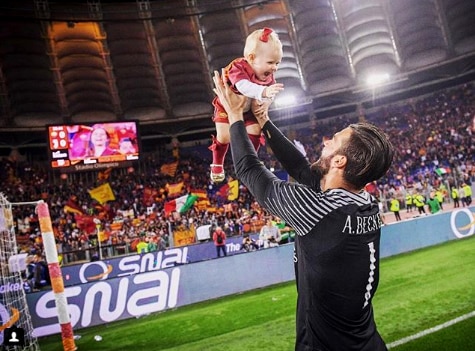 Birthdays are special occasions that call for a celebration for the Becker family. Below is a photo of the lovely parent celebrating Helena’s first birthday. 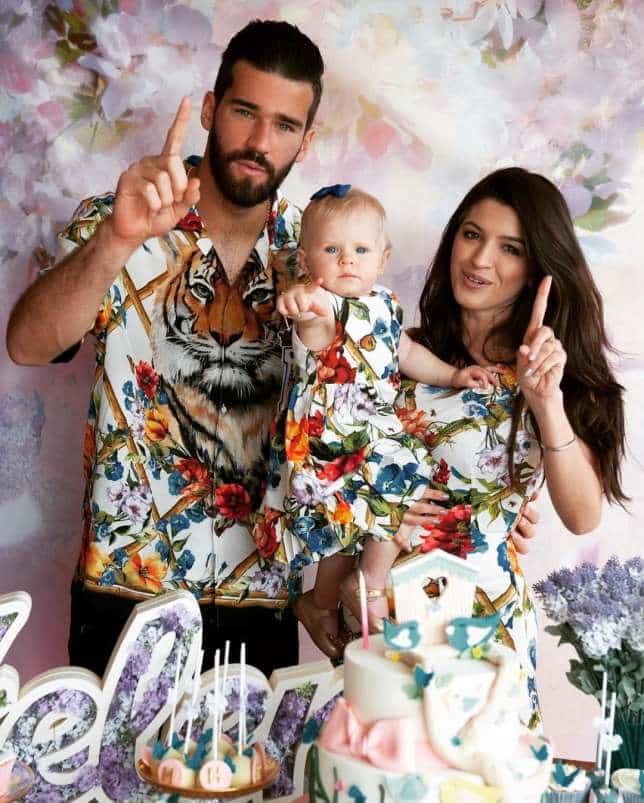 For Alison, it’s all about his performances and showcasing to fans his personal conquests.

Once you have seen his looks above, then you can’t unsee it. Alisson Becker’s picture above looks very much like Jesus Christ. 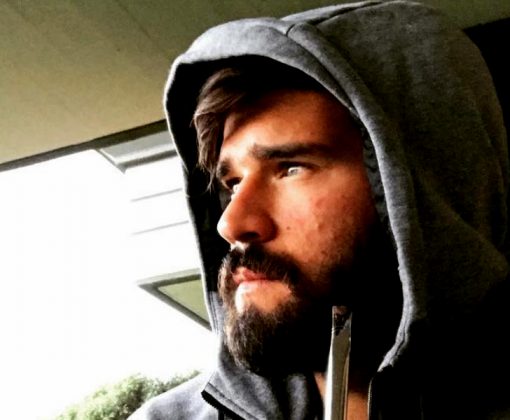 Asides from his wife and kid, Alisson’s dog is the only thing on earth that loves him more than he loves himself. 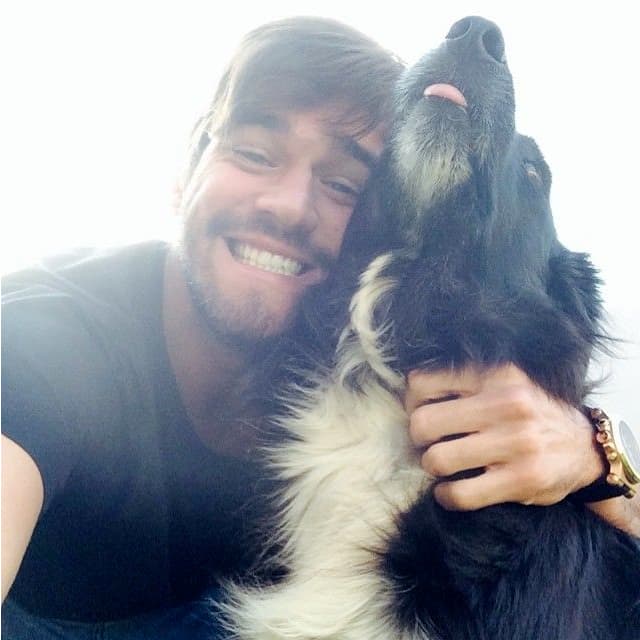 FACT CHECK: Thanks for reading our Alison Becker Childhood Story plus untold biography facts. At LifeBogger, we strive for accuracy and fairness. If you see something that doesn’t look right in this article, please place your comment or contact us!.