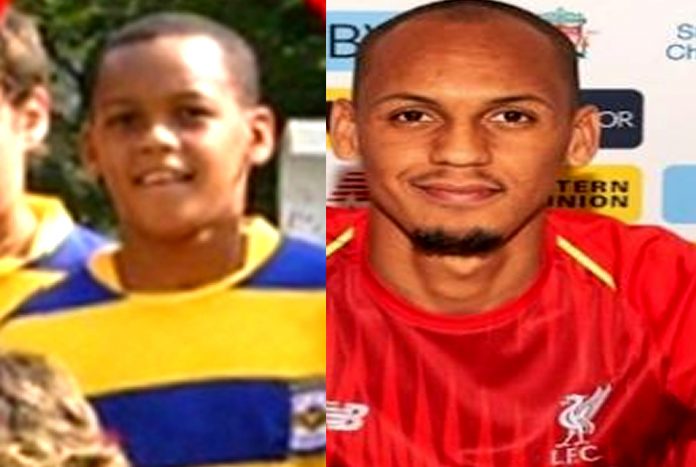 LifeBogger presents the Story of a Football Genius best known by the nickname “Mr Reliable“.

Our Fabinho Childhood Story plus Untold Biography Facts brings you a full account of notable events from his childhood time to date.

Yes, everyone knows he is a reliable midfielder. However, only a few have read Fabinho’s Biography, which is quite interesting. Now without further ado, let’s begin.

For Biography starters, there exists no Fabinho in the names given to him by his parents. Hence, his full name is Fábio Henrique Tavares.

Fabinho or Mr Reliable as he is known, was born on the 23rd Day of October 1993 to a dark Brazilian mother, Rosangela Tavares (a former cleaner) and a white Brazilian father, João Roberto Tavares (factory worker) in Campinas, São Paulo, Brazil.

Pictured below are his lovely parents.

Fabinho was born a shy child and the youngest of three children. As the last-born child of the Tavares family, Fabinho was very pampered.

He grew up with elder siblings in the beautiful Brazilian city of Campinas, which is known for its grass fields and unique landscape, which favoured playing football.

More so, emptiness ended for them, including Fabinho, when there was football on their feet. 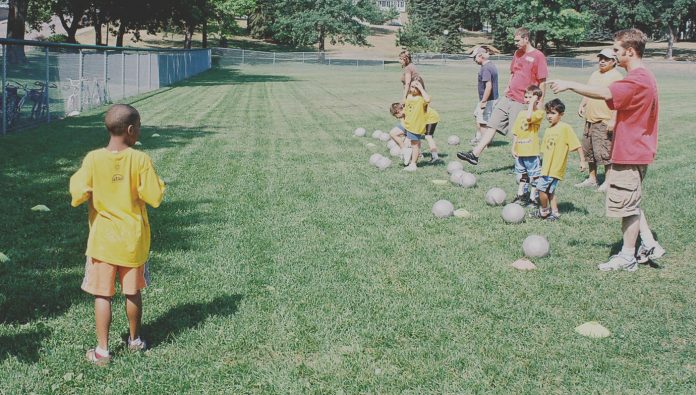 Superstar Fabinho started playing competitive football in school at the age of 7. After school, he played football with his local youth team, Paulínia FC. Pictured below is a young Fabinho with his teammates.

Fabinho was observed to possess a steely determination early on. This was emphasized when Paulínia coach Erick Martins pointed out his dedication, commitment, discipline and tactical determinations.

Even his parents, notably his father Roberto, assure that, from an early age, his son prioritizes football.

Both in school and in his local youth club, everyone said that he had talent, he always had a strong kick and the skill of a versatile player.

Soon after, Fabinho started to practice futsal football, which he did till the age of 12 before considering going more professional. His first professional trial was with the Fluminense youth system.

Fabinho’s passion for football saw him after a successful trial, enrol on the roster of a Fluminense local youth team, which gave him the stage to further showcase his talents.

At the youth club, Fabinho had an encounter with Marcelo, who was on the club’s youth senior side. Among other Brazilians was Richarlison, who was his junior. 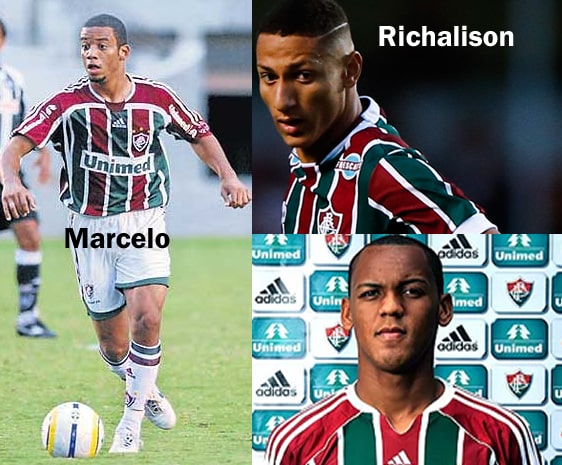 After spending his youth years, rising above all youth ranks at the club Fabinho got called to the first team on the 20th of May 2012.

Because he was very good, Fabinho barely featured in Brazil before departing for Europe to play for Rio Ave in Portugal. On his account of his call to play in Europe, his father said;

“God finally blessed his effort and put a good youth club in his path.

my son has talent, he worked hard for the dream of being a football player and he is reaping the fruits”

“When he heard him talking to his father after he got a call to Europe.

I saw it was so special to him and we his family. He was very happy, touched and full of tears”

While playing with Rio Ave in Portugal, Fabinho met the legendary football agent, Jorge Mendes who became his agent and career advisor. 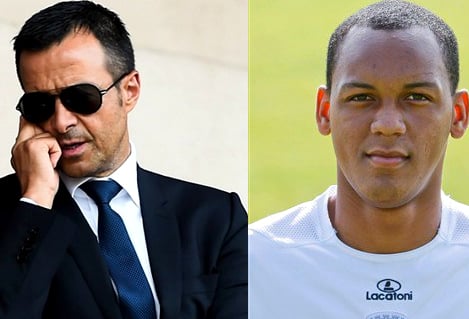 Mendes is known to be responsible for helping mostly Portuguese-speaking players like C Ronaldo, Jose Mourinho etc make progress at the biggest clubs.

The Smart Agent Decision: Despite being a senior player, Fabinho was given a piece of professional advice by his super agent to join Real Madrid Castilla (Real Madrid team B), which he envisages will act as a better springboard to uplift his career.

More importantly, he factored in his client Jose Mourinho who managed Real Madrid’s senior side, hoping he would help Fabinho fuse into the Madrid senior team. 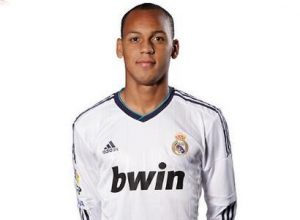 Fabinho obeyed Jorge Mendes‘ wish to join the Castilla development squad. He rose above the Madrid junior ranks and made his way into the Madrid first team, where his plans failed because Jose Mourinho got sacked that period. 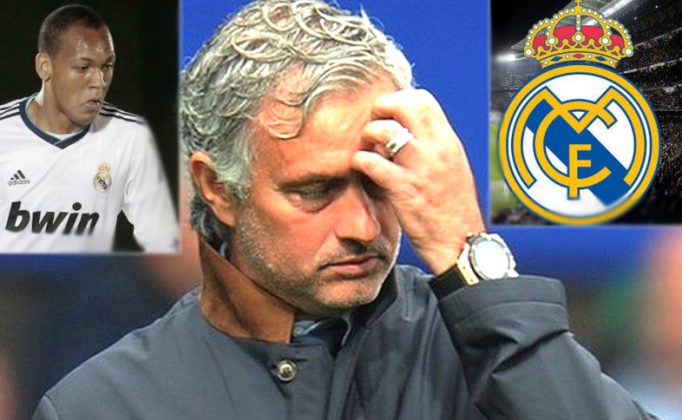 Fabinho’s only appearance for Real Madrid came against Malaga when he provided Angel Di Maria with an assist which led to the game’s winning goal.

Jose Mourinho, who was on the verge of being sacked, never gave Fabinho the chance he wanted.

Knowing his client Jose Mourinho would leave the Spanish club made Jorge Mendes agree to a Loan decision to Monaco, which later became a permanent deal.

At Monaco, Fabinho possessed a steely determination to make his dreams come true, and his ambitions to become the very best in his position weren’t a passing fancy.

At the club, he modelled himself into a fine defensive midfielder which saw clubs among Mourinho’s Manchester United fighting for his acquisition.

He rejected Mourinho‘s United and went to Liverpool. The rest, as they say, is now history.

Behind every successful Brazilian footballer, there’s a great woman, or so the saying goes. Behind Fabinho, there has been a glamorous girlfriend who is presently his wife. Rebeca Tavares, pictured with the love of her life below, is the wife of Fabinho.

Fabinho and his ever glamorous wife Rebeca Tavares. Rebeca married Fabinho in 2015 after they first got together in 2013. Both lovers enjoy the ability to express their love and find time to spend together.

As observed from close friends and family sources, their relationship took them from best friends status to true love.

Fabinho considers it an honour to take his woman anywhere she wants to go shop. For Fabinho, shopping is just shopping.

His “we go we buy we leave” shopping lifestyle is not the case with Rebeca. For Rebeca, there’s a store or two that actually means something to her.

According to her Instagram, Rebeca leads a glamorous life with Fabinho. She likes to post many shots from exotic holidays with her man. This is that of New York.

Rebeca’s beautiful brunette is passionate about fashion, and Alicia Keys is her idol. She loves her man taking her to places with beautiful skyscrapers, as seen in the photo below. 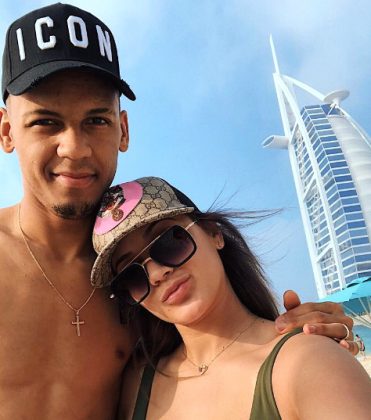 Spending holidays in the Arabian desert has a special little place in her heart thanks to its solitude and the beauty of nature. The desert is full of a variety of activities for both lovers who love to adventure. 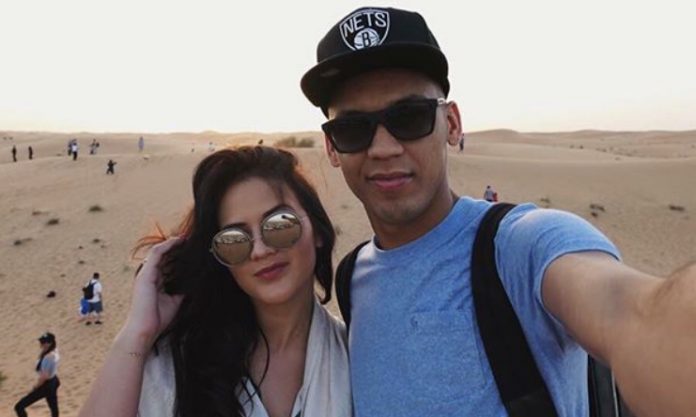 Valentine’s Day is more than just a celebration for couples who love to showcase how much they love each other. 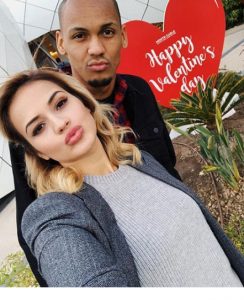 His wife, Rebeca Tavares, has once said she would be taking a more hands-on approach to interacting with the legions of Liverpool fans on Twitter who are eager to interact with the Brazilian.

She also went public to explain her husband’s social media ignorance in her own account. In her words;…

“And yes, this is my Twitter. Fabinho doesn’t follow me yet because he doesn’t know how Twitter works so he has someone who helps him with that and maybe that person doesn’t know I’m his wife.” 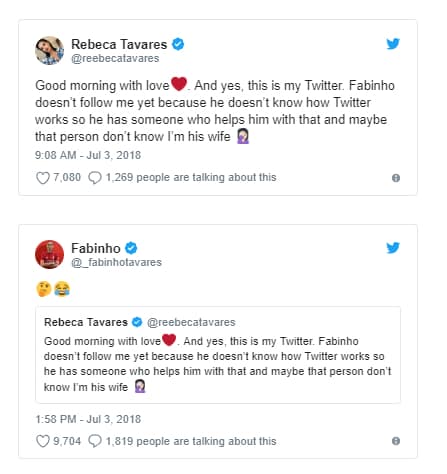 Fabinho as at the time of writing, currently has 94.4k followers who can’t see him tweet by himself. According to the Brazilian…

“I have [had] twitter two or three ago but I only used it to see hashtags or news. but I think Twitter is better than Instagram as regards interacting with fans. Personally, I prefer Instagram.”

Fabinho comes from a football-loving family background. Presently in England, Fabinho currently lives with his sister and brother-in-law who take care of his football affairs.

His dream is to have his whole family nearby. However, his parents; João Roberto (father) and Rosângela (mother) love to stay in Campinas, Brazil.

According to his mum;

“I’m more relaxed that my daughter is there with him. We go every year and spend about three months with him before going back to Brazil.”

When Fabinho’s parents come visiting, his home gets full of fun and happiness. Fabinho loves to eat Meat Lasagna prepared specially by his mum. 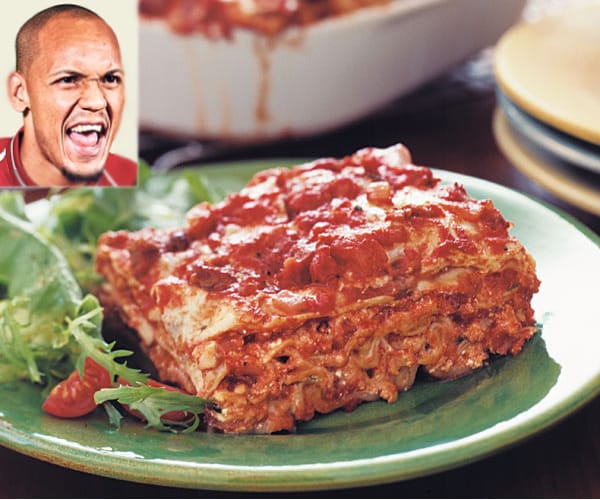 When she comes to England,  Rosângela always takes a lot of Brazilian food and does not stop preparing rice, beans and steak for her last born child and breadwinner of the Tavares family. 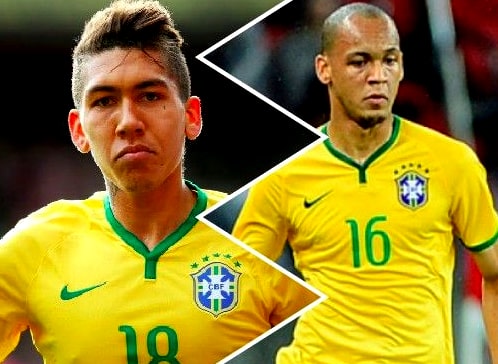 Roberto Firmino has gained the nickname ‘Agent Bobby‘ in acknowledgement of his subtle efforts in persuading the potential transfer of his Brazilian compatriot Fabinho from Monaco to Liverpool. According to Firmino,…

“Fabinho spoke to me when we played at the national team. Later on, he had a good chat with me about Liverpool and immediately, I pressed buttons”

Firmino is responsible for explaining to Fabinho, the way of life in Liverpool, the best areas to live in, how the club worked, how the people in the area are.

Most importantly, he helped Fabinho on how to get a house to buy. To many fans, Firmino is the next Jorgie Mendes.

FACT CHECK: Thanks for reading our Fabinho Childhood Story, plus untold biography facts. At LifeBogger, we strive for accuracy and fairness. If you see something that doesn’t look right in this article, please place your comment or contact us!