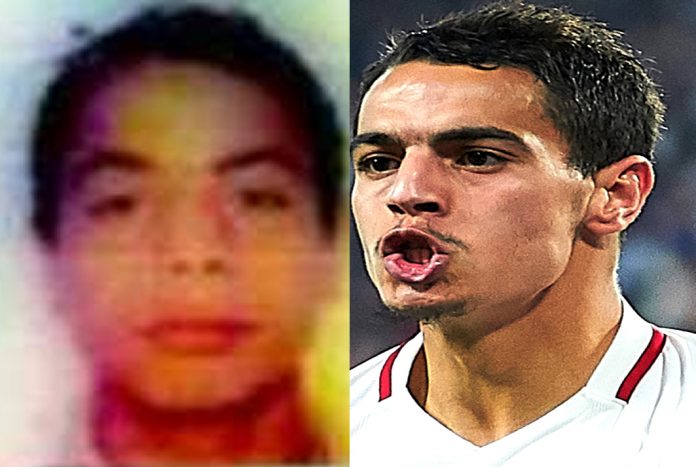 LB presents the Full Story of a Football Genius with the nickname “BenyeGOAL“. Our Wissam Ben Yedder Childhood Story Plus Untold Biography Facts brings you a full account of notable events from his childhood time to date.

Yes, everyone knows he is a prolific striker who is supremely-talented with an eye for goal. However, only a few consider Wissam Ben Yedder’s biography which is quite interesting. Now without further ado, let’s begin.

Wissam Ben Yedder was born on the 12th of August 1990 in Sarcelles, France to Tunisian parents. The French national with Tunisian family roots was born as the fourth child out of six children to his lovely parents pictured below.

Wissam Ben Yedder grew up in the French’s Sarcelles district alongside his childhood friend and fellow footballer Riyad Mahrez. Back then, his neighbourhood Sarcelles, a commune in the northern suburbs of Paris was known to have series of violence of which people from African migrant family suffered most.

Ben Yedder’s early life saw him overcoming a tough upbringing in one of the toughest neighbourhoods around the French capital. Due to repeated violence, his parents out of fear was forced to move their family to nearby Garges-les-Gonesse. While at Garges-les-Gonesse, Ben Yedder took up playing Football as a source of solace away from his troubled realities.

Ever since he first started kicking a soccer ball at Garges-les-Gonesse, Wissam Ben Yedder had the same dream as thousands of other kid growing up in Garges-les-Gonesse – to play professional football. From a very early age, football occupied his mind.

“Sometimes at eight o’clock in the morning, when we didn’t have to go to school, he’d wake me up to tell me to come and play against him,”

Daniel Mendy, one of Ben Yedder’s childhood friends told SoFoot magazine. Little Ben Yedder would play the game in the rain and snow, an act which was not always with the approval of his parents. His parents who would most times complain that he was endangering his health and also on his lateness in coming home after playing football (UEFA reports).

Rather than playing with children in his own age, Ben Yedder was always looking to play at a higher level in order to test himself. One of the deepest memories he has a child was when the older boys asked him to play with them saying:

‘Hey, we want JUST you to come play on our team.’

This gave little Ben Yedder an immense amount of pride and the desire to do what he does best. However, it took no time before he made the decision to begin a career.

Thou not many fans know this, Ben Yedder’s love of the game which had no limits saw him joining a variant form of football called “Futsal“- This is a kind of football activity played on a hard court, smaller than the actual football pitch, and mainly indoors. Below is a piece of evidence Ben Yedder’s Futsal ID in his early days.

Ben Yedder was quick to make an impression with the club thanks to his skills which was perfectly suited to the indoor game. Speaking of skills, Ben Yedder possessed that faultless first touch, technical dexterity, a low centre of gravity and ability to finish.

Ben Yedder grew in the game and for many years helped his Futsal teammates in winning football tournaments between the estates. Below is a piece of video evidence of his Futsal days. Credit to C-Foot.

Judging from the video above, you could easily conclude that Ben Yedder’s participation in Futsal is the reason why he knows how to shoot confidently with both feet. Ben Yedder continued having fun with futsal at Gymnase Allende Neruda in Garges-les-Gonesse up till his mid-teen years.

Very very few people on this earth like YOURSELF who is reading this article can claim to have seen Wissam Ben Yedder having fun on a field of futsal.

Just few years after the new millennium, Ben Yedder began to have a rethink whether to continue with Futsal or make a switch to football.
It took until 2006 before Ben Yedder realize Football and NOT futsal was his calling. Seeing the French team progressing to the finals of the 2006 World Cup made Wissam Ben Yedder have that total change of mind.

In the year 2007, Wissam Ben Yedder decided to move to Saint-Denis where he devoted himself only to football on grass, a decision which finally paid off. At Saint-Denis, Ben Yedder horned his skills earning a senior career call-up.

Having earned a wealth of experience during his time with Futsas, it was easy for Ben Yedder to break into senior football. This happened with another club, UJA Alfortville which at that time played in France’s amateur fourth tier.

After scoring goals upon goals, Ben Yedder became a subject of transfer for top French clubs. The most memorable day of his career came when he performed a miracle to the eyes of an admirer. Now let’s tell you the story.

One blessed day, Michel Moulin, a former sporting advisor at PSG who had strong links to the French top tier club, Toulouse instantly fell under the goal-scoring spell of Ben Yedder. He once said giving the account of his story;

“I was told about a young player who was a phenomenon, so I willingly went to see him play. I gave this little guy a trial and after 15 minutes I said, ‘Lille has brought for themselves a Maradona'”

Moulin told RMC Sport. Moulin unsuccessfully offered Ben Yedder to Lille before he got snatched by Toulouse thanks to a phone call from Toulouse president Olivier Sadran.

Fast forward to his prime, since leaving the Parisian suburbs, the Sevilla forward’s career has gone from strength to strength.

Coming on as a substitute and scoring a brilliant 2 goals against Manchester United in the Champions League on March 13 2018 gave Ben Yedder an instant global recognition. This feat led to a French football callup and also made top European club begging at their knees for his signature among whom Man United. The rest, as they say, is now history.

With his rise to prominence, there is no denying the fact that football fans have asked if he has a girlfriend, who Wassam Ben Yedder’s Wife is or any inquiries about his relationship life.

Well, as at the time of writing, there isn’t any strong female presence in Wissam Ben Yedder’s social media posts–other than a photo with a mysterious blonde who from all indications sure happens to be his wife (Fabwags report).

Judging from the date the photo was published on social media, it appears that both lovers have been together since after June 2017.

Getting to know info about Wissam Ben Yedder’s personal life would help you get a complete picture of him.

Starting off, Ben Yedder has a special moto in life and that is- “to keep smiling”. He believes in faith and self-belief even when things are not going well.

Soccer players, just like the rest of us, love their pets and Ben Yedder isn’t an exception. Even thou there is a saying that there is no loyalty left in the modern game, it surely doesn’t take into account the relationships shared between Wissam Ben Yedder and his pet Dolphine.

Still, on his personal life away from the pitch, Ben Yedder is a “Philippa” which is a name used to describe someone who is a lover of horses.

Wissam Ben Yedder’s success boils down to his upbringing at his family home and also, his Futsal education.

There is no dull moment with the Wissam Ben Yedder family members who usually have get-together sessions via holidays in Tunisia. His devotion to making sure his father, mother, brothers and sisters are comfortable is similar to his commitment to his career.

All members of Wissam Ben Yedder’s family appears to be devout Muslims by religious faith. However, some research has it that Ben Yedder is Jewish owing to his name “Ben“.

Wissam Ben Yedder without earns a healthy amount of salary from his professional career as a footballer.

Earning millions of Euros, however, DOESNT transcend into a glamorous dressing lifestyle just like C Ronaldo and Mario Balotelli. The millionaire footballer prefers to look simple or causal.

Judging from the photograph, it appears Wissam Ben Yedder has a taste for exotic cars BUT does not like to showcase it.

Ben Yedder has only showcased himself on Instagram beside a rented helicopter which he used during summer vacation.

In summary, Wissam Ben Yedder has prefered to live a healthy lifestyle.

Perhaps you’ve known Ben Yedder as someone who can shoot confidently with both feet, scoring goals. BUT you might not have learnt about the fact that he is also good in boxing, a hidden sport he sometimes devotes his time to.

Ben Yedder once broke his right foot as a teenager. After breaking the foot, he could not wait for recovery. He turned up for training with the lower half of his right leg in plaster.

Rather than watch his teammates play from the sidelines while he waits for a recovery, Ben Yedder boldly went onto hardcore training with his surviving left foot. When the cast at his right foot came off, he remained committed to using his left, seeing it as important as his right. This explains the reason why just like Pedro, he scores great goals using his left.

FACT CHECK: Thanks for reading our Wissam Ben Yedder Childhood Story plus Untold Biography Facts. At LifeBogger, we strive for accuracy and fairness. If you find something that doesn’t look right, please share with us by commenting below. We’ll always value and respect your ideas.