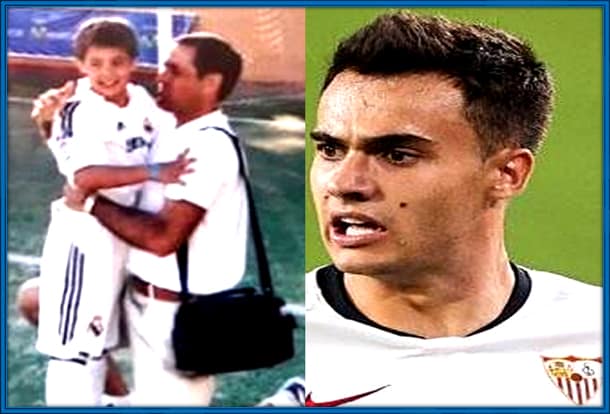 Our Sergio Reguilon’s Biography tells you Facts about his Childhood Story, Early Life, Parents – (Mr and Mrs Ildefonso), Family, (Marta Diaz), Girlfriend/Wife to be, Net Worth, Lifestyle and Personal Life.

In clear terms, we present you with a factual outline that reflects significant events in the Memoir of the Left-Back, beginning from his early days to when he became popular.

To whet your autobiography appetite, here is his childhood to adult gallery — a perfect intro of Sergio Reguilon’s Bio.

Yes, everyone knows he became one of the best left-back in LaLiga (2019/2020 season), especially following a superb loan spell at Sevilla.

However, few fans have read the complete version of Sergio Reguilon’s Life History, which is interesting. Now without further ado, let’s begin with the story of his early years.

For Biography starters, the Left-Back bears the nickname “Regui”. Sergio Reguilón Rodríguez was born on the 16th day of December 1996 to his parents Mr and Mrs Ildefonso, in the city of Madrid, Spain.

The footballer was born into his family as the second son, after a brother (Deigo).

Young “Regui” enjoyed his early years in Madrid, the capital and most populous city of Spain. As a boy, he got the childhood nickname “Ardilla”, which translates as Squirrel.

True to his nickname, little Reguilon had a thing for climbing streetlights, trees and anything that was “climbable”.

Although born in Madrid, the Left-Back doesn’t have his lineage from the Spanish capital.

After careful research, we realize that Sergio Reguilion’s parents have their family roots from Zamora. The Spanish City pictured below is 130 miles or 210 km from Madrid.

As Wikipedia points out, the Spaniard is the only notable Footballer whose ancestry is tied to the small city.

“Regui” as he was nicknamed during childhood, was a happy kid who has fun memories of his early days and household life.

The truth is, the defender is not a product of a broken home, and his parents’ preference for raising him in Madrid attests to the fact that his family was – at worst – middle-class citizens.

Hence, Sergio Reguilon’s parents are probably the type who could afford their son the basic things he needed in his early years.

The story of the then youngster’s first steps in soccer is not any different from kids who had dreams of playing the sport as professionals.

He was a staunch supporter of Real Madrid as a kid and began playing for local football club CF Collado Villalba as a 5-year-old.

While at Villalba, Sergio Reguilon learnt to tie his shoelace in addition to other basics of the sport.

He was small but precociously strong. In addition, Reguilon had strengths and techniques that were alien to his age group.

At the end of the 2005/2006 season, Reguilon was among the talents who became members of Real Madrid academy. Villalba gave him up and he spent several years in development with the club’s ranks.

Months after his 18 years birthday, the fast-rising defender went to UD Logrones (a Segunda Division B club) with a view to gaining more playtime. Sadly, he often sat on benches.

As a result, he went back to Real and began playing for the Los Blancos reserves (in the third division).

Reguilon once again went to UD Logrones In the next season and quickly became one of their regular XI. His goal tally for the campaign was 8 with a number of assists.

Returning to his parent club, “Regui” was extensively given playing opportunities by former coach Santiago Solari, racking up 30 appearances and serving as the B team captain for 11 times.

It wasn’t long before he was sent on loan to Sevilla where his contributions saw the club raise the 2019–20 UEFA Europa League trophy.

What’s more, his performances in the campaign did earn him votes as La Liga’s best left Back.

Fast forward to the time of writing this Bio, Sergio Reguilon like Eric Garcia, is sought after by major teams.

He has made a name for himself and it is left for Real to make known their plans for him in the future.

Like Ferran Torres, he is likely to get into a top-tier team in no time. The rest, as we say on Reguilon, is now history.

About Marta Diaz – Sergio Reguilon’s Girlfriend and Wife to be:

Away from loving what he does on the pitch, the left-back enjoys the companionship of a particular lady.

She is Sergio Reguilon’s Girlfriend, Marta Diaz. The lady is a YouTuber, and a beautiful one at that.

Browsing through the left back’s Instagram posts, it is evident that he went on vacation with his girlfriend to Dubai in August. It is evident that they share a strong bond and might possibly become husband and wife.

Family is the Athlete’s pillar of support. He cherishes them and has their best interests at heart. We bring you facts about Sergio Reguilon’s Parents.

Also, facts about his siblings and relatives will be laid bare to help you get a complete picture of him.

Great dads have produced successful footballers, and Mr Ildefonso isn’t an exception. Reguilon’s dad was instrumental to his rise in career football.

He was the type who never ceased to have an interest in the developments of his son’s professional life.

The defender loves them and once took to Instagram to celebrate his dad on the occasion of the fathers’ day celebration.

Like her husband, Mrs Ildefonso is also of Zamoran roots as Wikipedia confirms. Although there isn’t much documentation about the mother of Sergio Reguilon, however, we sure know that she was supportive in her own motherly way.

“Regui” has a brother, and his name is Diego. The sibling, as seen below, is bigger and seemingly older than the football genius.

Also, it appears Diego Reguilon didn’t toe the line of becoming a pro like his kid brother.

No doubt, Sergio Reguilon is the breadwinner of his family. More so, Diego should be proud of what his little brother has become.

Likeability is a word that encapsulates the best description for the footballer.

He is a friend to many who associate with him because of his hard work, humility and ability to relate well with people both on and off-pitch.

When the football genius is not training or stopping strikers, he can be found enjoying vacations, playing video games, and watching movies, among other interests and hobbies.

Sergio Reguilon’s Net Worth and Lifestyle:

The Spaniard is relatively new to top-flight football. This makes it too demanding to imagine his wealth is like those of other football greats.

In other words, the numbers that give a reflection of Sergio Reguilon’s net worth in 2020 are relatively low. To decipher it better, we’ve gone ahead to analyse his Sevilla salary breakdown.

Judging by our analysis and info from reputable sources, we can say Sergio Reguilon is worth just 2.5 Million Euros (as of 2020) and has sources of his wealth are his Salary and Wages.

Endorsements and Sponsorships are other sources of his wealth that help him comfortably sustain his luxurious lifestyle of driving exotic cars and living in a big house or apartment.

To wrap up our left-back’s Bio, here are Untold or little-known truths about him.

Salary in relation to the Average Spanish Citizen:

Did you know?… it will take an average Spaniard a whopping six years and one month to earn 172,000 euros, which is Sergio Reguilon’s monthly salary with Sevilla FC. Find below his earnings per second.

This is what Sergio Reguilon has earned since you began viewing this page.

According to Famous-Birthdays, Sergio Reguilon isn’t just a footballer but a pro gamer.

Around May 2019, the Left Back signed with the eSports squad Team Heretics, which is based in Spain. The team features prominent gamers such as Goorgo and TheGrefg.

The Happiest Day of his Teen Life:

Sergio Reguilon took a photo with Gareth Bale in the year 2014, a day he declared the happiest in his teenage life. See how small he was and how much he changed in just a few years when the duo took another shot. 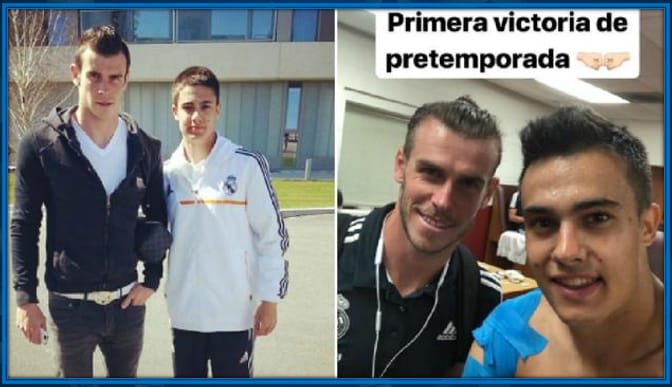 The left-back’s religion is still subject to debate at the time of writing. However, he was once seen taking photos close to a mosque during his recent vacation in Dubai. See the photo below.

Like fellow Defender, Achraf Hakimi, Sergio Reguilon has huge prospects on FIFA. The left-back’s overall FIFA 2020 rating is 80 points with a potential of 87 points.
Fans believe he deserves more rating than Luke Shaw whom Man United wants him to replace, as observed in the 2020/2021 transfer gossip.

Sergio Reguilon would have become a firefighter if he had never had intentions of becoming a professional footballer. He loves the service and sees firefighters as superheroes.
Thank goodness he was successful with soccer. We can’t imagine seeing him in firefighting apparel.

This table breaks down our content on Sergio Reguilon Biography.

Thanks for reading an in-depth Bio of Sergio Reguilon. We hope it has inspiringly made you believe that consistency is indispensable to achieving your goals.
As observed in our Memoir, Reguilon never lost form have strived to impress since his childhood days as a footballer.
At Lifebogger, we uphold consistency as our watchword in delivering football stories like that of Sergio. Kindly drop a comment below about your perception of the Spanish Footballer.