LifeBogger presents the Full Story of a Brazilian Legend who is best known by the Nickname; ‘The Bullet Man’.

Our version of Roberto Carlos’ Biography Facts, including his Childhood Story, brings to you his history – from his boyhood days. We then tell you how the Brazilian football Legend became successful.

The analysis of Roberto Carlos’ Bio involves his life story before fame, family life, relationship life and other OFF-Pitch little-known facts about him.

Yes, everyone knows about his speed and deadly left foot. However, not many soccer fans have read Roberto Carlos’ Biography, which is quite interesting. Now, without further ado, let’s Begin.

For Biography starters, his full names are Roberto Carlos da Silva Rocha. The soccer Legend was born on the 10th day of April 1973 in  Garça, São Paulo, Brazil. He was born to his mother, Vera Lucia da Silva and father, Oscar da Silva. Carlos grew up in a poor family.

Like many other Brazilian children, Roberto fell in love with football and played it whenever he had time.

He had already started working at the age of 12 in order to help his family. Carlos worked in a textile factory named Torsao Cardeiro.

His talent as a footballer shone through as he broke into Brazilian side Atletico Mineiro. A football club that later had stars like Fred, Diego Costa, Savinho, etc.

In 1992, despite playing at what was seen as a lesser club (União São João) and only being 19 years old, he was called up for the Brazil national team.

This marked the beginning of the energetic and turbulent nature of Brazilian football. The rest, as they say, is now history.

The Long-range shooter was initially married to Alexandra Pinheiro. Both separated after 12 years of marriage. After his separation, Carlos began the payment of alimony to former wife Alexandra Pinheiro.

In 2003 the couple signed an agreement in which the Carlos would pay about $ 36,000 per month of pension while Alexandra lived in Spain, where he played for Real Madrid until 2008. As she returned to Brazil in 2005, the value was reevaluated.

Roberto Carlos never stopped paying alimony to any of his children. He has always fulfilled all of his obligations as a father [medical covenants, school, clothing and food for his children].

Carlos despite paying, went on with his particular goal of reproducing with various women, which led him to have eight shots with “six or seven” different partners.

Roberto Carlos finally settled with Mariana Luccon, in 2009. Both became the best of friends and lovers. Roberto Carlos and Mariana Luccon got married that year. Following the marriage, he relocated to Brazil to continue his football. However, in October 2017, at age 44, he became a grandfather when his first daughter Giovanna gave birth to a son. Below is a photo of Roberto Carlos’s first daughter.

Every person has some attributes for which they are remembered. Roberto Carlos was remembered for more than just terrorizing the right-flank of the opponents; it was his bullet banana shots. He was nicknamed El Hombre Bala (“The Bullet Man”) due to his powerful bending banana free kicks, which have been measured at over 105 miles per hour (169 km/h).

This was a man who could shoot the ball at terrorizing speed that could put even a rocket to shame.

On 24 June 2005, Roberto Carlos was robbed by two gunmen while doing a live radio interview.

While the thieves harmed people at the radio station, they had compassion for Carlos due to the respect they have for the Brazilian legend. They only took his expensive watch and the interviewer’s cellular phone.

And this event happened back in 2005 when social media wasn’t as prominent as it is now and hence didn’t get much media coverage.

In March 2011, during a game away at Zenit Saint Petersburg, a banana was held near Carlos by one of the fans as the footballer was taking part in a flag-raising ceremony.

In June that same year, in a match away at Krylia Sovetov Samara, Roberto Carlos received a pass from the goalkeeper and was about to pass it when a banana was thrown at him.

Then what Roberto Carlos did became the subject of many praises. He picked up the banana, threw it by the sidelines and walked off the field right then and there—raising two fingers towards the stands, indicating the number of times he received racist remarks in Russia.

Brazil’s football legend, Roberto Carlos, has the following attributes attached to his personality. Roberto Carlos dislikes: Inactivity, delays, work that does not use one’s talents 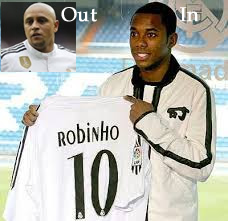 On 2 August 2005, he received dual Spanish and Brazilian citizenship. This proved important for Real Madrid, as it meant that he now counted himself as a European Union player.

Back then, the club allowed three slots for non-EU players and the action of Roberto enabled Real to sign fellow Brazilian star Robinho.

Roberto Carlos offered to play for Real Madrid for free after he left Fenerbahce. However, as Real had Marcelo, they didn’t call him back—and this turned out to be a blessing in disguise. Carlos then went to Russia to play for Anzhi Makachkala, where he was treated with the utmost respect by the club owner.

The owner of the club, Suleyman Kerimov, was such a big fan of his that he gifted him a Bugatti Veyron for his 38th birthday—which was five years ago on this day.

How quickly does time pass? Very quick in beauty, that’s for sure. Alfredo di Stefano is Real Madrid’s greatest player ever. He helped the team win 5 European Cups in a row and was the best player of his era.

He made many records for Real Madrid, some of which still stand to this very day.

Roberto Carlos, however, broke one of his record back in January 2006 when he played his 370th La Liga game as a Real Madrid player—making him the most capped foreign-born player in La Liga, a record that was held by Alfredo di Stefano before that.

World Cup-winning defender Roberto Carlos was recently sentenced to three months in prison in his native Brazil after failing to pay more than £15,000 in child support.

The former Real Madrid left-back is said to have owed 61,000 Real (£15,148) to former girlfriend Barbara Thurler, who is the mother of two of his children.

Roberto Carlos now claims he is in financial difficulty and offered to pay the sum in instalments, an offer which was rejected by the judge.

Carlos was quickly handed the prison sentence, though his lawyer claims the matter will be settled without him having to spend time behind bars. Could you imagine what would have happened had Carlos played in England? Well, it was once very close to being a reality.

When he scored his first international goal for Brazil at Goodison Park against Japan in 1993—a game which Brazil won 3-0—it caught the eyes of Birmingham scouts and they were interested in signing him.

Thanks for reading Our Roberto Carlos Childhood Story, plus untold biography facts. At LifeBogger, we strive for accuracy and fairness while delivering you the Biography of Classic Footballers.

If you see something that doesn’t look right in this article, please place your comment or contact us. Asides from Roberto Carlos’ Bio, we’ve got other interesting stories of Football Legends. The Story of Roger Milla, Paul Gascoigne and Adriano will interest you.