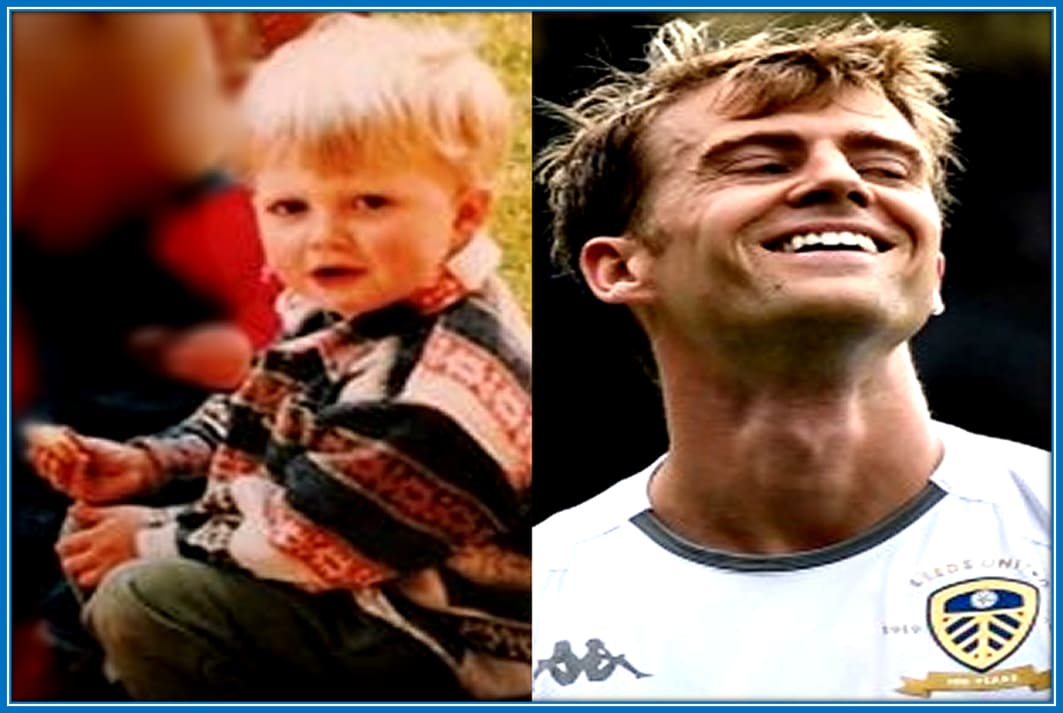 In a nutshell, we analyse the history of the Marcelo Bielsa inspired English professional footballer. Lifebogger begins from his early days, to when he became famous.

To give you a taste of the engaging nature of Patrick Bamford’s Bio, here is a pictorial summary of his life. From his childhood years to the moment he saw fame, Patrick has truly come a long way in life.

Yes, everyone knows the Leeds Forward and his club are proving doubters wrong. Along with Jack Harrison, he is blessed with technique, proficiency as well as ability on the ball.

However, only a few soccer enthusiasts know about his beginnings. Without further ado, let’s begin with his early years.

For Biography Starters, his nickname is “Pat.” Patrick James Bamford was born on the 5th day of September 1993 to his parents, Mr and Mrs Russell Bamford, at the market/industrial town of Grantham, England.

He is the first son among three children (including two girls) born out of the union between his Mum and Dad.

Young “Pat” grew up in the small village of Norwell, in Nottinghamshire, alongside two sisters Ciara and Orla.

As a boy, he was a fan of Nottingham FC and spent a great deal of time learning to play musical instruments.

Check out one of the earliest known childhood photos of Bamford alongside his immediate younger sister Ciara.

First and foremost, he is classified as one of those from a rich home. Patrick Bamford’s parents were upper-class citizens who ensured he had a private education and could play the violin in Grade 7.

Behold, a rare shot of Patrick Bamford with his well-to-do family.

We all know the forward is an English national. However, what you might not know is the fact that both of Patrick Bamford’s parents aren’t entirely of English origin.

Results of research to determine his ethnicity reveal he has Irish roots from his mum’s family.

Interestingly, the English man began playing football at a very young age. He was only 8 years when he became a part of Nottingham Forest’s youth system, a club that brought the best out of Brennan Johnson and Djed Spence.

Patrick Bamford’s parents were willing to support him and only demanded one thing – consistency.

“My Dad and Mum were picky about what they allow me to do.

Said the forward to Daily Mail. As observed, both his parents didn’t just allow him to play football but to also serve as a mascot for his boyhood club. Can you picture him?

Living up to his parent’s expectations, the football prodigy rose through Nottingham Forest ranks and made his first-team debut in 2011.

It wasn’t long before he joined Chelsea in 2012- a time he began looking forward to an exciting future with the blues. 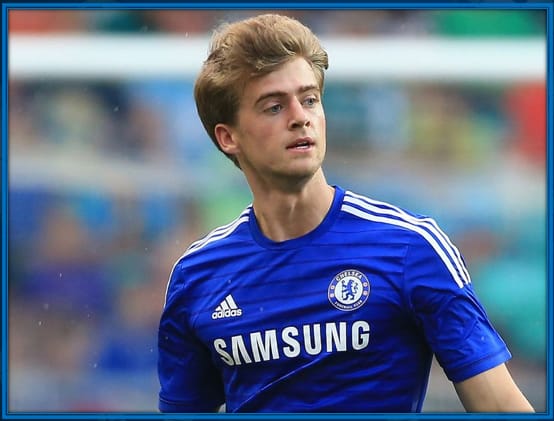 Needless to bore you with excessive details, the forward endured about seven loan spells in six seasons.

The first three clubs with which Bamford had his nomadic career include Milton Keynes, Dons, Derby County and Middlesbrough, where he won the Championship player of the year award.

The striker’s subsequent loans to Crystal Palace, Norwich City and Burnley were nothing to write home about. Notwithstanding, his return to Middlesbrough (on a non-loan transfer) was the beginning of his rise to fame.

Did you know that it was with the club that Bamford scored his first-ever Premier League goal? He did also help the club to the Semi-finals of the EFL Championship play-off after they suffered relegation.

When Bamford joined Leeds in 2018, little did many know that the future of the club was resting on his shoulders.

Games after games, he improved in form with a resultant increase in goals tally. He, alongside Pascal Struijk, Kalvin Phillips, etc., ultimately helped the sleeping giant return to the Premier League at the end of the 2019/2020 season. 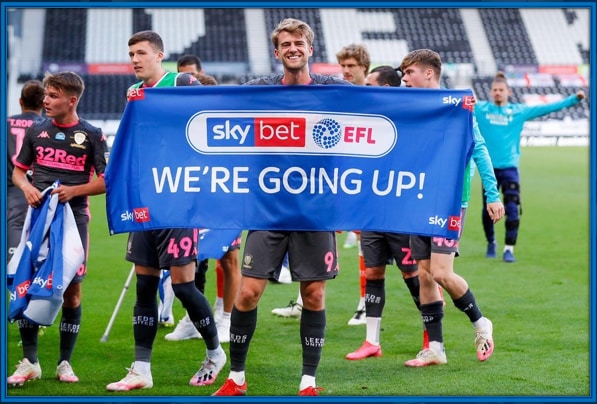 At the time Patrick Bamford’s Biography is being put up, he is still one of Leeds’ valuable assets.

No doubt, he looks forward to achieving more with the club under Marcelo Bielsa. Whichever direction things tilt for him, the rest, as we always say, will be history.

About Michaela – Patrick Bamford’s Wife to be:

At 27 years of age (2020 estimate), the forward is expected to be married or have a girlfriend. Bamford ticks the box of the latter expectation.

The name of Patrick Bamford’s Girlfriend is Michaela Ireland. Here, the lover boy has his medal and maybe, the ring too.

We know not much about when the duo met and began dating. Notwithstanding, we can confidently report that his girlfriend and wife to be (Michaela) is one of the influential persons in his life.

There are no doubts that they have genuine feelings for each other with grand plans for the future.

There are certain people who the striker can’t help mentioning whenever he tells his Biography story. It’s no other than his family.

Here, we bring you facts about Patrick Bamford’s parents and siblings. In addition, truths about his family roots will be outlined here.

The forward’s mom is from Ireland and has an Irish family. Bamford loves and credits his mother for pressuring him to do a part-time degree whenever he settles at any favourable club on a long-term basis.

Thanks to his mother, Bamford was eligible to represent Ireland at international events under the grandparent rule.

Russell Bamford is the Dad to the striker. He is popular with a few fans and sportswriters whom he grants interviews regarding developments in his son’s professional life.

Judging by the photo below, you’ll realize Russell does love to keep a close-knit family. 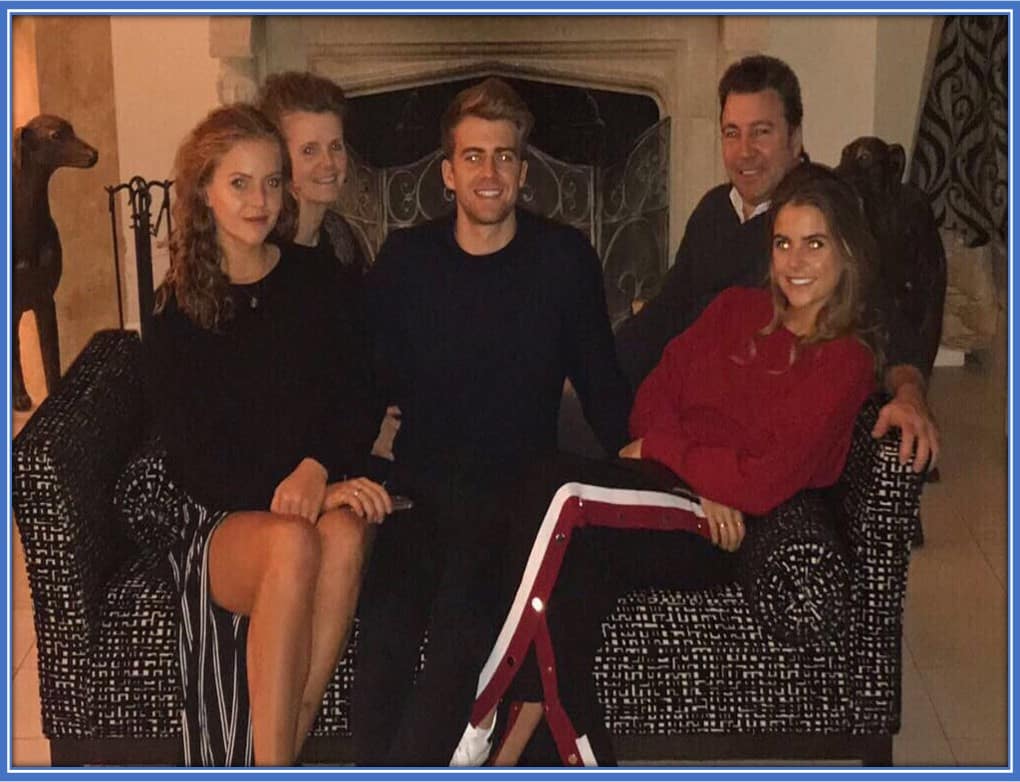 The striker has two sisters who are not only beautiful but intelligent as well. Bamford’s sisters’ names are Orla and Ciara. Anyone who looks at the trio might believe that they are triplets.

Both sisters must be very close to their only brother, who has brought fame to the family’s name. Behold the striker with his sisters- a graduating Orla (in the middle) and Ciara (to the right). 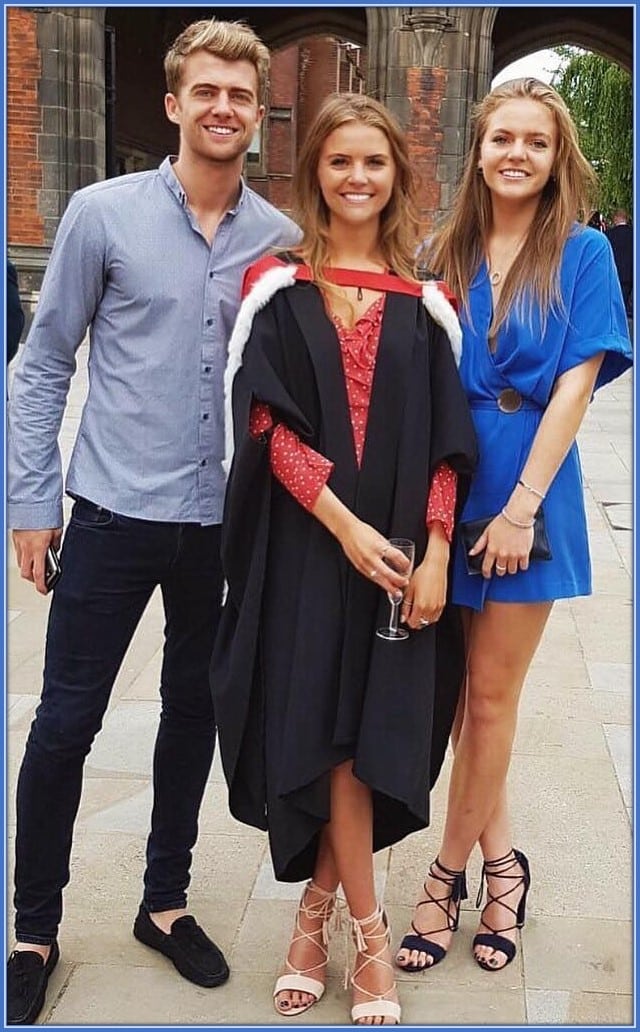 Moving on the striker’s immediate family life, there is a shroud of obscurity regarding his ancestry. Thus, there is no tangible information about his maternal and paternal grandparents.

Thou we know one side is English and the other, Irish. Again, neither have his uncles, aunts, cousins, nieces and nephews been identified.

Is Patrick Bamford related to JCB? the answer is YES! Lest we forget, one of Bamford’s distant relatives is JCB founder Anthony Bamford who is worth 4.6 billion USD. Without a doubt, the Striker has rich family members in high places.

Let us talk about Pat’s life outside football, especially as it relates to the content of his character. For starters, many consider him as a tactically intelligent and an uncommon sportsman.

Despite coming from a wealthy family, he is down to earth in his dealings with fellow sportsmen and fans. If not for football, the Biography of Patrick Bamford will be filled with blossoms of his music career.

Whenever Bamford isn’t on pitch or training, you can catch him playing either a violin, piano, guitar or saxophone. Isn’t he an excellent individual?

In the above, he was captured performing at the Rockliffe Park Training Complex. Also, he has a good command of German, French and Spanish.

Added to the list of his hobbies are vacationing, watching movies, and spending good time with family & friends. Here is one of the fun-filled ways which he enjoys his vacation. 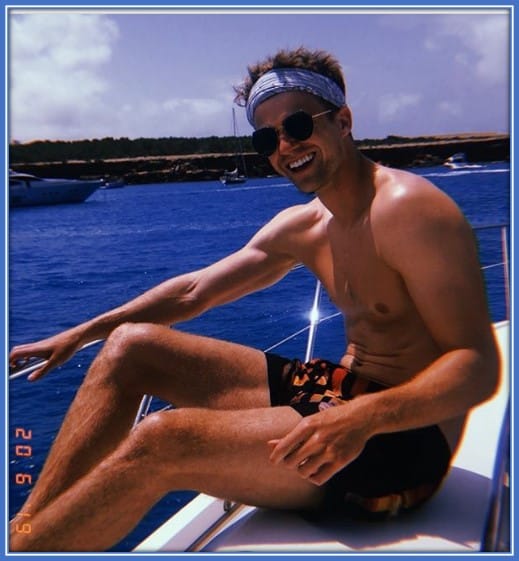 Regarding how the CF makes and spends his money, he has an estimated net worth of 15 Million Euros (2020 estimate).

It is not news that salary and wages are the major sources of his earnings. In fact, he ranks among Leeds’ highest-paid players with an annual salary of £1,820,000.

Pocketing such huge money means it could be difficult for Bamford to deny himself some of life’s luxuries.

Thus, it is not surprising that he drives a range rover and has other exotic cars cooling off in the garage of his London residence. 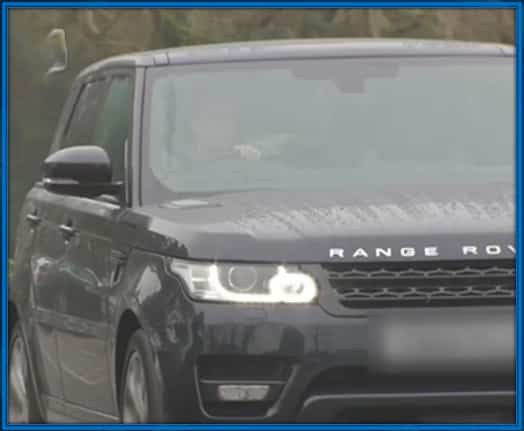 To wrap up this interesting piece on Patrick Bamford’s biography, here are little-known or Untold facts about him.

At the time you started viewing Patrick Bamford’s Bio, this is what he has earned.

A CoD Fan at Heart:

Bamford is reportedly a big fan of Call of the Duty video game. so addicted to video games. He is seen here doing a practice section before going on an international CoD live stream competition. 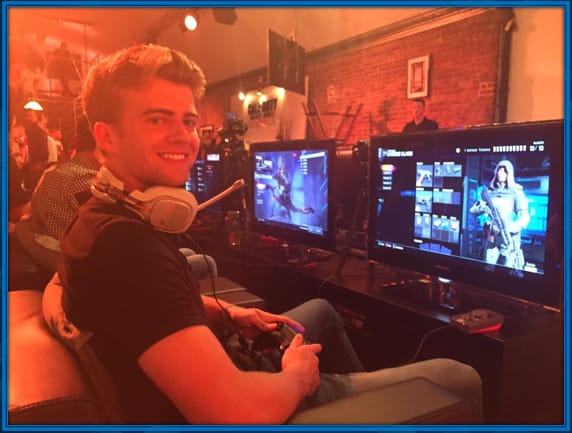 Bamford is yet to give clues whether he is an unbeliever or otherwise. But the odds are in favour of him being a believer who practices Christianity. Remember, Patrick is a Christian name.

Bamford has a poor FIFA 2020 rating of 72 points with a potential of 75. The ratings don’t just add up for a striker who helped Leeds gain promotion and has been on top of his game. What do you think about this injustice? Let us know in the comment box. 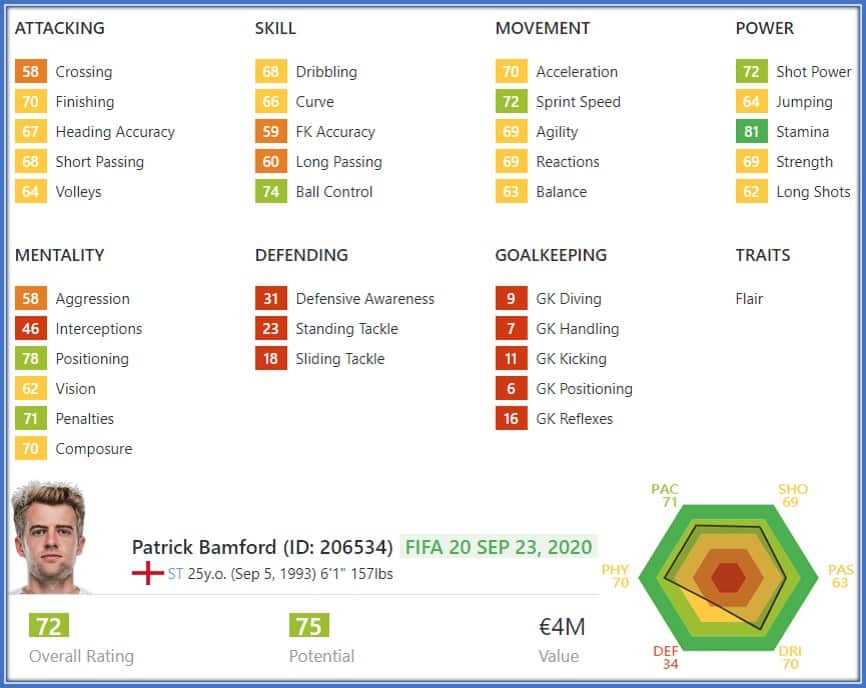 Bamford is a well-educated player. After his amazing GCSE and A level studies, he got a scholarship offer to study business at Harvard University.

The then football prodigy sacrificed the offer on the altar of pushing on with his career in England.

When it comes to keeping pets, Bamford will choose a dog over all other alternatives. The name of his dog is Duke. Who gives the title of Duke to a Dog? Bamford does. See the manner in which he lovingly held his dog, Duke. 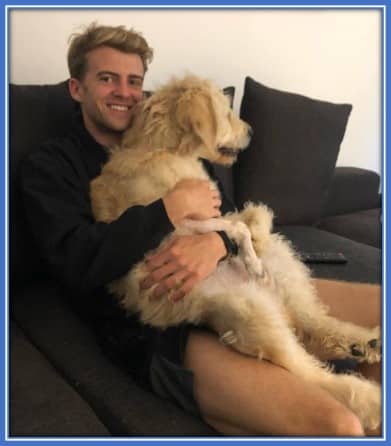 About his Birth Place:

Did you know?… the place Partick Bamford’s family hails from, Grantham, is known as the birthplace of former UK Prime Minister Margaret Thatcher.

To get a quick glimpse of Patrick Bamford’s Bio, here is a table for you.

Thanks for reading this insightful piece on Patrick Bamford’s Biography. We hope it has inspired you that a persevering spirit conquers all.

Fortunately, Bamford, like Kalvin Phillips, never lost faith in his capabilities despite failing to find his feet in 6 seasons of his loan spells.

Also, it behoves us to credit the striker’s parents for urging him to keep pushing, even when they could have easily asked him to try something else. Asides his mum and dad, Patrick Bamford’s family’s influence on his growth is also worthy of praise.

At LifeBogger, we pride ourselves on the consistent publish of Childhood Stories and Bio facts that are fair and balanced.

Did you spot anything that doesn’t look right in this article? Let us know in the comments section. Still, tell us what you think of Patrick.