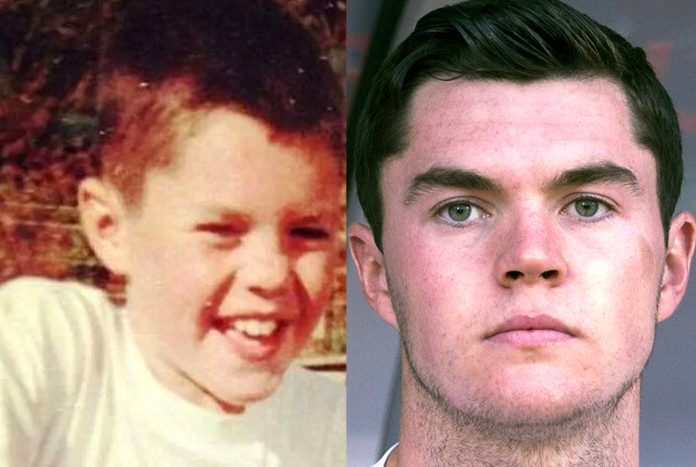 LB presents the Full Story of a Football genius who is best known as “Keane“. Our Michael Keane Childhood Story plus Untold Biography Facts bring to you a full account of notable events from his childhood time to date.

Yes everyone knows about his fantastic technique in maintaining ball possession as well as his defending capabilities. However, only a few consider Michael Keane’s Biography which is quite interesting. Now without further ado, let’s Begin.

Starting off, Michael Vincent Keane was born on the 11th day of January 1993 at Stockport in Greater Manchester, England. He was one among a set of twins born to his mother, Janet and to his father, Aidan.

The English national of anglophone ethnicity with Irish roots hails from a middle-class family background and was raised in the suburb of Heaton Mersey at Greater Manchester, England. Growing up in Heaton Mersey alongside his twin brother – William Keane, young Micheal was a happy kid and a football enthusiast who grew up dreaming of playing football at Old Trafford.

The origin of Michael’s desire to play at old Trafford dates back to his early life as the football prodigy and his brother were born in the year that Ex-Manchester United coach Alex Ferguson won the first of his 13 Premier League titles.

More so, Micheal’s father was a season ticket holder at Old Trafford and made it a point of duty to shape his sons’ childhood story by taking them along to watch games. It was only a matter of years before Micheal and his twin began training at the club when they were aged 11.

Micheal’s educational background comprises his studies at St Bede’s College in Whalley Range. While at the school Keane was predisposed to playing football than focussing on academics. As a result, he joined Manchester United as an academy scholar in 2009 at the age of 16.

So great was his dedication to football that he rose through the ranks and quit schooling at St Bede’s College in order to accord more time to the sport. However, he passed A-levels in physics, chemistry and biology with the help of a private tutor.

Micheal put up stellar performances which convinced former coach Alex Ferguson that he deserved a shot at the first team. Thus he was signed to Manchester United on the occasion of his 18th year birthday on the 11th of January 2011. Filled with hope and confidence Micheal made his first-team debut as a substitute in the League Cup on the 25th of October 2011.

Subsequent early career playtime saw Micheal start the first-team match against Newcastle United in the League Cup on September 26th 2012. At the peak of his early career, Micheal helped the Reserve team of Manchester United won the Reserve League North and the national play-off final during the 2011–12 season. He also clinched enough votes to win the award for the Denzil Haroun Reserve Player of the Year in 2012.

As part of efforts geared towards helping Michael gain more first-team action, he was loaned to clubs that include Leicester City, Derby and Blackburn. He fared well at the aforementioned clubs before returning to Manchester United.

While at his boyhood club Micheal was once more faced with the challenge of less playtime. Thus, his chances of rising to fame at the club were bleak. Neither was Manchester United willing to offer him a permanent contract.

September 2014 was the time which Micheal was loaned to Burnley. It was at Burnley that Micheal broke free from loan spells after the club secured his signature on a three-and-a-half-year contract for an undisclosed fee.

Proving his worth at Burnley, Micheal started his first full season at the club by scoring twice in the opening month of the 2015/2016 season.

He went on to help his side secure promotion back to the premier league and became one of six players shortlisted for the PFA Young Player of the Year award.

Micheal Keane is yet to get married at the time of writing. Neither does he have a tangible dating history. He is only known to have briefly interacted with beauty blogger Lauryn Goodman in July 2017 when the duo bumped into each other outside Rosso restaurant in Manchester.

Fast forward to date there has been no update regarding what the duo did next. As a result, Micheal is considered single and focused on proving himself at his present club Everton. He also has no son(s) or daughter(s) outside wedlock.

Micheal Keane was born into a family of four members. We bring you facts about members of his family beginning with his parents Janet and Aidan as well as his siblings.

Aidan is Micheal Keane’s dad. He is an Irish man who was born in Ireland but moved to England when he was aged nine. The supportive father is a lover of football and a great fan of Manchester United.

Janet is Micheal’s mom. She is also Irish and a lover of football. The supportive mother of two keeps up with Micheal games and watches him on TV whenever she’s far away from England.

Micheal has no sisters but a brother called William Keane. They both share the same childhood story and were products of Manchester United youth systems. William plays for Hull city as at the time of writing and has a great career history like his twin brother.

Micheal is yet to be identified with his grandparents, uncles and aunts. In the same light, not much is known about his cousins, nephews and nieces.

What do you know of Micheal Keane’s persona beyond his on-pitch appearances, sit back as we bring you makings of Michael’s personality in order to help you get a complete picture of him. To begin with, Micheal’s persona is a blend of Capricorn Zodiac traits. He is a smart and hardworking individual that always achieve what he set his mind towards.

Similarly, he is practical, confident and analytical. His hobbies include playing video games, watching movies, hanging out with friends and family as well as embarking on sightseeing tours.

Micheal is not the type of footballer that lives an expensive and showy lifestyle despite having a market value of £22.50 as at the time of writing. The football genius lives a middle-class humble lifestyle and knows how best to spend within his means.

The true value of Micheal’s house in England is yet to be determined neither is much known about the cars collection in his garage as he is rarely spotted driving to training or award ceremonies.

FACT CHECK: Thanks for reading our Michael Keane Childhood Story plus Untold Biography Facts. At LifeBogger, we strive for accuracy and fairness. If you find something that doesn’t look right, please share it with us by commenting below. We’ll always value and respect your ideas.