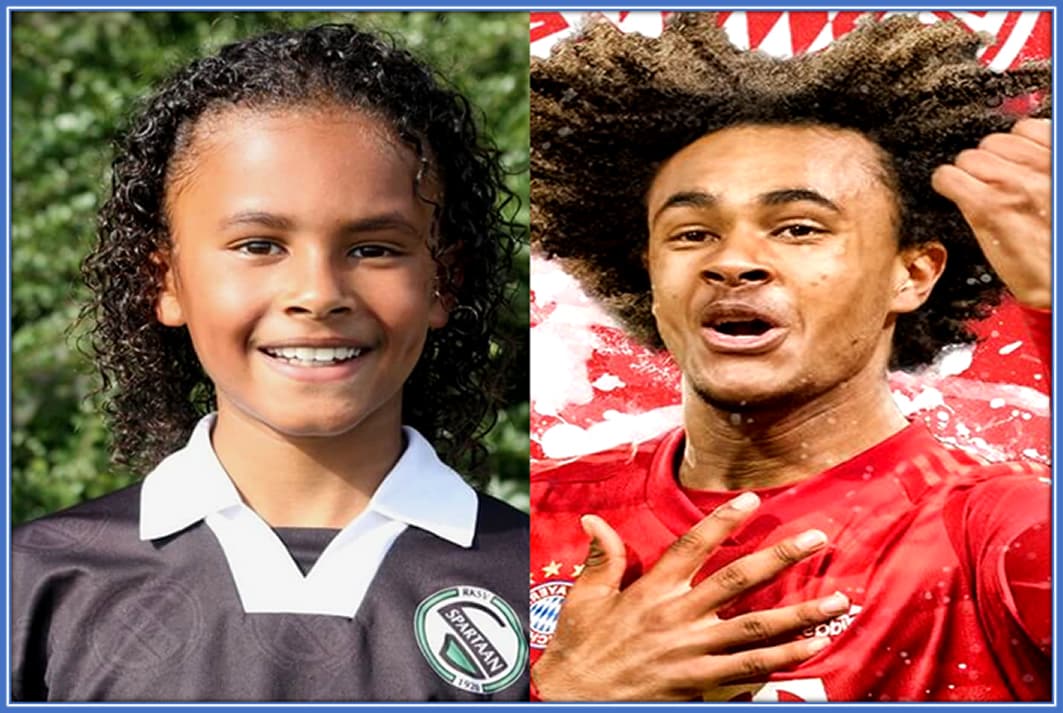 Our Joshua Zirkzee Biography tells you Facts about his Childhood Story, Early Life, Family, Parents, Girlfriend/Wife to be, Lifestyle, Personal Life and Net Worth.

In simple terms, we present you with the forward’s life journey. We begin from his early days to when he became famous.

To whet your autobiography appetite, behold his childhood to adult gallery — a perfect summary of Joshua Zirkzee Bio.

Yes, everyone knows he is a contender, as the possible heir to Robert Lewandowski’s goal-scoring throne. However, not many fans know Joshua Zirkzee’s Biography History, which is quite interesting. Without much ado, let’s begin.

For Biography starters, he bears the nickname -Josh. Joshua Orobosa Zirkzee was born on the 22nd day of May 2001 to his Dutch father, Remco Zirkzee, and Nigerian mother in the city of Schiedam, Netherlands.

Joshua came to this world as the eldest of two children born of the union between his parents.

The childhood of Josh was filled with so much interesting expeditions with Jordan, his younger brother. At 3, his family moved to Rotterdam, where sports has been the norm of society.

Like Marcus Rashford, little Josh was everywhere with the ball that he even played in the living room.

Regularly, his parents had to repaint the stained walls of their house because of his soccer activities. On several occasions, Zirkzee tried to play past his mother as she walked around the room with food.

Moving on to his ancestry, the footballer is a Dutch citizen who also has traces of Nigeria Roots.

Judging by his maternal family origin, the talented forward seems to be strongly affiliated to Isoko, which is a region in Delta state, Nigeria.

On the other hand, Zirkzee’s paternal Root is traced to Schiedam, which is a historic municipality in South Holland.

Apparently, his birthplace, which has an estimated population of 76,000 also comprises some very nice canals to cruise around. Moreso, it is well known for having the tallest historical windmills in the world.

Right from his childhood days, his parents had always provided him and his brother with all the things they needed.

Also, his family thrived as a middle-class household that didn’t have to worry much about lack of money. With their financial status, Remco and his wife could afford to send Joshua to a soccer academy.

As we’ve earlier stated, the iconic forward experienced a lot of sports-related expeditions while growing up.

To ensure Zirkzee utilized his inborn talent, his parents had him enrol at VV Hekelingen academy when he was 5.

Back then, the forward showed lots of promising potentials and literally out-matched his peers. He was a quick learner who never struggled to adhere to the directives of his trainers.

However, his father was not satisfied with his grass-root academy and sought a more competitive institute. Hence, Remco Zirkzee had his first son join Spartaan ‘20 under the tutelage of Ricardo Willemse in 2010.

For the next three years, the attacker worked with his Nephew (Nelson Amadin) to improve in both experience and tactics.

The rest of his Youth career days saw him moving from Spartaan ‘20 to ADO Den Haag. There, he featured for the club’s U-16, despite being 14 years old.

One thing about his early development was that Zirkzee was mostly stronger and taller than his teammates.

This feat made several of his peers figuratively look up to him. Some of his managers even attested to the fact that he is responsible for 95% of his improvement.

Nonetheless, scouts from Feyenoord did not miss out on signing the young talent to their club in 2016.

With his move to Bayern Munich the following year, he triggered a significant wave of euphoria with his first ball contact in the Bundesliga. With the Bavarians, he excelled whenever he was called to defend the shirt, despite playing behind stars like Robert Lewandowski and Eric Maxim Choupo-Moting.

Do you know?… The striker’s precision was immediately felt upon his arrival at Bayern Munich as he scored a hat-trick in his debut for the reserved team. This feat attracted applause from football superstars like Jerome Boateng.

With his influence in the armoury of Hansi Flick, Nigeria tried to snatch the golden boy into their squad. However, Josh snubbed every move made by Gernot Rohr as he featured for his fatherland.

No doubt, his career life with the Bavarians were filled with a series of celebrations as they won many trophies.

As I compile this Bio, Zirkzee is the youngest ever Dutch goalscorer in the Bundesliga. After completing his senior debut years with a continental treble, Bayern Munich loaned him to Parma in January 2021. The deal includes an option to buy. The rest, as they say, is history.

About Joshua Zirkzee Girlfriend and Wife To Be:

There is no way a young and hot-blooded player like Josh will not have a handful of female admirers.

At this stage of his existence, it is only natural that his decision to choose whom he wants to date becomes the most sensitive choice of his life.

On this note, Zirkzee is actively dating his beautiful brown-skinned girlfriend. Her name is Celina Kerr, and she is a famous Instagram model.

Certainly, he doesn’t need the permission of his father or mother to flaunt his girlfriend on the media.

What makes the Dutch golden boy thick?… First and foremost, he is the true definition of a person with the Gemini zodiac trait.

From what we’ve observed, Zirkzee can effortlessly string together words and characters with so much thoughtfulness that he impresses his peers.

Of course, he is not much of an alcoholic either. But the forward loves gulping down his carbonated drink while he enjoys a good time with his friends. Certainly, he considers his personal hygiene as a top priority. Hence, he doesn’t smoke.

The iconic athlete is wealthy, no doubt about that. With his 2021 Net Worth of approximately €2 million, Zirkzee has shown little interest in living a luxurious lifestyle.

On most occasions, the young but rich player prefers to ride his portable bicycle around the streets.

It is around the home that some of the greatest virtues and bonds are created, strengthened, and maintained.

Of course, Zirkzee has enjoyed lots of memorable and blissful moments with his family. Hence, we present you with information about his father, mother, siblings, and relatives.

The number one person who has influenced the striker’s career life is Remco Zirkzee, his dad. Interestingly, Josh’s father oversaw his soccer progression until he recorded success in the top echelons.

For the records, Remco disclosed that he imposed no career decision on his son. All he did was to support Zirkzee, as every father would do.

Yes, his mom’s arm is made of tenderness where he finds solace each time circumstances become distressing. She is a Nigerian and her black skin reflects the making of her African ancestry.

Certainly, her life did not start on an easy note, yet she was a living example to her boys. No doubt, the cheerful Dutch talent will always be grateful for the life lessons she has taught him.

Perhaps you didn’t know that Josh’s brother (Jordan Zirkzee) is also a soccer player. He has always been the best support for the attacker.

Interesting, Jordan who was born in 2005, also features in the same youth team — Feyenoord — as his brother did.

Like his elder sibling, Nigeria’s football federation is set to battle Netherlands for the upcoming talent.

As the saying goes, Grandmas are mothers with lots of frosting. Hence, they always make you feel they have been waiting to see only you all day long. No wonder Zirkzee shares an unfathomable bond with his maternal grandmother.

Interestingly, his granny doesn’t lose any chance to watch her grandson play for the Netherlands. Amongst his family members, there has been no relevant information about his grandfathers as well as his uncles and aunts.

To wrap up the attacker’s Biography, here are a few facts about him that would help you get a complete knowledge of his Life Story.

Our analysis of his earnings at Bayern Munich shows that Zirkzee receives an estimated sum of €830,000 annually – at the time of writing this Bio. To help you understand a clear breakdown of his Salary, we’ve prepared this table below.

You may be shocked if we tell you that an average Dutch will have to work for 3 and a half years to earn what Josh receives in a month.

We’ve strategically put up an analysis of his salary as the clock ticks. Find out for yourself how much Zirkzee has earned since you came here.

Since you started viewing Joshua Zirkzee’s Bio, this is what he has earned.

In the world of sports, where inking has become a way of life for many athletes, Zirkzee has turned a blind eye to the trends of the 21st century.

Perhaps being quite young is one of the reasons he is yet to follow the likes of Memphis Depay in inking tattoos on his body.

From the look of things, the striker’s ratings just like that of Chukwubuike Adamu, seem to be a joke. Apparently, his outstanding performance at Bayern Munich has not really elevated most of his stats on the 2021 FIFA analysis.

Despite having almost the same potential ratings as Perr Schuurs, Josh still has a lot of work to do before his qualities will start displaying green colours all over his Stats.

Finally, Joshua has accomplished much in his career life because his father supported his passion for soccer.

Moreso, his mother’s advice and brother’s companionship gave him the zeal to never give up in challenging moments. It is all thanks to his family that the world is privileged to enjoy his entertaining gameplay today.

As I conclude this story, Joshua – like Xavi Simons and Ki-Jana-Hoever  – aspires greatly to have a Dutch national team call-up.

Thanks for staying with us on the Biography of the Afro-Dutch golden boy. At Lifebogger, we always strive for accuracy and fairness while delivering your favourite footballer’s Life Story.

If you spot anything that doesn’t look nice in our Joshua Zirkzee Bio, Kindly let us know in the comment section. For a quick summary of the forward’s memoir, use our Wiki table below.