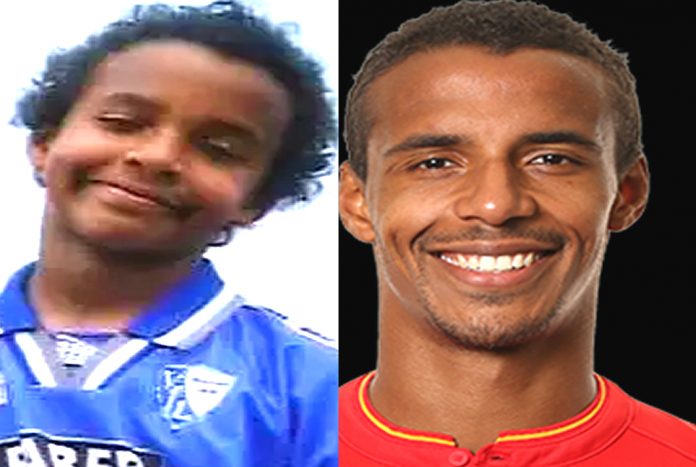 LifeBogger presents the Full Story of a Football Genius, best known by the nickname; “Jimmy“.

Our Joel Matip Childhood Story plus Untold Biography Facts bring you a full account of notable events from his childhood time to the moment he achieved fame.

Yes, everyone knows about his impressive 6′ 5″ height. However, only a few consider Joel Matip’s Biography, which is quite interesting. Now, without further ado, let’s begin.

For Biography starters, his real names are Job Joël André Matip. Joel Matip was born on the 8th day of August 1991 to his mother, Eva-Maria Matip, and father, Jean Matip, in Bochum, Germany.

Below is a photo of Joel Matip’s lovely parents at the time they supported their son during the 2014 FIFA World Cup.

Judging by their looks, you’ll agree that Joel was born a half-cast (a term used for individuals of multiracial descent). Did you know?… He was born to a Cameroonian dad and a German mum who possibly have Asian looks.

Joel Matip comes from a humble middle-class family background. His mum, Eva-Maria, is an eminent specialist in dementia care.

She has dedicated her life to working with sufferers of memory loss. Joel Matip’s mum also works for the German Red Cross.

Did you know?… Joel Matip’s father, Jean, was originally a chemistry teacher before venturing into soccer in his native country Cameroon. He came to Germany from Cameroon with a chemistry degree.

Joel Matip’s parents Jean and Eva-Maria met while his dad Jean was furthering his studies at the university in Bochum. They fell in love, sustained their relationship, got married, and gave birth to Joel.

Joel Matip grew up with his sister, Rebecca, who later became a successful dermatologist in Gelsenkirchen. He also has an elder brother named Marvin Matip, who is also a footballer.

It was hard for Joel Matip’s dad Jean to deal with his retirement from soccer. The former Cameroonian footballer devised a plan to continue living their dream through his sons, Mavin and Joel.

Having an ex-footballer as a dad, it is only natural for the game to be instilled into Joel even while he attended Gesamtschule Berger Feld school.

His passion for the game saw him getting enrolled part-time with SC Weitmar 45 in the year 1995.

It didn’t take long for little Joel to start making an impression with the club. Smiley Joel, pictured below, moved up the ranks very quickly as he thrived against players older than him.

Joel’s impressive performance earned him a spot in his hometown club, VfL Bochum.

It is normal for every young German footballer to dream big, and Joel Matip wasn’t an exception. His determination to play at a top German youth club wasn’t didn’t go as a passing fantasy.

At the age of nine, in the year 2000, Matip got enrolled with Schalke after a successful trial.

As Matip continued to mature, he saw himself settling well into life with the Academy, making serene progress through the age groups and into senior football.

Matip’s debut in the German top-flight saw him delivering a Man of the Match performance against Bayern Munich on November 7, 2009.

Topping off that impressive performance with a goal saw him becoming a happy starter with the club. 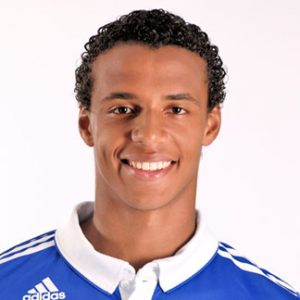 Matip went on to spend seven seasons with the club, making 194 appearances.

When his contract with Schalke got expired in the summer of 2016, Jurgen Klopp was among the managers who fought for his signature.

Thanks to old-time sake, the German Cameroonian decided to join his rival manager in Liverpool.

As at the time of writing, the Liverpool centre-back has become high and mighty in his formidable partnership with van Dijk and Dejan Lovern. The rest, as they say, is history.

Who is Larissa? Joel Matip Lover:

Behind every great man, there’s always a woman, so the saying goes.

And behind almost every footballer from African roots, there is indeed a glamorous WAG in the person of Larissa.

Larissa is probably the most mysterious WAG because no one knows anything about her except for the fact that she is dating Matip and loves to watch him play.

Getting to know Joel Matip’s personal life would help you get a complete picture of him. Joel is a dramatic, creative, self-confident, dominant, and irresistible personality.

He is able to achieve anything he wants to in any area of life he commits himself to.

Joel Matip has many friends, for they are generous and loyal like himself. His healthy sense of humour makes collaboration with other people even easier.

An example is revealed in his video with Daniel Sturridge.

Did you know?… There has been something cerebral, even surgical, about Joel Matip’s defending. Perhaps that is no surprise that medicine and soccer are his family trades.

Joel Matip’s family is one of the most successful German families from Cameroonian roots.

Thanks to the head of the family, Jean Matip, the Matip family has made history on producing the first black football coach in their homeland, Bochum.

Jean Matip, the former chemistry teacher (pictured below with his family) became a player and later a coach of FC Italia in B.

From the club angle, he made it to team captain of FC Ingolstadt, a German club in Bundesliga 2.

According to rumours, Matip’s mother’s side has more family members who have studied medicine. For instance, Joel Matip’s grandfather and his brother-in-law Martin are also doctors.

Unlike the medical trade, Joel Matip’s family from his father’s side has deep soccer roots. He is a cousin named Joseph-Desire Job, who had 52 Cameroon caps spanning between 1998 and 2011.

Unlike some of his brothers from African roots, the likes of Obafemi Martins, Mario Balotelli, Emmanuel Adebayor, etc… Matip isn’t the type of footballer who lives a Lavish Lifestyle.

A life that is easily noticeable by a handful of pretty impressive cars, the booze, the swagger, the girls, etc. He is very comfortable with his average Mercedes car. 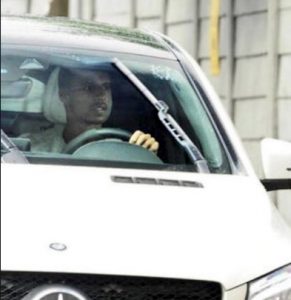 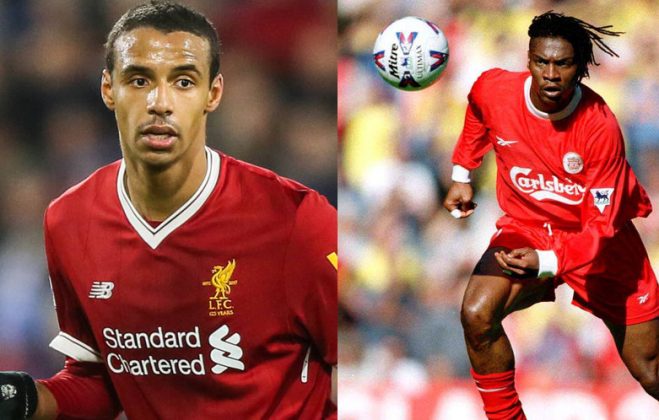 At the time of his signing to Liverpool, Joel Matip became the second Cameroonian to play for the Reds after her national icon, Rigobert Song.

Surprising Breakdown of his Wages:

This is supposed to run for five years. Imagine if you were the one earning much and what you will do with such monies!?…

FACT CHECK: Thanks for reading our Joel Matip Childhood Story plus Untold Biography Facts. At LifeBogger, we strive for accuracy and fairness while delivering you African Football Stories and that of Cameroonian Footballers.