LB presents the Full Story of a Football Star best known by the Nickname; ‘Vig’. Our Virgil van Dijk Childhood Story plus Biography Fact brings to you full account of notable events from his childhood time till date. The analysis involves his life story before fame, family life, relationship life and many OFF-Pitch little-known facts about him.

Yes, everyone knows about his abilities but few consider our Virgil van Dijk Biography which is quite interesting. Now without further adieu, let’s Begin.

Virgil van Dijk was born on the 8th day of July 1991, in Breda, Netherlands. He is Cancer by birth. He was born to a Dutch father (Ray Van Dyke) and Surinamese mother (Ruby Van Dyke). Virgil looks so much like his beautiful mother, unlike his father.

He was deemed very slow and small. This was followed by him being hospitalized due to a dangerous abdominal abscess he had. The scars still feature till date prominently on his lower stomach.

Luckily for him, he recovered from his abdominal and growth complications. Virgil’s fitness and growth after recovery became so excessive. To his parents, it was a miracle. This saw a successful start to his career.

Virgil travelled 255 km from his hometown in Breda to Groningen who gave him his first call to football. After becoming a professional player, he moved to Celtic in 2013, where he won the Scottish Premiership. He was named in the PFA Scotland Team of the Year in both of his seasons, also winning the Scottish League Cup in the latter.

In September 2015, he joined Southampton. The rest, as they say, is now history.

In making long-term relationship choices, Virgil went for a lady who he believes is less likely to be unfaithful and also, someone who would stand by him in all situations.

Virgil and his girlfriend Rike are of the same age and country (The Netherlands). They’ve been dating since their childhood time.

Virgil and the love of his life, Rike Nooitgedagt

Rike Nooitgedagt has been the one that has helped Virgil to settle into a new life right from his time in Willem II. She has been credited for giving up her high-powered job to move with the love of her life to Scotland and Britain.

Rike once said in an interview: “I worked as a sales manager and sold different fashion-brands to the stores in Holland. I loved it but had to resign to follow my man everywhere football takes him to. So far, we’ve been settling well and having adventures with our lovely dog.”

Virgil, Rike and their lovely dog

Rike is now a full-time football woman and Wag. More recently, Virgil publicly revealed his romantic side during their exotic holiday. He posted a picture of him lifting his bikini-clad partner off her feet and wrote: “You are the love of my life!”.

In another public display of affection, Rike posted: “I love you not only for who you are but for who I am when I’m with you.”

The couple had their first baby in 2014: a daughter who Virgil is very fond of as seen in the pic below.

Virgil tosses his daughter up the skies

The birth of their baby was quite an event. At the moment Rike was due in September 2014, Van Dijk, at last, got that invitation to the Netherlands national football team he had so desperately wished for. Also, the defender still did not want to miss the birth of his daughter. So what did he do?…

Virgil arranged for his girlfriend to prematurely give birth to their daughter. This was criticized by fans even the Netherlands coach, Guus Hiddink who called him up.

Having made the unnecessary choice, nemesis caught up with him. Guus Hiddink did not select him for the so-called anticipated match.

It was confirmed that Virgil van Dijk once cheated on Rike while she was pregnant. He allegedly offered Georgie Lyall monies to sleep with her.

The thought of meeting Georgie who filled up his mind while he spent time with Rike during his trophy celebration hour. A source revealed the pair were in contact the day before the jubilant Celtic squad got their hands on the silverware.

Love rat Virgil and Georgie had the following cheat text before they meet at an agreed hotel.

The following photo emerged which revealed before and after they were done, finishing themselves on hotel bed.

It was Georgie Lyall who decided to call it a quit after deciding to change her way of life. This happened after she accepted a university offer to study nursing.

In her words…: “I’ve been accepted for a nursing degree. Nursing is something I’ve always wanted to do. I sort of fell into the adult industry when I was young. I was in it for almost five years — but I’ve got everything out of my system”
She continued…“Now I’m mature enough to actually get the head down and give everything I’ve got to learning, getting a degree and doing something worthwhile.”

This was followed by her deleting her social media accounts. She insists she has no regrets
about her raunchy past and also in meeting Virgil.

The Dutchman after being caught said he had messaged her from an account he claimed
belonged to a friend. It was less than two weeks later unsuspecting Rike told him she was expecting a baby. Recent reports say he is now a changed man.

Van Dijk’s technical quality was in evidence from his very first appearance as a professional footballer. He was once used as an emergency striker for his first club Groningen. He led his team in a 4-2 victory over ADO Den Haag in April 2011.

He was soon moved back to his natural central defensive position, and quickly marked himself out as one of the most promising young defenders in world football.

VIirgil van Dijk has admitted facing Anthony Martial is not like playing in the Scottish Premiership.

This happened after the Dutch defender was run ragged by the Frenchman as Manchester United won 3-2 at St Mary’s. Martial even took sympathy on Van Dijk and helped him with his cramp before the end of the match.

Virgil is a Christian by faith. He creates a special time of prayer for his family, girlfriend and people that I love. Although he hardly goes to church.

In his words…‘When I was younger I went to church every Sunday and then when I got older I stopped. But sometimes I pray and I feel it has helped me through some tough times.’

Virgil van Dijk is cancer and has the following attributes to his personality; 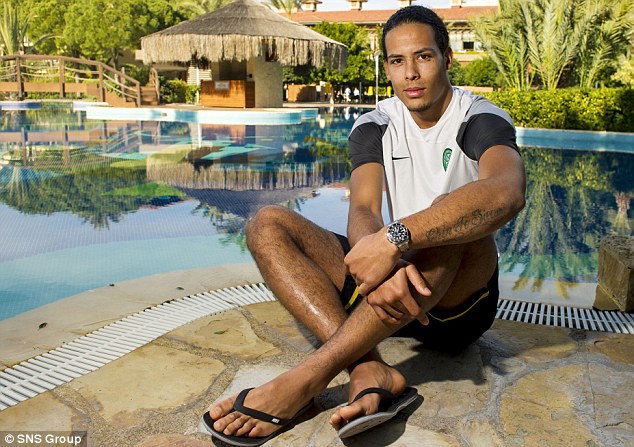 What Virgil van Dijk Likes: Art, home-based hobbies, relaxing near or in water, helping loved ones, a good meal with friends.

What Virgil van Dijk Dislikes: Strangers, any criticism of his Mom and revealing of personal life.

Thanks for reading our Virgil van Dijk Childhood Story plus untold biography facts. At LifeBogger, we strive for accuracy and fairness. If you see something that doesn’t look right in this article, please place your comment or contact us!