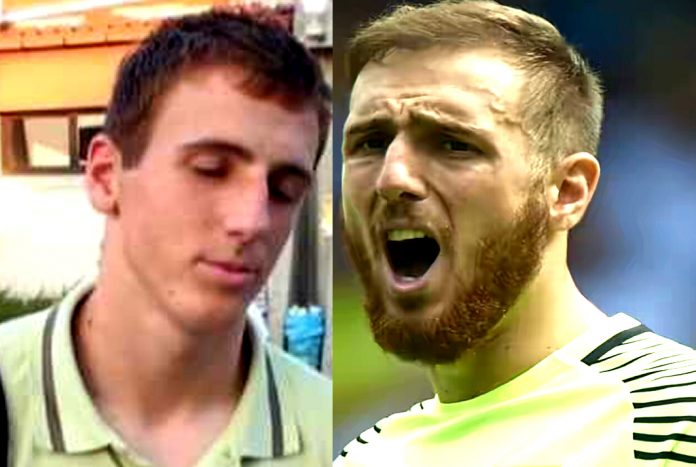 LifeBogger presents the Full Story of a Goal Keeper best known by the nickname “Jump Jump“.

Our Jan Oblak Childhood Story plus Untold Biography Facts bring to you a full account of notable events from his childhood time to date.

The analysis of the Legendary Slovenian Goalkeeper involves his life story before fame, family background, relationship life, and many other OFF-Pitch facts (little known) about him.

Yes, everyone knows of his goal stopping abilities, but only a few consider our Jan Oblak’s Bio, which is quite interesting. Now without further ado, let’s Begin.

For Biography starters, Jan Oblak was born on the 7th day of January 1993. His birthplace is Skofja Loka, a quaint mountain town in Slovenia. He was born to his mother, Stonjanka Oblak and to his father, Matjaz Oblak.

Growing up in his hometown, Skofja Loka (pictured below) which is best known for its historic and cultural significance young Oblak was surrounded with love from his sports-loving family who helped set him on his career path early in life. 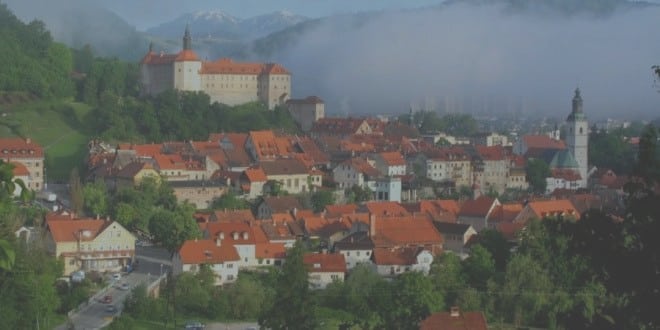 Oblak’s mother was a one-time amateur handball player, while his father was an ex-goalkeeper for Sencur, a team in the Slovenia third division.

To make the sporting family complete, Oblak’s older sister and only sibling, Teja Oblak is a basketballer who plays for Angels Kosice and is a member of the Slovenia women national team. 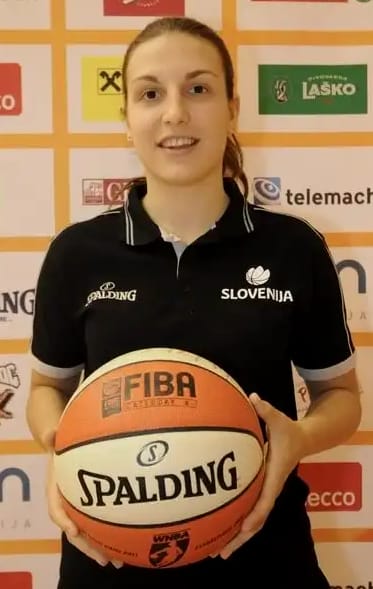 It would only be an anomaly if Oblak chose a career path that doesn’t require good use of his hands.

At the tender age of 6, he carved a niche for his hands by getting enrolled (with the help of his parents) into a neighbourhood team, Locan FC, where he learnt the basics of professional goalkeeping.

While Oblak was at Locan Football Club, he put up impressive performances that caught the attention of Zoran Matovic, the goalkeeper coach of Olimpija NK, who invited him over when he was only aged 10.

It wasn’t long before Oblak signed his first professional contract with Olimpija in January 2009 and became the youngest player to ever play in the Slovenian league when he made his debut at the age of 16. 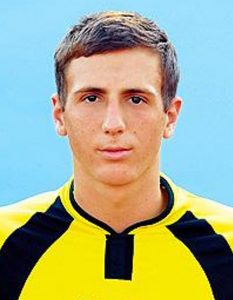 He pulled a lot of top saves and was highly respected by Janez Pate who was the coach of Olimpija at that time. Commenting on Oblak’s top form, Janez noted that:

“He has everything that a modern goalkeeper needs, Moreover, i was always surprised  by his maturity, Even though he was young he made it into the first team at Olimpija, he was eager to listen and followed all the instructions”

Subsequent career buildups saw Oblak represented Slovenia U21 and accepted a move to Portuguese giants Benfica in the year 2010.

Oblak remained relatively unknown until the 16th of July 2014 when he signed for Spanish powerhouse Atletico Madrid for a record fee of £16 million.

Thus, he completed a perfect transition from being a goalkeeper for his neighbourhood team to wearing the gloves for Atletico Madrid in the UEFA Champions League finals of 2014 and 2016. 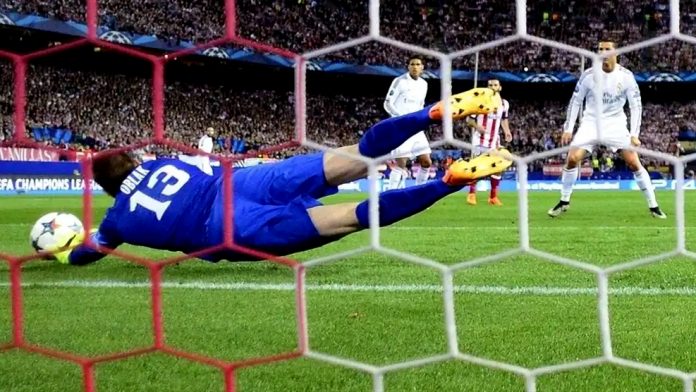 Jan did not make the high price tag placed on him affect his play as he fitted well into the big gloves left by former Atletico goalkeeper Courtois who departed back to Chelsea after a loan spell.

Like a fish on the water, he adapted quickly to life in Spain commanding his box very well and making unbelievable saves to become one of the best goalkeepers in the world today. The rest, as they say, is history. 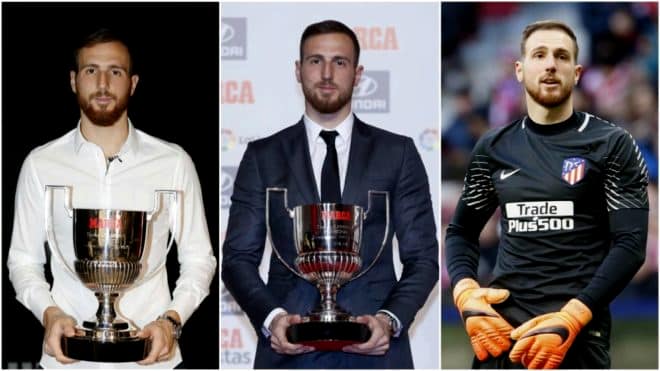 With Oblak’s rise to fame, the question on everyone’s lip is…Who is Jan Oblak’s girlfriend or wag?. 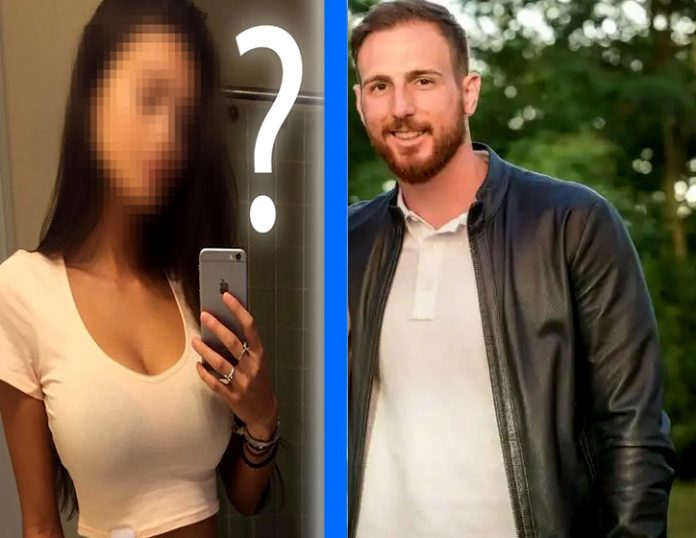 There is no denying the fact that Obalk facial features including his brown eyes and blonde hair are appealing to many ladies. However, Jan still remains single and is only focused on his career.

While a lady is yet to catch the eye of the handsome shot-stopper. A rather familiar “object” has stolen his heart. he posted this picture below on his Instagram page and captioned it:

“This ball is my girlfriend, nobody can take her away from me” 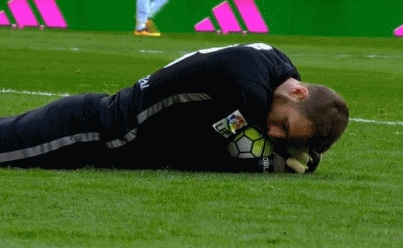 Jan believes he was born to be a goalkeeper and to walk in his father steps. From his childhood till date he has always looked up to his father, who was also a goalkeeper.

“I definitely became a goalkeeper because of my father. He has been playing football all his life as a goalkeeper.

I remember imitating him behind the goal while he was training and tried to throw myself like he did.”

Jan was nicknamed “jump jump” by Slovenian press because of his high jumping ability whenever he was on the field. This nickname as followed him all through his career.

Whenever Jan leaps to make spectacular saves, from his time to Olimpija to Atletico Madrid, his fans explode with excitement chanting “Jump Jump”. 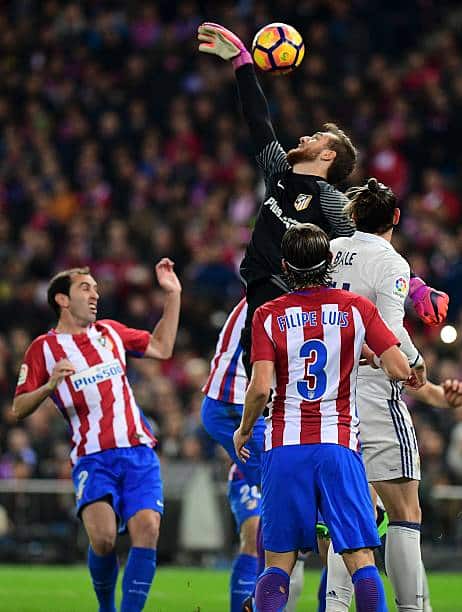 Oblak is one who strikes many with his calm personality, a trait that is rare for goalkeepers who have to make decisive moves at every second of each football match.

He also loves not talking about himself as he leaves fans to figure out his personality while he focuses on doing what he does best.

well, I think I’m calm, but I’ve also never really liked talking about myself. I know me and I know how I am, I guess everyone else sees me the same way.

Above all, the goal stopper is confident, cheerful and determined. 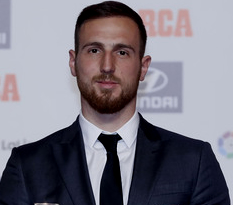 He is the highest bought goalkeeper in La Liga history 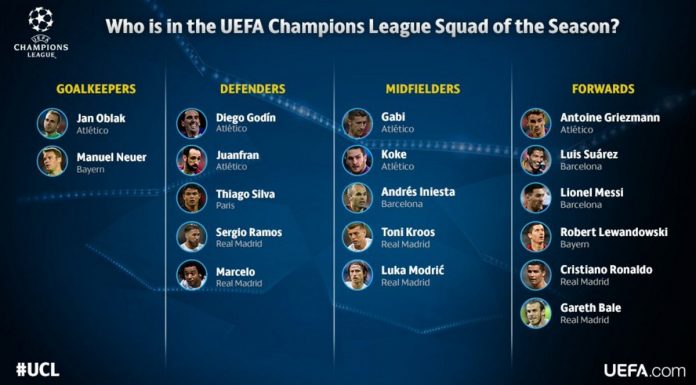 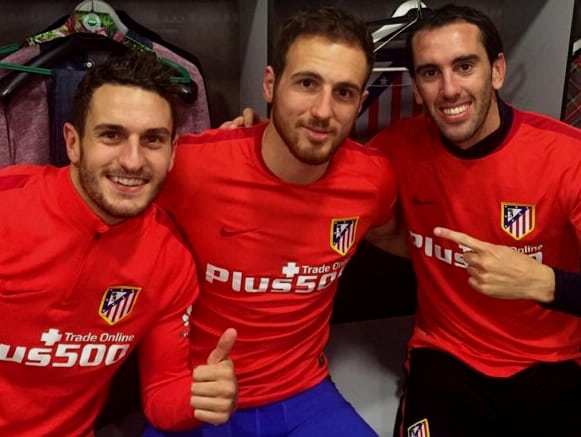 FACT CHECK: Thanks for reading our Jan Oblak Childhood Story plus untold biography facts. At LifeBogger, we strive for accuracy and fairness. If you see something that doesn’t look right in this article, please place your comment or contact us!.