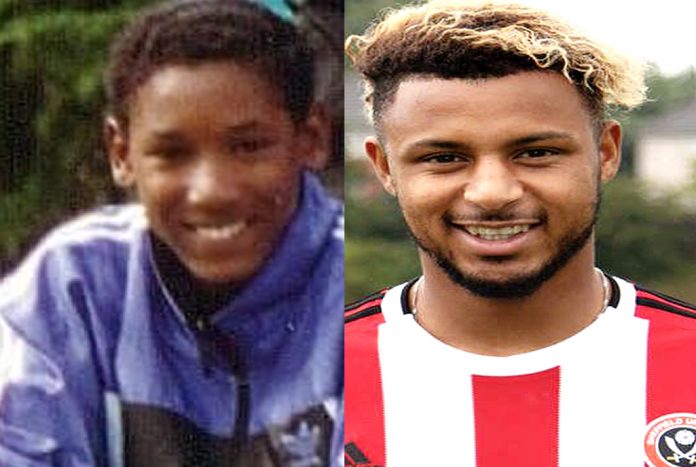 Our Biography of Lys Mousset tells you Facts about his Childhood Story, Early Life, Family, Parents, Girlfriend/Wife to be, Lifestyle, Net Worth and Personal Life.

In a nutshell, we portray the history of Lys Émilien Mousset, the French professional footballer. Lifebogger begins from his early days to when he became famous in the EPL.

To give you a taste of the engaging nature of this Bio, here is a pictorial summary of his life. Indeed, Luffy has come a long way in his amazing soccer journey.

Yes, everyone knows he is a powerful runner and an accomplished finisher, one who is capable of surging past defenders when presented with opportunities.

However, not many soccer fans have read our version of Lys Mousset’s Life Story, which is quite interesting. Now, without further ado, let’s begin.

For Biography starters, he bears the nickname “Luffy“. Lys Émilien Mousset Mendy. He was born on the 8th of February 1996 to his parents in Le Havre, the major port city of northern France’s Normandy region, France.

Lys Mousset has his family origin from the port city of Le Havre, which is just 150 km to the England South Coast.

The beautiful city where Lys Mousset’s family came was once described by UNESCO in 2005 as a World Heritage Site, thanks to its Modern Art Museum and impressionist paintings.

Although we believe Lys Mousset comes from France. But judging by his looks, you can easily deduce he has his family roots in Africa. Well, your guess was right.

The French man has his family roots in the West African country of Senegal. Did you know?… Lys Mousset’s dad is a Senegalese, while his mum, on the other hand, is French.

Mousset Lys hails from a middle-class family background. He grew up alongside his parents, who, early on, had him grounded from playing football.

Unlike his dad, who was less strict, Lys’s mum insisted her son must not compromise reading his books for playing football with friends.

The French man once revealed information (with the image below) about his upbringing from his Twitter account.

Despite facing tension from home, Lys still found a way to smuggle himself out and play football with friends.

In the end, football prevailed over academics, and after much convincing, Lys’ parents, especially his mum, finally believed in his dreams.

Both mum and dad supported. They push their son out to do the hard work in his quest to become a pro.

Lys, just like every other football aspiring kid, had A BIG DREAM to join Le Havre, his city’s biggest professional sports team and one of the oldest French football clubs.

However, he knew it wasn’t easy to join the competitive club that had academy players such as Paul Pogba, Dimitri Payet, Riyad Mahrez, Benjamin Mendy, etc. in their roaster.

With the early difficulties of joining Le Havre, the French man took other options. At the age of 7, Lys began attending a soccer school in his neighbourhood named Soquence Graville.

As he developed further, he moved on to a slightly bigger academy, Havre Caucriauville.

Spending two years at the academy saw him developing into a unique talent, one which made him feel he was ready to face a trial challenge with Le Havre.

At the time he passed trials and joined the prestigious Le Havre, the joy of Lys Mousset’s parents and family members knew no bounds. Lys joined the Le Havre academy in the year 2006 at the age of 10.

Lys spent nine years working his way up through Le Havre’s youth system. In 2012, he graduated to Le Havre II (the club’s reserve team), a moment that opened a new chapter in his life.

After being absent for a while, Mousset began to impress in Le Havre II, scoring 14 goals before making his debut for the first team.

Approaching the age of 20, Lys Mousset became hungry for fame. Even though the future looked bright while at Le Havre, the French footballer was eager to leave his country and go play abroad.

The Decision: In the 2016–2017 season, Lys Mousset followed the footsteps of Anthony Martial as he abandoned pursuing his career in France.

His journey to England saw him joining AFC Bournemouth, who was in their second consecutive season in the Premier League.

Things didn’t go as planned for the French man on the south coast of England.

Poor Lys Mousset suffered from lack of game time, a development that saw him managing just five goals in all competitions during his three years with Bournemouth.

He once voiced his frustration in his words to the French newspaper Paris-Normandie. He said;

“If I wanted to be third, fourth or fifth in line as a striker, I could have signed for Arsenal or Tottenham.

It’s bizarre, but I feel like I’ve been left to one side, and it annoys me to think I might go a season without scoring just because of a lack of game time

Frankly, I feel like I’m a spectator. I can’t stay like this. I always dreamed of being in England, but not in these conditions.”.

Back home, it was hard for the Mousset family members, especially his parents, to deal with seeing one of their very own falling down the pecking order with Bournemouth.

Looking out for options, Lys Mousset began to journey through various snakes and ladders of English football in order to get recognized as a first-team striker.

On the 21st day of July 2019, Lys Mousset signed for the newly promoted Premier League club Sheffield United. Thankfully, Mousset has since featured more regularly as a first-choice striker with Sheffield.

At the time of writing, the most noticeable aspect of Mousset’s game is his impressive strength.

He is a powerful runner and an accomplished finisher who is capable of surging past defenders when presented with opportunities. Below is a piece of video evidence of his style of play (Credit to FUT 10).

With his rise to fame with Sheffield United, it is certain that most fans must have pondered on whether Lys Mousset has a girlfriend or a wife.

Yes, there is no denying the fact that he isn’t handsome. His baby-faced cute looks indeed place him at the top of every lady’s love wishlist.

Lys Mousset has astonished fans with the ways he keeps his relationship life private.

From secret trips and definitely keeping off of Instagram, Lys Mousset’s girlfriend and baby mama has agreed with her man to stay out of the limelight.

Lys Mousset is famous in English football and even more important to his daughter. Despite his busy schedule as a footballer, Lys knows how to create and spend quality time with his daughter.

Without a doubt, his little girl does bring out the softies in him, a development that has made him one of the most doting football dads.

Getting to know Lys Mousset’s personal life away from football will help you get a complete picture of him.

Starting off, he is a cool, calm, and collected figure. Away from football, Lys loves to spend time alone on his beautiful Balcony, which has an amazing view of the South Yorkshire city centre.

He also fancies himself as a clean and cool-headed dude with an undeniable charm in his looks.

Thanks to a super weekly wage which sums up to a £1,037,089 annual salary, Lys Mousset is indeed gifted with the means to live lavishly, which implies an exotic lifestyle.

As observed below, Lys buys expensive clothes, watches, shoes, and most importantly, holds on to his super expensive car.

Simply put, the way Mousset devotes his wages to living an expensive lifestyle is similar to his commitment on the pitch.

While on career duties, What is the closest to Family for Lys Mousset? The Answer is his Senegalese family heritage.

Lys holds on to his Senegalese family roots and has a way of teaming up with his Senegalese brothers and showcasing his heritage with the colourful hand band.

At the time of writing, Lys’ family presently live a private and low-key life despite the paparazzi always on the prowl and the over numerous ways to connect with social media.

However, one thing is sure. His mum, dad, brother(s), sister(s), and entire relatives are presently reaping the benefits of having one of their very own who is at the helm of English football affairs.

It is only a matter of time before we get to see his family members on social media.

The Year He was born:

Also, there was no LinkedIn, Pinterest, Tumblr, Snapchat, and Flickr. Likewise, iPhones, camera phones, iPods, Skype, Gmail, Wikipedia, and iTunes did not exist yet. That year witnessed the release of the Nintendo 64.

The city he came from, Le Havre, is divided into eight parishes and has 24 places of worship (churches and chapels).

However, the non-existence of photo proofs of his religious practice has made us suggest Mousset could also be irreligious.

We all know Tattoo culture is very popular in today’s football world as it is often used to portray one’s religion or the people one loves. Lys Mousset, at the time of writing, is tattoo-free.

As observed below in his photo with AFC Bournemouth’s best friend Jordan Ibe, there are no inks in his upper and lower body.

FACT CHECK: Thanks for reading our Lys Mousset Childhood Story Plus Untold Biography Facts. At LifeBogger, we strive for accuracy and fairness.