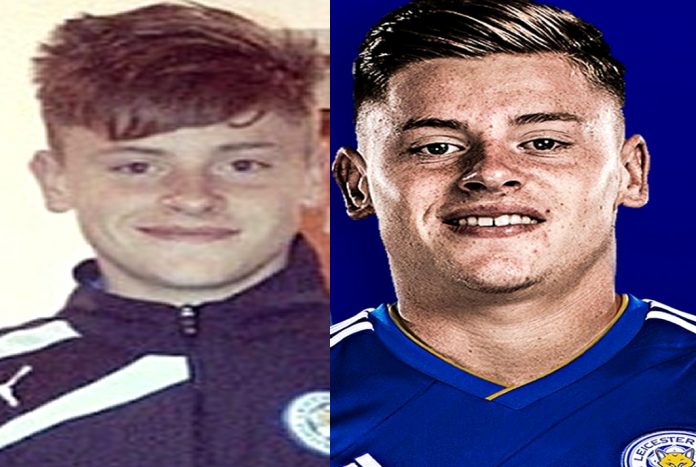 Our Biography of Harvey Barnes tells you Facts about his Childhood Story, Early Life, Family, Parents, Girlfriend/Wife to be, Lifestyle, Net Worth and Personal Life.

In a nutshell, we portray the history of Harvey Lewis Barnes. Lifebogger begins from his early days, to when he became famous with Leicester City. To give you a taste of the engaging nature of this Bio, here is a pictorial summary of his life.

Yes, everyone knows he is an exciting youngster who is so full of magical plays. However, only a few consider Harvey Barnes’ biography which is quite interesting. Now without further ado, let’s begin.

For Biography starters, he bears the nickname “The Ginger Messi“. Harvey Lewis Barnes was born on the 9th day of December 1997 to his father Paul Barnes and mother whose name is unknown in the town of Burnley, United Kingdom. He was the first fruit from the successful marriage between his parents pictured below.

Harvey Barnes grew up in a wealthy family background whose wealth came from football. His dad Paul Barnes was a classy first-choice striker for Burnley FC as at the time he was born.

Harvey Barnes grew up in Countesthorpe, Leicestershire alongside his siblings pictured below. Village in England which lies to the south of Leicester, and is about six miles from the Leicester city center.

In 2009, Harvey Barnes parent had him enrolled at Greenfield Primary School where he got the opportunity to passionately play competitive soccer. He was among the lucky boys who got invited to the Leicestershire & Rutland Schools Football Association competition known as The Rice Bowl. This competition saw him picking up interest to become a professional footballer just like his dad.

It was hard for Paul Barnes to deal with retirement from football with Hinckley United in the year 2005. Upon retirement, Paul began to groom his son in order to help him continue living his professional dreams.

As LeicesterMercury puts it, Harvey Barnes was football-mad during his childhood days. He would spend hours in his family garden with his dad, and he admits he couldn’t have had a better role model as he chased his dream of being a professional.

Harvey Barnes’ passion for soccer saw him passing trials in flying colours and getting accepted at the Leicester City academy at the age of nine. Understanding his son’s desire to play football for a living made his dad to teach his son all that was needed for him to excel at the academy.

Harvey Barnes had to make a lot of sacrifices. There are times he had to miss birthday parties or things you’re looking forward to at home and school simply because he was focused on football.

Opportunities came as Harvey Barnes continued to progress with his skills. At the age of 18, he was ready to leave Leceister academy. At 19 he began playing senior football with the club after winning the award for Leicester City Development Squad Player of the Year: 2016–17.

Harvey was shipped on loan to Milton Keynes Dons where he won the Young Player of the Year (2016–17) in his first season. This was followed by the Toulon Tournament Golden Boot award in  2017.

Harvey Barnes still went on to prove himself on loan at Barnsley & West Bromwich Albion where he scored spectacular goals tempting his parent club to initiate a loan recall.

On 11 January 2019, Barnes, because he had become very spectacular got recalled by Leicester with immediate effect. After seeing their youngster reportedly being tempted by a number of top clubs, Leicester decided to issue him a five-year contract. Just after the contract, in the wake on the 2019-2010 season, Barnes began to pay his dues. He had a thunderbolt strike, a goal of the season contender. Below is a piece of video evidence.

Without a doubt, the football fans might be on the verge of seeing a youngster blossoming into a world-class talent. The rest, as they say, is now history.

With his rise to prominence, lots of fans have begun wondering if Harvey Barnes has a wife or girlfriend. Upon research, we found out that behind the successful footballer, there exists a glamorous girlfriend in the beautiful person of Naomi Dann. Harvey and Naomi were both childhood sweethearts who grew up together to become lovers.

While Harvey became a professional footballer, his girlfriend Naomi became a fitness model who features for InstaFit, a UK clothing brand which also specializes in nutrition and diet.

For both lovers, it’s not only about work, but going to Turkey, their favorite getaways for the summer. The midfielder once shared a sizzling photo on his IG page where he appears to be completely at ease enjoying a sunny Jet ski holiday with his girlfriend in Turkey.

Harvey Barnes and his girlfriend Naomi Dann are close to remaining one of the most established couples of Leicester. The fact that both lovers have been dating for a while leaves no doubt that a wedding could be the next formal step.

What makes Harvey Barnes Tic?. Getting to know more facts about his personal life off the pitch would help you get a complete picture of his personality.

Harvey is a calm, cool guy who can be eccentric and energetic in a bid to achieve his goals. He has a vibrant, inquisitive, and exciting personality, one who is determined to live life to the fullest. When Harvey Barnes visualizes something in his minds, he does everything he can to achieve this.

Harvey Barnes’ family members are presently reaping the benefits of instilling a tough mentality into their very own.

Harvey Barnes Father: Paul Lance Barnes was born on the 16th day of November 1967. He was once an English former professional footballer who played as a striker for English clubs- Birmingham City, Bury, Chesterfield, Doncaster Rovers, Huddersfield Town, Notts County, Stoke City and York City. Paul Barnes in his prime won major individual and club honours during his active career days. Below is a photo of him as he lifted the York City Clubman of the Year trophy in 1994.

Paul Barnes successful career saw him ending up with scoring a whopping 185 career goals before having his son take over from where he left off.

Harvey Barnes Mother:  Unlike her husband Paul, Harvey’s mum lives a private and low-key life despite the numerous ways to connect with social media. Below is a photo of her and her son Harvey at the time he was 16 years old.

It appears Harvey wasn’t born as the only son to his family. He has a brother and two sisters. Harvey’s devotion to making sure all of his siblings are comfortable is similar to his commitment on the pitch.

Harvey Barnes Grandparents: Well, at least they are both alive. What Harvey Barnes need most are the essentials that his grandparents provide in abundance. They give him unconditional love and comfort.

In the modern football world, you are bound to see footballers showcasing exotic cars, mansion and clothing swagger. Judging from the photo below, it is fair to say that Harvey Barnes is a refreshing antidote.

His Best Friend: Both were born in the year 1997 and are products of Leicester academy where their bromance started.

Popular Event that happened the year he was born: We start with the sad one. Diana, Princess of Wales and member of the British royal family lost her life in August 1997. About a month before Harvey was born, “Titanic“- The epic, action-packed romance and fifth-highest-grossing film of all time got released.

FACT CHECK: Thanks for reading our Harvey Barnes Childhood Story plus Untold Biography Facts. At LifeBogger, we strive for accuracy and fairness. If you find something that doesn’t look right, please share with us by commenting below. We’ll always value and respect your ideas.