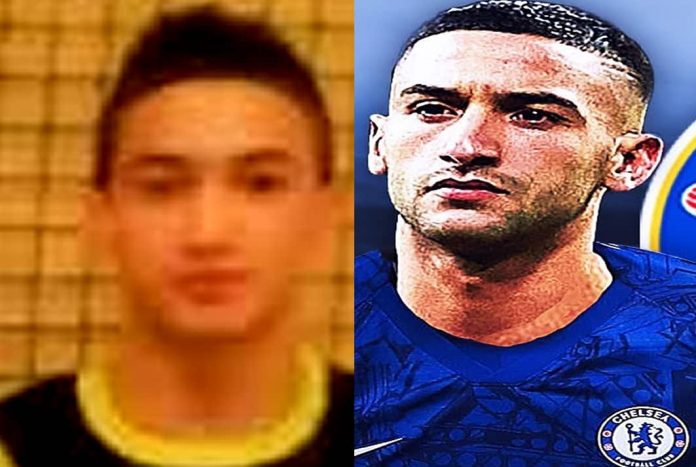 Our Hakim Ziyech Biography Facts gives full coverage of his Childhood Story, Early Life, Parents, Family Life, Girlfriend/Wife, Personal Life and Lifestyle. It’s a complete analysis of his Life Story, starting from his youthful days, to when he became Famous.

Yes, football fans know of his ability to take excellent set pieces and dribble well. However, not many have heard or read Hakim Ziyech’s Biography. Without further ado, let’s begin.

To start with, Hakim Ziyech was born on the 19th day of March 1993 at Dronten in the Netherlands. He was the youngest of 9 children born to his Moroccan mother and to his Dutch dad.

Young Ziyech grew up at his hometown in Dronten alongside his older brother, Faouzi Ziyech, a sister with the nickname Jam Ya and 6 other siblings whom not much is know about as of May 2020.

Growing up in Dronten, young Ziyech was only a five-year-old kid when he began playing street football alongside his older brothers who were excellent street soccer players at the time.

The brother’s love for football may not be unconnected to the fact that they were from a poor family. As such, playing football and attending school were activities that spoke of a bright future for them. Ziyech’s parents had no problems with him playing the sport while his sisters did ensure that he was well taken care of.

By the time Ziyech was 10 years of age, he lost his dad to a serious illness (multiple sclerosis). The death of his youngster’s dad was a very shocking event that made life hard for him and his family.

When Ziyech eventually overcame the shock, he began a career buildup in football by training with SC Heerenveen. Thanks to the training, the then 14 years old was able to be of little assistance to the finances of his family.

The youngster’s career at SC Heerenveen did take a bad turn when he became irregular in training and was – at some point in time – disrespectful to his teammates and coaches. The development could have put an end to his football aspirations if Aziz Doufikar had not made a plea for him.

It is worthwhile to note that Doufikar is the first pro-Moroccan player in the history of Eredivisie. His relationship with Ziyech go way back even before the youngster began training with SC Heerenveen. In fact, he was a father figure to Ziyech and once mentored him on how to play indoor football. The legend takes special recognition whenever writers make drafts of Hakim Ziyech’s biography.

Thanks to Doufikar’s intervention and good counsel, Ziyech got another chance with SC Heerenveen and made the best of it. His rise through the club’s ranks was meteoric, culminating in his Eredivisie debut during a 2-0 loss against NEC Nijmegen in August 2012.

Following Ziyech’s Eredivisie Debut, there was no end in sight to what he could achieve in professional football. Stats that spoke of a promising future for him, drew the attention of FC Twente which was quick to sign the midfielder in 2014.

Subsequent transfers saw Ziyech become a player of Ajax in 2016 after having an interesting 2-year career at Fc Twente. It wasn’t long before Ziyech won the hearts of fans at Ajax for his stellar performances in Dutch football, Europa League as well as the Champions League. 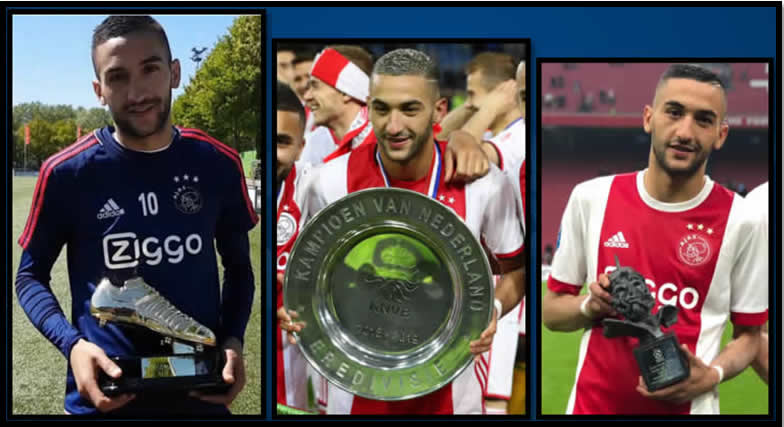 Fast forward to the time of writing this draft on Hakim Ziyech’s biography, his services have been secured by Chelsea FC where he hopes to be one of the creative midfielders in the premier league like Joao Moutinho, Christian Eriksen, Bernardo Silva among others.

Who is Hakim Ziyech’s Girlfriend?

Ever since Hakim Ziyech rose to fame, efforts have been made to determine if any girlfriend did play a role in his increasing top form and relevance in professional football. The search has not led to any profitable outcome as of May 2020 owing to the fact that Ziyech has kept his personal and private life confidential.

While opinions differ regarding the possibility that Ziyech might be secretly dating a wag or girlfriend, one thing remains constant; he is yet walking down the aisle with any woman and has no son(s) or daughter(s) out of wedlock.

Family takes an important stage in Hakim Ziyech’s life story. In fact, there is no way we could have accurately draft the midfielder’s biography without talking about his family. We bring you facts about Hakim Ziyech’s family life beginning with his parents.

Hakim Ziyech was born to a Dutch dad who he was very close to by virtue of being the youngest child. Hence, when he died in 2003, Ziyech was emotionally distraught. Ziyech does speak of his Dad in good light whenever the opportunity presents itself. This is an indication that a part of the player misses his father.

Ziyech’s mom is a Moroccan national. She did her best to raise Ziyech and his 8 siblings following the death of her husband. Her efforts and support are ever fresh in the heart of Ziyech who never forgets to praise her on special occasions.

Hakim has an older brother that goes by the name – Faouzi Ziyech. He is one of the siblings that did play a vital role in Ziyech’s childhood story. It was Faouzi that took it upon himself to play the role of a big brother by taking Ziyech to football training and placing him in care of a host family during his career buildup at SC Heerenveen. Another known sibling of Hakim is his older sister Jam Ya. We only know that ‘Jam Ya’ is her nick because Ziyech has not made any other thing known about her.

Away from Hakim Ziyech immediate family, not much is known of his ancestry particularly as it relates to his grandparents. Similarly, there is not much known about his uncles and aunts, a development which applies to his cousins and nephews. However, he does have a lovely niece known as Anissa.

What makes the footballer tick?. Sit back as we bring you makings of his personality to help you get a complete picture of him. To begin with, Ziyech’s persona is a blend of Pisces Zodiac traits. He is sensitive, emotionally driven and creative. In addition, Ziyech is funny and sometimes blunt with remarks.

He has just a few interests and hobbies that include spending quality time with his friends and parents, playing pool and sleeping whenever he feels the need to relieve himself of tensions.

Do you know that Ziyech has a net worth of over $7 million and takes home significant pay in the form of salary and wages for playing top-flight football? He lives a luxurious lifestyle which makes it easy to track his spending patterns.

Although not much is known about the value of Ziyech’s house in Dronten, Netherlands, we do know that a Mercedes Benz and Lamborghini Urus are part of the exotic rides in his cars collection.

To wrap up our Hakim Ziyech’s childhood story and biography, here are lesser-known facts about him.

Do you know that Ziyech is an ambassador for the Drontense SOEP project! (Samen Op Expeditie met Poen). The project helps to fix the lives of troubled young people by providing them with needed assistance.

Hakim Ziyech’s parents raised him in the Islamic way. He is an ardent follower of the religion and propagates its tenets by praying 5 times a day. He also does subtly make statements that have religious undertones during interviews.

The creative midfielders we know in football have good ratings that speak well of their expertise. Ziyech is not an exemption with his fair rating of 86 points. However, fans are of the opinion that Ziyech deserves 5 more points to level up with Kevin De Bruyne who has an impressive overall rating of 91 points.

Ziyech shares his birth year – 1993 with a number of technological advancement that came into existence that same year. The World Wide Web was born at CERN in 1993 while the introduction of  Pentium microprocessor by Intel was the same year. On the entertainment scene, 1993 was the year which movies like Schindler’s List and Jurassic Park hit cinemas.

Thank you for reading our factual writeup on Hakim Ziyech’s biography. At Lifebogger, fairness and accuracy is our watchword. As such, you are free to leave a message in the comment box if you come across anything that doesn’t look right in this article.