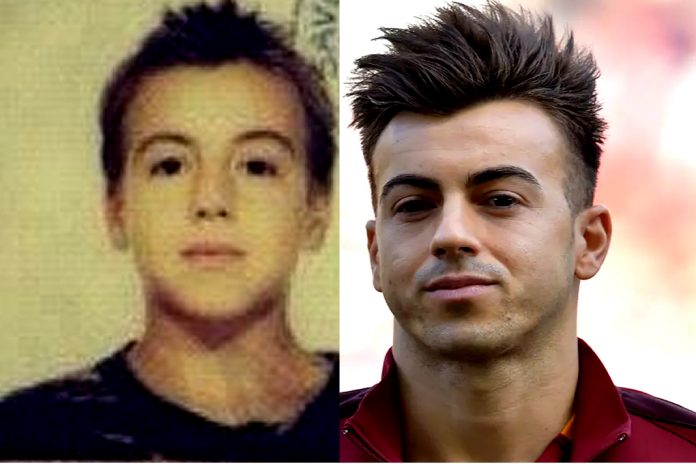 LifeBogger presents the Full Story of a Football Genius best known by the Nickname; “The Pharaone”.

Our Stephan El Shaarawy Childhood Biography story brings to you a full account of notable events from his early years to the moment he achieved fame.

The analysis of Stephan El Shaarawy’s Bio involves his life story before fame, family life and many OFF and ON-Pitch little-known facts about him.

Yes, everyone knows about his pace, dribble and agility, but not many have read Stephan El Shaarawy’s Biography, which is quite interesting. Now, without further ado, let’s Begin.

For Biography starters, Stephan Kareem el-Shaarawy was born on the 27th day of October 1992, in Savona, Italy. He was born to his Italian mother, Lucy El Shaarawy, and his Egyptian father, Sabri El Shaarawy.

His Dad, because of harsh economic conditions, left Egypt and migrated to Italy to start his family. Below is a photo of both parents.

Just like Edin Dzeko, Stephan was raised as a nominal Muslim, and he grew up with his one and only brother Manuel Shaarawy, who happens to be his agent and a big supporter of football.

Stephan’s childhood story is interesting, if not uncommon – it’s about that of a cute little boy who found himself blessed with extraordinary football talent. In fact, he dreamed of football since his childhood days.

As a child, Stephan was used to playing several sports but was more attached to football. When he was five or six, his parents allowed him to join Legino, a club in Savona. Stephan stayed there till he was 11.

Despite focusing on becoming a professional footballer, Stephan still managed to study, thanks to his mum. He was top of his class.

His parents agreed that their son had to finish school before registering for his first club, as seen in the ID below.

Because of academics, El Shaarawy became a late starter of full-time football. He started his youth career with Genoa quite late at the age of fourteen.

Despite starting late, Stephan broke into the first team in no time and that helped him grow in every sense of the sport.

By watching the videos of Ricardo Kaka, his role model, Stephan got a springboard, which led to continuous improvement.

His dad also contributed by granting him and his footballing friends permission to play in his little backyard behind his family house, not minding the noise it might cause.

Young Stephan believed in himself and showed commitment and determination in everything he did. As far as football was concerned, it was more about what he did with his head than his legs.

Stephan remained humble all through winning and losing situations. He was used to sorting out advice from my his friends and family on areas he could improve.

On 21 December 2008, when he was 16 years, he made his first-team debut, becoming the eighth youngest player in the history of Serie A to have made his debut in the Italian top division.

However, his career went sour due to a series of injury-hit campaigns which spanned between 2013 to 2015. This happened after having an unsuccessful surgery on his right foot which failed to heal effectively.

After a period of long absence through another injury, his club, Milan, decided to ship him out to Monaco on a season-long loan with an option to buy.

While on loan, Monaco played him foul, and his case became worst. Within that same loan season, Stephan got frozen out of the squad at a time he was one game short of Monaco activating the conditional obligation to buy him.

Disappointingly, he was shipped back to Milan, who quickly loaned him out to Roma as their loan agreement was more favourable and permanent.

A miracle came when Stephan scored a half-scorpion flicked back heel goal for Roma which made his deal remain permanent. The rest, as they say, is now history.

A report has it that Stephan started his relationship on the playground with his childhood sweetheart, Ester Giordano.

Their relationship took them from bestie status to true love. Stephan has once recalled that one of his earliest childhood memories which was declaring his love for Ester and believing they could get married someday.

Besides his professional career, Stephan El-Shaarawy is known to be an enjoyer of life with his girlfriend, Ester Giordano whom he is seriously dating.

They have not got married as at the time of writing neither do they have any biological or adopted children. All they do is get loved up every day and spending good quality time at sea-side.

The Superstar Baller has many attributes to his personality. Starting off, we present his LifeBogger rankings pictured below.

Strengths: He is cooperative, diplomatic, gracious, fair-minded, and social.

Weaknesses: He could be indecisive, avoid confrontations, and will carry a grudge and self-pity.

What he likes: He loves Flyboarding (as seen in the pictured below), being superstitious, having pre-match rituals, gentleness, sharing with others and having fun at outdoors (again as seen below).

In summary, Stephan is peaceful, fair, and hates being alone. Partnership for him is very important.

According to Stephan, the only thing that should be truly important to him is his own inner core of personality and his love for Ester.

He is someone who is ready to do nearly anything to avoid conflict, keeping his peace whenever possible.

Stephan comes from a middle-class family background, once operated by his father, Sabri El Shaarawy. Both parents pictured below started having their children during their late 30s. 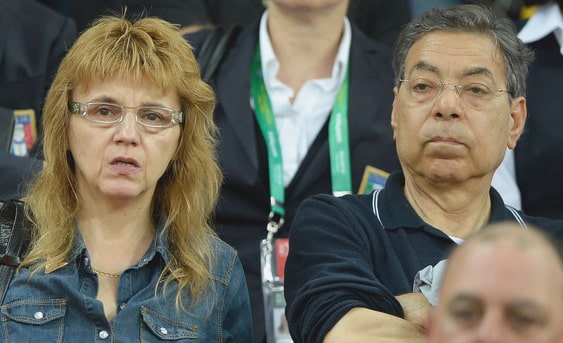 It is pertinent to note that back then, as a child, Stephan’s mum Lucia Shaarawy was more in support of her son continuing his education, while his dad wanted a combination of both education and football.

Stephan has a kid brother named Manuel El Shaarawy. Instead of leaning on his big brother’s wealth, Manuel, pictured below, became a football agent. 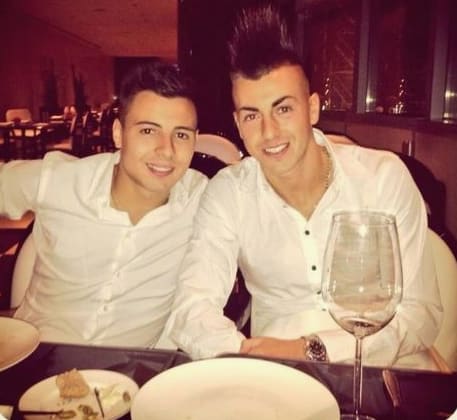 All thanks to his mum, Lucia. In less than 25 years, Manuel Shaarawy has become a master’s degree holder. In Markets and Business Strategies from the Faculty of Economics at the Catholic University of Sacred Heart, Milan, Italy.

His academic experience now joins his professional field in managing his brother’s career.

Once upon a time, Stephan’s fan Aldo once said…“My six-year-old son wants hair like yours. What should he do?”

“There’s only one thing to do, and that’s to take him to my hairdresser! I have three actually – one in Savona, one in Milan and one here in Rome.”

Aldo’s son ended up having Stephan’s hairstyle, as seen below. 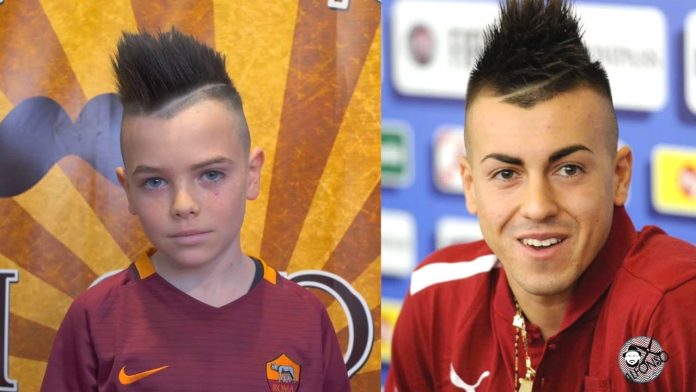 How long does it take you to comb your hair in the morning? And what gel do you use?

Stephan’s response…“Not very long at all. It hardly needs anything to do to it nowadays. I don’t even comb it. I just give it a blow with the hairdryer, use a bit of wax – not gel – and some hairspray to hold it in place, and that’s it.” 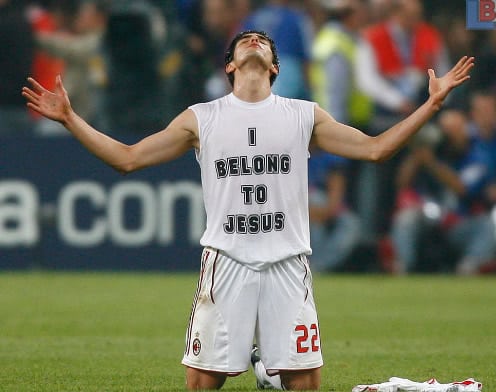 According to Stephan El Shaarawy… “I always used to watch Kaka when I was young – when he was at AC Milan. He was my role model, both on and off the pitch. He always came across as really down-to-earth, even before I met him.

Then I got to know him one time when we played Real Madrid in a friendly in America and he was exactly as I imagined – a wonderful person besides being a fantastic footballer.”

Rejected by his Father’s Land:

Initially, Stephan was qualified to play for the Egypt national football team but was denied by then-coach Hassan Shehata, who ignorantly stated that “not every Egyptian playing for a foreign league qualifies to play for the national side”.

Disappointingly, El Shaarawy then started playing with the Italy U-17 team, where he took part in both the 2009 UEFA U-17 Euro and the 2009 FIFA U-17 World Cup.

Thanks for reading our Stephan El Shaarawy’s Biography. At LifeBogger, we strive for accuracy and fairness in our quest to deliver you Italian Football Stories.