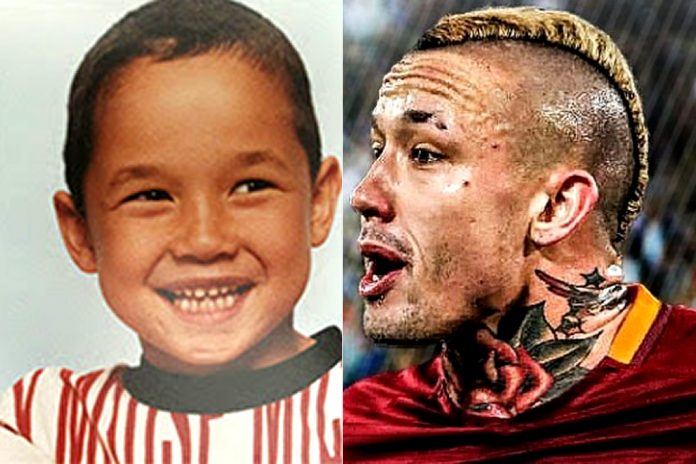 LifeBogger presents the Full Story of a Football Genius best known by the Nickname; “Ninja”.

Our Radja Nainggolan Childhood, including his untold Biography Facts, brings to you a complete account of notable events from his childhood.

The analysis of Nainggolan’s life story before fame, family life, and many OFF and ON-Pitch little-known facts about him.

Yes, everyone knows he is one of the best and most complete midfielders in Europe, but not many have read Radja Nainggolan’s Biography, which is quite interesting. Now, without further ado, let’s Begin.

For Biography starters, Radja Nainggolan was born on the 4th of May, 1988 in Antwerp, Belgium. He was born to his late mother, Lizi Bogaerts Nainggolan and father, Marius Nainggolan. They named him Radja, which means “King”.

The Belgian was born a twin. He was raised with his three half-brothers and twin sister, who is called Riana Nainggolan. Below is their childhood photo.

In Belgium, he was raised in a Flemish ethnicity but got stuck to his Indonesian origin. By roots, he is an Indonesian of Batak background and, by religion, a member of the Batak Christian Protestant Church.

As a little boy, Radja witnessed a dwindling relationship between his parents. His father boldly walked out on the family, walked out of Belgium, and returned to Indonesia.

Radja, his siblings, and his mother had to survive by themselves, having hardly any money. Any child who has lived through a parental break-up will know only too well the deep emotional pain it can cause.

This had damaging psychological consequences for Radja. The effects clearly had an impact on his development, which he endured during his childhood days.

Radja and his twin sister, Riana, received encouragement from her mother to play football, considering that any or all of both could succeed.

More so, knowing their capabilities and where they were coming from, Lizi Nainggolan saw football as a medium for her kids to get out of poverty.

Radja’s passion for football began when he was five. Along with his sister, he began playing in Tubantia Borgehout, a small club from his hometown. At the age of 10, he moved to Germinal Beerschot, a team in the Belgian top flight.

That was when he realised that football was indeed the future for him and his lovely twin. In order to have backups and not disappoint his mother, Radja never stopped studying. Both he and his twin sister, Riana, was at the top of their class.

Radja remained at Germinal Beerschot until 2005, when he was noted by Alessandro Beltrami, who helped him to move to Italian Serie B club Piacenza to have a smoother end to his youth career. After his youth career, he got promoted to their senior team.

In 2010, he moved to Cagliari, where he played for three seasons as an undisputed first-choice. 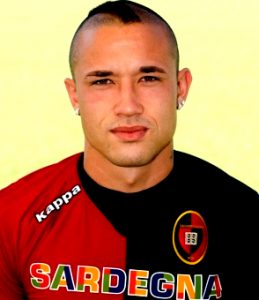 His performances with the Rossoblu made him especially popular among their fans, who named him in a top 11 list comprising the best players in the history of the Sardinian club.

This prompted Roma to go for his services in 2014. The rest, as they say, is now history.

Football is indeed a golden tree for Radja. A place where he found shade and solace away from his troubled reality.

Perhaps another golden tree that has brought more shade and solace is meeting his beloved wife, Claudia.

Claudia Nainggolan Lai, pictured below, is the wife of Radja Nainggolan. She is a simple, down-to-earth and very lovely lady who is nostalgic for her everyday life.

She describes how she met Radga saying…“I met Radja in Cagliari, and it was love at first sight. When I learned after two months that he was a footballer, I wanted to give up.

I know the life of a rich footballer is busy, more so, they have many admirers. At that time, I was working in a full-time shopping mall, a little I still miss it.

As muscular as he looked, I noticed shyness as he told me he loved me, surprisingly also at first sight. When he told me he was going to Rome, I did not take it very well.

In Rome, everyone looks properly dressed, unlike Cagliari. It took me time before I adapted.

After a year, I started going out with sneakers. I still miss having my first life, where I had more freedom to do certain things.”

Both Claudia and Radja Nainggolan decided to tie the knot in 2011.

Below is their wedding photo, which took place in the exceptional background of Cinecittà World, the amusement park of Castel Romano, Italy.

Their marriage was blessed immediately with the fruit of the womb. Aysha Nainggolan, their daughter was born on the 30th day of January 2012.

Claudia loves to follow her love, Radja Nainggolan, in the capital for a new adventure together with their child, who looks a little bit grown in the picture below. 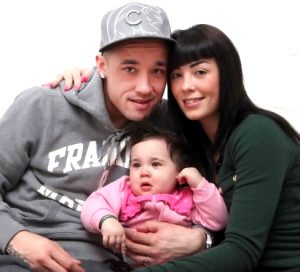 The couple has seen the downtime of marriage and has moved past it. Lately, the couple has gone through several quarrels, as reported on social media.

Italian police even pressed charges against Radja Nainggolan for abuses, threats and violence against his wife. Claudia. Fortunately, they have amended their differences.

Starting off, Radja has got Batak’s blood from his father, Marianus Nainggolan, who hails from Indonesia.

It is pertinent to state that Radja Nainggolan comes from a poor family background, all thanks to his dad, Marius, who left his country, Indonesia, with hopes of making it big in Belgium, only to find life still difficult for him to break through in Belgium.

This prompted Marianus Nainggolan to return to Indonesia to continue his business.

Today his hard work has paid off., while his son and daughter had made it big in football,  Marianus himself became an entrepreneur in the island resort of Bali.

At Piacenza also, Radja reunited with his father, Unlike other footballers like Deli Ali.
The moment occurred in late 2007 after a whopping 13 years.
“We finally meet again. Papa comes from Bali to Italy to see Riana and me,” said Radja, who has never held the sins of his father to his heart.

Radja’s mother is Belgian by origin. Before marriage, she was originally called, Lizi Bogaerts. Lizi married Marius and changed her surname to the Nainggolan.

Unfortunately, Lizi died in 2010, barely three years after her husband’s return from abandonment.

After her death, Radja tattooed two large wings on his back with her dates of birth and death. As seen below. In fact, Radja has his back completely devoted to his mother. 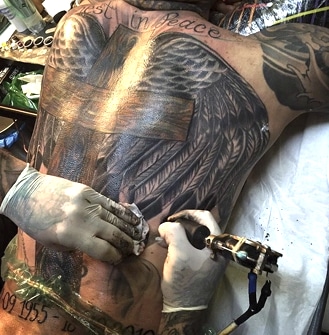 Riana Nainggolan is the senior twin to her twin brother, Radja. She was born a day older than her brother in Antwerp, on May 3, 1988.

As stated earlier, her brother’s date of birth is the 4th of May, 1988. Radja’s twin sister, Riana Nainggolan, just like her brother, also plays for AS Roma’s women football side at the time of writing.

She also shares her story of abandonment by her father, who once left not only her but her family in precarious conditions as a child. 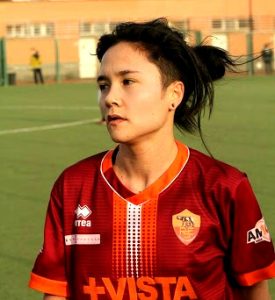 Before coming to Roma, Riana Nainggolan was still actively playing in the women’s soccer club of Belgium, Kontich. She has led her team to popular national competitions in Belgium.

Manuel Noboa pictured below is the half-brother of Radja Nainggolan. The first thing to know about him is the fact that Naboa is a Chelsea Fan.
Radja’s half-brother Manuel Noboa has once told the press;
“I have made it loud and clear on numerous occasions that my brother Radja, should go to Chelsea.
The Premier League is the ideal environment for his temperament. Unfortunately, he loves Rome too much.”

Radja Nainggolan, the Belgian with Indonesian roots, is, without a doubt, a fashionable man. Since arriving at Roma in 2014, his football numbers have increased every year.

He does not only stand out for his game on the field but for his extravagant looks and innumerable tattoos on his whole body, which indeed comes with excruciating pains. 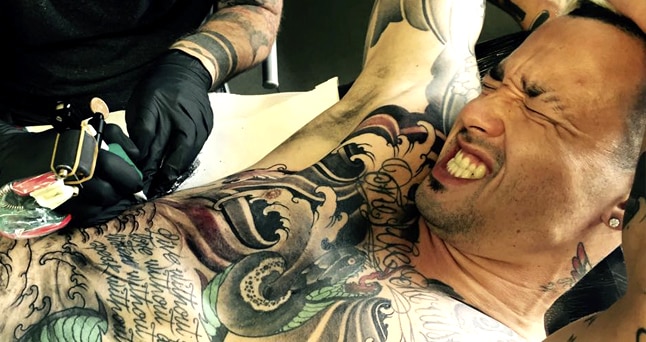 In several interviews, he has declared that all his tattoo have their meanings and they are special to him, especially those dedicated to his late mother.

Asides from looking at his hairstyle, If we do top-down radiography of Radja Nainggolan, we find a paradise full of tattoos, some have been covered by new ones, like the one on his neck, which reads; “The beginning” (The beginning).

Also, the date in numbers Romans with whom he played his first game at Piacenza has been replaced by a winged heart that lines the neck of the Belgian. See below; 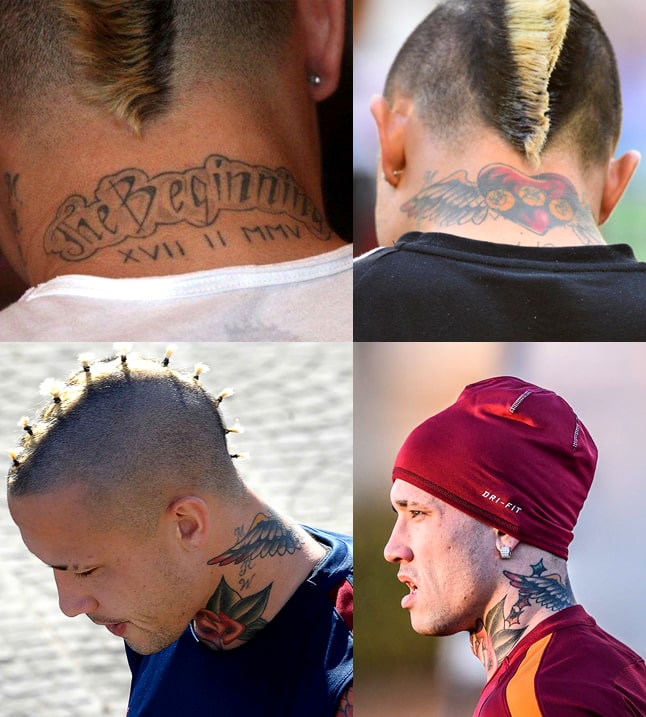 More visible in the front part of the body is the mighty tattoo on his neck. This is the big beautiful rose. 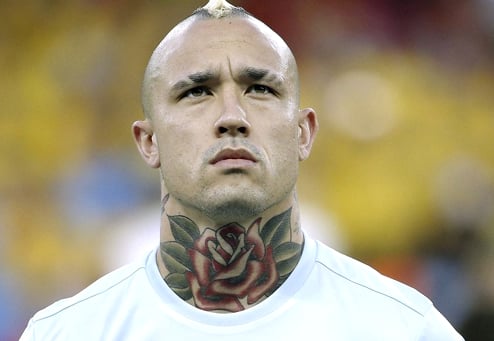 There is a long snake that runs through his torso and in between he has a tattoo in English: “Live without pretending. Love without depending. 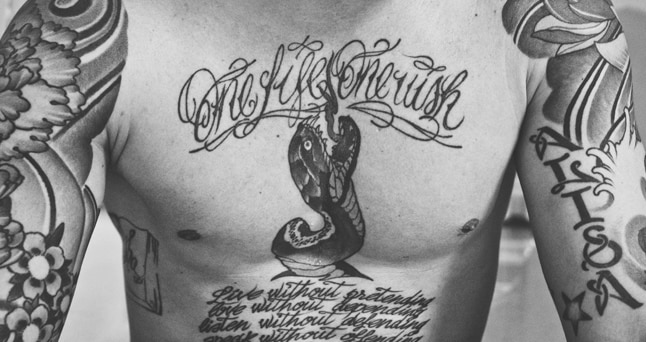 Nainggolan has a green tent on his left arm and a Buddha shown below. Above the tent is a lotus flower. 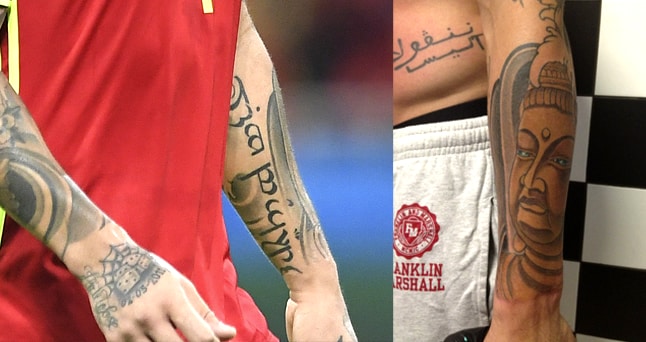 Close to the thumb, Radja has some dice, one with number 5 (Meaning MAY, his birth month) and the other, number 4, (Meaning he was born on the 4th day of May).

He also has an inscription which says… “Love to win” (I love to win) on his left hand. On his right hand, there is one that states…“Hate to lose” (I hate to lose). 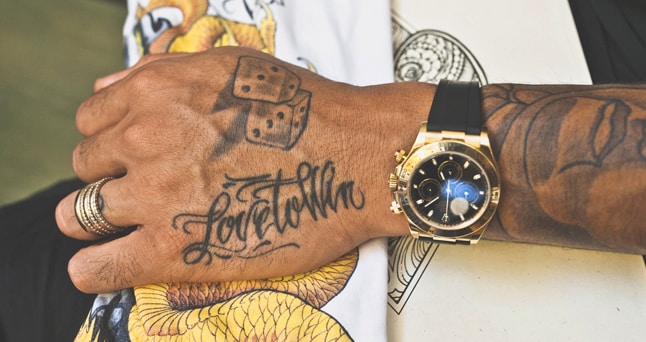 Radja has fewer tattoos on his leg. On the right thigh, he has tattooed a microphone with a cap and the initials RN4. More visible in the pic below is a scary dragon on his left thigh.

In the calf, he has the nickname ‘ninja’ with the number 4. His shin contains the name of his twin sister in Chinese, and in the ankle, the symbol of the dollar and ” Las Vegas”. 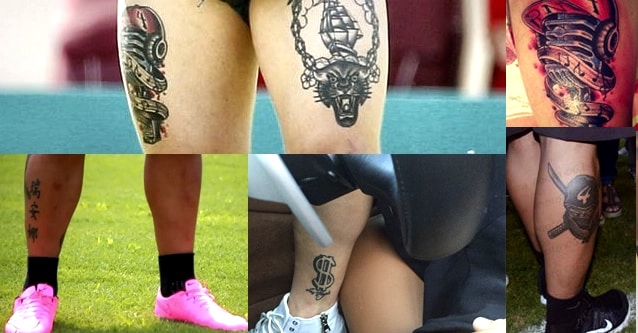 The left leg contains a small boxer (lateral), and in the front, a sword with one eye. 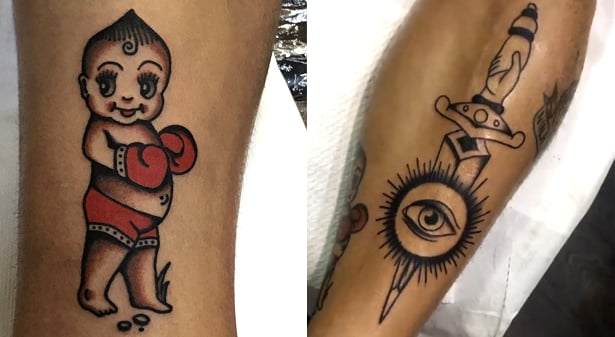 Radja Nainggolan has the following attribute to his personality. 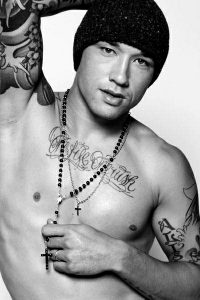 Strengths: He is reliable, patient, practical, stable despite his extravagant looks.

Weaknesses: He could be stubborn, possessive and uncompromising.

In summary, Radja is practical and well-grounded. He is someone who loves to harvest the fruits of his labour.

He feels the need to be surrounded by love and beauty and considers touch and taste the most important of all senses. Nainggolan is ready to endure and stick to his choices until he reaches the point of personal satisfaction.

He has also spoken frankly about smoking cigarettes amid reports he was recently dropped by Belgium coach Roberto Martinez because of his habit. 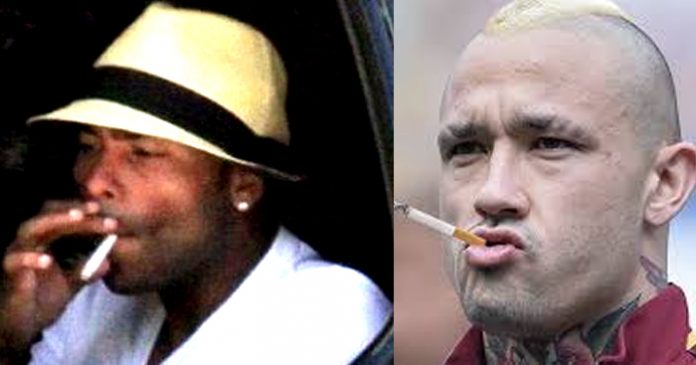 ‘I’m not ashamed because I smoke, and I’ve never hidden this habit of mine,’ Nainggolan told reporters outside the Belgium training camp.

“I know I should set a good example, I have kids… But I’m just a footballer, I do my job. Everyone knows that I smoke, and I can’t hide it, but I’m not ashamed.

Thanks for reading our Radja Nainggolan Childhood Story plus Untold Biography Facts. At LifeBogger, we strive for accuracy and fairness.