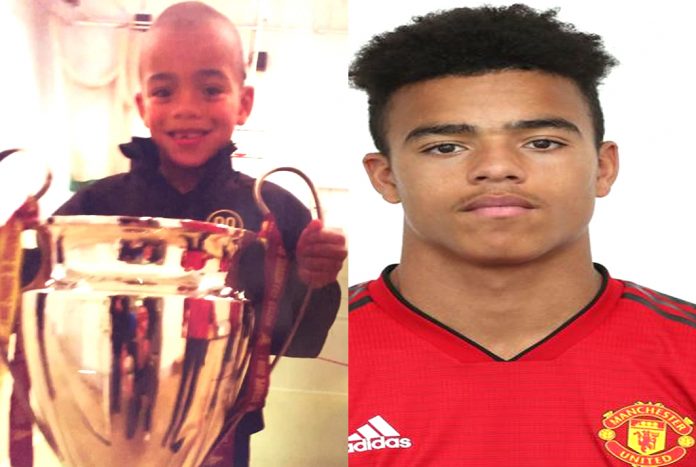 LB presents the Full Story of a Football genius best known as “Greenwood”. Our Mason Greenwood Childhood Story plus Untold Biography Facts bring to you a full account of notable events from his childhood time to date.

Yes, everyone knows he is one of the best two-footed players in Modern-day football. However only a few consider Mason Greenwood’s Biography which is quite interesting. Now without further ado, let’s begin.

Starting off, Mason Will John Greenwood was born on the 1st day of October 2001 at the small village of Wibsey near Bradford, England. He was born to his mother, Melanie and to his father, Andrew.

The British national of mixed ethnicity with African roots was raised at his birthplace in Wibsey near Bradford where he grew up alongside his elder sister – Ashton. Growing up at Wibsey, Greenwood was part of a family that valued sports and athletics.

As a result, Greenwood grew up loving football and was a boyhood fan of Manchester United where he idolized stars like Wayne Rooney.

By the time the football enthusiast was aged 5, he began playing for the local team – Westwood Juniors and looked forward to an auspicious future in the sport.

While playing for Westwood Juniors, Greenwood put up impressive performances that caught the attention of scouts from Manchester United who facilitated his entry into the club’s development school at Halifax.

It was at the academy that Greenwood began exhibiting character and skillset including turning up early for practice, pulling off powerful shots with both feet as well as rapid implementation of any trick he has been shown.

Greenwood steadily rose through rank with Manchester youth side, recording impressive statistics and dabbling into competitive interests like athletics where he entered an Under-13 competition that saw him broke Great Britain 100 meter record for his age group.

At the peak of his early career, Greenwood’s top form saw him secure double promotion to Manchester United’s under-18 squad for the 2017–18 season.

While with the youth side, he finished as top scorer of the U18 Premier League North with 17 goals in 21 games and was also named Player of the Tournament when his side won the ICGT Trophy in the Netherlands.

2018 was the year in which Greenwood began training with Manchester’s first team and was handed a place on the bench for United’s final Champions League group game against Valencia by then Manager Jose Mourinho.

The then 17 old went on to travel with United’s first team on their pre-season tour of the United States and soon made his non-competitive debut as a substitute for Luke Shaw in United’s 1–1 draw against Club America.

Having proved to be one of the highly-rated prospects in United’s Academy, Greenwood was handed his first professional contract on the 2nd of October 2018, however, he was never used for a major match for the next five months.

Greenwood finally made his competitive debut on the 6th of March 2019 as a substitute during United’s 3–1 win against Paris Saint Germain in the UEFA Champions League.

With the debut, Greenwood – aged 17 years and 156 days – became the second-youngest player to represent Manchester United in European competition as well as the youngest ever in the Champions League era.

Fast forward to date, Greenwood has cemented his relevance in Manchester United’s first team as a reliable forward with many comparing him with veterans like Robin Van Persie Wayne Rooney, and Ryan Giggs. The rest, as they say, is history.

Mason Greenwood is yet to be married at the time of writing. We bring you facts about his dating history and current relationship status. Speak of Greenwood’s dating history, little was known about the forward’s romantic life before his rise to fame.

It wasn’t until the 8th of June 2019 that Greenwood posted a photo of his little known blonde girlfriend on Instagram.

Mason Greenwood comes from a middle-class family background. We bring you facts about his family life.

Andrew is Greenwood’s dad. He is an engineer who works in the Yorkshire region while his family reside at Manchester at the time of writing. Andrew has been of positive influence in the forward’s life and supports him in the capacity of a father figure.

Melanie is Greenwood’s mom. She helped contribute to the forwards excellent upbringing particularly in instructing him to be humble and grounded as perceptible in his demeanour today.

Melanie lives close to Greenwood at Manchester as part of efforts geared towards providing the forward with the right environment that would get him far in his career.

Greenwood has an elder sister identified as Ashton. She is is a sprinter who runs for Trafford and attends Manchester Metropolitan University on a sports scholarship at the time of writing. She is no doubts close to Greenwood who also has interests in sprinting.

Away from Greenwood’s immediate family, little is known about his paternal grandparents as well as maternal grandfather and grandmother.

Similarly, there are no records of Greenwood’s aunts, uncles, nieces and nephews while his cousins have not been identified in notable events of his early life till date.

What makes Mason Greenwood tick? Sit back as we bring you makings of his personality to help you get a complete picture of him. To start with, Greenwood’s persona is a blend of Libra’s zodiac personality traits.

He is down-to-earth, altruistic, responsible, and rarely reveals details about his personal and private life.

Regarding Greenwood’s interests and hobbies, he loves listening to music, sprinting, taking photoshoots, watching movies, and spending time with his friends and family.

Mason Greenwoods net-worth is still under review at the time of writing. However, he has a market value of €7,00 Million.

The origin of his little-known net-worth has its bedrock in the salary he receives from footballing endeavors while analysis of his lifestyle reveals that he lives a conservative lifestyle.

It is worthwhile to note that Greenwood is not a big earner at the time of writing, thus focus is extremely placed in the forward’s performances on the field of play instead of his possible possession of assets like houses and cars.

To wrap up our Mason Greenwood childhood story and biography we present untold or lesser-known facts that are hardly included in his bio.

FACT CHECK: Thanks for reading our Mason Greenwood Childhood Story plus Untold Biography Facts. At LifeBogger, we strive for accuracy and fairness. If you find something that doesn’t look right, please share with us by commenting below. We’ll always value and respect your ideas.