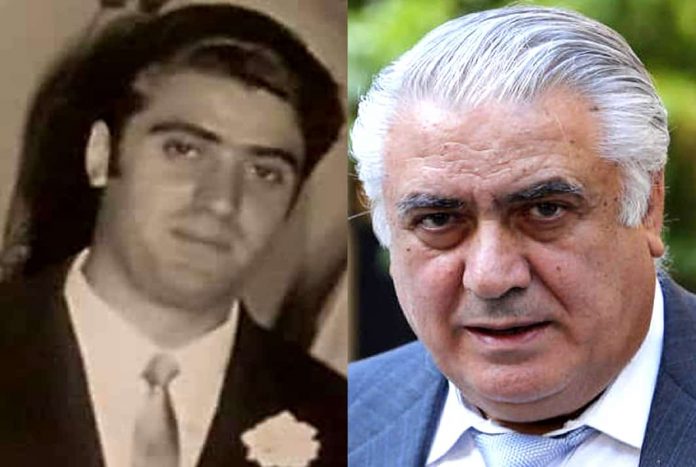 In a nutshell, we provide you with significant events in the history of the late Spanish businessperson.

Lifebogger begins from his early days to when he became famous. To whet your autobiography appetite, here is an early year to fame gallery — a great intro to our version of  Lorenzo Sanz’s Bio.

Yes, everyone knows he is one of the most prominent Spaniards to die of coronavirus, also known as Covid-19. Not forgetting, one of the Elites of Real Madrid Football Club.

However, only a few have read complete articles of Lorenzo Sanz’s Biography, which is quite interesting. Now, without further ado, let’s begin.

Starting off, Lorenzo Sanz Mancebo was born on the 9th day of August 1943 at the city of Madrid in Spain. He was the eldest of 10 children born to his parents, who not much is known about at the time of writing this biography.

Thanks to being born in the capital and most populous city of Spain, Sanz is a ‘Madrilenian’ by virtue of birth and the fact that he grew up in the city alongside his nine younger siblings.

While growing up in Madrid, Lorenzo Sanz was a sporty kid, with football being his all-time favourite.

It was football that kept him happy for much of his childhood, even as he did toil to help keep his lower-class family financially afloat.

The causes of Sanz’s family’s meagre finances were not far from the fact that his dad was a keeper of Madrid city’s park – El Retiro. The job was one of the lowest income-earning endeavours at the time.

Being the eldest of his siblings, young Sanz took it upon himself to make the family have just enough money.

Thus, he often ran errands for hairdressers and made out time to help his grandmother sell water to fans at Real Madrid’s stadium.

It was during one of such sales that Sanz saw Real-Madrid lift their 2nd European Cup (now widely known as the Champions League trophy) at the Santiago Bernabeu stadium in Chamartín.

Witnessing the Los Blancos lift Europe’s best trophy was a euphoric moment for everyone at the stadium, especially for Sanz, who soon began a competitive career buildup in football as a goalkeeper.

When the time was right, Sanz’s football career as a goalkeeper began in earnest. He did play for different minor Madrilenian league teams that include Puerta Bonita.

Unfortunate or fortunate for Sanz, he didn’t record meaningful progress with the endeavour.

As such, it was easy for him to make the decision to delve into the world of business. However, the transition was not rapid.

He was first a publicist before he made enough money to acquire a printing press as well as a magazine about furniture.

Being an astute businessman, Sanz went on to expand his coast by running a wallpaper company and delving into real estate. He soon became very influential, such that he was friends with Francoist politicians.

By the 1980s, an ambitious Sanz was running Madrid’s racecourse. Amidst his varying business endeavours, Sanz was very much in touch with Real Madrid affairs.

In fact, he slowly went from being a passionate fan to a socio, board member, vice president and eventually president.

When Sanz took over Real Madrid as President in 1995, the club was literally a mess and had not won the champions league trophy for 32 years! In fact, the Los Blancos were nowhere close to qualifying for the European tournament!

Like a saviour sent by the god of soccer, Sanz was successful at changing Real Madrid’s fortunes.

He oversaw the change of a number of managers and brought in star players like Davor Šuker and Predrag Mijatović with his own money.

The move paid off as Real Madrid won the Champions League in 1998 for the first time in 32 years. About half a million fans took to the streets of Madrid to celebrate the historic win and sing Sanz’s praises.

Real Madrid won the trophy again in the year 2000 before Sanz lost his position to Florentino Pérez in a narrow election contest.

Amidst Sanz’s success in business and engagements in Elite football management, there was a woman who stood by him through thick and thin.

She is no other person but his wife, Mari Luz. Not much is known about when Sanz and Mari Luz began dating or went down the aisle.

Until Sanz’ demise, in March 2020, he was much close to his wife and children, who reverently had him in their thoughts and prayers after his contraction of coronavirus (aka covid-19) that saw to his death.

Lorenzo Sanz was from a lower-class family background setting. We bring you facts about his family members.

About Lorenzo Sanz’s father and mother:

Sanz’s dad was a park keeper who didn’t earn much from the endeavour, while little or no documentation exists about his mom.

Notwithstanding, he held his parents in high regard and did his best to help them sustain the family even while working his way up to seek a breakthrough in football.

About Lorenzo Sanz’s siblings and relatives:

Away from Lorenzo Sanz’s parents, not much is known about his nine siblings. Neither are there records of his family origins, especially as it relates to his maternal and paternal grandparents.

Sanz’s son-in-law (Malula’s husband) is a former Spanish soccer star – Míchel Salgado while his aunts, uncles, nephews and nieces are unknown at the time of writing.

Lorenzo Sanz was – before his sad demise – known to be an embodiment of likeable traits that include his unwavering passion, humility, dedication to duty, admirable leadership and optimistic dispositions.

Whenever Sanz was not pursuing business and football interests, he could be found engaging in activities that are known to be his interests and hobbies.

They include horse racing, playing card, smoking Cuban cigars and spending quality time with his family and friends.

Did you Lorenzo Sanz’s net worth was over a decent sum of $5 million before his demise? The bulk of Sanz’s wealth has roots in his real estate, club ownership and construction endeavours.

Thus, he was able to live the luxurious lifestyle of upper-class citizens who have expensive houses spread across Madrid. What more, he rode in nice cars and never had reasons to declare bankruptcy.

To wrap up our Lorenzo Sanz childhood story and biography, here are little known or untold facts about the football elite.

Unlike active sportsmen and managers, it is hard to state whether Lorenzo Sanz was a religious individual or not because he wasn’t big on social media. Neither did he grant interviews on a regular basis.

Did you know that Sanz was born on the year which the German propaganda film Titanic hit cinemas? Also, 1943 was the year when Frenchmen Jacques Cousteau and Emile Gagnan did defy the odds of breathing underwater by inventing the Aqualung.

Little-known acquisition: Not many know that Sanz was the owner of the Spanish club Málaga CF between 2006 – 2009.

His son Fernando was president of Malaga before the club was sold in 2010 to a Qatari investor for the sum of €50 million.

We are grateful for reading our version of the Late Lorenzo Sanz’s Biography and Childhood Story. At LifeBogger, we strive for accuracy and fairness in our quest to deliver you the Biography of Football Elites.

Stay tuned for more of LifeBogger Elite Soccer Stories. The Biography Story of Richard Arnold, Gianni Infantino, and Aleksander Ceferin would interest you.

If you find something that doesn’t look right in the Late Lorenzo Sanz’s Bio, please share it with us by commenting below. We’ll always value and respect your great ideas.