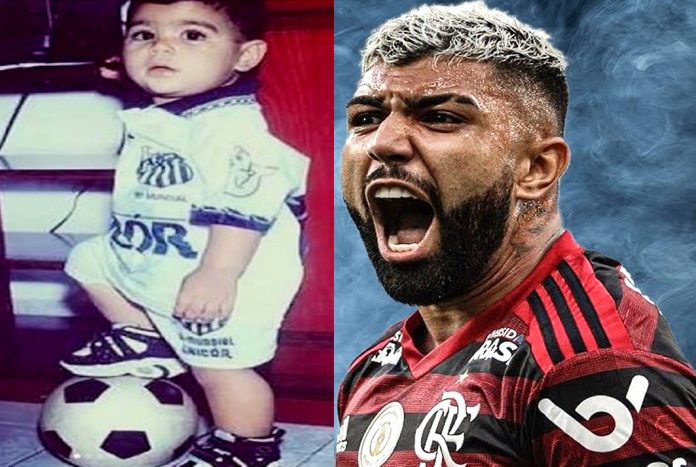 In a nutshell, we portray the history of Gabriel Barbosa, a Football genius with the nickname “Gabigol”. It begins his story by unfolding events from his early days to when Gabigol became famous as a soccer entertainer.

To give you a taste of the engaging nature of Gabriel Barbosa’s Biography, here is a pictorial summary of his life.

Yes, everyone knows about his goal-scoring form and technical skills. However, only a few consider Gabriel Barbosa’s Biography, which is quite interesting. Now, without further ado, let’s begin.

For Biography starters, Forward playmaker Gabriel Barbosa Almeida was born on the 30th day of August 1996, at the municipality of São Bernardo do Campo, on the outskirts of São Paulo in Brazil.

He is the first of two children born to his mother, Lindalva Barbosa and to his father, Valdemir Barbosa. Behold a photo of Gabriel Barbosa’s parents at the time of their union.

The amazing footballer of Brazillian nationality with Portuguese family roots was raised in a middle-class family background setting in the neighbourhood of Montanhão, in his birth municipality, where he grew up alongside his younger sister, Dhiovanna Barbosa.

Growing up in Montanhão young Gabriel had a football-loving childhood that was nearly marred by recurrent violence in the neighbourhood.

The unrest was sometimes very intense, that chaotic rhythm of close-range gunfire often sent the then little boy and his parents scampering for safety under tables and sofa.

Whenever Gabriel was not under the table or sofa he took to the streets to play football like most kids of his age. Backed with the loving support of his family, Gabriel began training on the indoor football sport called Futsal.

It wasn’t long before the then 8- year old began featuring in competitive futsal games for the junior side of his home club – Sao Paulo.

Thus Gabriel was invited to Join the youth systems of Santo FC, where he would spend the better part of his early career playing alongside his close friend Neymar Jr.

While at Santos, Gabriel shone as he rose through the Club’s youth ranks. By the time Gabriel reached his eight-year with the club, he had an astonishing record of no fewer than 600 goals and counting.

Such awesome prolific form earned Gabriel the nickname “Gabigol” as well as secured him a spot at Brazil’s junior side.

After much fanfare to Gabriel’s credit, the then coach of Santos, Muricy Ramalho invited Gabriel to start training with the club’s senior side.

Santos FC went on to tie Gabriel down with a long-term deal of € 50 million and happily watched him maintain form after he made his debut as a 16-year-old. 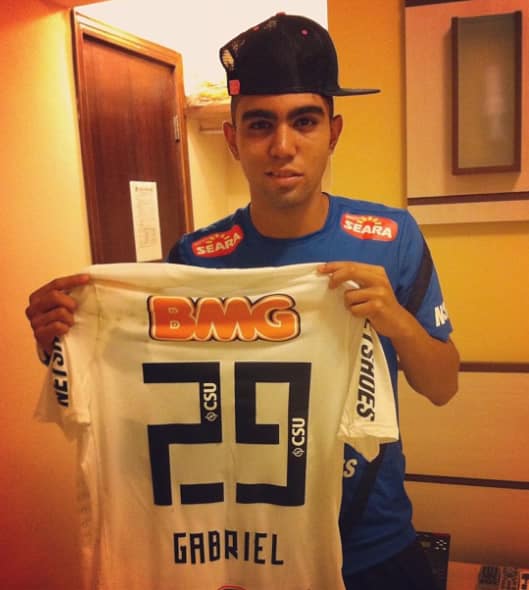 2016 was a mix of good and bad sporting years for Gabriel. To start with the good, he earned a call-up to join Brazil’s Olympic squad for Rio 2016 and helped the under-23 side win the gold medal for the first time in their history.

Following the Olympic Games, Gabriel secured a move to Inter Milan, where he futilely struggled to find his footing.

Inpatient with Gabriel’s poor form, Inter Milan loaned him to Benfica, where his struggles continued.

At the peak of Gabriel travails in Italy, fans and journalists rained barraged of criticisms on him, with some pointing out that he had become overweight and undeserving of his nickname “Gabigol”, which stood for prolific goal scoring. 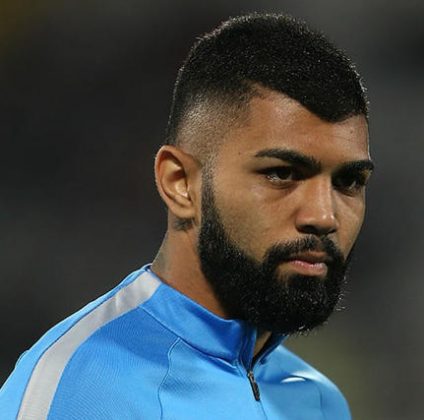 The Brazilian was eventually loaned to his boyhood club Santos, where he redeemed himself by becoming the top scorer in the 2018/2019 edition of the Brasileirão with 18 goals.

“Home sweet home”, Gabriel often shouted, as he couldn’t understand how he rediscovered his mojo.

The forward is, at the time of writing, playing on loan for Flamengo FC, where he partners well with Pedro Guilherme and has just scored 34 goals in 40 appearances!

What more? Gabriel has signified interest in playing for Premier League side Liverpool FC. Although there are titbits of uncertainty surrounding the planned move, whichever side of football Gabriel finds himself on would be history.

Away from Gabriel’s busy football schedule, he has an interesting love life that has seen him identified with Neymar‘s blood sister – Rafaella Santos.

The forward is not known to have had a public girlfriend before he began dating Rafaella in 2017.

They dated for just a few months before going separate ways but rekindled old flames in April 2019. None of the love birds has son’s or daughter’s out of wedlock while fans of their relationship hope that the duo take things to the next level by getting engaged soon. 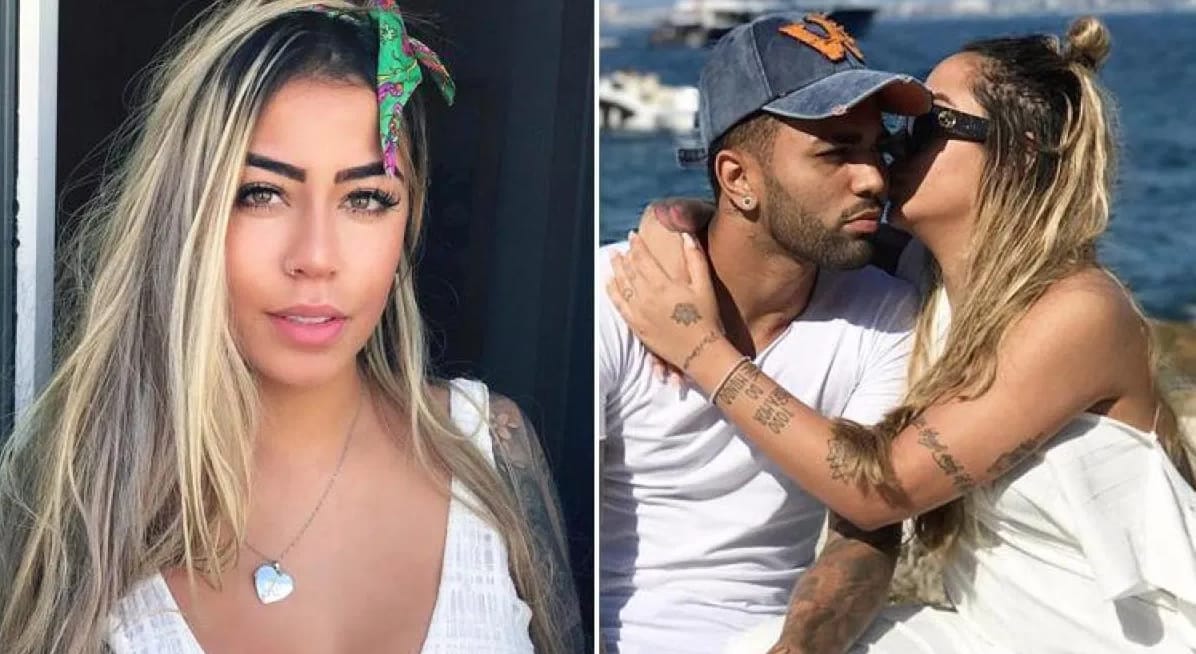 It takes a family to build a prolific striker like Gabriel. We bring you facts about Gabriel’s family life, beginning with his parents.

About Gabriel Barbosa’s father and mother:

The parents, who are of little family origin, introduced Gabriel to football at an early age and sometimes borrowed money to enable the playmaker go for football training.

They are proud of what Gabriel has become and often feature early life photos of him on their social media handles to tell his story.

Gabriel has no brother but a younger sister identified as Dhiovanna Barbosa.

Dhiovanna is an Instagram model who has an interest in learning foreign languages. She is extremely close to her older brother Gabriel that he got a tattoo of her to remind him that she’s always close no matter how far he journeys around the world.

Regarding Gabriel Barbosa’s ancestry and extended family life, little is known about his paternal grandparents while his maternal grandfather and grandmother have not been identified at the time of writing.

Similarly, there are no records of the playmaker’s uncles, aunts and cousins while he has no nephews or nices at the time of writing.

Personality traits that define Gabriel Barbosa are of Virgo Zodiac sign. They include his proclivity for gracefulness, harmony, competition, and creativity.

In addition, Gabriel possesses a perfectionist persona and moderately reveals details regarding his private and personal life.

Talk about Gabriel’s interests and hobbies, he has quite a number of pastime activities that include listening to music, singing, swimming, visiting beautiful beaches and spending quality time with his family and friends.

Although Gabriel Barbosa has a market value of €23.00 million at the time of writing. His net worth is yet unknown. This is owing to the fact that he earns little in wages and salaries as of December 2019.

As a result, Gabriel does not often live the luxurious lifestyle of accomplishment. Like players who possess expensive houses and ride in exotic cars.

However, he does have a decent convertible car and knows how to spend vacations at expensive resorts around the world.

To wrap up our Gabriel Barbosa Biography, here are lesser-known or untold facts about him.

He is probably one of the most tattooed footballers in the history of the sport. Gabriel has body arts on his back, hands, legs, and neck.

Notable among the tattoos are images of his parents, sister, and a lion with a ferocious mane.

Gabriel might not be vocal about his faith. But his tattoos, which reflect an image of Jesus, speaks volume about his religious affiliation. Our odds are in favour of Catholicism.

FACT CHECK: Thanks for reading our Gabriel Barbosa Childhood Story plus Untold Biography Facts. Asides from this memoir, we’ve got other exciting Brazil soccer stories for you. The Childhood story of Lucas Paqueta and Authur Melo would excite you.