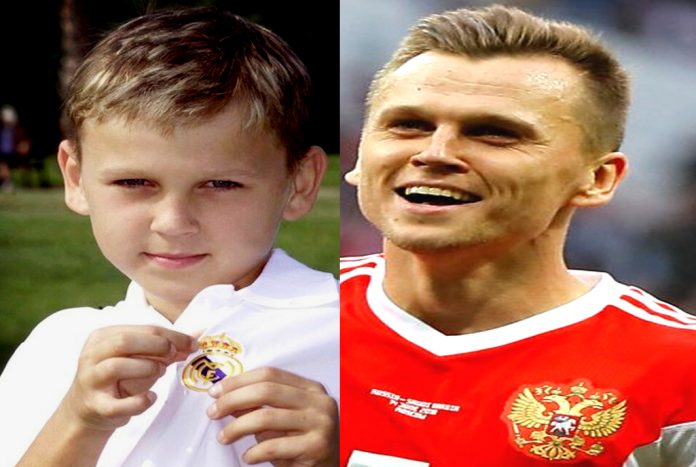 LB presents the Full Story of Russian Winger who is best known by the nickname; “2018 World Cup Hero“. Our Denis Cheryshev Childhood Story plus Untold Biography Facts brings to you a full account of notable events from his childhood time to date.

The analysis involves his life story before fame, family life/background, family origin and many OFF-Pitch facts (little known) about him.

Yes, everyone knows about his goals at the FIFA 2018 World Cup held in his home country. However, only a hand few fans know much about Denis Cheryshev’s Bio which is quite interesting. Now without further adieu, let’s Begin.

Denis Dmitriyevich Cheryshev was born on the 26th-day of December 1990 in Nizhny Novgorod, Russia. He was born to his father, Dmitri Cheryshev who was a former Russian footballer and now a manager.

Denis grew up with his younger brother Danila but spent a larger part of his childhood with his beloved father, unlike his mother. Below is a photo of both son and dad. 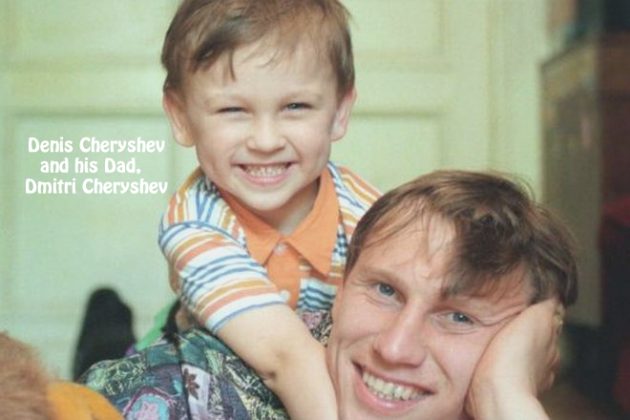 Since early childhood, Denis was sure that he would become a football player in future. Denis followed in the footsteps of his father and got fond of football. His father Dmitri Cheryshev, on the other hand, helped laid the necessary foundation needed to see his beloved son through his dreams which wasn’t a passing fantasy. Dmitri his dad was once a famous player of FC Dynamo Moscow before his permanent move to Europe. His stay in Europe influenced his family background.

When Denis was five years old, his father being a footballer got an offer from the Spanish club, Sporting de Gijón. Dmitri accepted this offer, he left Russia and moved to Spain with his family.

Upon settling in Spain, he observed the language barrier to be a major issue and challenge to his wife and sons, especially Denis who was to enrol into a football academy. Knowing how negative it could cause, Denis had to learn Spanish very quickly.

Little Denis had to attend a Spanish preparatory school where he learnt the Spanish language with his tutor. 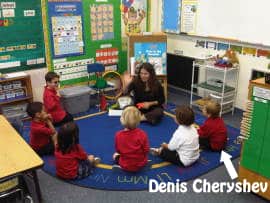 During the first several months, he could hardly understand a word in Spanish without the help of a translator.

Nevertheless, sometime later, little Denis got accustomed to the Spanish culture and learned how to speak the Spanish language fluently just as a native citizen does.

Sometime after the relocation and Spanish language training, little Denis began to attend sports school of Sporting F.C., for which his father was playing at that time. He was 6 years old when he joined Sporting Gijon academy, staying there until he was 9. 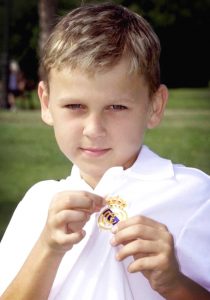 Denis Cheryshev was part of Real Madrid for 14 years, joining the club at the age of 12. In the youth club, he saw himself growing fast from a young teenager to an adult. 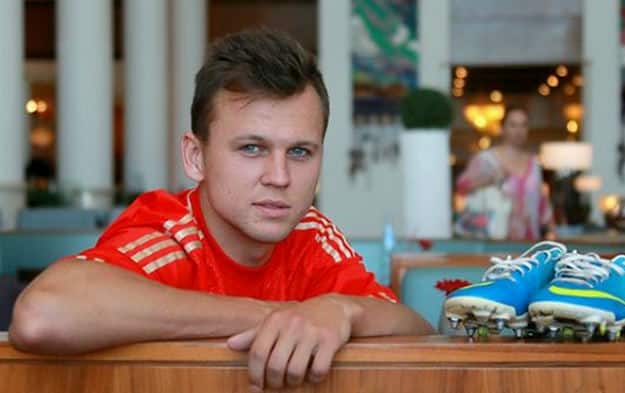 In 2009, Denis Cheryshev burst onto the scene with the B team and went on to score 22 goals in 109 games under the tutelage of Zinedine Zidane.  Back then, he was awarded as “The Best Shooter in the Real Madrid Youth Team.” Subsequently, he got promoted to the Real Madrid senior team.

Why he Left Madrid: Denis Cheryshev pictured below played only two matches for Real Madrid senior team before he started warming the bench due to stiff competition between senior and junior players. Below is Denis Cheryshev with the Real Madrid Senior Team. 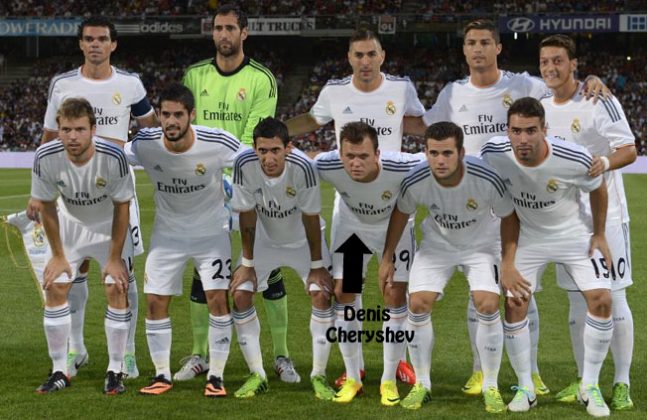 After painfully having zero appearances for months, Denis got frustrated with the club. In the process of buying first and developing second, Real Madrid, unfortunately, lost track of young Cheryshev. Denis’ request to leave the club was denied, leaving him with the option of a loan.

Denis found his way to thirty loan appearances to Sevilla, Villarreal and Valencia. He finally joined Villarreal after sealing a permanent deal in 2016. 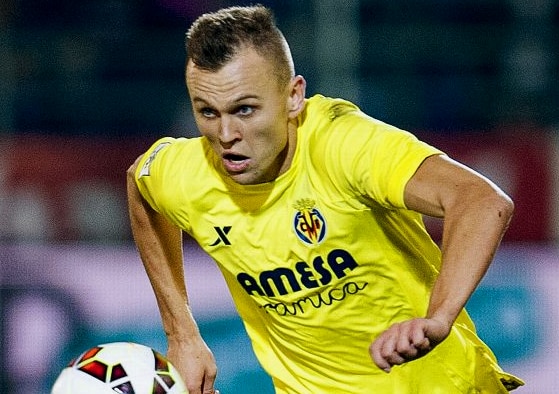 The Russia 2018 World Cup Fame: Denis Cheryshev got famous when he exploded in the 2018 FIFA World Cup. Without writing much, his rise to fame is summarized in the photo below.

The rest, as they would say, is now history.

Yes, he might not be as handsome as Fyodor Smolov pictured above with his ex-wife, but Denis Cheryshev sure enters the rating of 10 most desired Russian sportsmen and we give you the reason for this. 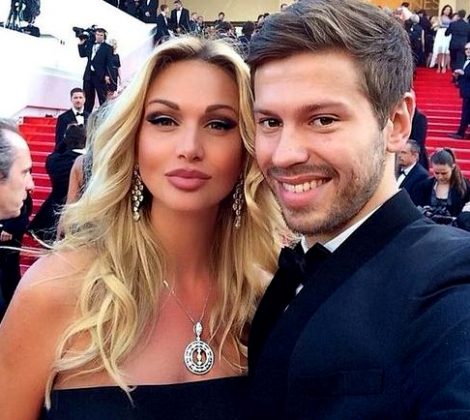 Talking about his preferences, only one lady meets Denis’ match. She is no other than Cristina Cobo pictured below with her man. Cristina and Denis have been in their relationship since 2016. 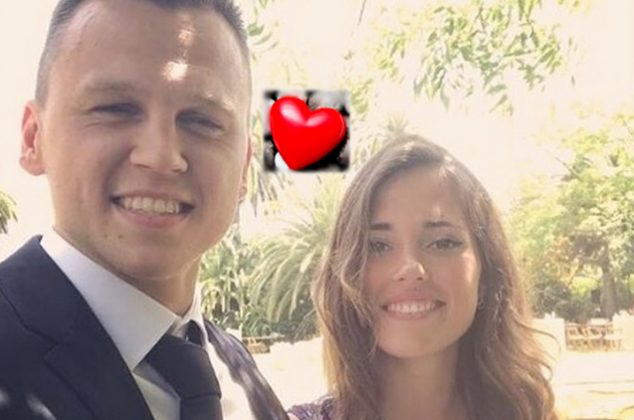 The stunning girlfriend and Russian beau of Denis Cheryshev studied at Madre Ventura Sagrado Corazon Castellon and the University of the West of Scotland before enrolling at the Universitat de Valencia where she met her man. Her beautiful twin sister Maria and her mum currently live in Span. 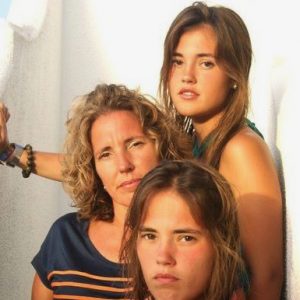 As at the point of writing, Cristina is presently is an attorney working at Arenal Sound in Borriana, a town in eastern Spain.

Denis is fond of continually publishes photos of his girlfriend, Cristina Cobo on his Instagram page. However, Denis hadn’t given any recent comments towards his future plans for Cristina.

Denis Cheryshev’s family isn’t the typical Russian type who are usually the homesick type and who don’t like venturing out of their comfort zone to begin new challenges overseas.

Denis Cheryshev belongs to that family whose stereotype is coupled with the belief that they can flourish in other countries except for Russia. Denis Cheryshev starting from his mother, father, brother, sister, uncle, aunty and other relatives have all learnt to be independent of the Russian system.

To make that belief stand, even Denis’ father, Dmitri Cheryshev retired from his professional career without any doubts to dedicate himself to the promotion of his son in football as seen in the photo below. 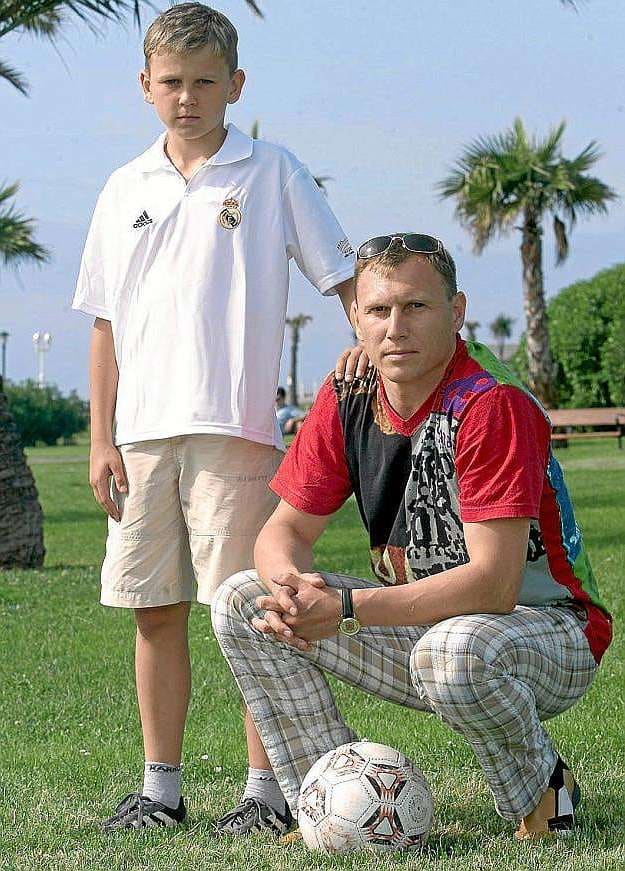 The aim was to keep him from being homesick. At some point in time, Denis’ father decided to become a football coach. This decision of his father was beneficial for the career of Denis. Below is a photo of Dmitri as a manager. 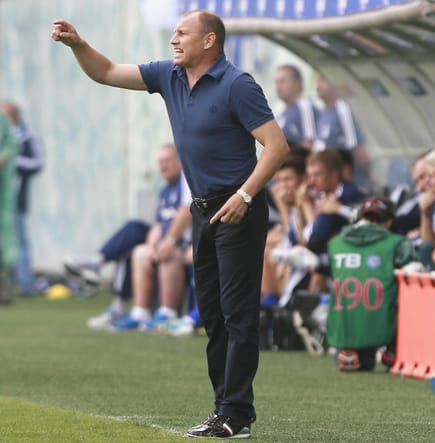 As far as Denis Cheryshev family is concerned, their final moment of wait for glory is finally over. Denis’ displays at the Russia 2018 World Cup has indeed brought a turning point to his career, personal life and family fame.

FACT CHECK: Thanks for reading our Denis Cheryshev Childhood Story plus untold biography facts. At LifeBogger, we strive for accuracy and fairness. If you see something that doesn’t look right in this article, please place your comment or contact us!.