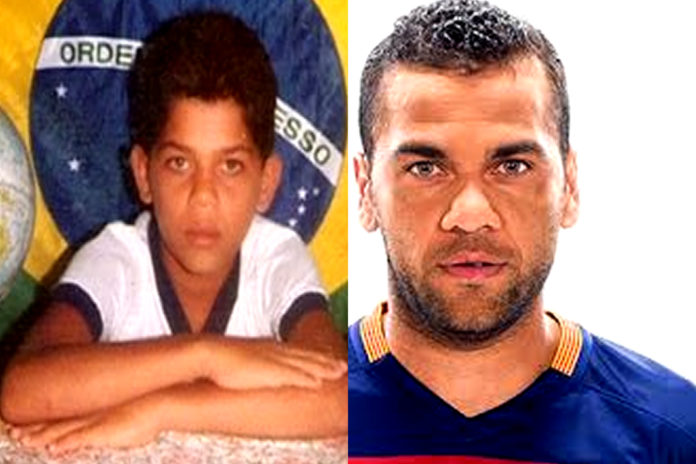 LifeBogger presents the Full Story of a Football Bull best known by the Nickname; “El Loco [the crazy]”.

Our Dani Alves Childhood Story plus Untold Biography Facts brings to you a full account of notable events from his childhood time until his moment of Soccer Fame.

The analysis involves his life story before fame, family life and OFF-Pitch Facts about him.

Yes, everyone knows about his on-pitch energies, but few consider our Dani Alves Biography, which is quite interesting. Now, without further ado, let’s Begin.

For Biography starters, Daniel Alves da Silva was born on the 6th day of May 1983 in Juazeiro, Bahia, Brazil. He was born to his mother, Dona Lucia (housewife) and father, Domingos Alves Da Silva (a farmer).

Dani Alves’ father, Domingos, explains that when Dani was a child, he was already different from the other kids in their neighbourhood. He was so full of energies as a child.

From an early age, Dani woke up with his father at 4 a.m and travelled with him to the farm to help him work in the fields of Salitre, a village located 30km far from Juazeiro.

When Dani Alves was very younger, he always found time for his greatest passion, which is playing football with his friends in the fields.

He played football with the neighbouring kids. Alves’ father had a passion for football as well and eventually managed to organize his own football team.

Alves, at age ten, started as a winger, but because of the lack of goals he scored, his father re-positioned him as a right-back, a position he continued for life.

Young Dani farmed and sold farm products to make monies for his youth career upkeep in Juazeiro and Bahia.

It was Sevilla who gave him the opportunity to play in Europe. The rest, as they say, is now history. 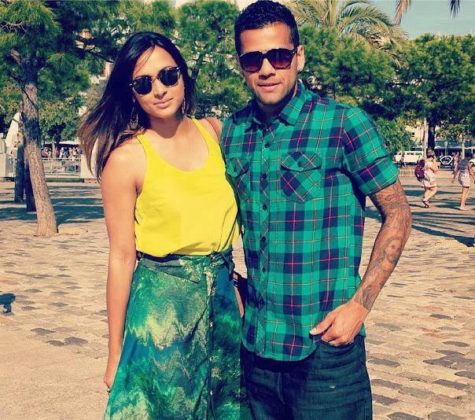 Both lovebirds decided to tie the knot in 2008. They have two children, Daniel and Vitória. 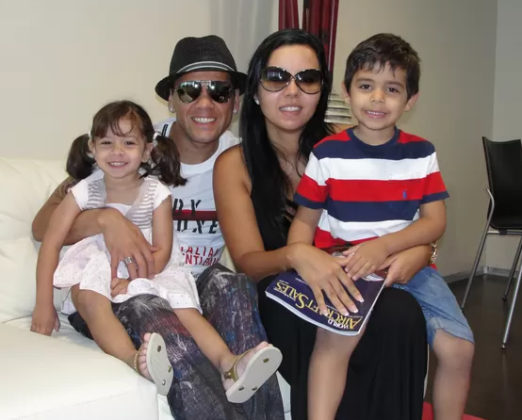 Their marriage lasted for just three years before the couple agreed to a separation and divorce in 2011.

The actual reason behind their divorce is to date not known. However, it was perceived that Dani Alves flirted with Brazilian Soap actress Thaissa Carvalho.

Carvalho has appeared in a number of programs on Brazilian TV and studied nutrition and nursing at Rio de Janeiro State University. Below is a photo of Dani and Thaissa. 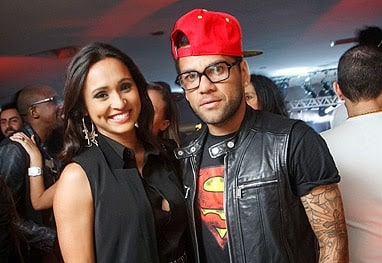 Dinorah chooses events, listens to club proposals and even takes care of her ex-husband when he is injured.

Indeed, would you let your ex-wife take care of your image? What about your professional life? Most men would probably shiver at the thought of this possibility.

For Dani Alves, it’s normal. Dani and Dinorah Santana da Silva are partners in five companies: two in Brazil, one in agriculture and one real estate company, and three in Spain

(1) Another “real estate company” (2) “Cedro Esport”, which looks after the image of the player, and  (3) “Flash”, a company which manages athletes).

They are also neighbours, live in very close streets, and she, as an attentive businesswoman, takes care that the client is always in the best conditions.

I’m a half-sister, half mother”….says Dinorah the so-called ex-wife. For Dinorah, the biggest reason for her proximity to her ex-husband is not the companies, but the two children: Daniel and Victoria.

In June 2017, Dani Alves decided to make the decision of remarrying. He married Spanish model Joana Sanz (10 years his junior) in a secret wedding in Ibiza.

Joana Sanz is a fashion model by profession. It was a romantic ceremony on the Spanish island, with the former Barcelona right-back choosing to wear a white suit to match his beautiful bride. 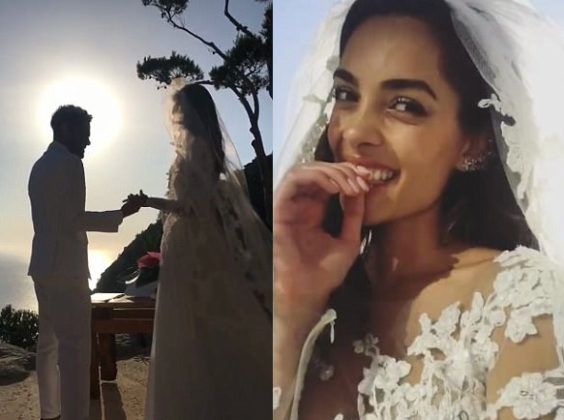 Alves’ wedding ceremony was held as discreetly as possible but a few guests and the bride shared pictures of the event on Instagram.

Dani Alves originally came from a poor family background before the football opportunity brought to him by his father became a game-changer. Domingos Alves Da Silva still serves as a coach to the club that raised his son.

Mr Domingos Alves da Silva, the father of Dani Alves, was recently appointed as the Base Soccer Manager of the club, Juazeiro Social Clube.

The Alves family is very proud of their head, who made him be interested in football and following the Brazil national football team from a young age. 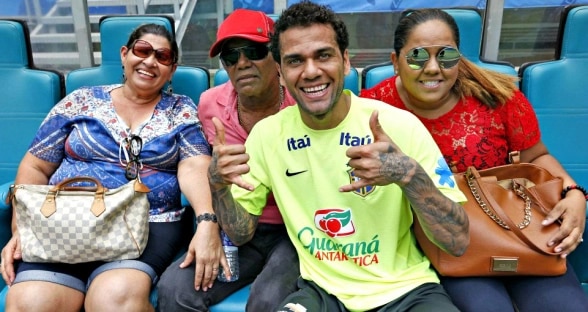 Daniel Alves da Silva loves to be accompanied in the training sessions of the Brazilian National Team in Salvador by three very dear fans: Maria Lúcia, his mother, Domingos, his father, and Lucivânia, his sister.

Below is a photo of Dani Alves mother, Dona Lucia who loves him very much. 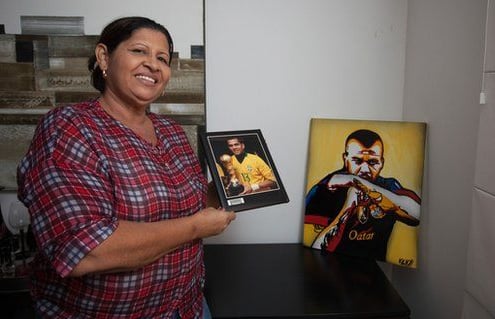 Alves has the following attribute to his personality.

Dani Alves Strengths: Dani is fun to be with, reliable, patient, very practical and well-grounded.

Alves Weaknesses: Dani could be stubborn, possessive and uncompromising.

What Danni Alves likes: Gardening, cooking, music, romance and working with his hands

Dani Alves is someone who would work so hard to harvests the fruits of his labour.

He feels the need to always be surrounded by love and beauty, turned to the material world, hedonism, and physical pleasures. Dani is sensual, tactile and considers touch and taste as his most important of all senses.

Alves is an epitome of a playful father.

With Dani Alves involved in any team, South American traditional dances must be done during celebrations.

Dani Alves once did this to C Ronaldo.

Dani identifies with his dance partner and best friend, Neymar.

On 27 April 2014, during a match at Villarreal’s stadium, El Madrigal, Alves was targeted by Villareal supporter David Campaya Lleo, who threw a banana at him.

Alves picked up the banana, peeled it and took a bite. He responded to the incident by saying:

“We have suffered this in Spain for some time.

You have to take it with a dose of humour.

We aren’t going to change things easily. If you don’t give it importance, they don’t achieve their objective.”

Teammate Neymar‘s response – to post a photograph of himself on social media also eating a banana – went viral. Other footballers have also since taken photographs of themselves eating bananas.

Alves said that whoever threw the banana at him should be publicly shamed, and on 30 April 2014, a man was arrested in connection with the incident. Villareal was later fined €12,000 for the incident.

Alves had previously been subjected to racist taunts in Spain. He complained of racial abuse after being taunted by monkey chants during a Copa del Rey semi-final at Real Madrid in 2013.

FACT CHECK: Thanks for reading our Dani Alves Childhood Story plus untold biography facts. At LifeBogger, we strive for accuracy and fairness. If you see something that doesn’t look right in this article, please place your comment or contact us!.