LB presents a Full Story of a Football Genius best known by the Nickname; “Marcelinho”. Our Lucas Moura Childhood Story plus Untold Biography bring to you a full account of notable events from his childhood time to date.

The analysis of the Brazilian Football Legend involves his life story before fame, relationship life, family life and many OFF-Pitch little-known facts about him.

Yes, everyone knows about his abilities but few consider Lucas Moura’s Biography which is quite interesting. Now without further adieu, let’s Begin. He was born to his mother, Maria de Fátima da Silva Moura (a former athlete and professional hairdresser) and father, Jorge Rodrigues (a civil servant).

Lucas was born and brought up in a Catholic background. His parents made him attend Our Lady of Aparecida, in Moema, São Paulo. This is the same church they got married. According to Catholic requirements, Little Lucas was baptized at the age of 3. This was the age his parents enrolled him in school. Also at this time, the pre-defined quest to play football started.

According to Lucas’ mum Fatima, her little baby had already started kicking in her womb just three months into her pregnancy. This was a time she knew a Brazilian footballer was coming to the world.

When Lucas was five years old, he was already at Marcelinho Carioca’s school of soccer where he remained for six months. This was according to his parent’s plan of making him move between clubs to gain experience.
After turning six years old, his parents took him to play indoor soccer at a club called “Clube Santa Maria,” in São Caetano do Sul, a town in São Paulo metropolitan area.
As there were several other kids with the same name, Lucas then received a nickname and began to be called “Marcelinho” due to his slight resemblance to the Corinthians’ ex-player.
There he stayed for a year and a half. At this club, he met coach Dirceu Gabriel Couto (pictured below), who he considers an important person in his life.
He was his first mentor and coach. It was Clube Santa Maria that gave Little Lucas his first trophy as seen below. He was only 6 years old at this time. She is the wife of Lucas Moura. Larisa Saad is the pretty lady behind Lucas Moura’s love life and love story.

She is a business administrator, a top Brazilian model and a heavy Instagram user known for posting stylish selfies of herself, family and friends. This has earned more than 147,000 followers. Lucas Moura and Larisa SaadLarisa are from Sao Paulo where she met Lucas. She has been living with Lucas in Paris one year after his arrival to PSG.

Before they started dating, Larisa “dribbled” Lucas for over 1 year. Understand Why…

The young lady met Lucas through a mutual friend, the lawyer Thiago Nicácio, who works with the player in Paris.

Lucas soon became interested, but she did play hard since the family had some restrictions because was a soccer player.

He had to fight for her. It took him over 9 months to get acceptance of Larisa’s mother, Graciela.

The most important day in the life of Lucas was held on Friday, December 23, 2016. It was the day he got married to his sweetheart Larissa Saadou. 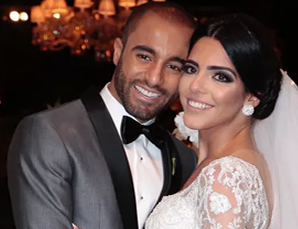 Lucas Moura Wedding PhotoHis wedding ceremony had over 600 guests. The ceremony was seen by friends of Lucas Moura’s: partner in the club, Marquinhos, as well as two other famous Brazilians Kaka and Nene.

In Lucas Moura’s words- “It’s a different emotion from everything I’ve ever felt, a whirlwind of emotions.

I’ll never go through so much in my life, nor in a game final. I have not been sleeping. I have been restless and anxious for a week.”

It was sure that Lucas had plans to start having children. It took no time before Larisa got pregnant. He was at the hospital to witness the delivery of his child.

This happened in early November 2017. Lucas Moura celebrated becoming a father just nine months after a 4-0 win over Barcelona. What a lovely husband and father!

At seven (and half) years old, Lucas was invited to play for Juventus (Not Turin), a soccer team from Mooca (a district of São Paulo). He went on to play for them for 2 years. Photo of Lucas Moura at JuventusBelow is 7-year-old Lucas with his coach holding a trophy he just bagged at Juventus.

This success led to scouts of big Brazilian clubs circling him like sharks. Lucas went on to play for Corinthians.
Initially, 10-year-old Lucas started playing for Corinthians as a happy border. Below is a photo of him and his best friend.
It didn’t take long before a problem arose as explained below.

Lucas Moura Biography Facts – When the Going Gets Tough:

Lucas was subjected to harsh living conditions as regards his club’s daily routine and his personal management.

With classes in the morning and soccer workouts in the afternoon, his life had become quite complicated.

Having to take a bus and two subways to go to the club (as well as to return to the club hostel), his energies were greatly affected.

The situation was almost turning unbearable. This was when his parents reacted.

His parents, however, didn’t like Lucas’ daily routine, fearing a drop in his activities, both as a student at school as well as an athlete at the club.
Fatima, his mother had to come to take care of Lucas’ affairs related to his studies while his father, Jorge got responsible for his compromises related to football.
Lucas was then a frail boy and needed special cares. His relationship with Corinthians began to get complicated when his parents asked the managers for a nutritionist.
The aim was for Lucas to gain muscle mass and also housing at the club, so as to facilitate his routine, but they reluctantly refused to help the boy. This made his parents pull him out of the club.

With the end of his agreement with Corinthians, São Paulo FC contacted Mr Jorge (Lucas’ father) and invited him to visit the training centre located in Cotia, a small town located 34 kilometres (21 miles) far from São Paulo.
He reveals he liked what he saw there and decided to take Lucas to the club, even because it would favour him in the daily routine of his studies and training.
Lucas was then nearly 14 years old and remained there until he turned 18 years old.
Opposite to the treatment he had received from the leaders of Corinthians, São Paulo FC gave Lucas all the proper conditions which were fundamental to his personal and professional development, supporting him in his career.
The results of changing the atmosphere were almost immediate. The boy grew taller and stronger and his football improved considerably.
The convenience offered by São Paulo to transport him to school, as well as the accommodations at the same location of training meant much less physical wear, and Lucas could yield much more in his workouts and games.

The club would soon gather the benefits of its investment in the player. In 2010, Lucas became a champion of the “Copa São Paulo de Futebol Júnior” (São Paulo Junior Soccer Cup) – and was the highlight of the competition. It was at this time the young star eventually got tired of getting called ‘Marcelinho’ and requested to be called just ‘Lucas’, as Marcelinho Carioca is one of the biggest idols of São Paulo’s arch-rivals Corinthians.
Being called “Marcelinho” bothered Lucas. He once said, “I don’t want to be compared to anyone and I want to have my own history in the world of football.”
On September 16, 2010, the name Marcelinho ceased to exist and then was born soccer star Lucas, now known as “Lucas of São Paulo,” on a terrible night for his group which was beaten by 1-3.
Lucas started to have better opportunities to play and, with his notably professional improvement, became more requested by the press and the subject of discussions between the presidents of Corinthians and São Paulo FC.
The renewal of his contract with São Paulo FC took place in February 2011 and it goes until the end of 2015.

His first big competition at Brazil’s national team was the South American Under 20 Championship in January 2011, which Brazil won.

He was one of the key players in that team alongside Neymar. He is arguably the most promising player to come from São Paulo’s academy since Kaká

READ FULL STORY:
Erik Lamela Childhood Story Plus Untold Biography Facts
While Lucas took part in the Olympics, his managers had talks with Paris Saint-German about his transfer to the French team.
On August 8, he was officially announced as the newest PSG‘s midfielder and that he’d begin to play in France in January 2013. The rest, as they say, is now history.

FATHER: Jorge Rodrigues da Silva is the father of Lucas Moura. He was born on July 31, 1966 (Leo), just one day after England was crowned champion in the FIFA World Cup that year.

As revealed below, his second son, Lucas looks very much like him. Thou, he took his mother’s skin colour. According to Jorge, “Lucas does not complain neither does he spare a moment of relaxation. The favourite companion is with family and friends. Lucas is more than accustomed to the spotlight.”

Lucas’s father was the only parent who didn’t allow Corinthians to mistreat his son through their harsh standard of living conditions.

He protested and insisted his son isn’t a mercenary while other kid’s parents got silent.

According to Jorge Rodrigues da Silva, providing education, the right nutrition, housing and recreational activities are pre-requisite to good football.

He is ever grateful for São Paulo FC on how they helped his son fulfil his dream.

MOTHER: Her name is Maria de Fátima da Silva Moura. The mother of Lucas Moura was born on February 5, 1968. She is said to have Muslim roots as seen in her name ‘Fatima’.

She lived and worked in São Paulo as a professional hairdresser, in one of the trendiest districts of the capital, Moema. Below is a photo of her and her little child, Lucas. When Fatima was then only 17 years old, she went to visit her uncles in the State of São Paulo. It seems she was destined to meet a handsome young man, who was then only 19 years old.

Being introduced to each other by her cousins, who were his friends, Jorge and Fatima soon fell in love and eventually got married one year and a half later, on January 16, 1988.
BROTHER: From this union was born on March 22, 1990, their first son, Thiago Moura. He is Lucas Moura’s elder brother. Lucas has his own motto which is “I want, I can, I get it.” He is endowed with an enormous will to win, with a great character inherited from his family excellent background.
He’s very intelligent. He is a cheerful lad; extremely careful and attentive to his fans who line up to get his autograph wherever he is.

Lucas stills remember remarkable moments where he faces one of the great idols of his life, the attacker Ronaldo Luis Narazio de Lima. In Lucas Moura words…“It was an unforgettable experience. I remember when I was a kid, I watched him play too much and win titles on television. I’m glad to know I finally faced him”.