LifeBogger presents the Full Story of a Football Legend best known by the Nickname; “The Architect”.

Our version of Andrea Pirlo’s Biography Facts, including his Childhood Story, brings to you a full account of notable events from his childhood time to date.

The analysis of the midfield magician and Italian Football Legend involves his life story before fame, family life and many OFF and ON-Pitch little-known facts about him.

Yes, everyone knows about his abilities, but few consider Andrea Pirlo Biography, which is quite interesting. Now, without further ado, let us begin.

Italian Football Legend, Andrea Pirlo, was born on the 19th day of May 1979 in Flero, Italy. He was born to his mother, Livia Gatta, and father, Luigi Pirlo. The Italian is one of two children along with his brother Ivan and sister, Silvia Pirlo.

Pirlo was a football protégé as a child. Growing up, he used to play with his brother and friends on the sand in the seaside resort Viareggio in Tuscany, where his family went for holidays.

Asides from the holidays, he spent the rest of his childhood in the province of Brescia. This was where his football talent got developed.

Pirlo began his club career as an attacking midfielder with his hometown side, Brescia. He drew international attention for the first time at 13, when he and his team, ‘Voluntas Brescia U15s’, took part in the 1992 ‘Dana Cup’.

They made it to the semi-finals before being knocked out. Below is a shot of him making his debut.

Below is a very young Pirlo picking up his first silverware as part of Brescia’s youth team. H progressed up the ranks which got him a senior spot in the team. Pirlo helped his team to win the Serie B title and obtain Serie A promotion in 1997.

As a young chap, having endless training was the order of the day.

His coach Francoonce once said....“When we finished training, I had to cut off the power to make Andrea go home, or he’d have practised all night long!” Pirlo gave in all the best and saw results. His promising performances led to a move to Internazionale in 1998. Pirlo while at Inter struggled to gain playing time at his new club, because of his lack of pace, as well as heavy competition with other players in his position. Hee was subsequently sent on loan in 1999.

Despite successful spells with Reggina, and Brescia once again, Pirlo was still unable to break into Inter’s starting line-up and was sold to cross-city rivals AC Milan in 2001. At Milan, manager Carlo Ancelotti decided to shift Pirlo in front of the defence as a deep-lying playmaker, which allowed him more time on the ball to orchestrate his team’s attacks.

Pirlo excelled in his new role and soon developed into a world-class midfielder, playing a key role in Milan’s subsequent successes.

In 2011, he left Milan after coming to a mutual decision with the club. He joined Juventus on a free transfer.

Before Pirlo came to Juventus, the team had been trophy-less since 2003.

Pirlo himself retains a stake in the family business. Below is a picture of him and his dad, Luigi Pirlo.

With regard to his wealth from his family business and footballing career, Pirlo stated in an interview with Italian Vanity Fair magazine that he never talks about money.

In the year 1999, Andrea Pirlo fell in love with Deborah Roversi during his time at Inter Milan. 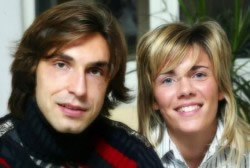 It was a period he endured the most difficult time in his playing career. A time he was shipped back on loan to Reggina and Brescia.

In a bid to focus more on his personal life, both Pirlo and Deborah decided to get their marriage in 2001 in their hometown of Flero in Brescia. 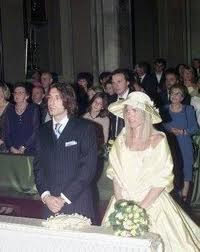 Pirlo’s career improved after their marriage. Two years after their ceremony, both had their first child.

Pirlo and Deborah endured difficult times for years. Pirlo wasn’t particularly too happy. Thou he was used to keeping his calm. Soon, their relationship got soured as both distanced themselves even in public. In 2014, Pirlo and Roversi divorced after thirteen years of marriage, following Pirlo’s affair with Valentina Baldini, a woman he met at his golf club. Both of his kids ( Niccolò and Angela) have learned to love and accept Valentina as a stepmother. Below is a picture of them having a nice time in Miami, US. Andrea Pirlo’s girlfriend, Valentina, gave birth to twins on the 10th of July, 2017. She announced this on her blog. The twins are called Leonardo and Tommaso.

Pirlo is known for being a wine connoisseur. Just like Andres Iniesta, Pirlo is a big boy in the wine business.

Pirlo has a large wine vineyard in Italy, which produces around 15–20,000 bottles a year. Pirlo could drink wine in his vineyard all day.

Pirlo admitted in his autobiography ‘I think therefore I play’, that he considered jacking it all in after Liverpool’s astonishing comeback against his Milan in the 2005 Champions League final. In his words…‘I thought about quitting because, after Istanbul, nothing made sense anymore.

The 2005 Champions League final suffocated me. I glimpsed the end of the line: the journey was over. The story was finished and so was I.’

Within 13 months, he was a World Cup winner. Within two years, Pirlo avenged that defeat when Milan beat Liverpool in Athens.

Avenging Liverpool was his second Champions League win, the first coming against Juventus in 2003. Hmmm……What a loss it would have been if Pirlo had been true to his word. Now, almost unthinkably, the bearded beauty has revealed he is finally hanging up his boots. His wine is infused with the musk of his powerful beard.

Without a doubt, Pirlo is one of Europe’s Most Marketable Footballers in the world. He has once featured in GQ’s fashion shoot wielding an axe. Fellow players on the Italian national team have nicknamed Pirlo “the Architect” because of the way in which he builds plays and sets up goal-scoring opportunities with long, lobbed through passes.

He inherited his nickname “the metronome” whilst playing at Milan, for the way in which he influenced games by controlling the tempo of his team’s play through his direct and efficient passing game in midfield, as well as his ability to make himself available to teammates to receive and distribute the ball.

In recent years, Juventus fans also dubbed him “the professor”,  “Maestro”, and “Mozart”.

They’ve regarded him as one of the greatest ever exponents of this position, due to his vision, ball control, creativity and passing ability.

Andrea Pirlo Biography – One of the most loved:

There are plenty of great footballers. Then, above them, there is that exclusive band of players with the genius who have commanded universal respect and appreciation. Pirlo almost joined English Giants Chelsea back in 2009 hoping to work under former coach Carlo Ancelotti. However, AC Milan’s president intervened and he stayed with the Italian Club for two more seasons.

Pirlo, in a quote, believes the PlayStation is the second-best invention after the wheel. He reportedly spent the afternoon of his 2006 WC finals playing on the PlayStation. He would often play with his Italian teammate for hours. Paul Scholes was the only English Midfielder Pirlo feels is the greatest in English history.

According to Andrea Pirlo, “The only great English midfielder in my career was Paul Scholes. He had elegance in him. Others were pretenders”

These pronunciations were made by the Italian Legend saw the pictorial statistics below. The statistics above are perhaps, ‘a food for thought’ for football pundits and Manchester United fans worldwide.

It will present a piece of good case evidence for those who would want to compare the three great midfielders. Frank Lampard is an exception to this case.

May 3, 2022
SUSBSCRIBE TO LIFEBOGGER STORIES!